Our route in Ecuador

This article was previously published in a Dutch cycling magazine. It tells the story of our 1993 bicycle trip to Ecuador.

The republic of the Equator

While the plane was descending to Quito for a brief moment I thought I could see of the equator. Of course I knew it’s an imaginary line but if they name a whole country after it, it could be more substantial. After we had assembled our bicycles we cycled our first 15 km through the rush hour traffic of Quito. Every man, women and child, there are more than a million people living in this city, seemed to be traveling in one of the hundreds of noisy and ramshackle city busses. At busy intersections the air was blackened by their exhaust fumes.

Why cycling in Ecuador, friends asked me. Well, it’s a small country, so even on a bicycle you can see a substantail part of it in just 4 weeks traveling. Furthermore it’s cheap and safe to travel in Ecuador. There is a wide variety of landscapes, animals en plants. E.g. in Ecuador there are more species of birds then in the whole of North America. In Ecuador you can climb the highest active volcano in the world but also try your luck in catching piranhas. 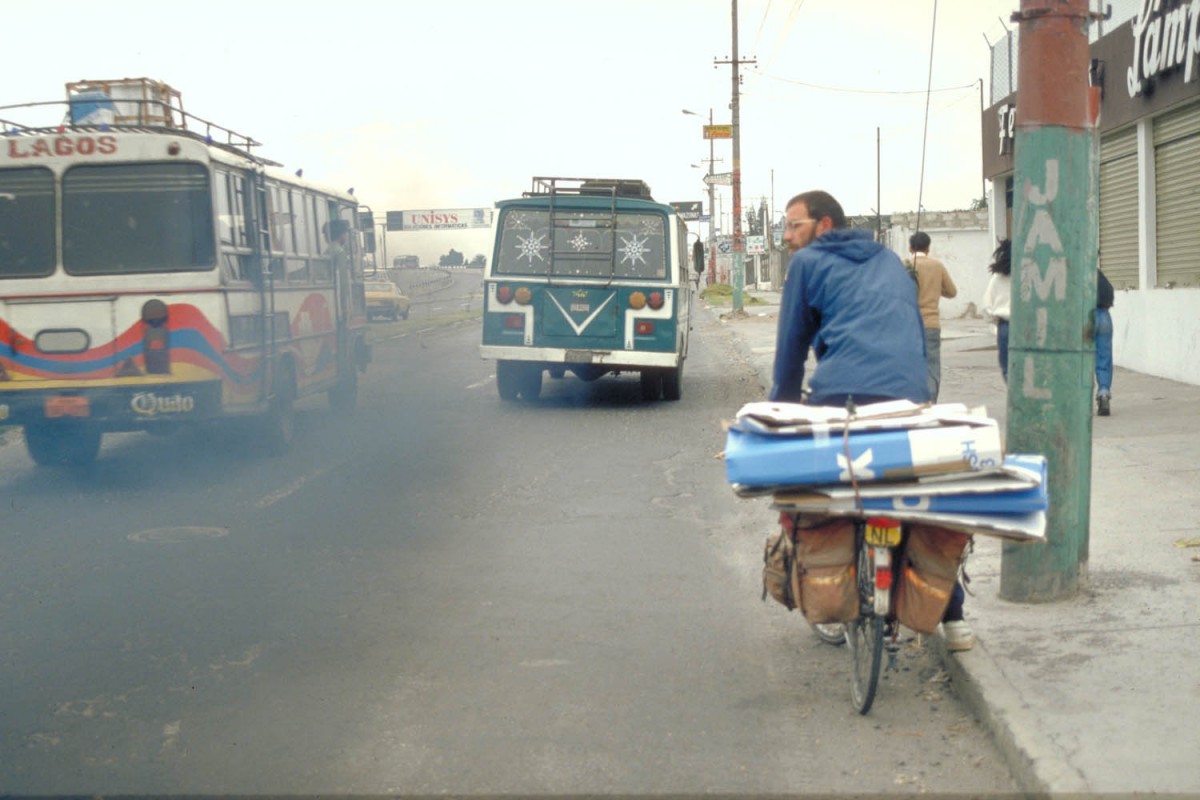 Just arrived in Quito; the big cartons are the KLM bike boxes which we stored in a local hotel and used again on the flight back

Since Quito is located at 2850 m above sea level we had planned a day or two to adjust ourselves to this altitude. We started with a visit to the old colonial city, with its delightful white painted Spanish style buildings and its gold covered churches. This part of town is a UNESCO World Heritage Site. It’s worth a visit but watch out for those pickpockets and bagslashers. 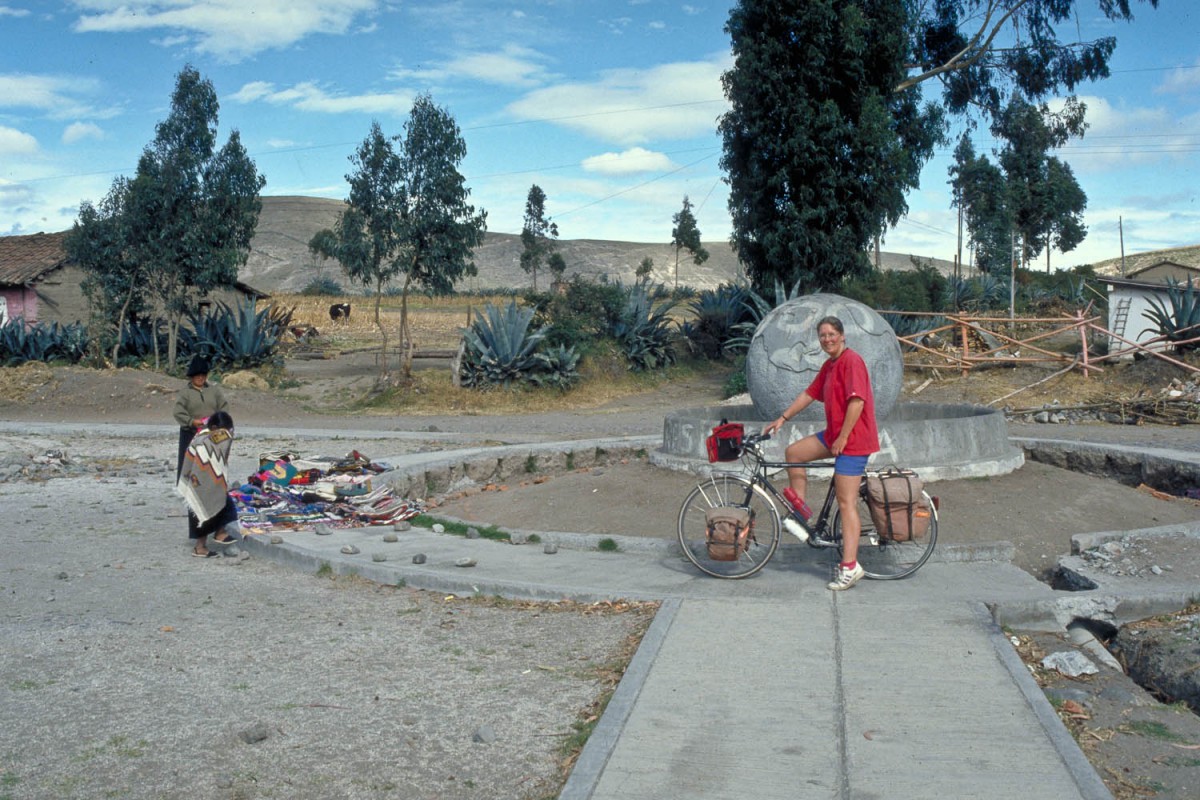 Another day brought us 25 km north of Quito to a place called Mitad del Mundo. Here you can see and touch the equator.

Hop back and forth the line a dozen of times and tell your friends at home: “Oh the equator? I’ve crossed it a dozen times!”.

We continued further north to a small town called Otavalo. Otavalo is one of Ecuador’s major tourist destinations because of its Indian Handicraft Market. All the locals wear traditional costumes; these are not just put on for tourists but worn on a daily basis. The local Indians are famous for their weavings. One can buy beautiful tapestries, sweaters, woven bags etc. at low prices; you will have to bargain.

Turning back to Quito we started cycling south. In this direction the Pan American Highway carries much more traffic. Bus en truck drivers proved to be friendly people, making wide curves around us. The cycling was strenuous but beautiful; on clear days we could see several of the numerous volcanoes that flank the highway. Cotopaxi , the highest active volcano in the world is just a day cycling south of Quito. A very rough and steep dirt road brought us to an elevation of more than 3600 m. We had spectacular views of Cotopaxi’s snow-capped cone and the surrounding countryside.

A couple of days later we had to say goodbye to the highlands. Our next destination was the Amazon Basin. The 80 km descent to the jungle is spectacular. First the road is wide and paved but beyond the town of Baños the valley narrows and the highway becomes an unpaved track cut out of the mountains. Small waterfalls are splashing on the road and more than once we had to wade through small streams crossing the road. During the rainy season this road is often blocked by landslides. With every kilometer we descended the vegetation became greener and more tropical. Orchids and giant fern trees grew along the road and we saw the first hummingbirds. Just before our destination, the small jungle town of Puyo, the canyon widened and we had good views of the Amazon jungle below us. The waters of the river that was flowing below us would finally reach the Atlantic Ocean, more than 4000 km to the east! Beyond Puyo the road became increasingly bad. Potholes and rocks slowed our speed significantly. Most of the day we did not average more than 10 km per hour. So when an Ecuadorian family in a 4X4 truck stopped and offered us a ride to Puerto Missahualli, our next destination, we gladly accepted. 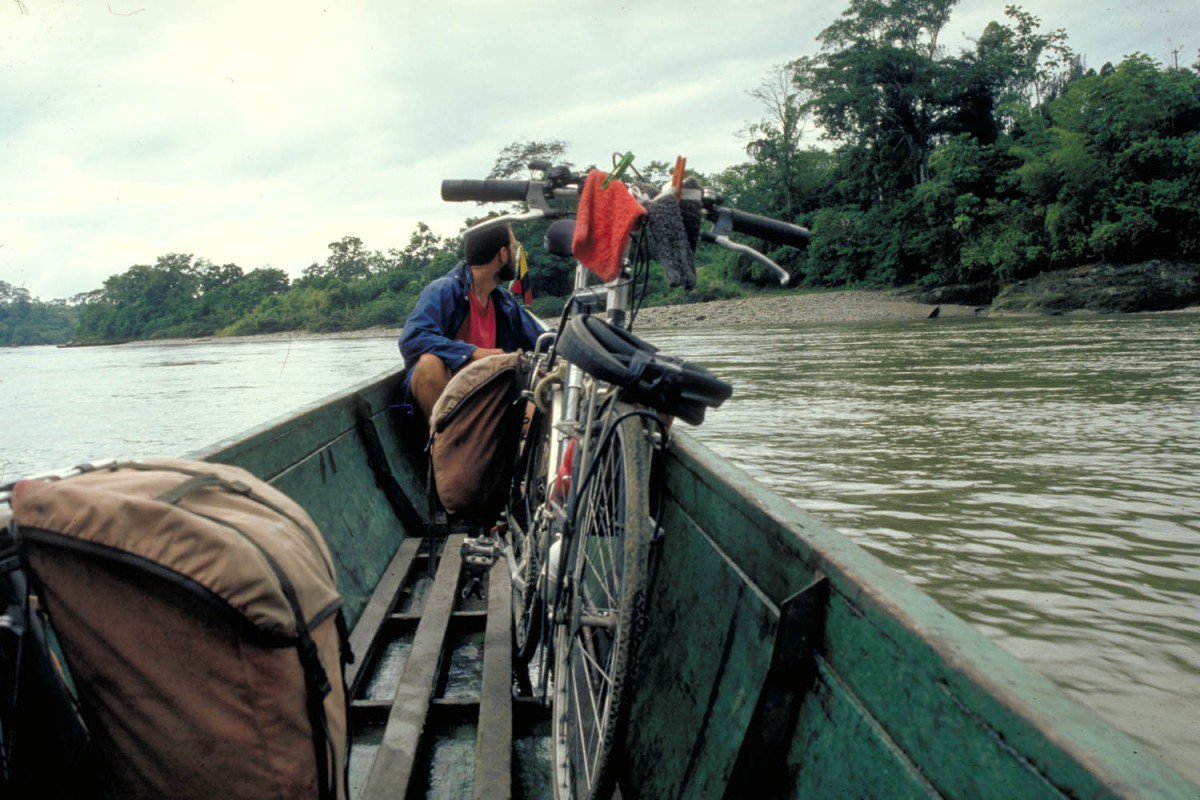 crossing the Rio Napo in a canoe

Puerto Missahualli is only a small village located at the end of a dead end dirt road into the jungle. It’s the major jumping off point for organised tours into the rain forest. We hired a canoe to cross the Rio Napo and continued on another jungle road to have our own private jungle tour. Although this area has been colonised for years tropical wildlife and plant life is still abundant. We saw multicoloured birds, snakes, orchids and Morphos, bright blue butterflies with a wingspan up to 15 cm. 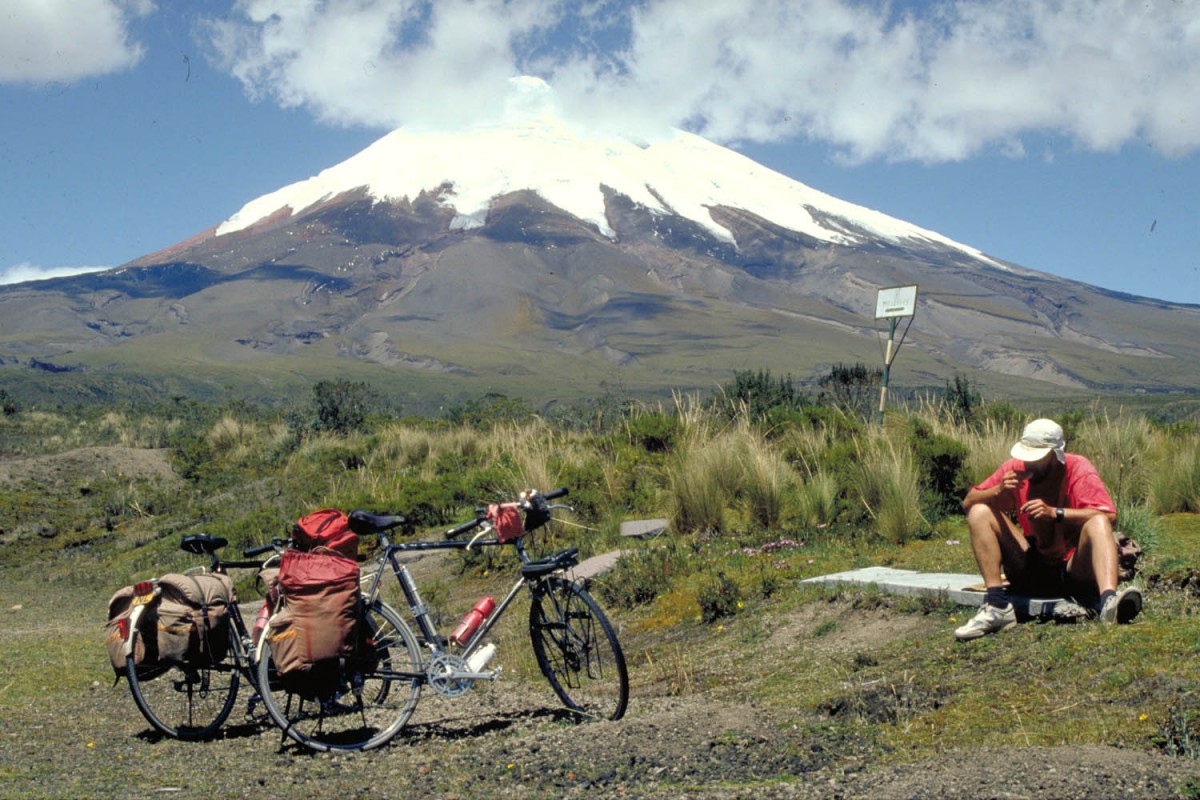 end of the road up the Cotopaxi

Our map showed us that the unpaved road back to Quito was not going to be an easy one. Coming from an elevation of just 400 m above sea level we had to climb to very rim of the Andean highlands, at over 4000 m. 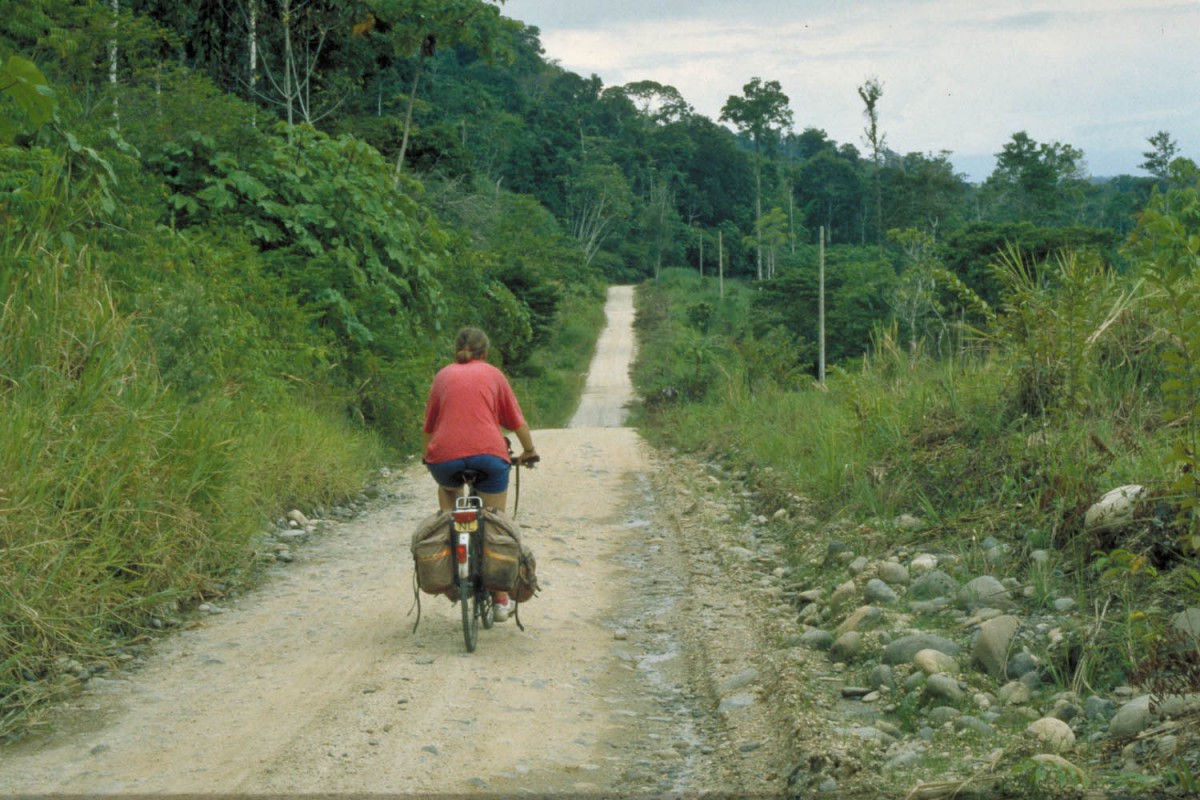 Fortunately there were places to sleep and eat along the way up and the unpaved road proved to be in an excellent shape. At 3300 m there is the small village of Papallacta, famous for its ‘aguas thermales’: a perfect place to relax after a day of tough cycling. After the ‘hot springs town’ the road became much steeper, trucks and buses were creeping past us using their lowest gear.

We had to stop frequently to catch our breath since the air is noticeably thinner at this altitude. We spent the whole morning cycling only 15 km to the top at 4100 meter above sea level.. The remaining 50 km back to Quito were mostly downhill on an new paved road.