We followed part of the so-called Mawson Trail . This is a fully marked trail that runs from Adelaide to Hawker in the Flinders Ranges. About 800 miles on mostly unpaved roads .

From the Flinders Ranges , we rode back south. Almost exclusively on quiet dirt roads . In tThis area you ‘re always in a small village at the end of the day . Everywhere there are shops and campsites.

Our second destination was the area around the Murray River . Many facilities here because half South Australia is on holiday here . Beautiful flora and fauna here . It is also the region of the citrus – cultivation.

From the Murray we cycled back to Adelaide in a straight line . All in all a nice trip ; varied but apart from the Flinders Ranges no spectacular natural and cultural attractions .

For detailed information about this trail on the website of the Dept . or Recreationd Sports. The signs of this trail is good, sometimes missing a pole but with excellent maps you can not actually go wrong. We noticed that with a heavily laden touring bike with 32mm tires it was sometimes hard to follow . 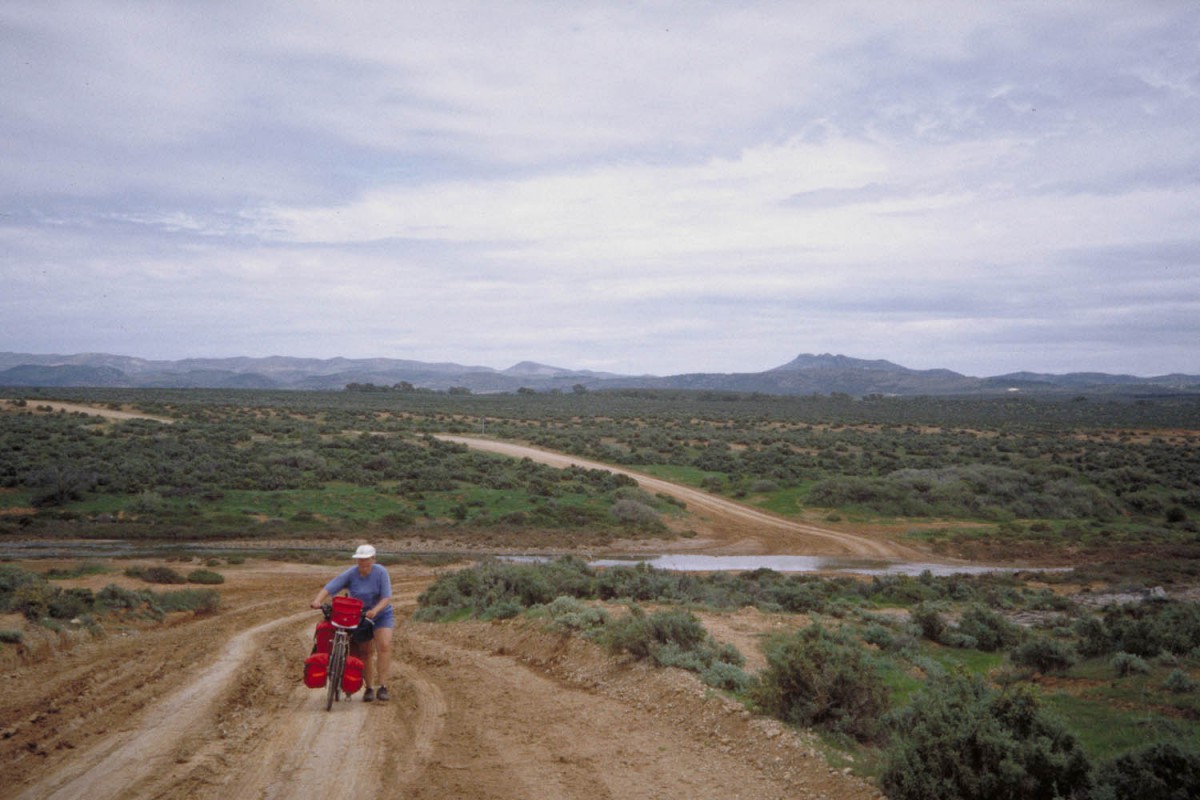 Hard work on a dirt road

The Mawson Trail is set up by members of the Adelaide Mountain Bike Club. That is sometimes noticeable. In the piece including the Adelaide Hills , the bike must sometimes be lifted over fences and dense , there it is more of track than a road . However, the maps are so good that an alternative route is easily found.

We used the South Australia Road Map of Action ; available in the Netherlands . This map with a scale of 1:700.000 accurately capture the main roads. The distances are correct but relief is not indicated.

For the urban area and around Adelaide is an excellent free kit from Tourisme SA Adelaide . This series , called Bike Direct is a publication of the dept . of Transportation and consists of 8 individual maps with a scale of 1:27500 . All trails and alternative routes are plotted here . These maps cover the area of ​​Seaford Roise (south of Adelaide City ) to Gawler ( at 40 km north of Adelaide City ) .

Maps of the Mawson Trail

For the Mawson Trail there is a separate set of maps for sale . This set of four maps is for sale in Adelaide at map stores. They cost A $ 9.95 each. They are also available at the Dept by post. of Recreation and Sport for A $ 10 , – each. This Dept . does not accept credit cards , etc. so you’ll have to send cash A $ . Each map contains information about camping facilities , hotels and telefonnummers of bus companies in the area .

The individual maps are : Adelaide to Marrabel , Marrabel to Spalding , Spalding to Wilmington and Wilmington to Hawker .

The ‘ Flinders Ranges Regional Map ” that is for sale in various shops ( bookshops , souvenir stores) does give all the details. This highly detailed tourist information map  is a publication of the Resource Information Group DENR (Department of Environment and Natural Resources ) in collaboration with Flinders Ranges and Outback Australia Tourism Inc. . All ( un) paved roads are there with distances .

The map we used gives few details about this area . The ” Riverland Regional Map ” that is for sale in various shops ( bookshops , souvenir stores) does give all the details. This highly detailed tourist information card is a publication of the Resource Information Group DENR (Department of Environment and Natural Resources ) in collaboration with Riverland Tourist Association . All ( un) paved roads are there with distances .

All paved roads are in excellent condition This is also true for most unpaved roads . In some cases, we cycled over dry -weather roads . These can be used during and after rainfall impassable because pavement with gravel missing. The dirt roads in the Flinders Ranges National Park were generally slightly worse quality . More washboard and more stones. All the roads were still to ride with 32 mm tyres. 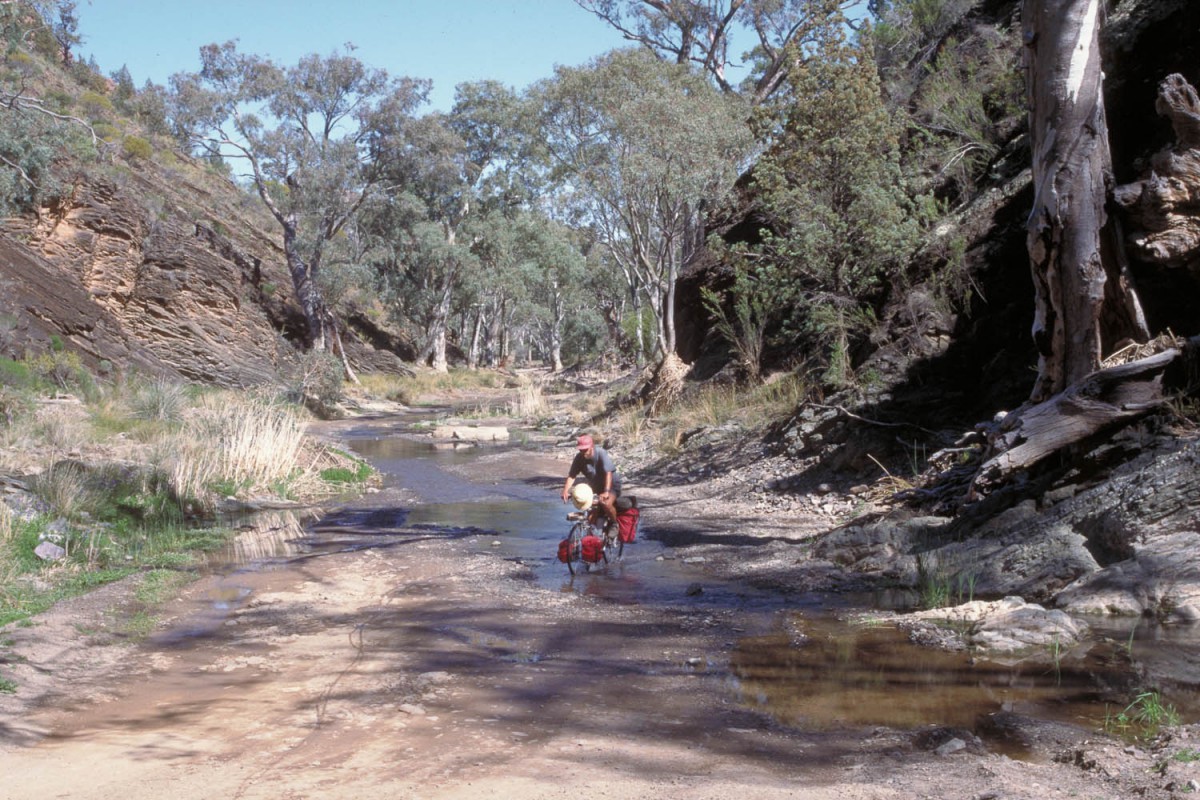 The road follows the river bed

Along the route we passed plenty of villages and towns . Everywhere there is ample opportunity to get something to eat and drink. Drinking water is never a problem . On camping (caravan parks ) is usually for a camper a large tank with rainwater available to use as drinking water. The tap water often tastes not very good but is absolutely harmless . In the smaller towns , shops are open 7 days a week . In larger cities much is closed Sunday !

Along the route are villages and towns with at least a campground . Campsites in Australia called ” Caravan Parks . Except that you can put up your tent , it is usually possible to a fully equipped caravan , a so-called on-site rentals. Ideal in bad weather or if you are super lightweight traveller . All caravan parks have hot showers and washing machines . 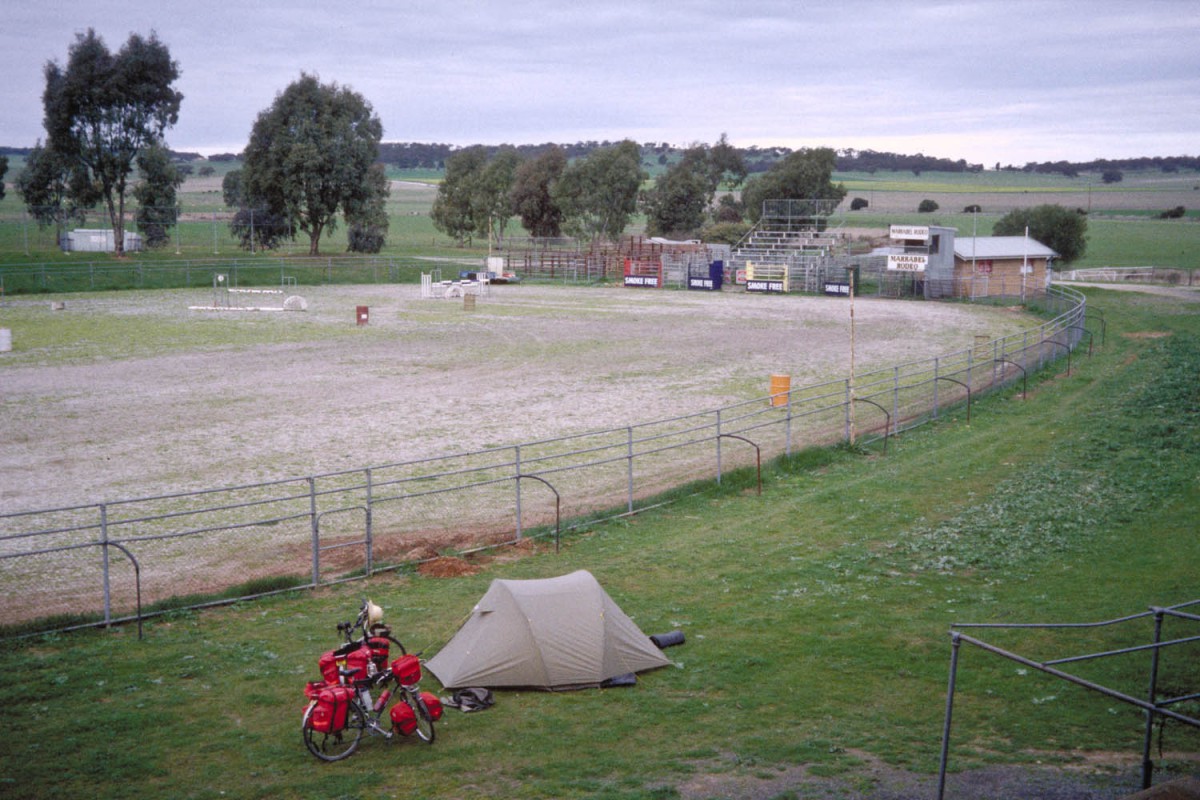 Camping at a rodeo ground

Among others in the Flinders Ranges National Park are also opportunities to camp .We used bush -camp sites. There are no ( ! ) facilities and drinking water should come from the river .

In the whole area are coaches who take bikes under certain conditions .

South Australia is known for its extremely hot and dry climate. We therefore chose to go in the spring. ( Mid-September to late October) . We were faced with very varied weather. The first day was cool and wet with maximums of around 15 gr . C. Later, the weather improved and we even had a few hot days above 30 gr . But it was warm for the time of year , even for this region according to an article in a local newspaper . In short, we had all kinds of weather . 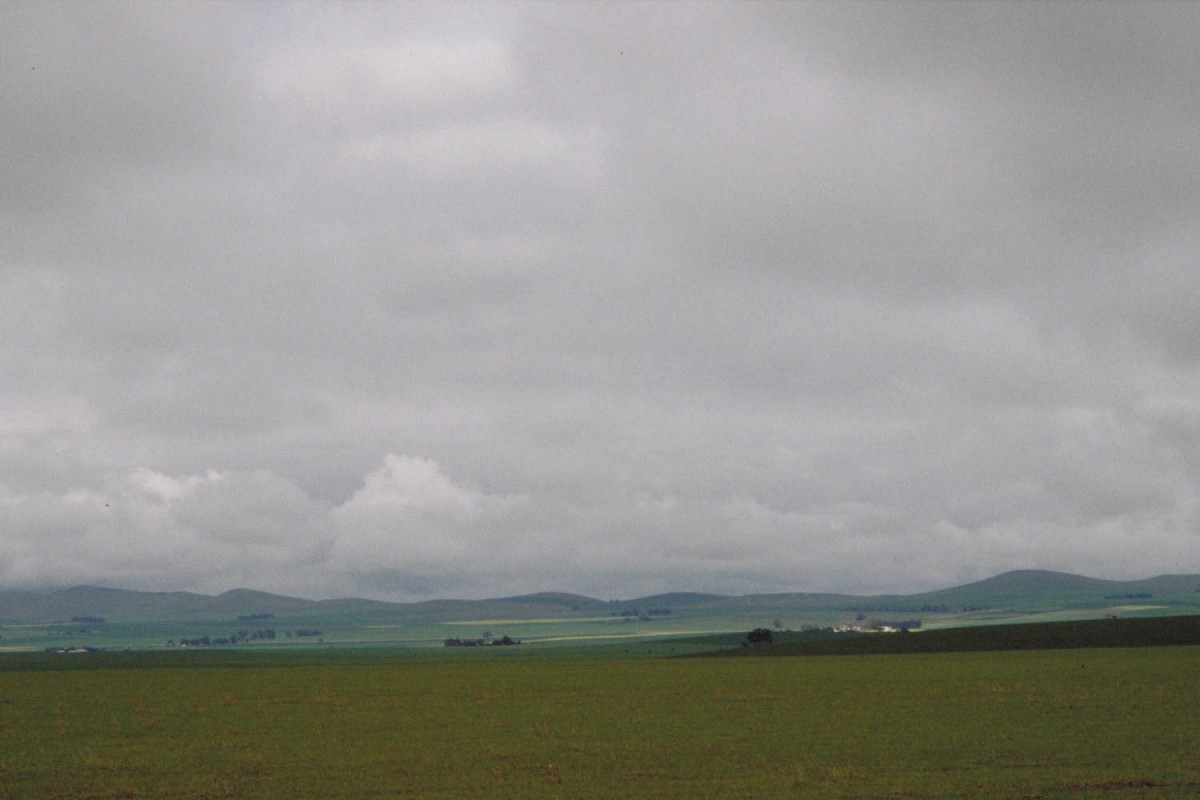 The green pastures of south australia

However, we had many problems with the wind. Which was often very powerful and always blew from the wrong direction  😉 .

In Adelaide , all parts and repair facilities are available. Beyond that there are no bike shops . The local hardware shop or garage sometimes has a few children’s bikes, but that’s it .