Our route in Canada

All information on these pages is based in our personal experiences while cycling through the Canadian Rocky Mountains in September 1991. We cycled from Calgary to Banff, Lake Louise, Jasper, Golden and finally to Kananaskis Provincial Park. Also see the separate page with all the practical info a cyclist in Canada’s Rocky Mountains needs.

Overview of our route 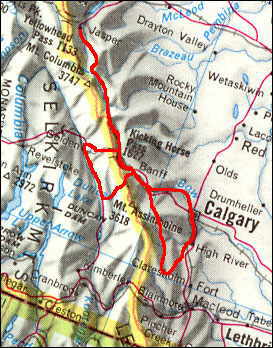 Our route day by day

Despite the long intercontinental flight from Holland the day before, we woke up as usual at seven o’clock in the morning. Quickly we left the city of Calgary following the quiet highway 1A towards Cochrane and the rough campsite at Ghost Lake. No hot showers here but enough wood to make a good fire to warm ourselves in the cool evening.

When we woke up we noticed that the picnic tables and our bikes were all frosted. We continued along the sparsely traveled highway 1A to Exshaw (supplies). The surrounding hills had become mountains when we finally reached Canmore on the Transcanada highway. Found a good spot on the Tunnel Mountain Campground just outside Banff. Campers without cars can use the bear-proof food lockers to store their supplies.

Stayed a few days in Banff to visit the Banff Hot Springs (off-season, closed), the car-free road to Sundance Canyon, the Vermillion Lakes and the Luxton museum. Banff is a highly touristy town with herds of Japanese shopping at the numerous souvenir shops.

As usual the morning temperatures were pretty low. By the time we reached Johnston Canyon the sun was powerful enough to make cycling very pleasant. Beautiful scenery along this road with views of snow-capped mountain peaks en endless forests. No hot showers at Lake Louise Campground.

Just beyond Lake Louise the famous Icefields Parkway begins and travels for about 230 kilometres in the shadow of the Great Divide all the way to Jasper.

After an hour cycling we noticed a large sign telling us that ‘All bears are dangerous – stay in your vehicle if bears are encountered’ Oops, what about cyclists….? Without spotting any bears we steadily climbed to Bow Pass (2088 m) where we enjoyed the fantastic view of Peyto Lake. From the pass was downhill all the way to the campground at Waterfowl Lakes.

look out for bears and stay in your car

No bear-proof food-lockers here but a so-called bear-pole, meant to hoist up your food out of reach from hungry bears. Bring a strong and long piece of rope to use for this purpose! Ours broke… 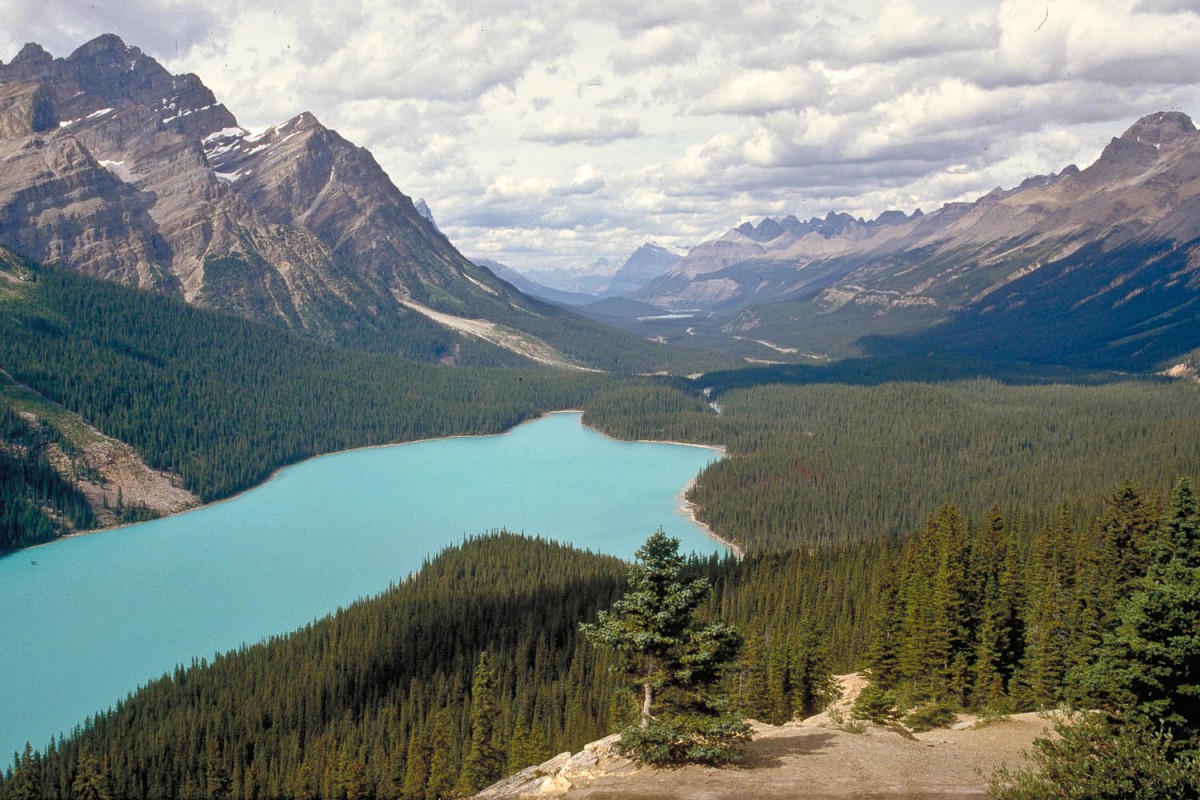 69 km The day started with another 20 km of downhill cycling to Saskatchewan River Crossing. This settlement consists of a petrol station, a restaurant and a large souvenir shop. All busses from Banff to Jasper and vice versa stop here.

The road continued with the steep climb up ‘Big Hill’ and Sunwapta Pass (2088 m). This is where Jasper National Park starts. The Columbia Icefields Campground has a shelter and bear-proof food lockers

In the morning the campground was covered with a thin layer of freshly fallen snow. And still more was coming down. Not a good day to bike but sitting around in a small tent at 1 degrees Celsius was even less attractive. Two kilometres north was the Columbia Icefields Visitor Centre where the weather forecast told us the skies would clear up in the afternoon. And yes they did: the clouds vanished and the snow melted away and we continued our trip to the campground at Honeymoon Lake.

Another freezing morning. Started in full cold-weather outfit. But as usual, by the end of the morning weather was warm enough for pleasant cycling.

By the time we arrived in Jasper a labour conflict between the government and the unions of civil servants had heated up. National Parks staff were probably going on strike and all NP campgrounds closed. Fortunately Jasper’s Whistlers Campground was still open. An excellent place to camp with separate walk-in (or ride-in) sites for walkers and cyclists. 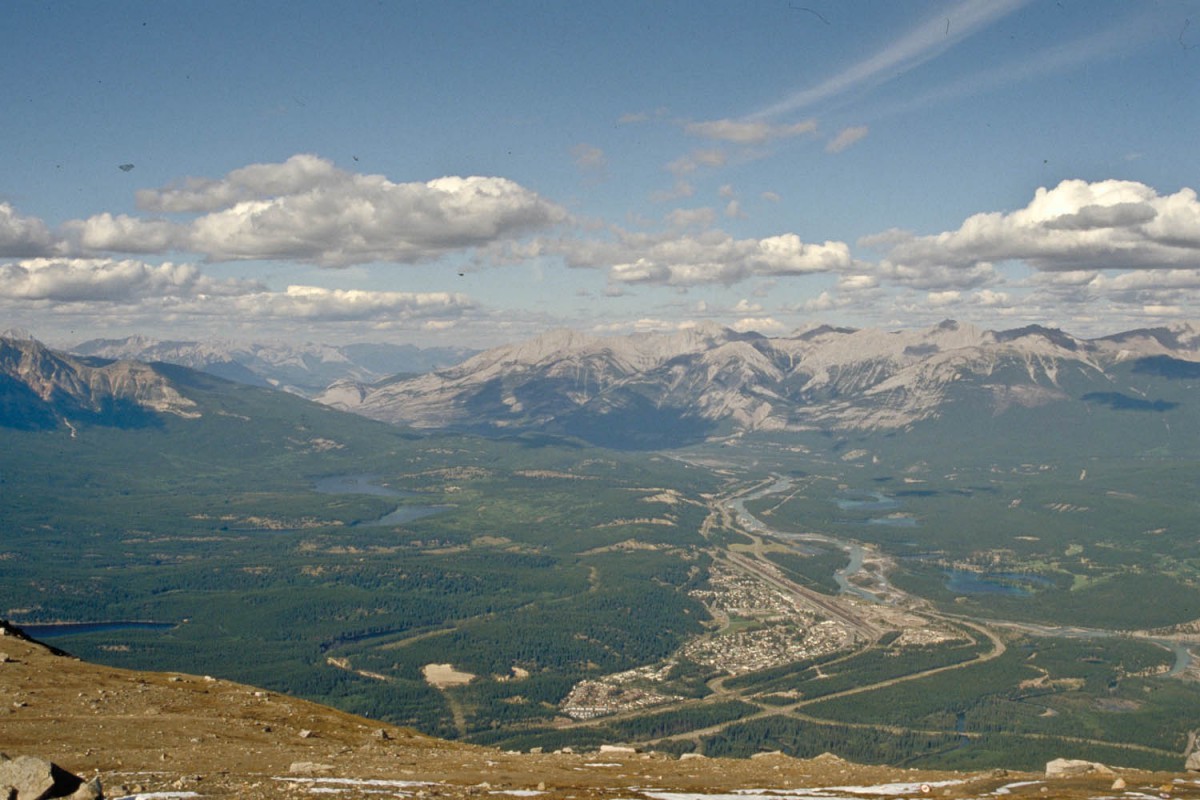 Spent a couple of days in and around Jasper enjoying the beautiful surroundings. Jasper is more relaxed then Banff and obviously less touristy.

To avoid cycling the road to Lake Louise twice, we jumped on one of the busses that travel south from Jasper. Had to put our bikes in a box, which we purchased from a local bike shop for 5 dollars each. People with mountain bikes (no racks, no mudguards etc.) probably can do without boxing.

In a few hours we covered the distance we had cycled previously in several days. It was fun to recognise all those places we’d seen along the way up but we also realised why we prefer cycling. With the tinted glass windows and the airco on you miss 80% of the experience of cycling the same route. It’s like seeing a movie of the Icefields Parkway…! 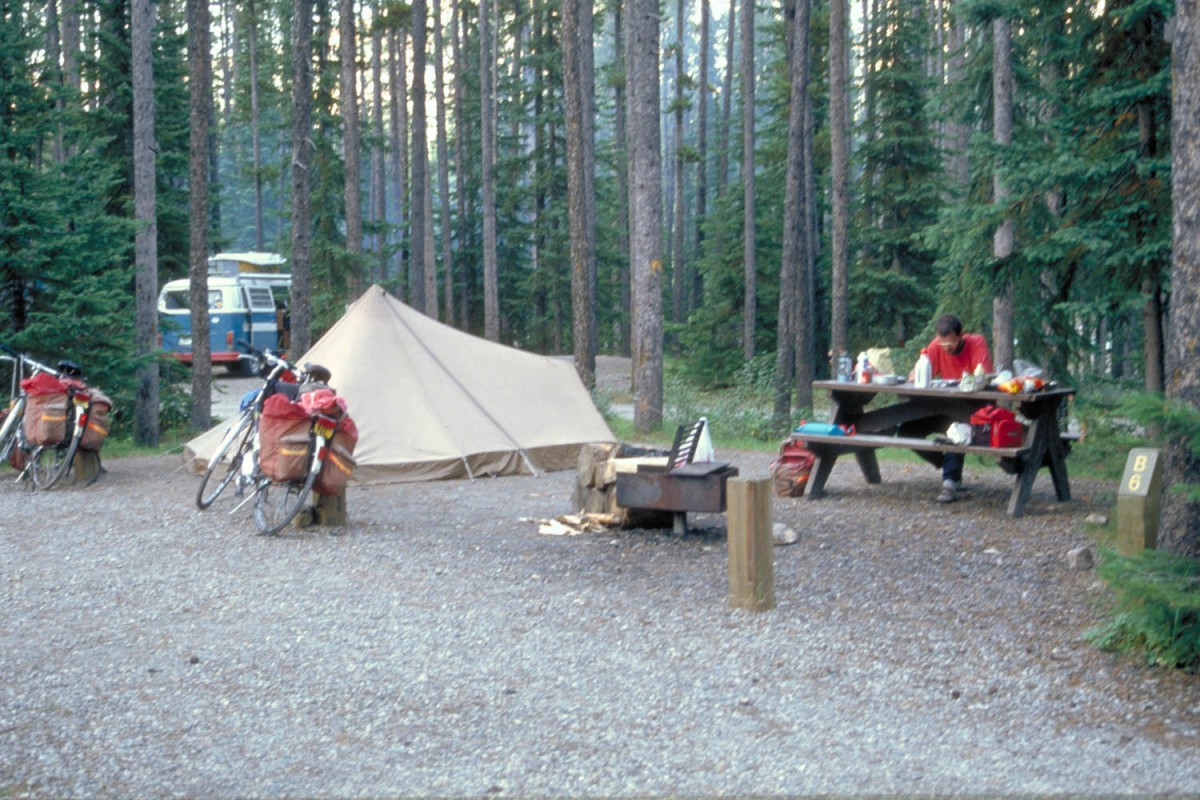 Surprise: the conflict between the government and the unions now had really escalated and the Lake Louise Campground was closed. Heavy concrete slabs blocked the entrance but with our bikes we could easily get in. There was nobody around, the toilets were closed but drinking water was available. We had the campground (more than 200 campsites!) just for ourselves. In the shelter we found a wood-stove and a huge pile of chopped wood. Had a great evening looking at the fire and warming our hands.

When we left the campground that morning we found only one striker at the entrance. He waved friendly and wished us a good trip. 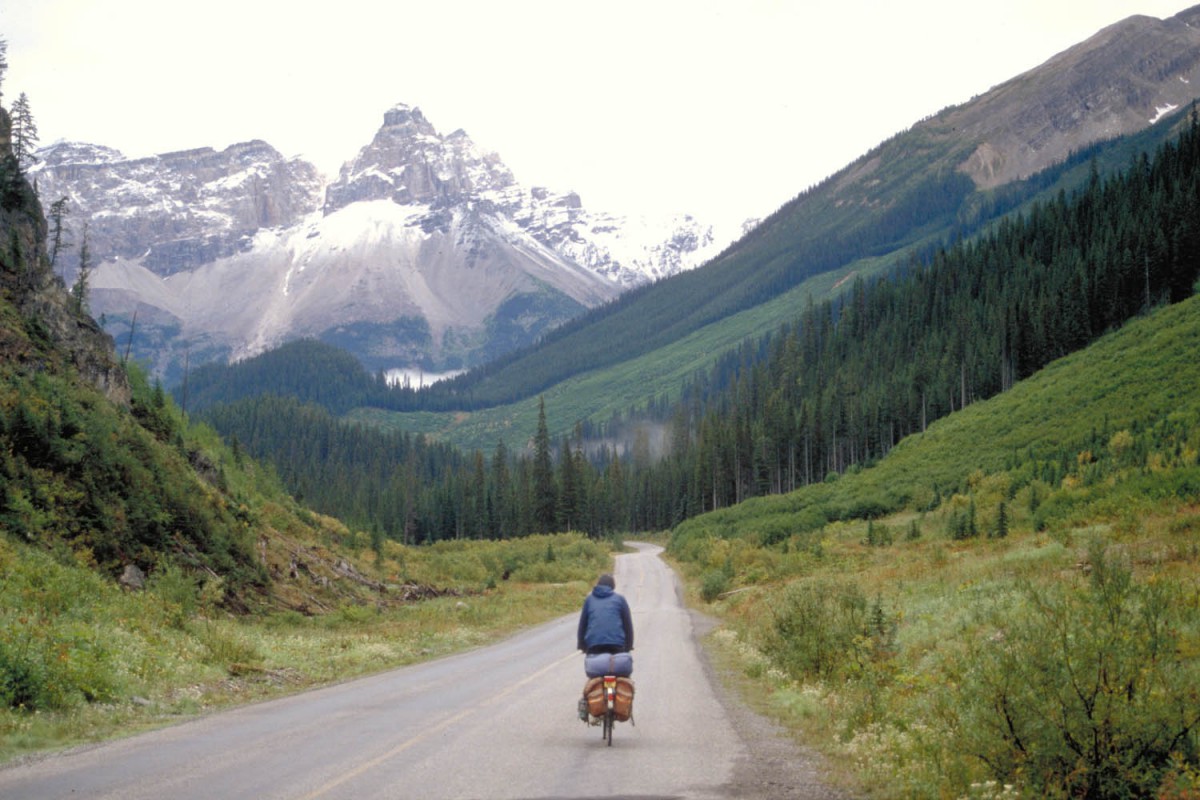 near the Takakkaw Falls

We peddled up to Moraine Lake, the famous lake that features on the Canadian 10$ bill. It indeed is a great view and a lovely lake, but we abandoned our plan to rent a canoe here, as it had started to rain. Lake Louise proper was a bit of a disappointment. Very touristy with an ugly large hotel in front of it. Passed the Great Divide and descended towards the junction with the Takakkaw Falls Road. This road up to the falls was described as one of the steepest of the Rockies. At the falls just as much water was coming down from the air as from the falls itself and we abandoned our plan to camp here. The nearby Youth-hostel was a much warmer and drier alternative.

The narrow wooden bridge to the falls was covered with a thin layer of ice. We just had a quick look at the 200 m high falls before we descended again to the main road. Golden was our destination for today. Not much to see there; the KOA campground is at the top of a steep 8% climb just outside the village. Golden is situated at only 790 m above sea-level, so it’s much warmer.

Continued south along highway 95. Passing through small towns as Parson and Spillimacheen (shop open 7 days a week). No superb scenery here but relaxed cycling between pastures and farms. A few kilometres south of Spillimacheen we stayed at the Spur Valley Campground, a nice place with hot showers.

Our first stop that day was Radium Hot Springs at the junction of the highways 95 and 93. The hot springs itself were closed (strike!) and the rest of the settlement was not very attractive with lot’s of hotels with typical German names like ‘Alte Liebe’ and ‘Tirol’. We turned left on highway 93 back into the park. Our guidebook had warned us here about the ‘…horrendous approach up Sinclair Pass (1486 m) …’. Well, it wasn’t that bad.  As all the campsites were closed now we stopped at the Wardle Creek Picnic Area to put up camp.

Resupplied at Vermillion Crossing and continued climbing up the Great Divide again (Vermillion Pass at 1460 m). In Banff National Park staff is still on strike and campers were redirected to an emergency campground. We found a much better spot next to it in Banff’s park. Grassy sites, a huge shelter with plenty of firewood and the facilities even included hot running water.

Sunny warm weather and a strong tailwind were all the ingredients for a perfect day of cycling south to Kananaskis Country Provincial Park. Camped at the large Mount Kidd RV Park (230 sites, swimming pool, tennis courts) where the unserviced sites were a day hike away from toilets and showers.

Inside the Kananaskis Park are quite a few separate bicycle-paths. Signposting was erratic and we lost the way several times ending up on (also) paved walking trails. Weather was getting cooler and we decided to stay at the Boulton Main Campground because of the heated ablutions block with warm showers. Collected a huge pile of wood to make a large campfire. Decided to stay one or two nights here depending on the weather. 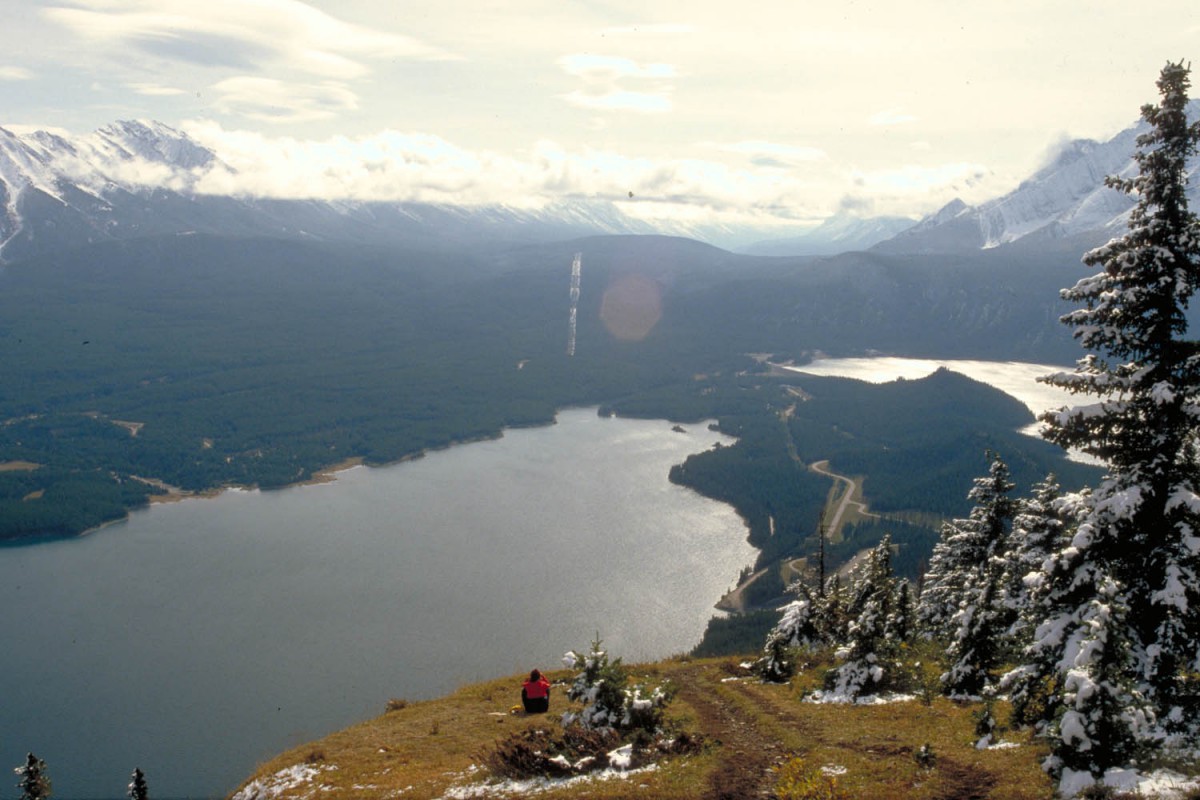 The next day the rain had changed into snow. Everything was white when we got up the next morning. No day to bike around but a great morning to walk one of the trails. Because of the weekend the store had opened after all. They were selling hot chocolate and gigantic muffins and a limited selection of groceries. Just what we needed to keep us going for a few days.

With the weekend passed the road up Canada’s highest pass (2206 m) was deserted. This road is closed from December to June. The long descent was great and the views of the mountains capped with freshly fallen snow were superb! 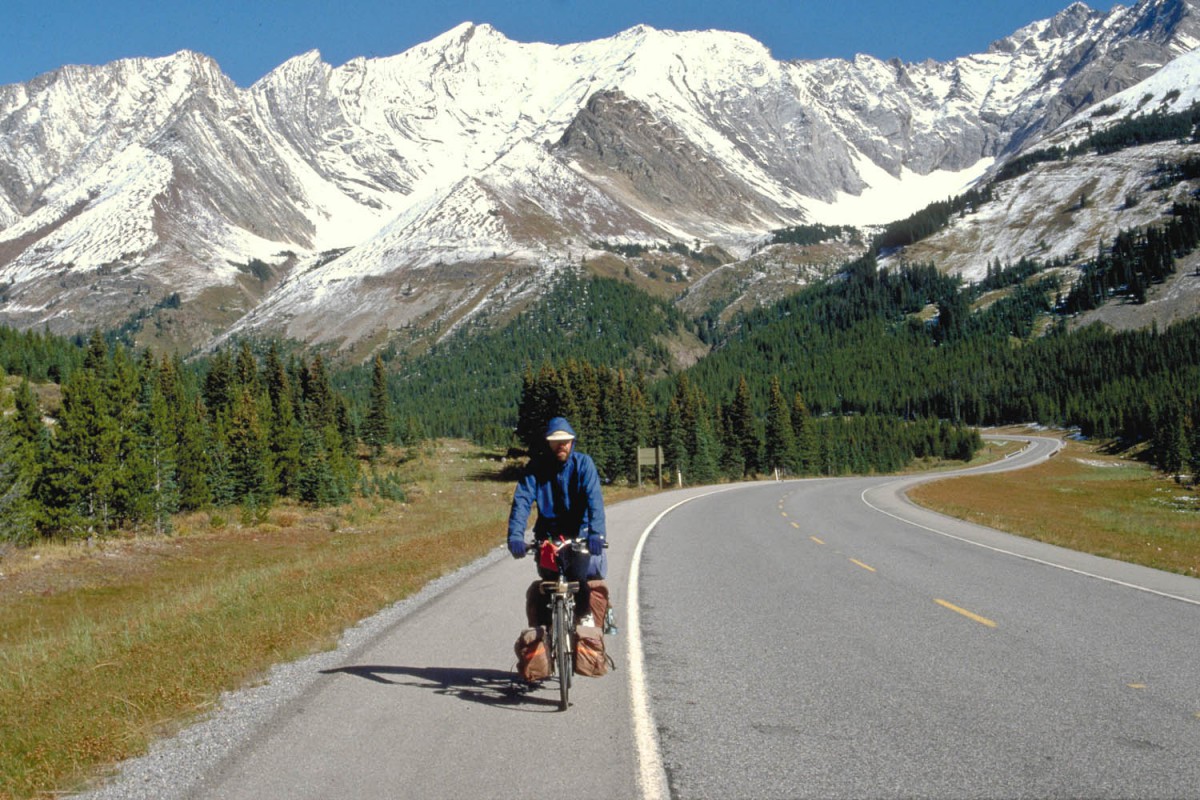 Our guidebook told us that this road was just as nice as the famous Icefields Parkway and they were right. About 25 km beyond the settlement of Highwood Junction (supplies ) was the free Rivers Edge Campground.

Riding into Calgary with it’s noise and busy roads was a big change after the natural beauty of the Rocky Mountains. One day later we pushed our bikes along Calgary’s extensive network of bike paths towards the airport.