“Is it safe to cycle in South Africa?”

After our return many people were curious about cycling in South Africa. “What was the weather like? Did you have many punctures? One question was most frequently: “Is it safe over there?”.

Yes it is safe over there! Of course the normal precautions apply. Keep valuables out of sight etc. We wouldn’t want to bike through the centre of Cape Town or cycle around at night, but outside the cities your security is no problem. People are friendly and helpful. We didn’t feel unsafe for one moment.

We found it difficult to obtain good road maps in advance. The use of Google Earth and Google Maps was very useful. In Stellenbosch we purchased the `Touring Map of Western Cape` scale 1:750.000 by Sunbird Publ.

The MapStudio Tourist Atlas of the Western Cape also has some useful detail maps.

The Rough Guide Map of Southe Africa (scale 1:1.700.000) is useful for an overview of the complete country.

The Maps Shop publishes several maps, including detailed maps of the Garden Route and the Baviaanskloof. The Baviaanskloof map may be available for free from tourist information bureaus in the region.

We have published our entire route as a Google Map. See our Tour Report page. 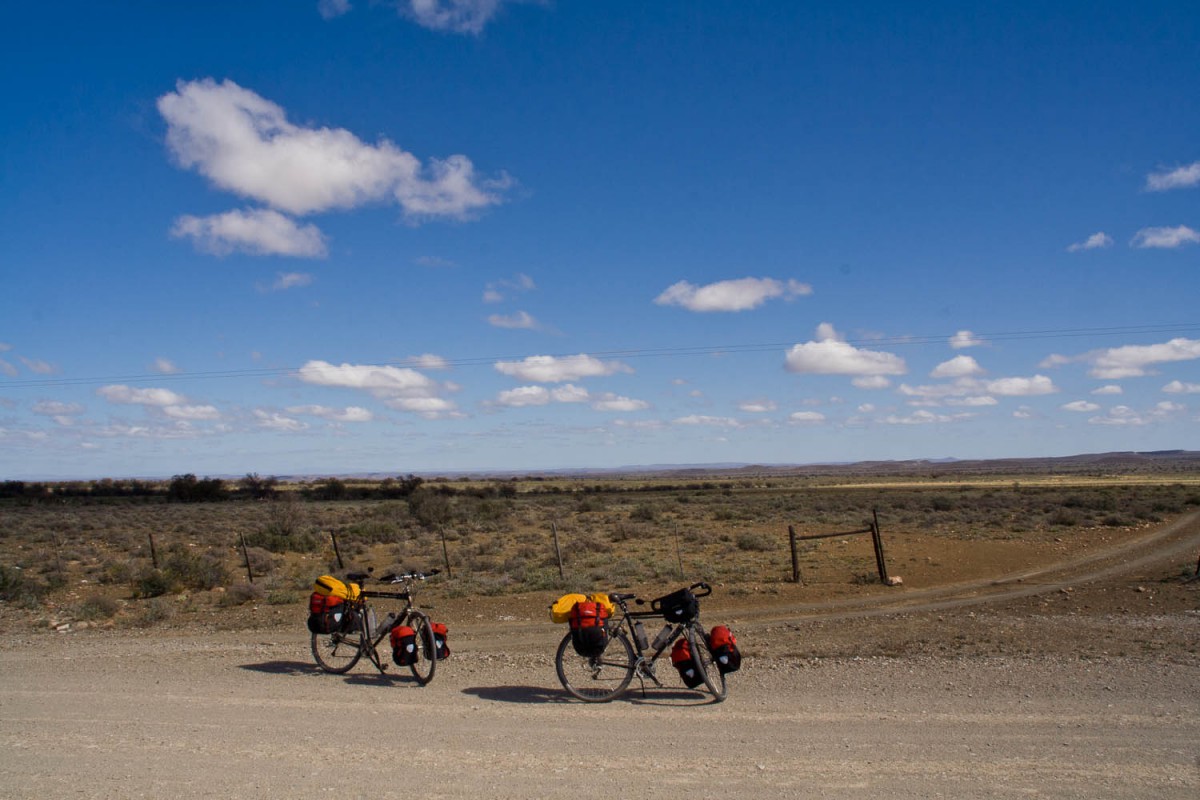 We used the well-known Lonely Planet travel guide, although is doesn´t have a lot of information on most towns we visited.

South Africa on the WWW

We searched the web for useful bike sites and found these. All links open in a new browser window.

All main roads were in a good condition and generally speaking traffic is light. Even better, many paved roads have a shoulder (small strip on both sides separated by a yellow line) that can be used as a bicycle lane. In the mountains the steepest sections of main highways will have passing lanes.

Most of the gravel roads we used were in good or reasonable shape. A mountain bike is not needed on this trip; wider tyres are useful. Traffic is on the left hand side of the road. 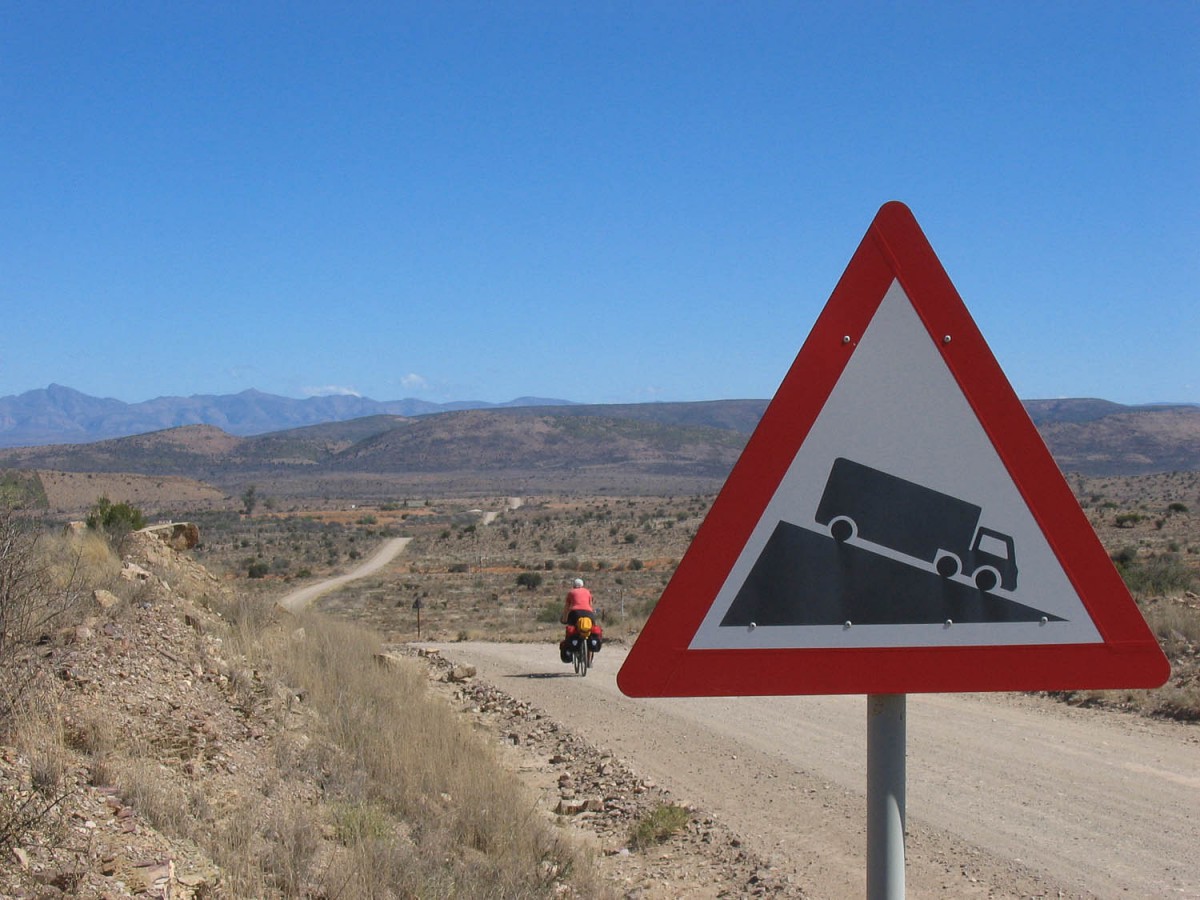 On the road to Janssenville

Mountain biking and road racing are very popular in South Africa but to get the essential part you may have to go a long way. Bring any essential spare parts.

For the self catering every town has a small supermarket. Most shops in the town centres close on Saturday afternoon and Sunday.

It’s safe to drink water from the tap. At some places farm-stalls along main roads sell farm produce and cold-drinks.

The advantage of this low season period (september and october) is that campgrounds and hotels are never very busy. Try to avoid December and January as it is the holiday season.

In 2008 both September and October were exeptionally cool. We started with a few very cold and rainy days. Most mornings were chilly. Really warm days (over 30 degr. Celcius) were an exeption. Over all the cycling weather was good.

For cyclists it is good to know that August is supposed to be the most windy month in this region.

Detailed weather information can be found at:
General forecasts by the South African Weather service. 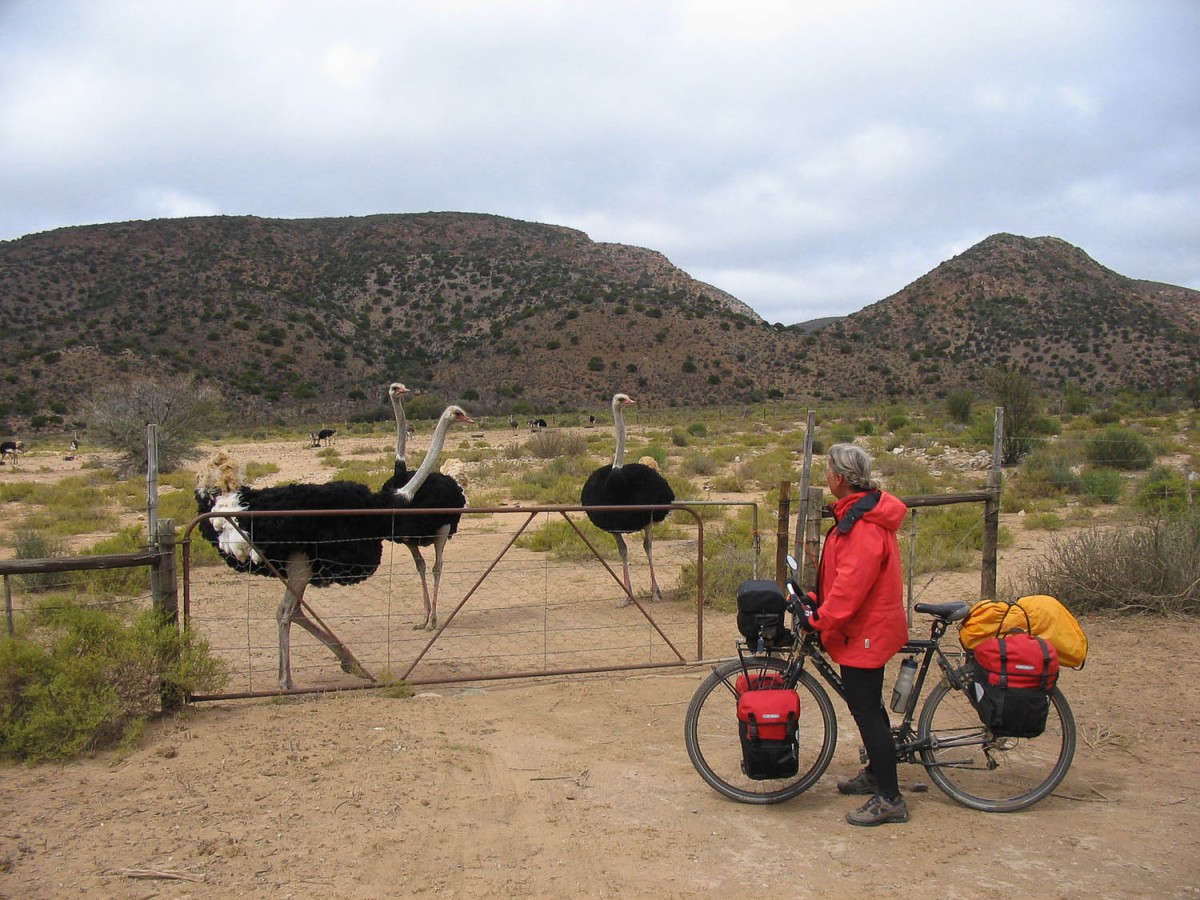 Ostriches in the Baviaanskloof

Yes, South Africa is famous for it’s wildlife. No, we did not see much more than a few zebra’s and springbok at a game reserve. Outside parks and reserves you’ll see no game. We visited the Anysberg Nature Reserve, The Karoo National Park and the Camdeboo National Park. All these areas are open for cycling although certain parts of the Camdeboo Park are not.

The Baviaanskloof Wilderness area has a population of buffaloes and a few rhinos. The road leading through it is a public road.

Rooms in lodges, hotels and B&B’s are widely available along the route we followed. Farms often offer B&B. A nice double room with breakfast will cost you Rand 300 – 600. Major towns will also have budget / backpacker accommodation. Our entire trip through the Karoo can be done without a tent. 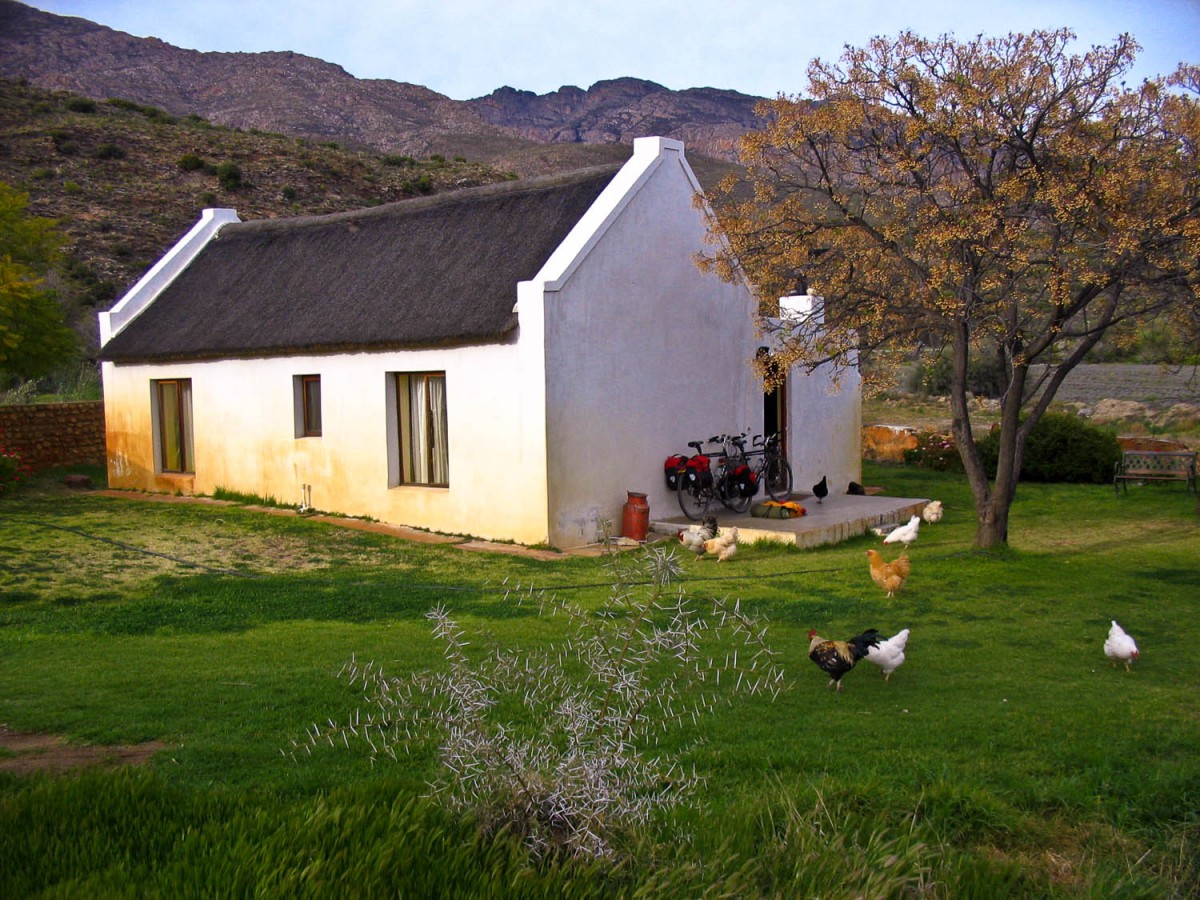 Many towns and national parks have camping facilities, including flushing toilets, hot showers and bathtubs. A campsite will cost around Rand 60 to 80 for a tent site. 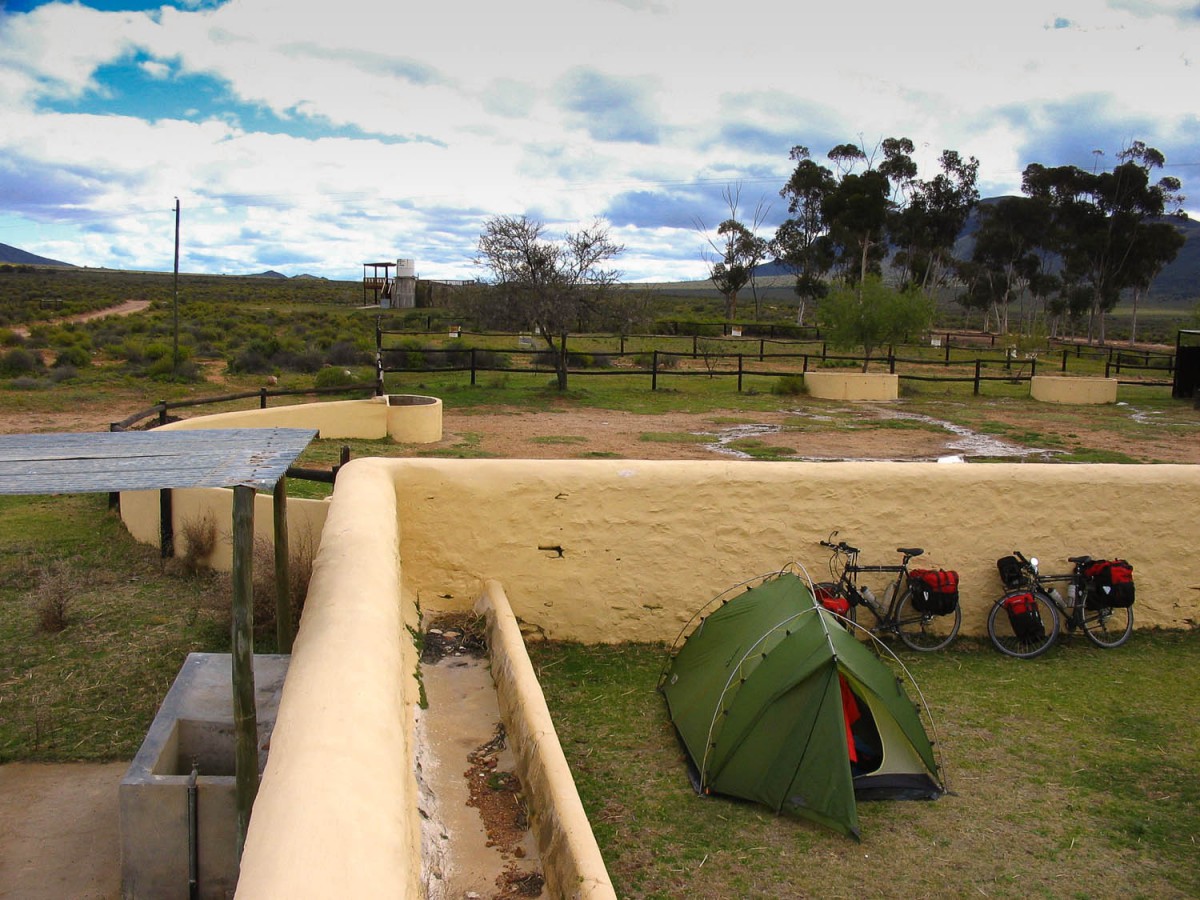 As a cyclist you may have to stop for a night at villages where there is no campground of hotel. In the Karoo we spend a night at the abandonded hotel at Seekoegat and pitched our tent on the lawn of a farm.

Of course cycling is the best way to get around, but South Africa is a large country so you may want to consider one or more of these alternatives:

Many South Africans drive ‘bakkies’ (pick-up trucks) that are ideal for people with bikes. The usual precautions on hitchhiking apply. In the Karoo area we visited there isn’t a lot of traffic. Several days we saw only a few cars.

They seem to go everywhere but we are not sure they will take bikes. These buses always seem to be very very full. The long distance buses sometimes are willing to take bikes (must be packed). An excellent service is the BazBus. They accept bikes at no extra charge, just book your bike in advance. We used the Bazbus from Storms River to Stellenbosch.