Our route in California

All information on this page is based in our personal experiences while cycling  in California  in september and october 2010. We started in Fresno and ended in Tom’s Place in the Owens Valley (Eastern Sierra). Our initial plan was to continue to Death Valley and Las Vegas.

Due to familiy matters we had to break our journey halfway and return home. On this trip we mostly followed the Sierra Cascades bike route.  The distance covered was almost 750 kilometres.

To exit busy Fresno in an eastern direction East Belmont Avenue is a good choice. The road is wide, has a decent shoulder or bike lane and doesn’t carry too much traffic. It’s possible to follow this avenue way out of town as long as it runs parallel to the Highway 180. Highway 180 is much busier and lacks a shoulder.

The 180 gets more quiet after the settlement of Winkler. From that point the road also starts climbing out of the valley. Later it drops to Sqauw Valley (shops). A few miles beyond Squaw Valley is the Sierra Inn Motel with accommodation and meals. 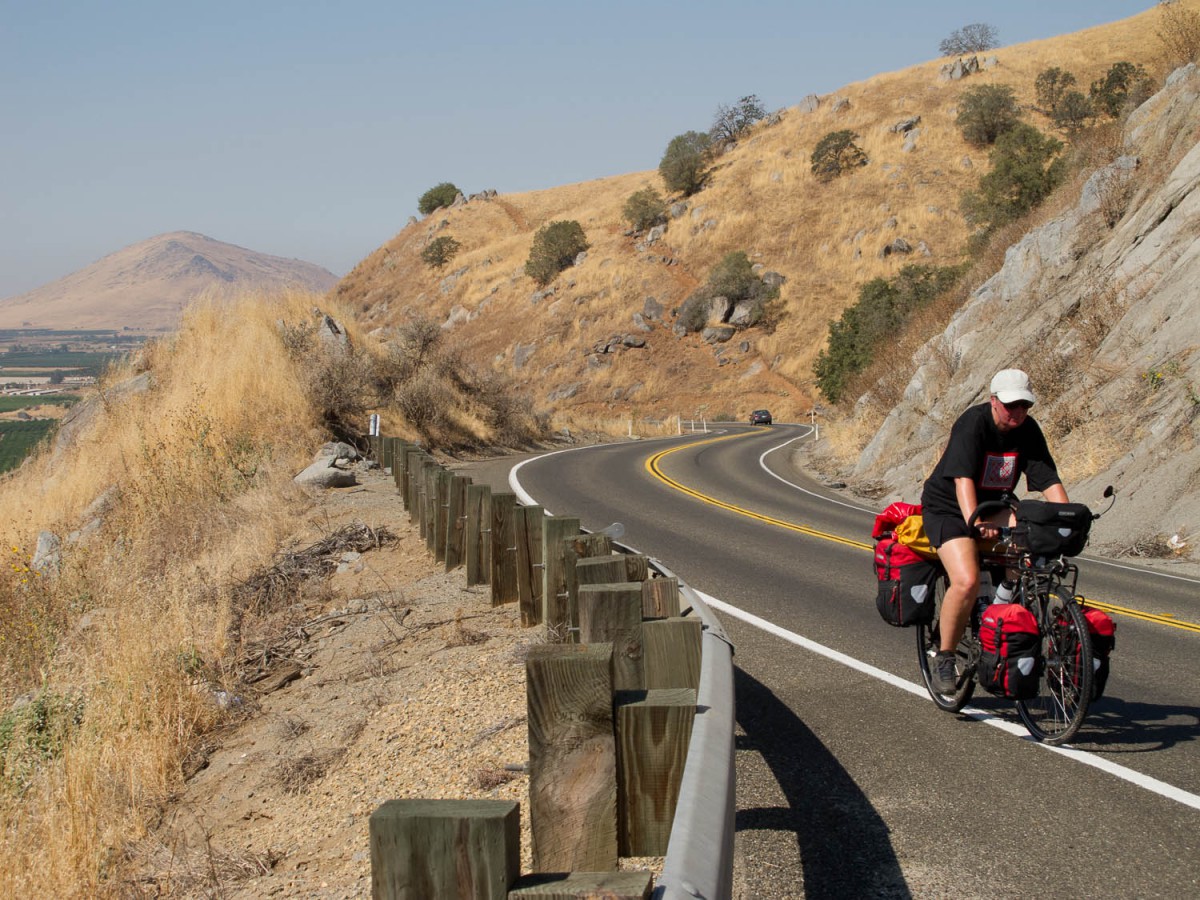 leaving Fresno, climbing into the mountains

From here the road continuously climbs, until you reach an altitude of 7000 feet. 10 kms beyond the junction to Dunlap is the Snowline Lodge (accommodation and meals).

After the National Park Entrance station the climb continues along the Generals Highway. The last 8 kms into Stony Creek (campground, shop, showers) are downhill! 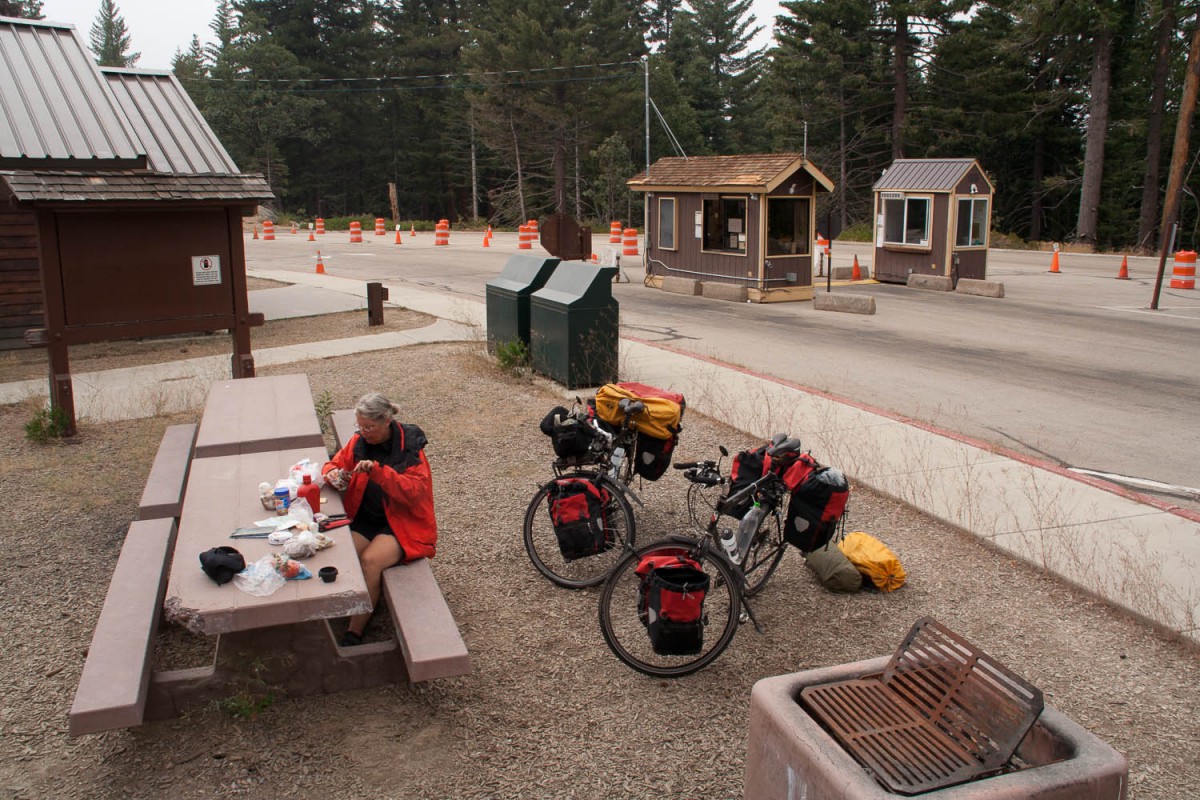 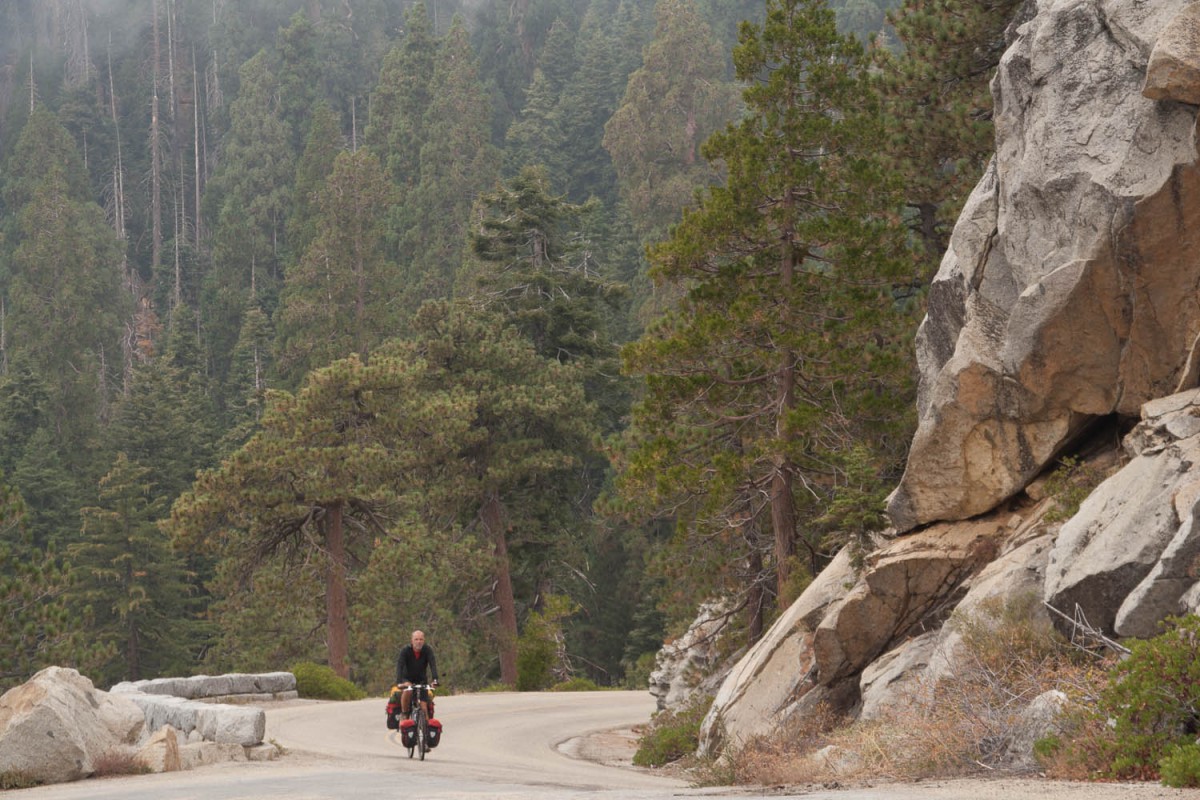 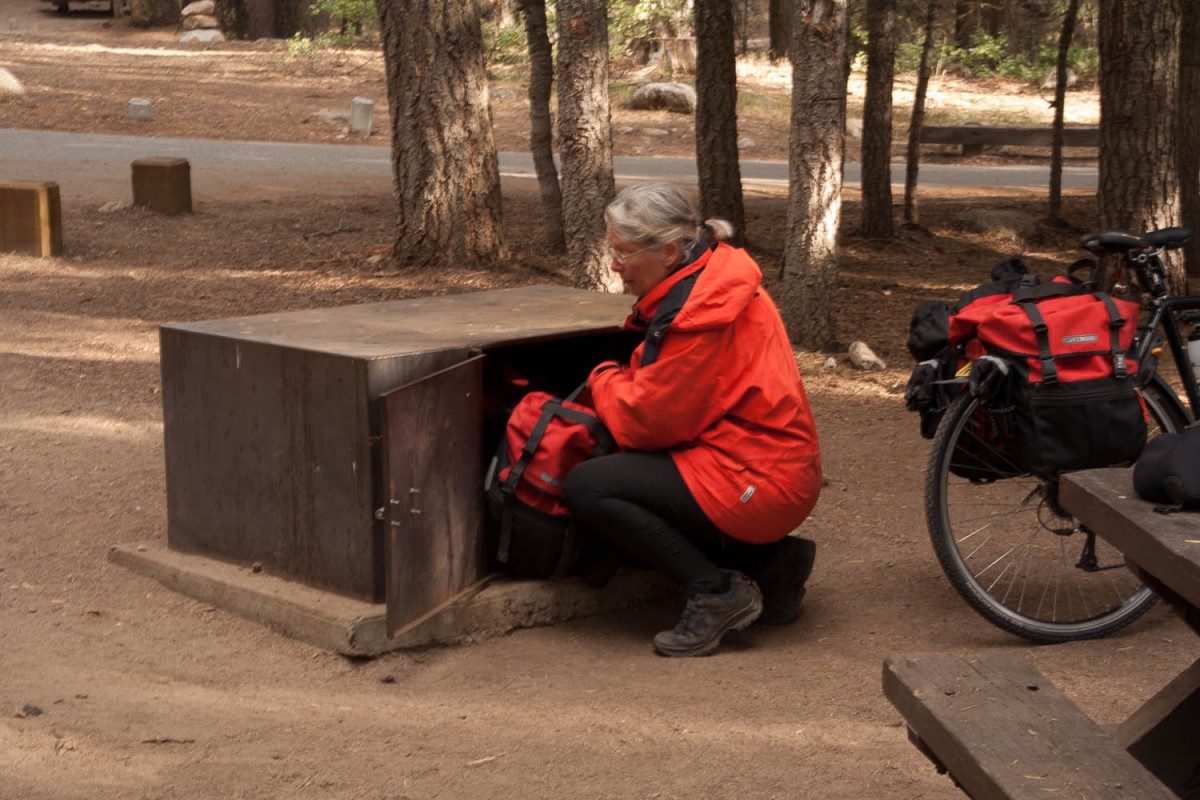 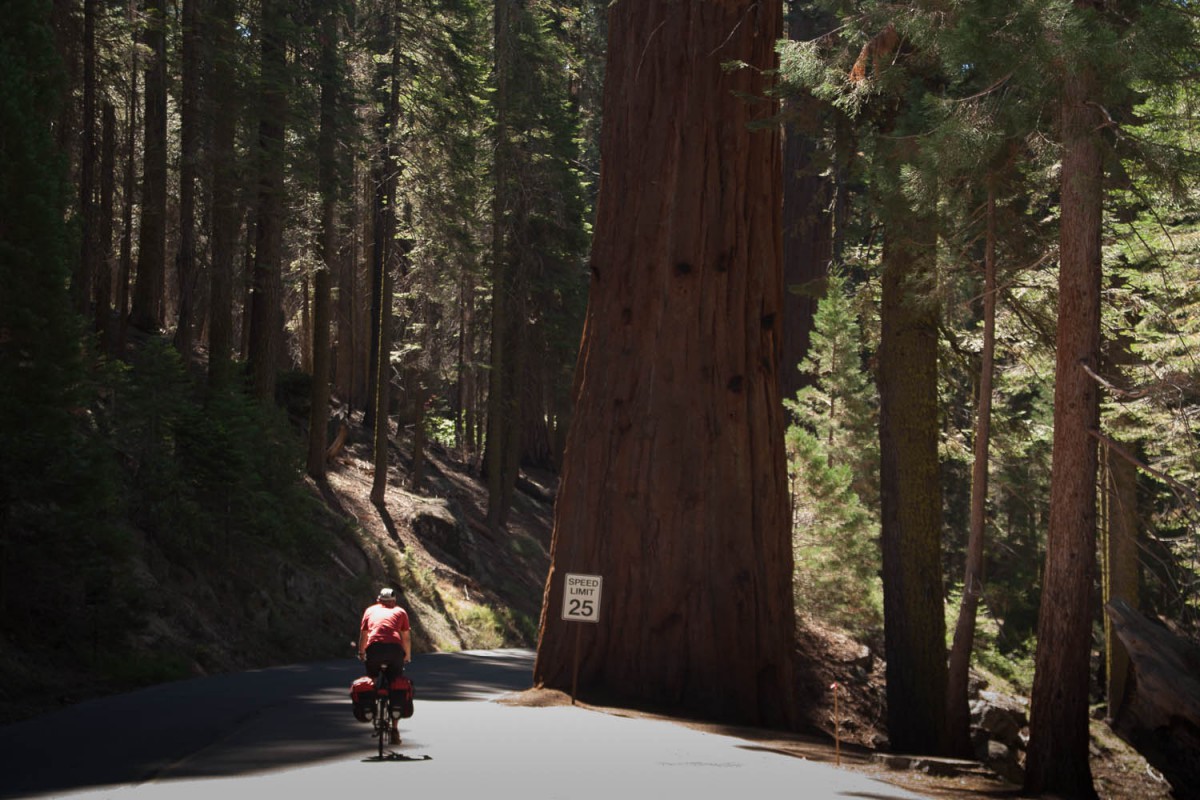 This section starts with an easy and enjoyable downhill run all the way to the Elwood Road junction. The road then climbs up and down before entering the narrow downhill serpentines of the Tenter Canyon.  You’ll cross the Wonder Valley and descent further to Piedra (shop). The Winterton recreation area just before Piedra makes an excellent stop. Plenty of shady trees along a cool stream here. 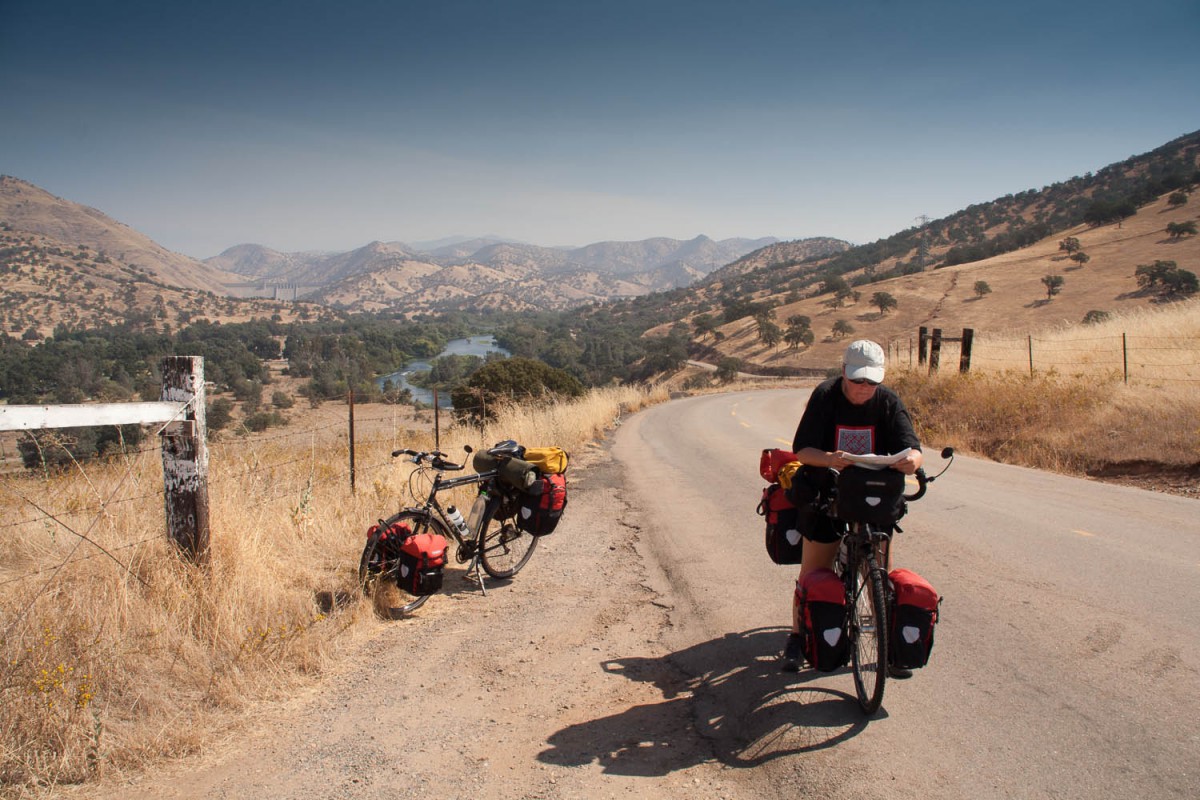 The road then continues towards the lake. There are some hills to climb before the lake itself will appear deep below you. Most accommodation on the lakeshore seems to close after Labour Day. We stayed at Bensons Lakeview resort. The owners were so kind to open a motel room just for us. The campground here is rather exposed, run down and dusty.

The kms along the lake are almost flat but once you leave it behind some serious hills will appear on your path. The roads are narrow but very quiet with almost no traffic. Only highway 168 which we followed until the turn-off to Auberry was much busier. Watch out: the turn-off to Auberry is not signposted and not very obvious.

Auberry is a nice little town with a good supermarket, a library with free  internet access and accommodation at the friendly Bubba-Lu (formerly known as Daddy Jo). Bubba-Lu is closed a few days per week, contact the owners Joe and Betty Taylor  through the local supermarket. They live nearby on S.J. & E. Road.

Beyond Auberry is the steep descent to and equally steep ascent (9%) from the San Joaquin River. Near the river is a campground. The road continues to climb to North Fork (good supermarket) and then winds through dense forest to the shores of Bass Lake.  Along the quieter western shore of this lake are several campgrounds and lodges.  The road on the eastern side is much busier!

From Bass Lake you will finally reach Highway 140, one of the main routes into Yosemite National Park. This road is not too busy (at least in September) but lacks a shoulder. Until Fish Camp (shop, atm, campground) it’s uphill most of the time. Followed by a 1000 feet descent into Wawona (campground, shop).

From Wawona it’s an easy ride into the valley. The 1 km tunnel (near the Tunnel View viewpoint) is well lighted and easy to cross. All roads in the valley are one way traffic. For cyclists there is an excellent network of paved bike lanes. Bikes are also allowed on some of the older paved roads in the valley that are now closed to car traffic. Watch out for the dozens (hundreds) of recreational bikers on their rented two-wheelers! Good to know: rented bikes are not allowed on the road to Mirror Lake; a sign tells it’s too steep 😉 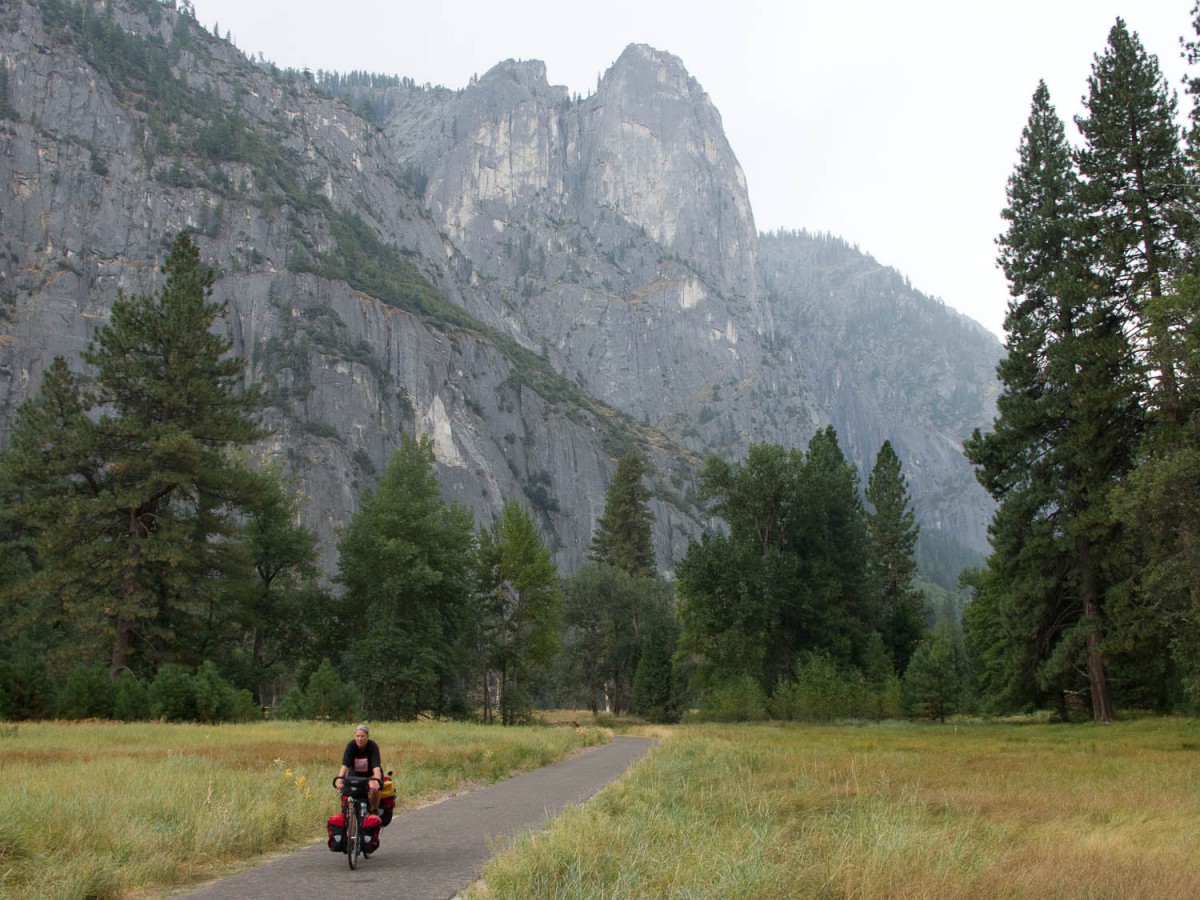 riding the 15 kms of bike lanes in Yosemite NP 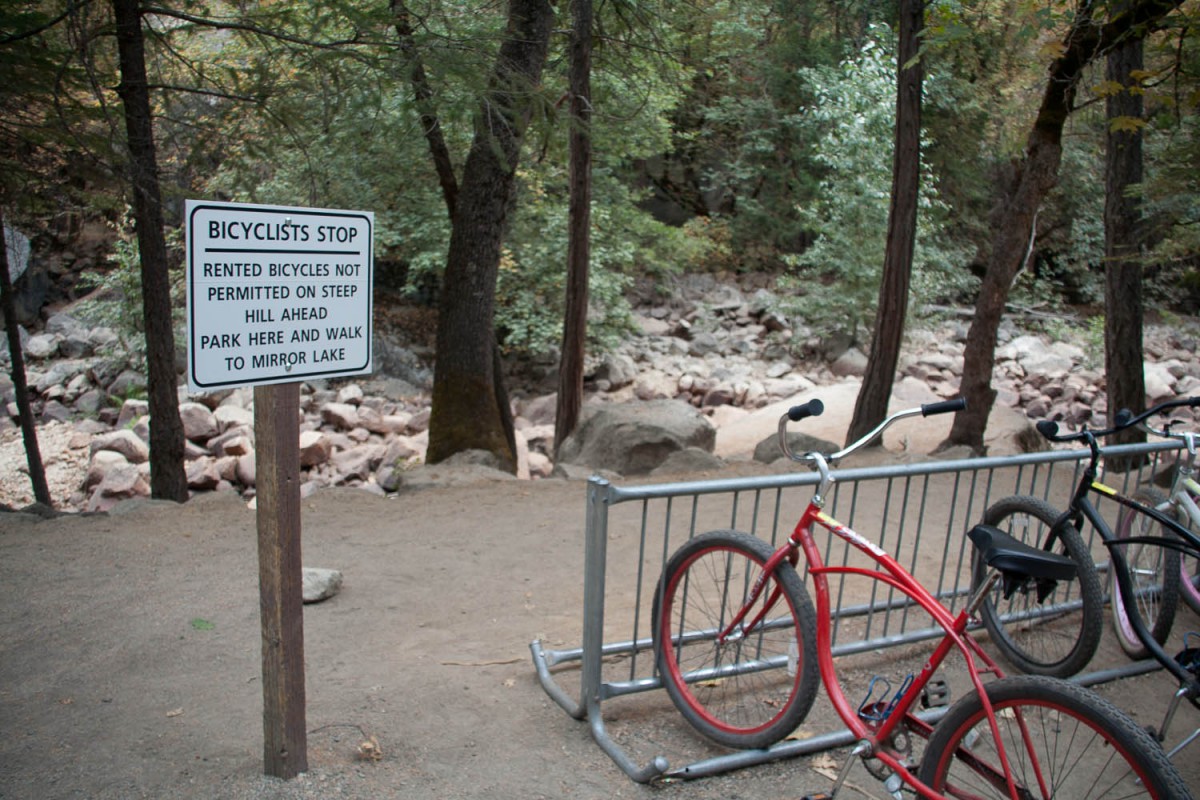 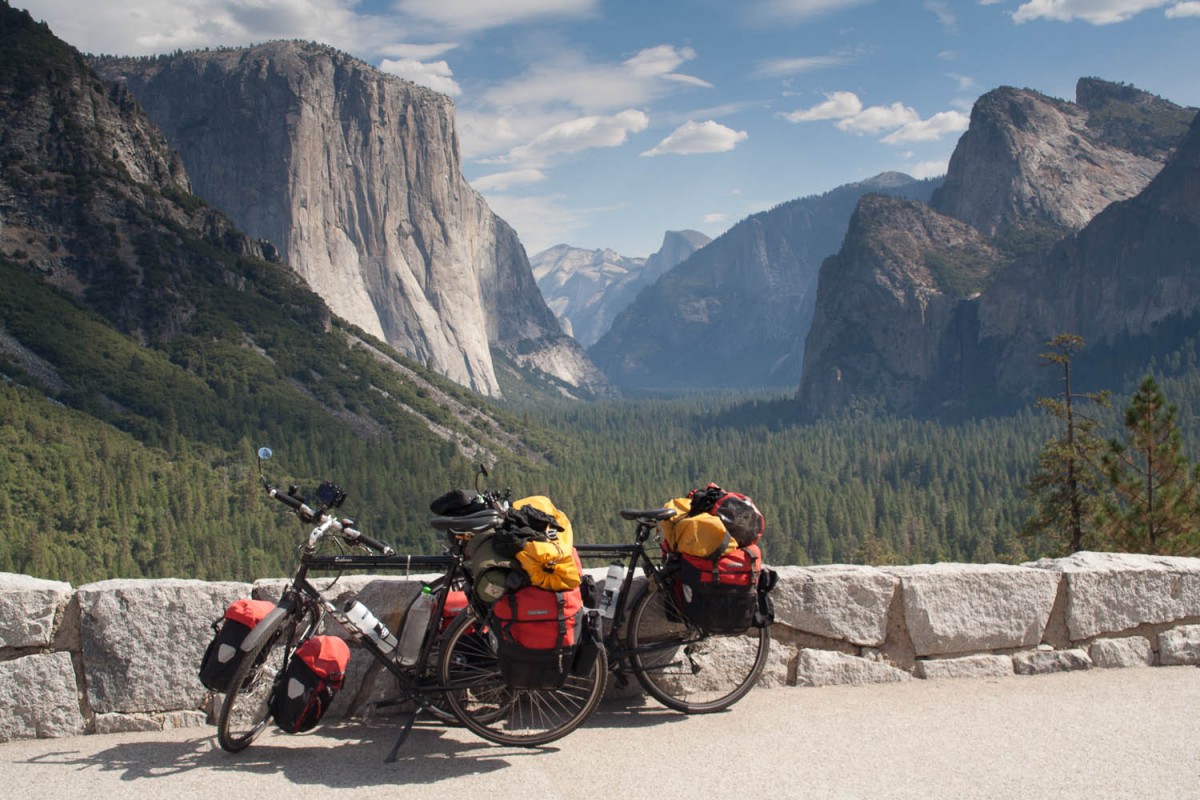 To continue to the Tioga Pass Road you first will have to climb out of the valley: a 15 kms ascent to Crane Flat (shop, atm, campground) at the junction with the Tioga Pass Road. This road opens late (June) and closes early (November). We climbed this road in the beginning of October and it still carried a steady stream of (recreational) vehicles. It must be very busy during high season in July and August! 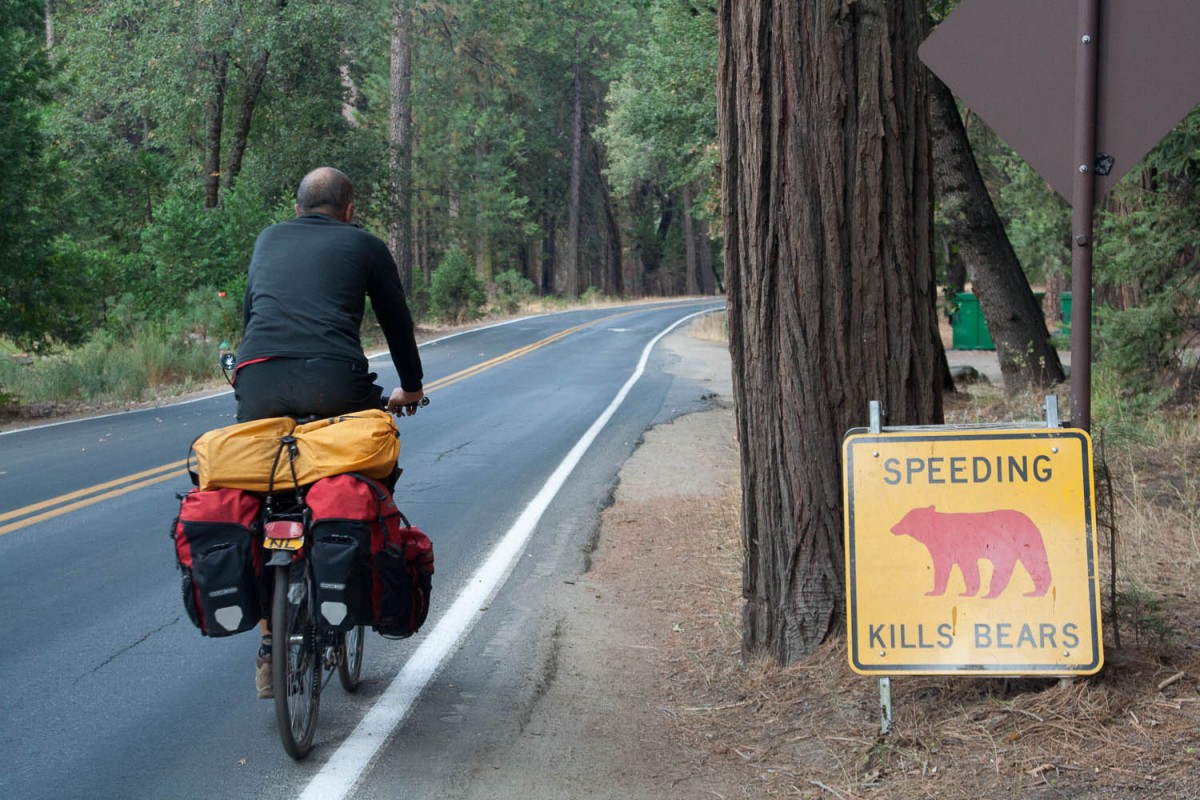 watch out for bears

We camped at White Wolf Campground. This campground was already closed but we decided to stop here because of very cold and wet weather. There were no facilities but we were able to use the bear boxes. Please note that once closed the Park officials will remove any signposts towards this campground. Use your map and calculate distance to find the right junction in case you want to camp here off season. 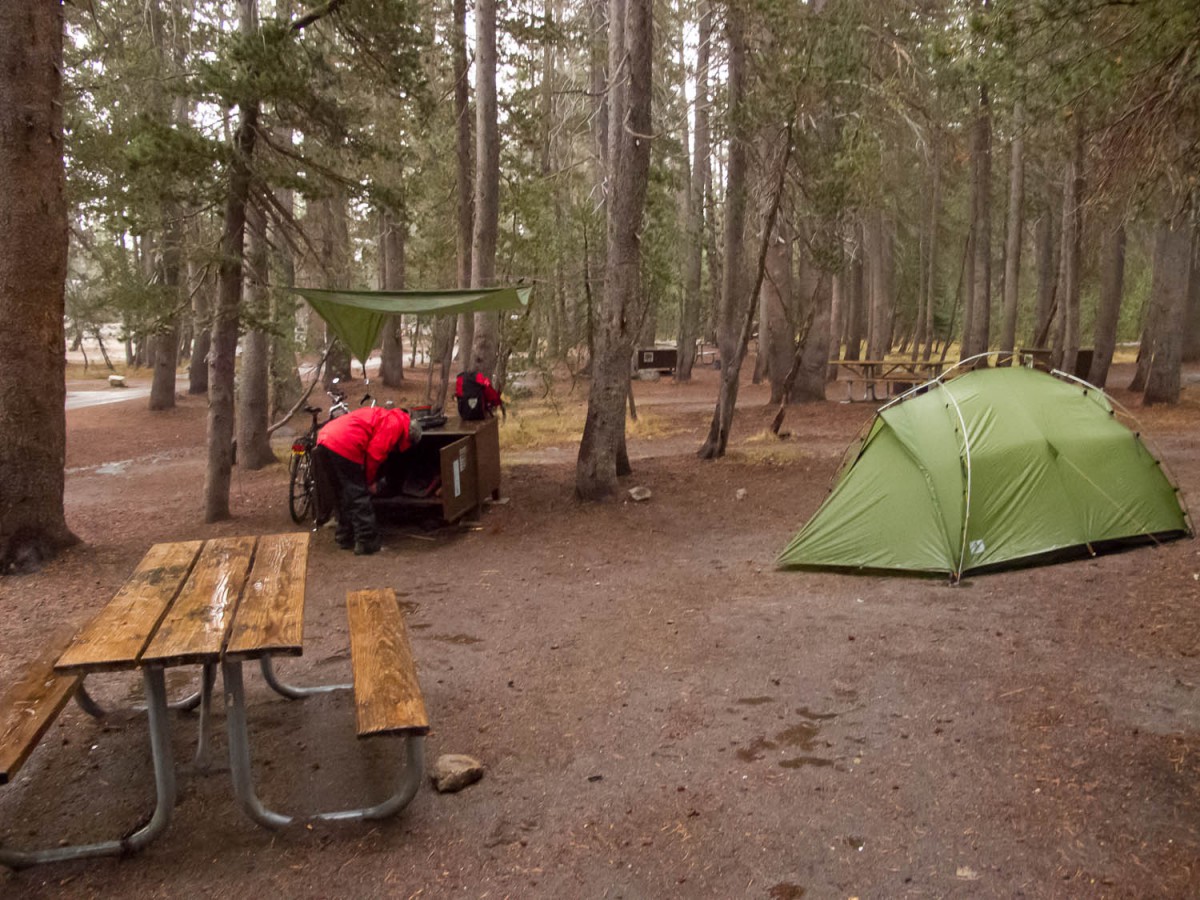 From White Wolf the road maintains a level of more or less  8000 feet. The Tuolumne Meadows sections of 6 kms is (almost) flat. The final 10 kms to the summit are relatively easy. The descent to Lee Vining is spectacular and steep. Only hours after we got to Lee Vining the pass was closed due to the first snow fall of the season. It only reopened two days later. 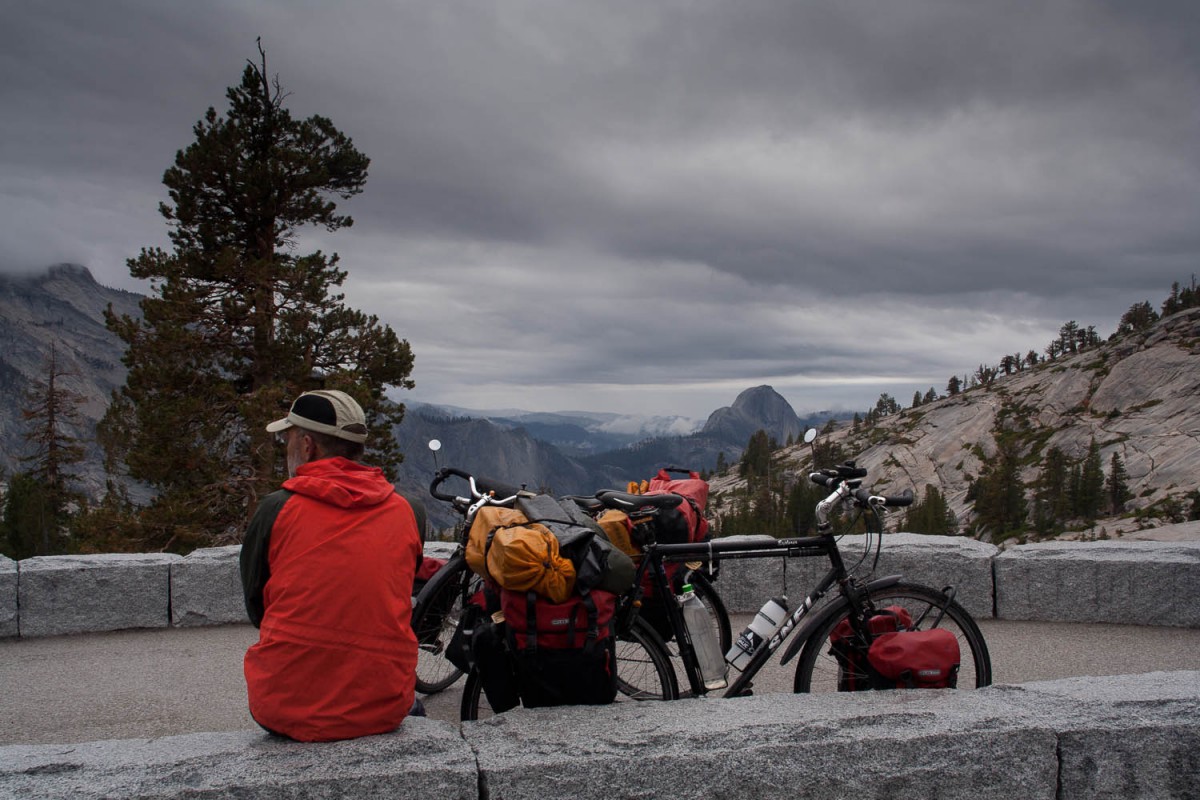 Olmsted viewpoint with Half Dome in the distance, for half an hour it stopped raining 😉 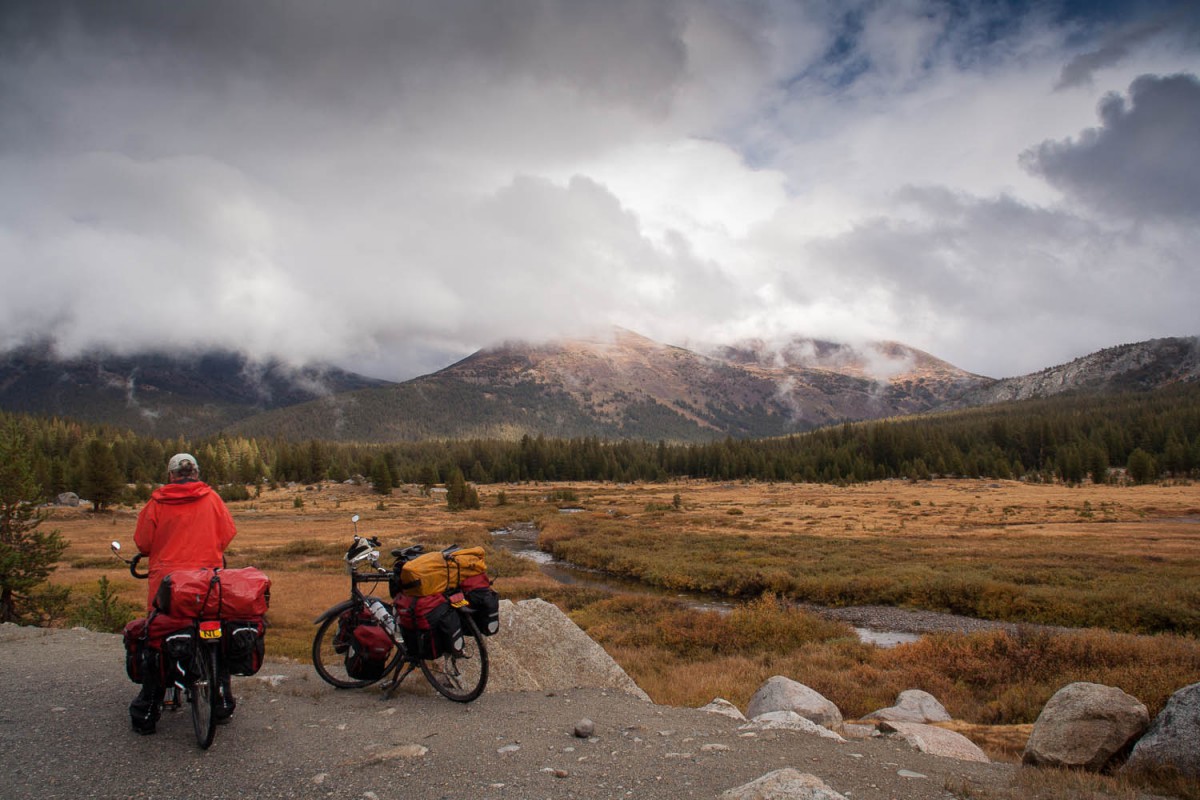 The final miles to Tom’s Place 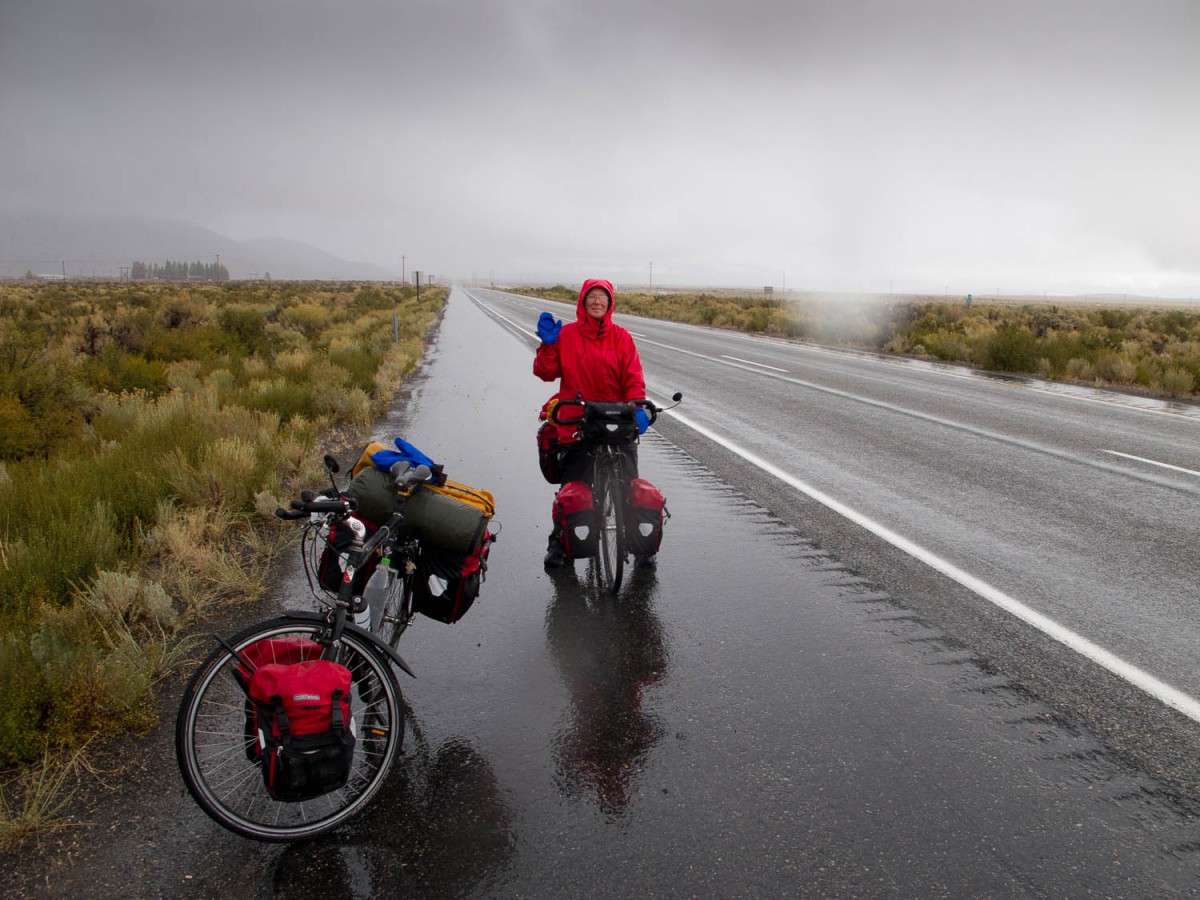 the weather is not getting any better 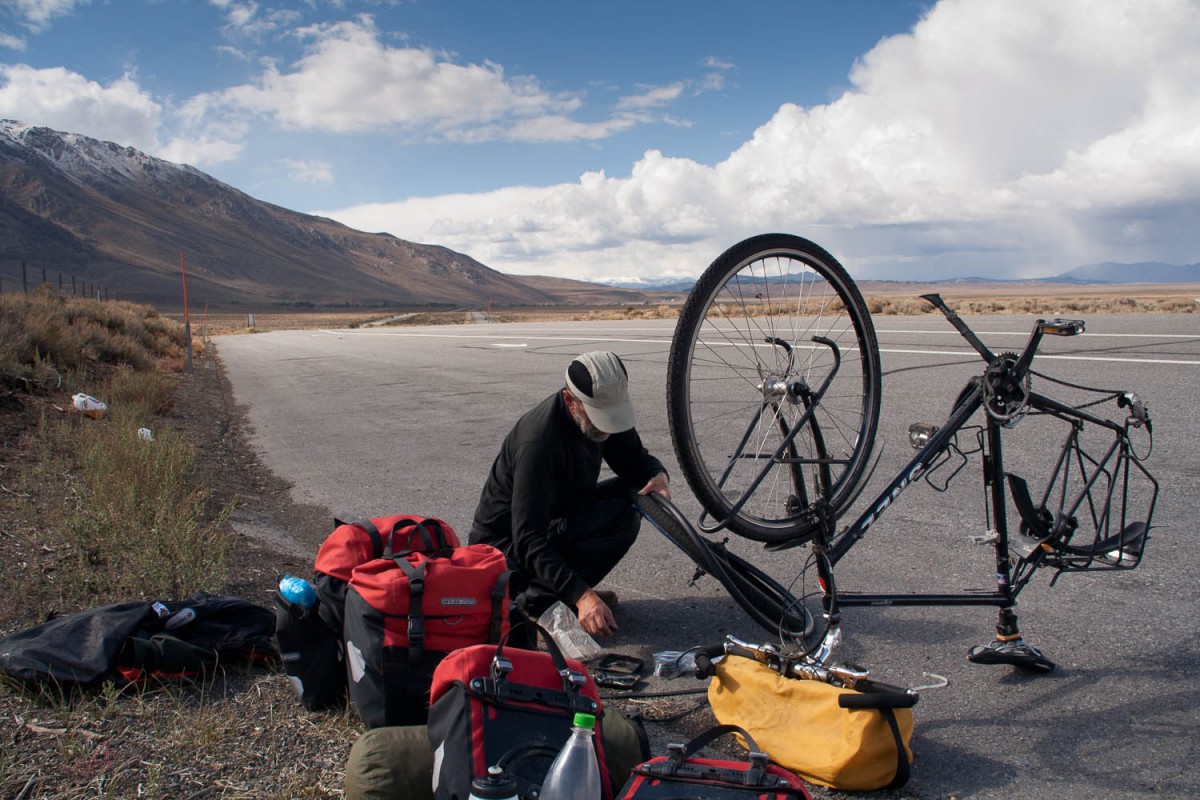 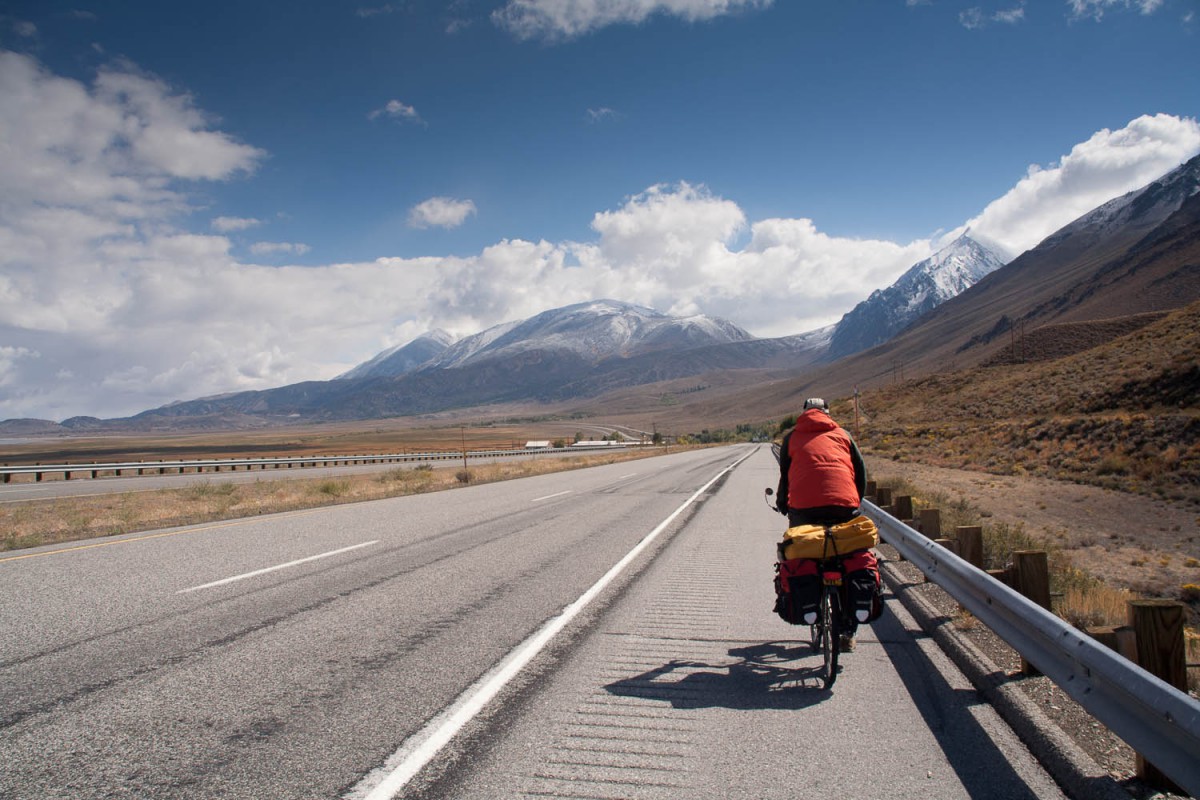 along the main highway 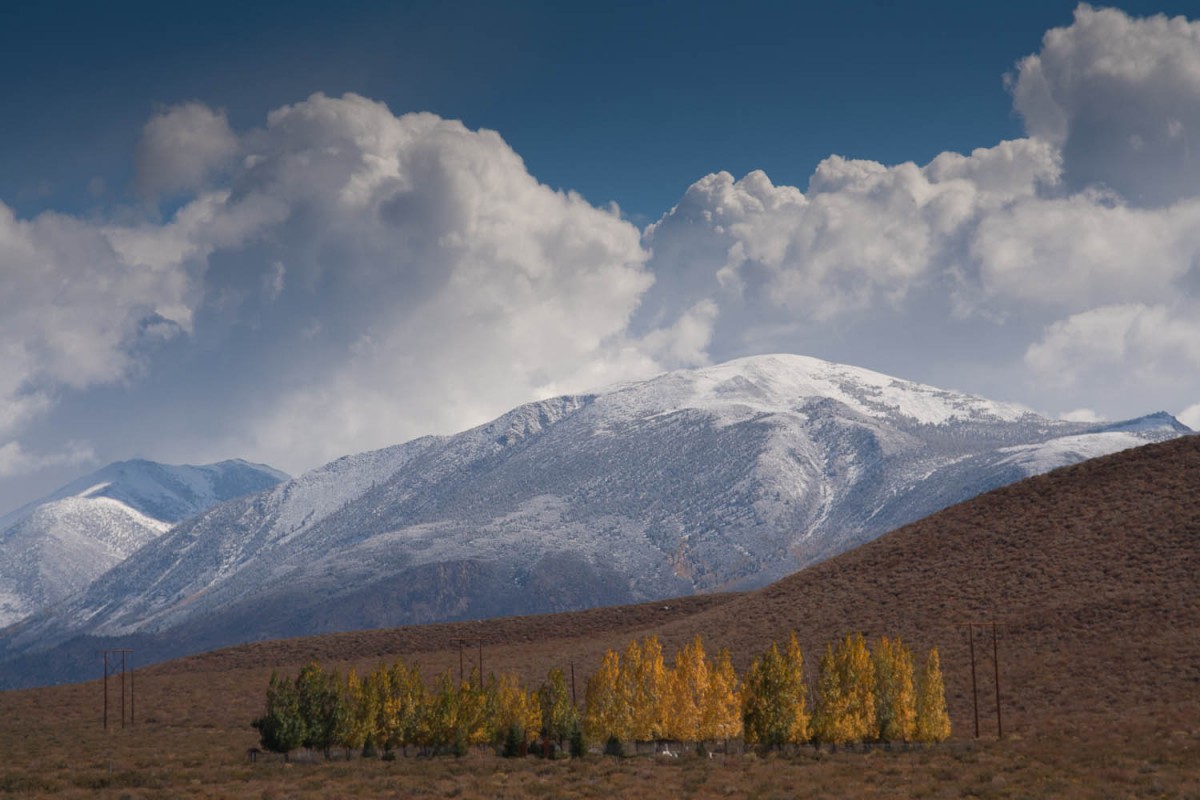 We followed Interstate 395 south. The first section to Mammoth Lakes Junction has some hills to climb but the rest is wide and flat. The Interstate has a wide shoulder and even has “Bike route”  signs along it.  Tom’s Place has a shop, bar and lodge.