Our route in Myanmar

In November 1998 we cycled around Central Myanmar, including highlights as Bagan, Mandalay and Pindaya in our itinerary. On this page you will find a description of the route we followed. 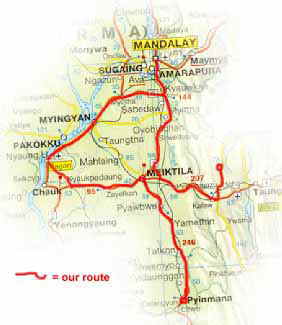 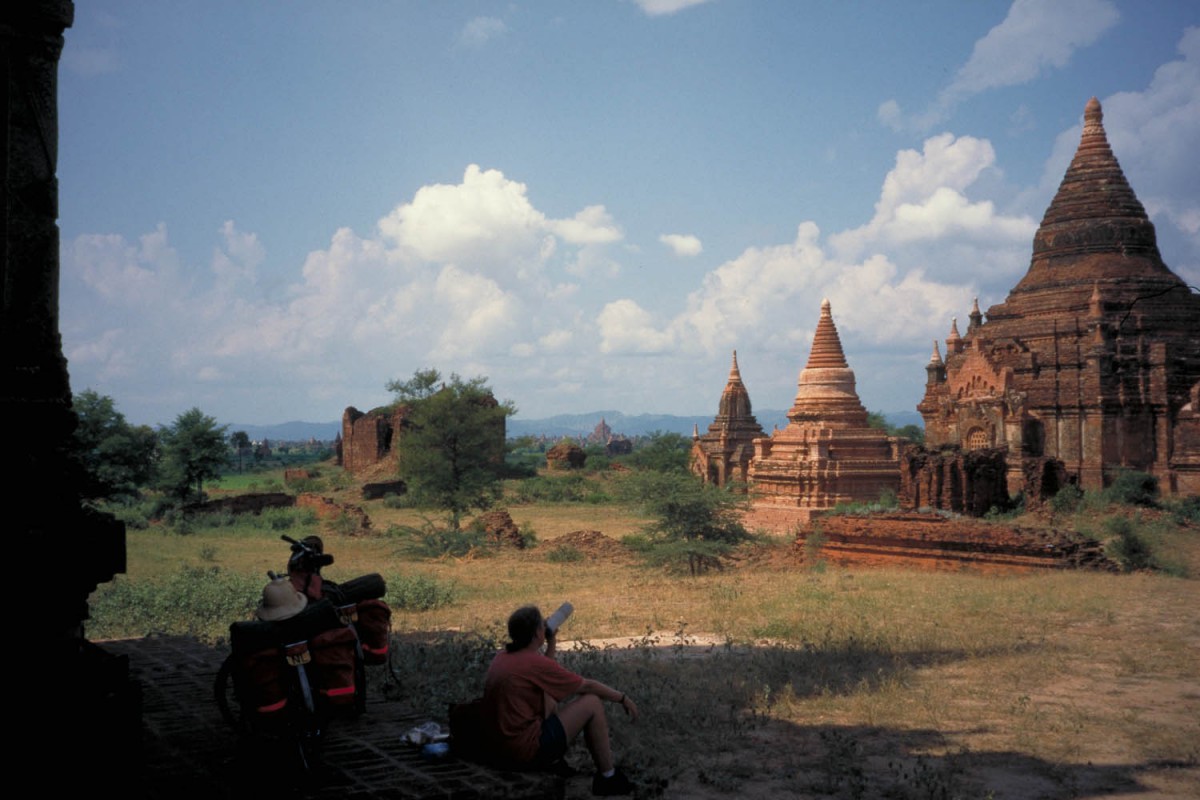 The road we followed north was highway nr. 1; the main north-south road. Despite its importance, this road is never very busy. Its mostly flat all the way to the town of Yamethin. The quality of the road is reasonable.

No licensed accommodation in this town. The Point Guesthouse at the northern end of the main road will accept foreigners though.

The section of road nr. 1 to Meiktila is very similar to the section to Yamethin. In Yamethin are licensed hotels en guesthouses, plenty of shops and good places to eat.

The road to Kyauk Padang carries much lesser traffic then highway nr. 1 but is also much narrower. As all secondary roads we cycled, this road is bumpy and rough. On the way to KP you will have to cross a small mountain-range. About 50 % of this section is mainly uphill. The other half mainly downhill to KP. 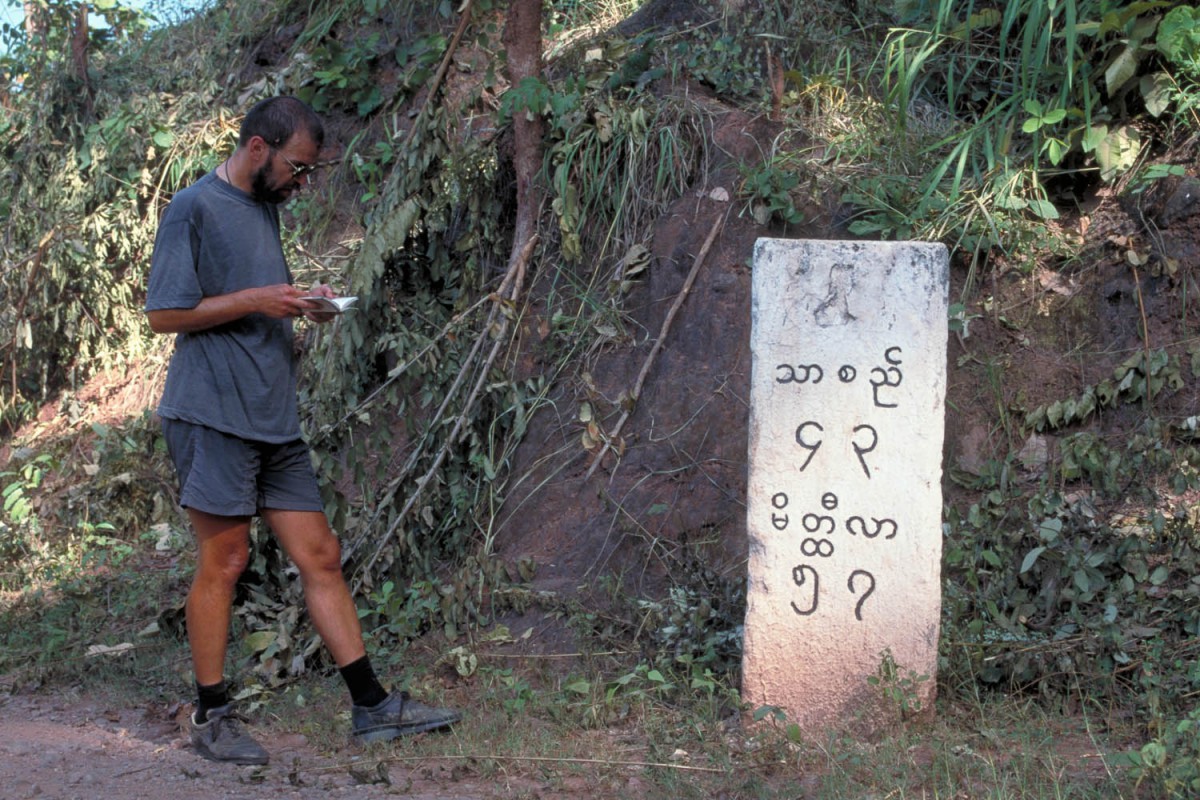 where to go and how far?

No real villages along this road. Drinkingwater en cold drinks are readily available at regular intervals.

In Kyauk Padan is no licensed accommodation available. We found two basic guesthouses, but they are, as one of the owners told us, reluctant to take foreigners because they are “..afraid of the police..” . We went to the police station and asked for permission to stay in one of the guesthouses. They gave us reluctantly permission, only because it was too late to send us anywhere else. 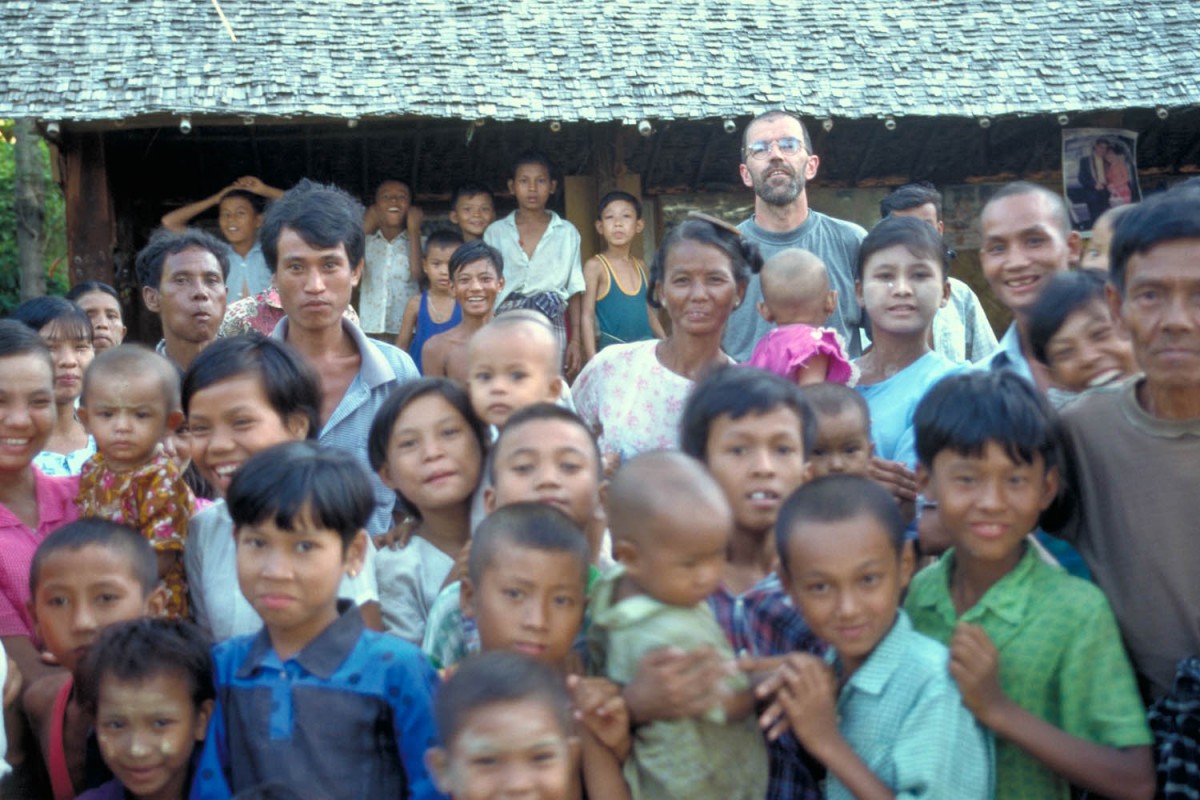 asking direction in a small village is an adventure

After KP a small group of hills is to be crossed; after this it’s mainly downhill all the way to Bagan. When coming from this direction it’s an option to cycle first in the direction of New Bagan (turn left just after the fee-collection gate). In this way you get a great first impression of the Bagan area, cycling past numerous pagoda’s. 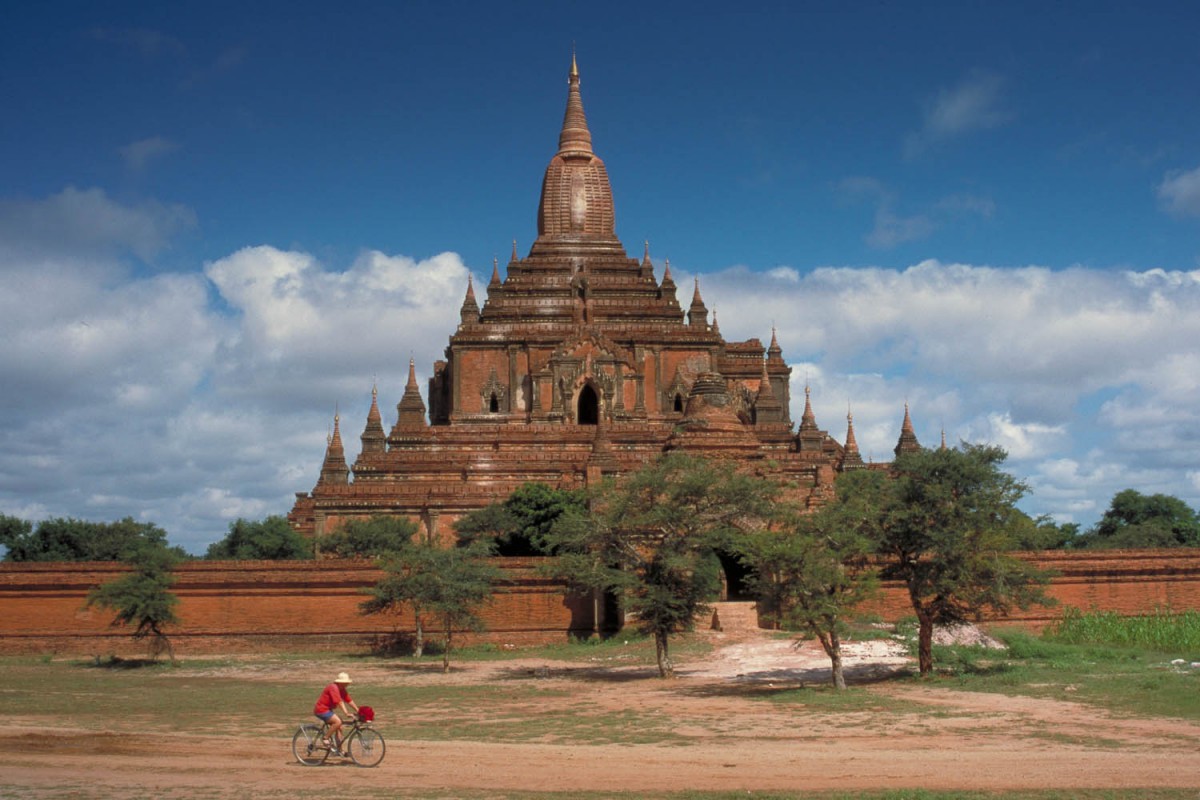 This road ends in New Bagan with a very large number of hotels and guesthouses. We especially enjoyed staying in Old Bagan; it is very central, quiet and peaceful. Not many hotels here and only two places to eat. We recommend the Tanthe Hotel where economy rooms were good value for 14 US$ a double (airco + attached bathroom) . 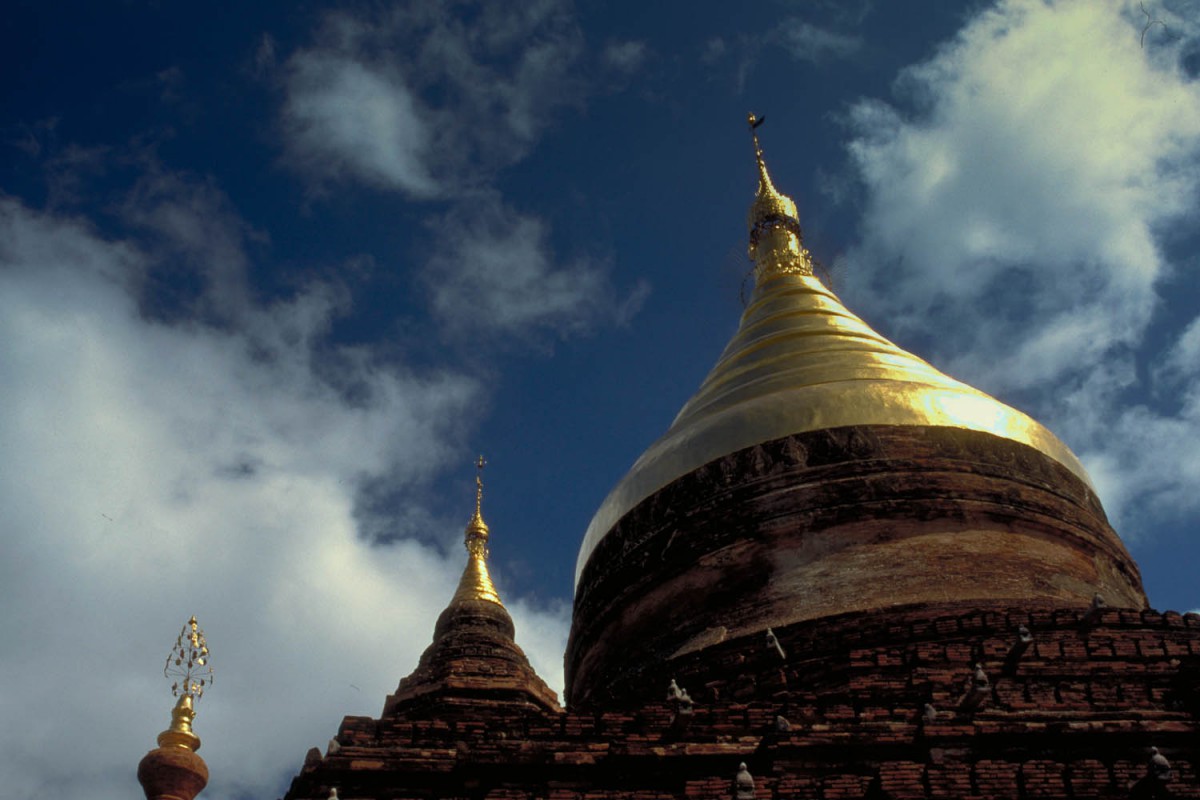 Our map showed an unpaved road leading east from Nyaung U to Myinyang through the village of Ngathayauk. Locals told us about a ‘new’ road following the railway to M. Just outside Nyaung U we arrived at the junction of the new road and the old road (the one that was on our map). The old road looked heavily eroded and barely passable on a touring bike. The new road was wider and smooth. The choice was easy.

The quality of this road was indeed reasonable for many kms. At the village of Letpanchibaw we found ourselves at the banks of the river again. A ferry is leaving from this village to the town of Pakokku. It’s possible to continue to M. but the so-called ‘new’ road becomes an ox cart track. Numerous dry river beds have to be crossed. Cycling was often impossible due to soft sand or extremely bumpy surface. We lost the road several times. Local people brought us back to what they called the Nyaung U – Myinyang Road! 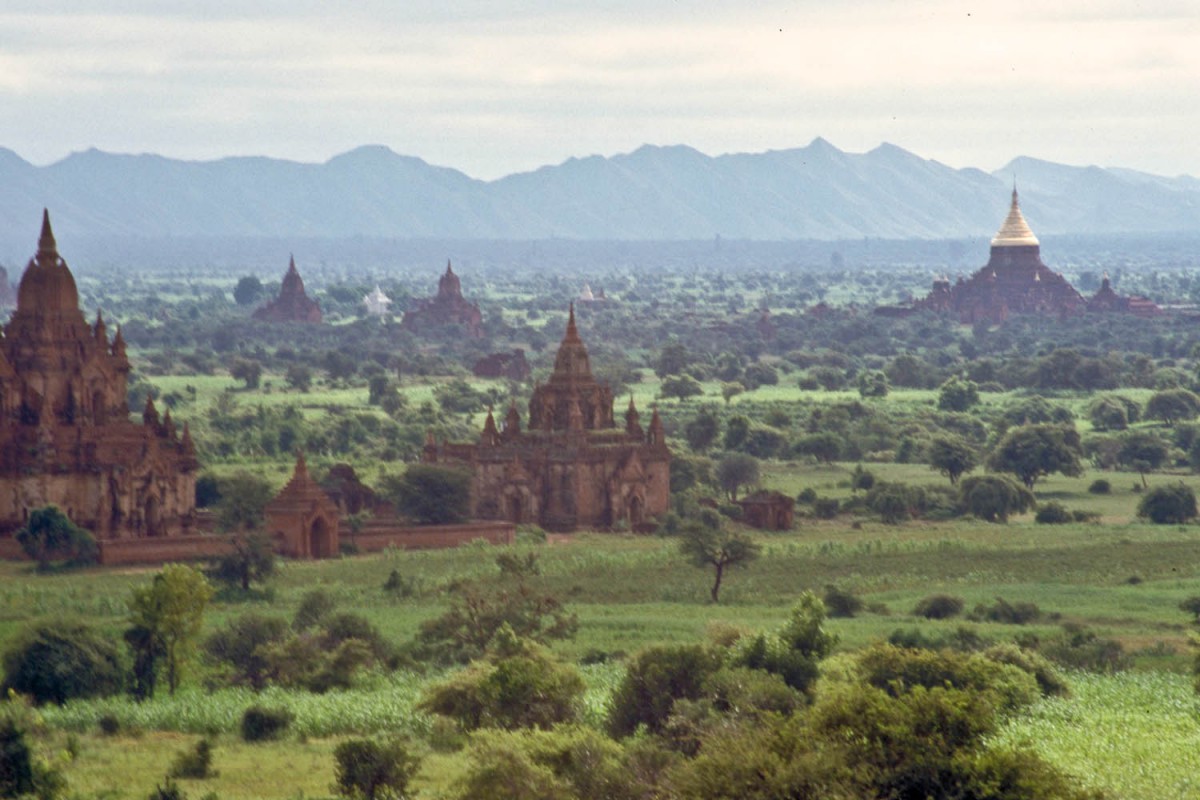 Needless to say we did not make it all the way to M. The sun had set already for one hour and we were still pushing our bikes along bumpy paths and through thorny bushes. Fortunately the moon was full. Then we saw a bright light in the distance. It was a small monastery (only 3 monks) where we were warmly welcomed and stayed that night. The next morning we discovered that we first had to walk across a railway bridge and cycle another two hours on bad roads to arrive in the town of M. proper.

The scenery on this new road was very nice, peaceful and rural, but we strongly advise other cyclists to try another road when going this way.

Update: The new road from Bagan to Myinyan
In January 2001 we received reports from other cyclists who have used this so-called new road without much trouble. It now looks like we lost our way, or the road and signposting have both improved. You should be able to travel to Myinyan in less than a day now.

From M. we continued on a surfaced highway in the direction of Mandalay. The road is narrow and bumpy with virtually no traffic. A nice climb over a small mountain range offers good views at the top. Shortly after the downhill-section the pavement stops. It’s dirt again for many kms. This road was awful; paved with very large rocks it’s almost impossible to cycle. The good news is that there is almost always a small track next to it which is used by local cyclists. The quality of these tracks is reasonable. 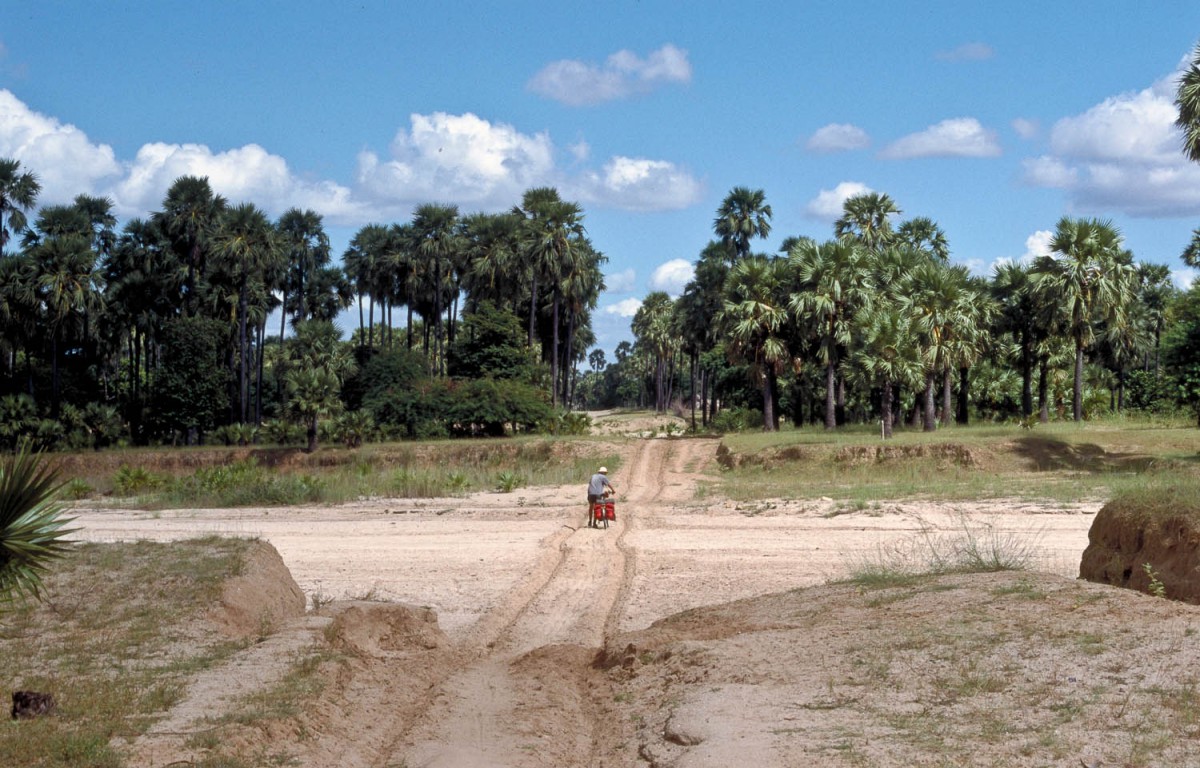 The small town of Myotha has no accommodation to offer. We stayed at a monastery and had a good diner at a small restaurant opposite the railway-station. Those tired of this boneshaking road can take a train to Mandalay or Bagan right here. 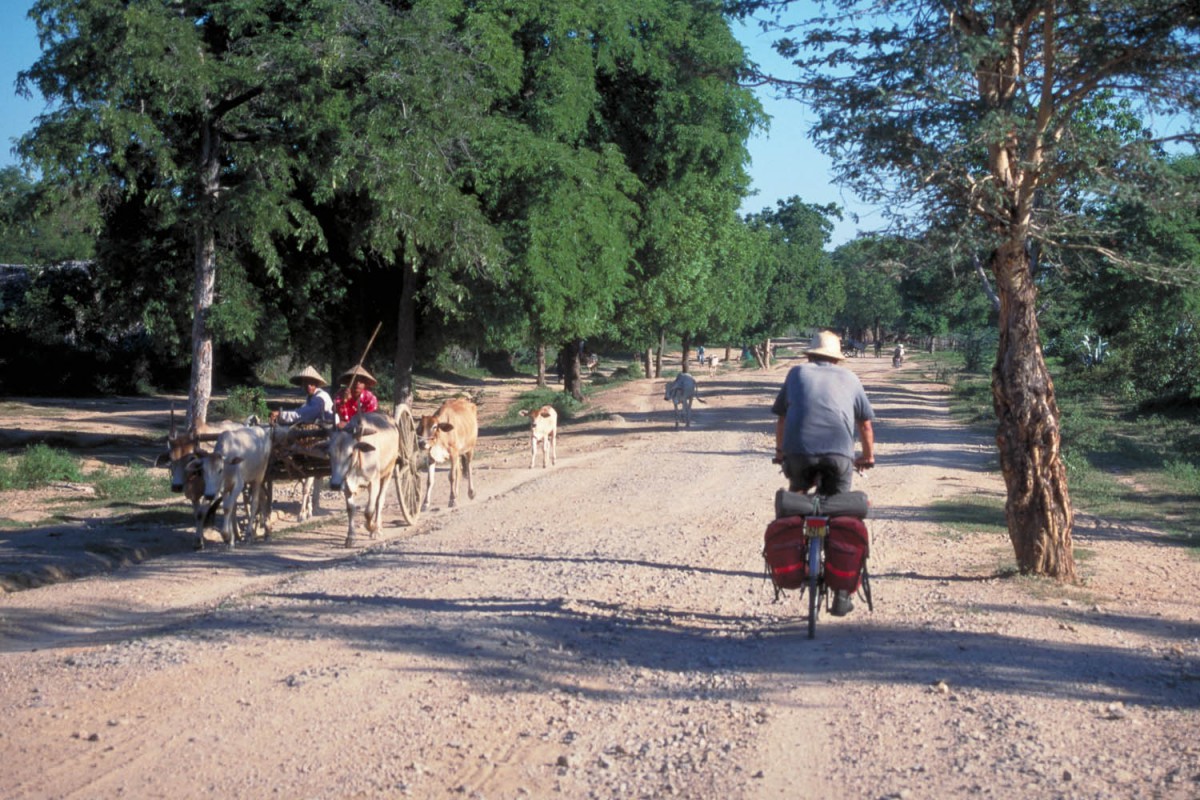 From Myotha it’s another 32 km of dirtroad to the small town of Chaungwa where the pavement starts again. There might be accommodation in Chaungwa as we saw a sign of a ‘resthouse’. Chaungwa is much larger than Myotha.

Although paved, the road remains narrow and bumpy, apart from one opportunity to have some real smooth cycling. About 15 km before Kyaukse the new Mandaly International Airport is under construction. The road was detouring around it but we followed local cyclists and ended up riding more than 2 km over the new super-smooth runway. Quite an experience!!! We also saw a new road to Mandalay being constructed. This new road is going to connect just south of Mandalay to highway nr. 1. 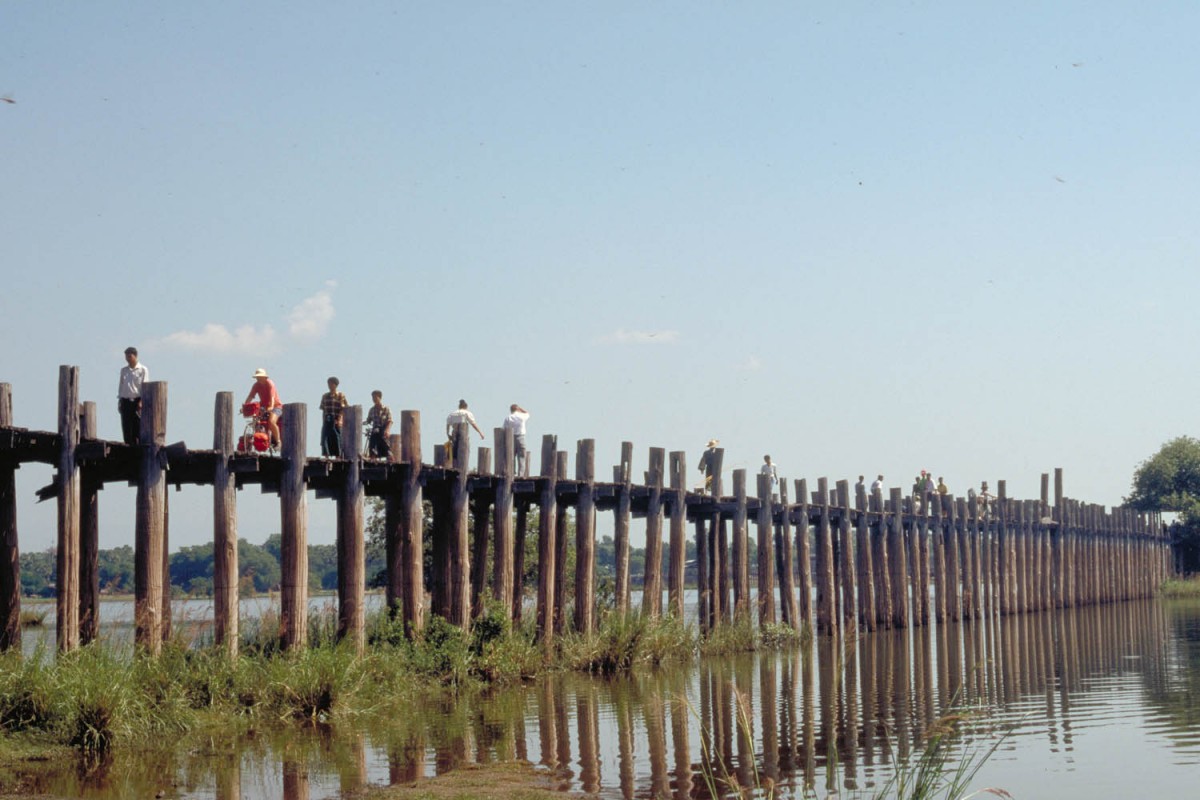 Cycling again north on main highway nr. 1 we easily reached the outskirts of Mandalay. Coming from Kyaukse there is plenty of time left to include places like Sagaing, U Bein Bridge etc. and still arrive at a decent hour in Mandalay. Mandalay is a sprawling city. We found accommodation relatively expensive in Mandalay.

Cycling south on highway nr. 1 we were able to cover some real distance. With Kyaukse Wun Dwin is the only town of significance on the road from Mandalay to Meiktila. There are no hills to climb and the quality of the road is quite good. The first 45-50 km the road is still busy with traffic to suburbs. After Kyaukse most of the traffic is gone.

At Wun Dwin we found no licensed accommodation, but it is possible to stay at the friendly Kyaw Aye Guesthouse at the northern end of town. The owner is very helpful and speaks good English.

About 18 km south of Wun Dwin is a shortcut to Thazi, enabling to avoid Meiktila on the way to Thazi. This narrow and bumpy but paved road ends just before Thazi. The distance Wun Dwin – Thazi is approx. 35 kms.

The road beyond Thazi remains narrow and very bumpy. Accommodation in available in Thazi itself. The next licensed hotels are in Kalaw; 95 km further and at an altitude of 1325 m.

Along this road are a number of villages, all without licensed accommodation but all with a small monastery. We stopped at Pyin Nyaung, which is one of the larger villages on this road.

The first 20 kms the road follows a river. Grades are never steep. Just after the official border of the Shan State (English sign!) the final ascend begins. In about 25 kms the steep and very winding road takes you to Kalaw. All traffic on this road is very slow. Our bus (on the way back to Yangon) took 1½ hours to cover the 25 km’s downhill!
In Kalaw are numerous good places to stay; many new hotels were build in the past few years.

The first 10 kms to Aungban are mainly downhill. The junction to Pindaya is clearly signposted in Roman script. The road from Aungban to Pindaya follows a plateau: views all the way and short climbs. Many villages along this road but not much available to eat or drink. 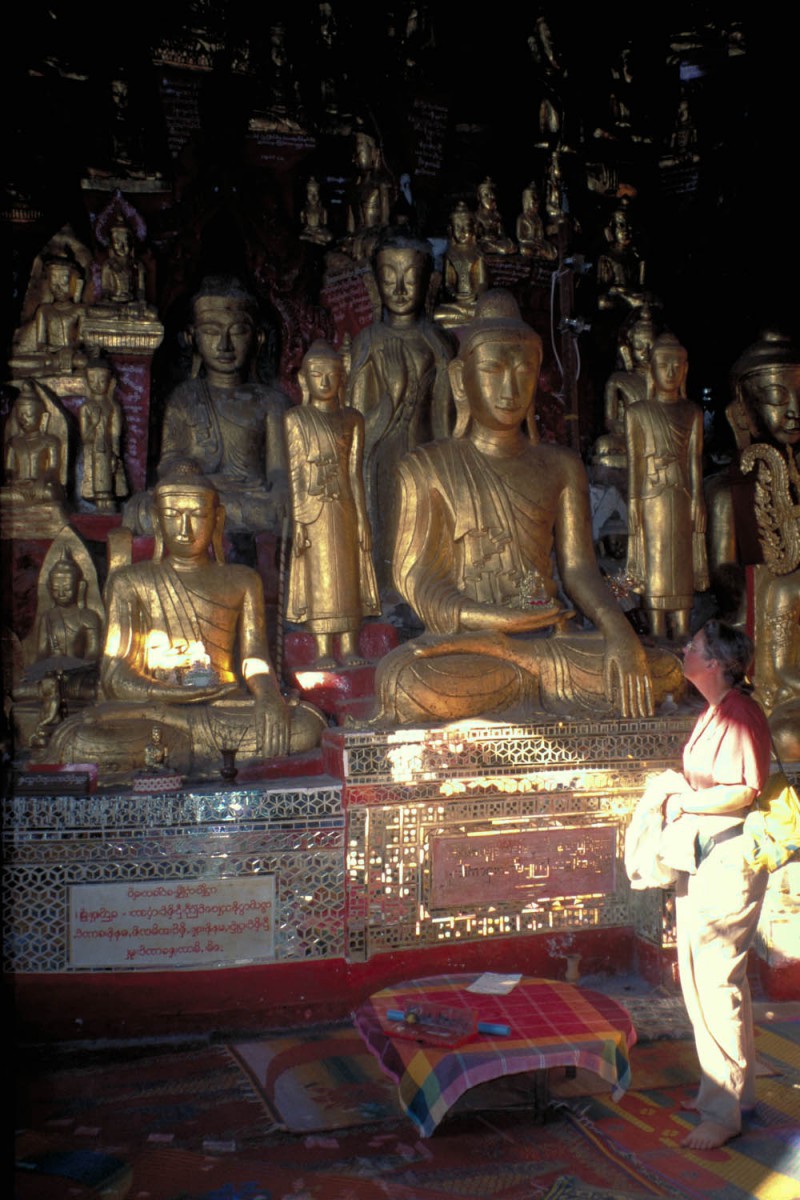 From Pindaya we continued by public transport back via Bago and Kyaktio to Yangon.

Myanmar is a great country to cycle. The people are friendly and helpful, the scenery beautiful, the sights great. If your time is limited, we advise you to go to Bagan and skip the Inle Lake area.