Our route in Iran

We cycled in Iran in october 2015. In four weeks we cycled some 1100 kilometres from Kashan to Shiraz. Iran is not a perfect country for a cycling trip: lots of desert and sometimes very heavy traffic. But Iran offers compensation for these nuisances: the most friendly people we ever met and one of the oldest cultures in the world. This route links the cities with the gems of this culture: Kashan, Isfahan, Yazd and Shiraz.

After arriving on Teheran International  Airport we used an already booked taxi to travel the 200 kilometers to Kashan. Kashan seemed to us a much nicer place to start a bike trip than the traffic madness of the capital itself.  There is plenty to see in Kashan and there are some nice hotels as well.

Check out our the exact route on Google Maps.  This map also shows info on where we camped and some additional information.

We used to old Isfahan road to travel to the  picturesque mountain village of Abyaneh. The road doesn’t carry a lot of traffic but there are some hills just after you pass Kashan airport. 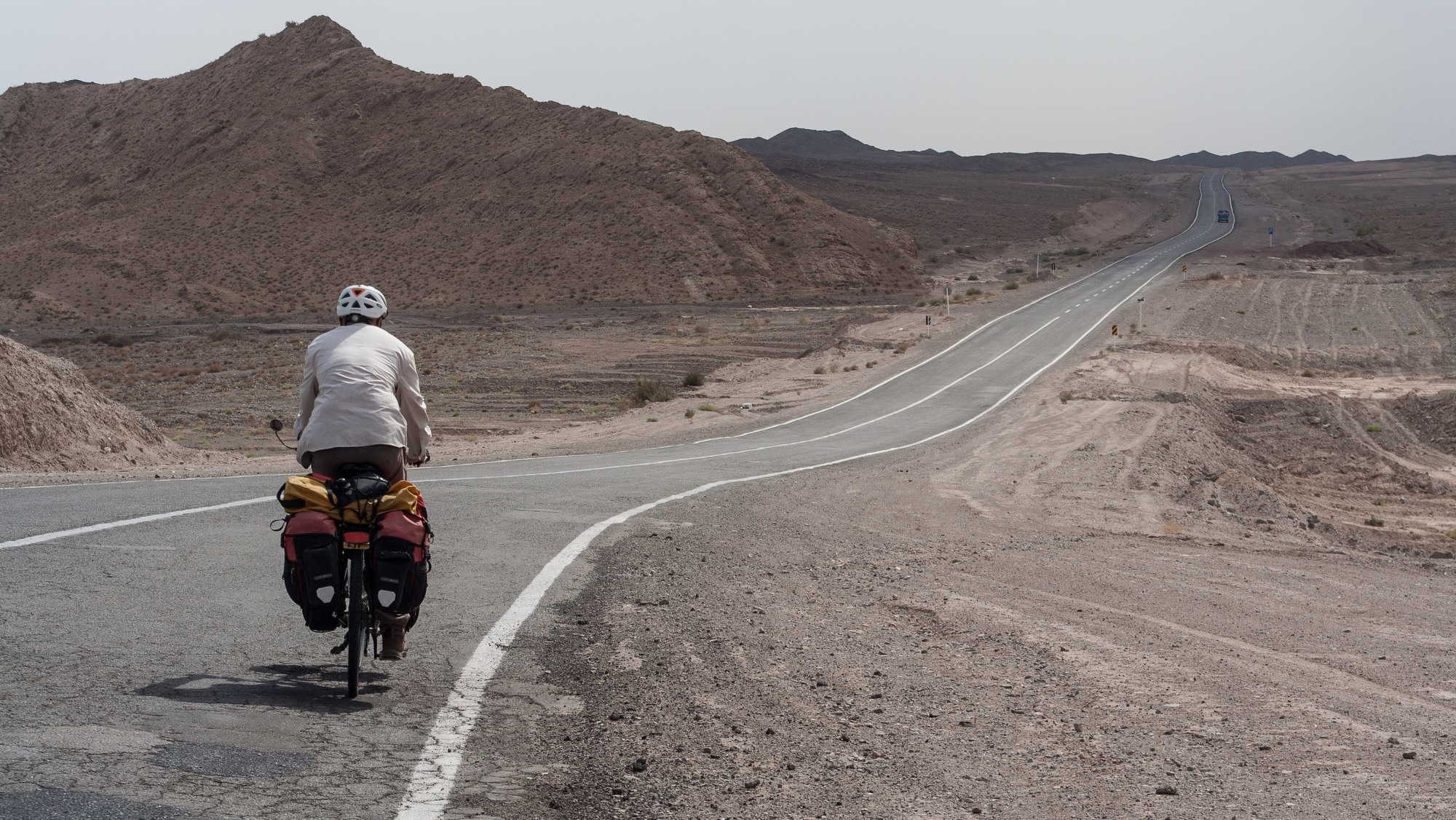 The road from Kashan to Abyaneh

Already on our first cycling day we  were stopped by military police. Our passports were checked,  our pictures were taken and they wanted to browse the images on our camera. After this inspection we were ‘offered’ a ride because a few kilometres down the road was the Natanz nuclear plant. It seems to be standard procedure to offer this service to cyclists here, as we were not the first nor the last to get this reception ;-). The plant itself can be looks more like a military base than a plant. It is surrounded by many anti-aircraft guns. Iran claims to have shot down an Israeli drone here in 2014. Don’t take any pictures here. 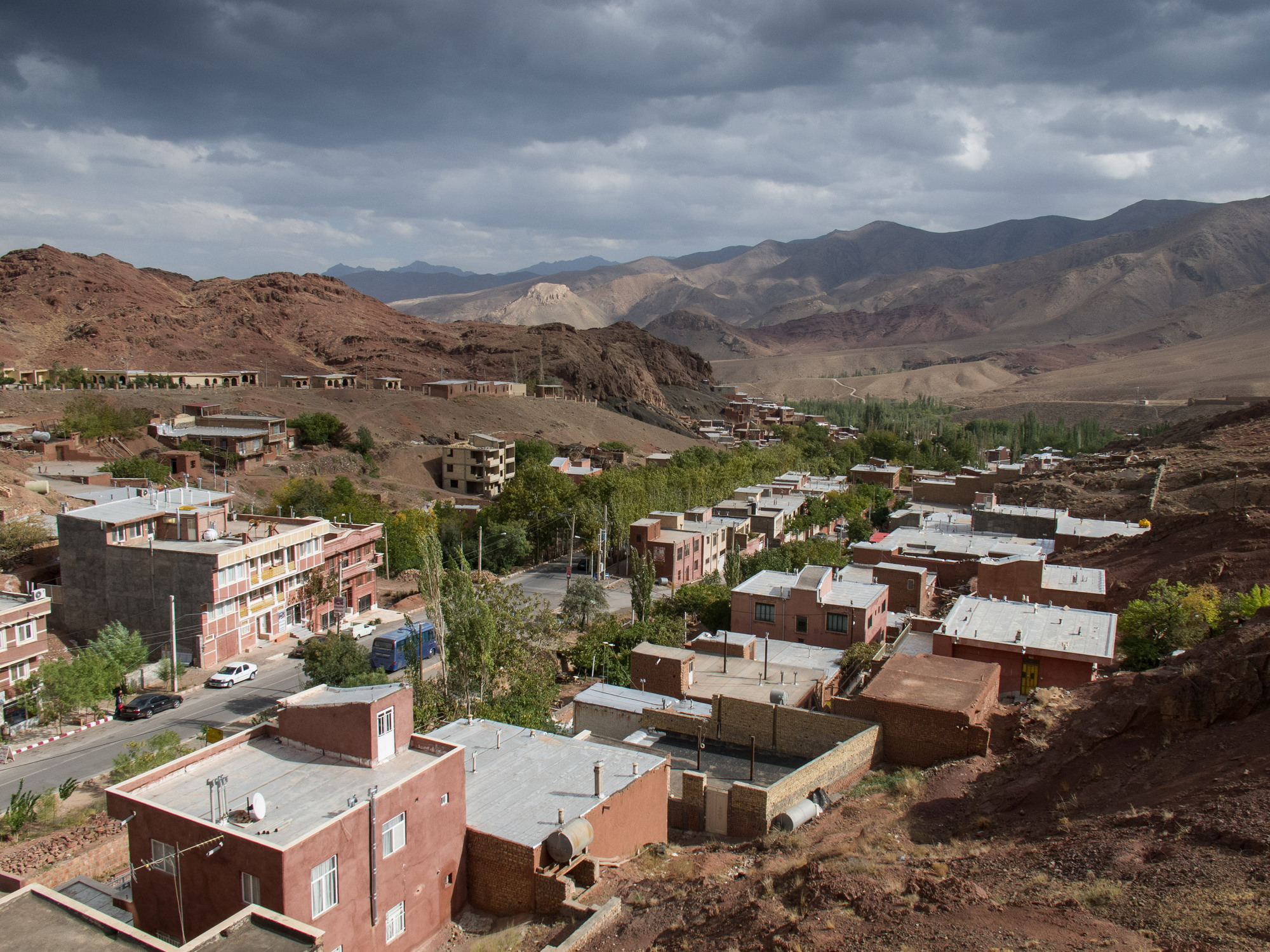 The climb to the mountain village of Abyaneh is pleasant. Unlike the dusty plains below this road is lined with green fields and plenty of trees. The village is at 2200 m, so nights are much cooler here than in Natanz. The Abyaneh Hotel offers good rooms and the village, although touristy, is worth a visit.

The town of Natanz offers plenty of shops to stock up your supplies. Beyond Natanz is a large area with fruit orchards. Finding a good place to camp here can be difficult because of the fences. 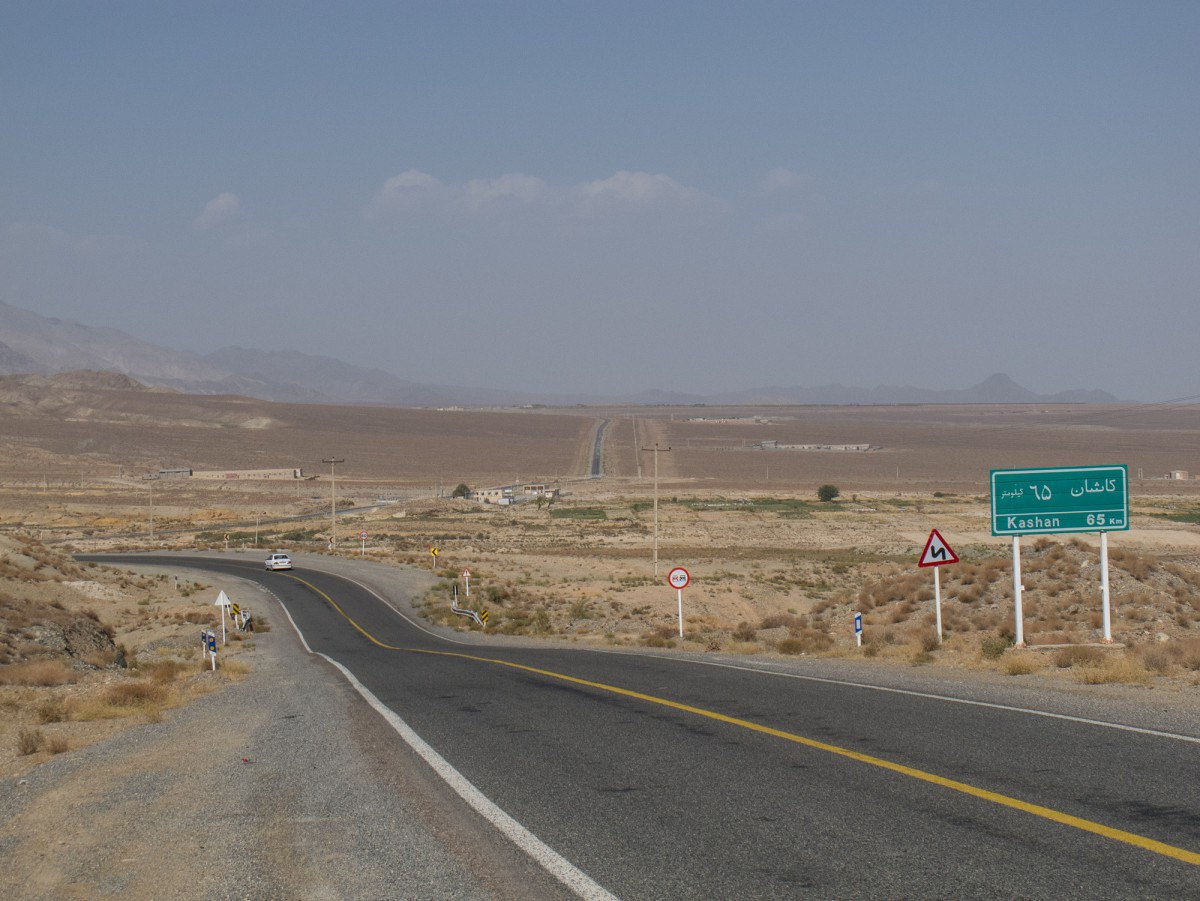 The old road to Isfahan is generally very quiet

Untill Murchenkort the cycling was nice with a good road and not too much traffic. Although there was a constant flow of large trucks carrying huge blocks from a  local quarry. Murchenkort is on the junction with the very busy highway 65. Hundreds of trucks travel on this road making cycling much less than enjoyable. After a few kilometres we decided that it would be more pleasant and safer to hitchhike.

Once in the city centre of Isfahan the cycling is, despite the chaotic traffic, much easier. There are almost no trucks and because of the traffic congestion cars drive slowly.

To avoid the (probably) busy highway 62 east to Naïn we decided to take the alternative road via Varzaneh . First of all just follow the park on the south bank of the Zayandeh River. The cycling is very nice here with even some real bike tracks on the way east. The park ends at far eastern side of town.

After a few miles you can leave Isfahan city behind and follow a relatively quiet two lane highway to Ziar and Varzaneh. There are plenty of villages along this road that leads through an agricultural area. Finding a good camping spot requires some patience here. 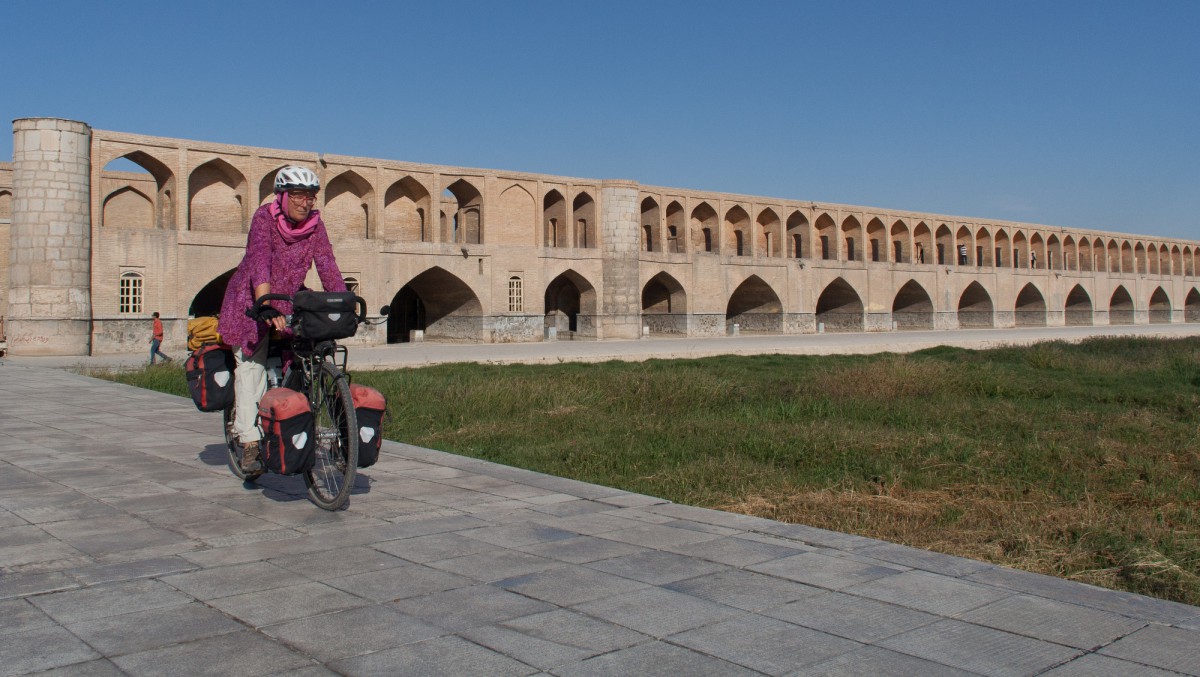 Varzaneh is the largest town in this area.  Near the river is a  nice little park that may be suitable for camping.  The stretch north of Varzaneh crosses a desert. There are almost no villages or services. It’s dry and dusty again.  This road is one lane only but sees few traffic until you hit the big highway 62.  From this junction it’s a nice 30 kilometres mostly downhill to pleasant Naïn. Naïn has a small Tourist Inn with good value split level rooms. The restaurant can be extremely busy at lunchtime as several tour buses stop here. 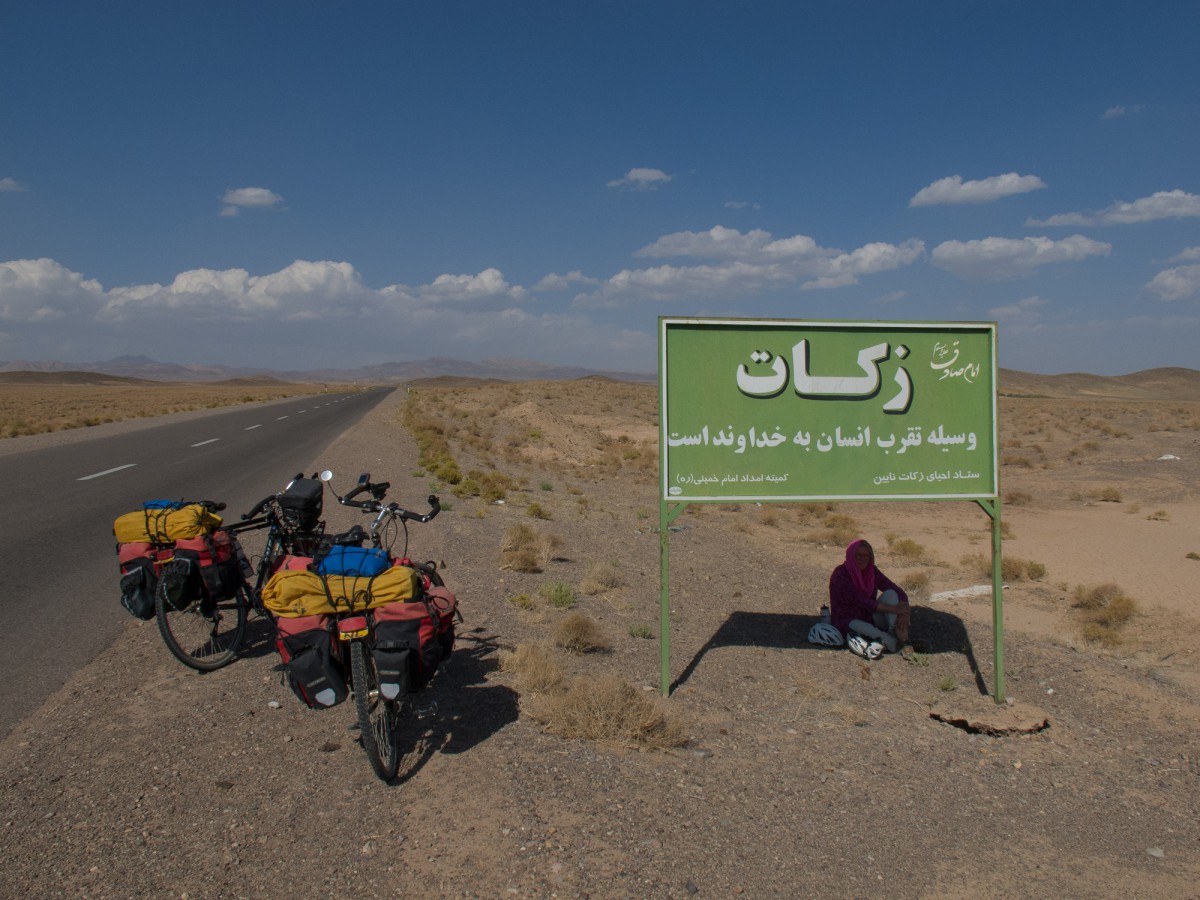 The Naïn to Yazd highway is once again one of those truck infested two lane highways. Fortunately it has a shoulder all  the way. It’s all desert and no services until you reach Aqda (with a traditional hotel) 70 kilometres south.  The road very slowly descends towards Yazd.

Finding a good camping spot requires again some patience. We discovered that many of the large factories along this road have small replanted forests around them that are suitable for camping out of sight. Put up your tent as far away as possible from the road as the traffic continues all night.

Crossing the cities of Ardakan and Meybod was easy, good wide roads and a moderate amount of traffic as all trucks are diverted around these towns.

The two lane highway with relatively narrow shoulder is moderately busy with both trucks and cars.  The next town is Taft.  Taft has a hotel at the Yazd side of town. The climb all the way to a pass before Deshir is very gradual, followed by a short and steep descent into the village of  Deshir (some shops). The desert starts here again and the road very slowly keeps descending for the next 10-15 kms. This 2-lane highway here has no shoulder but carried few cars. 15 kms beyond Deshir is a shop and restaurant. After that there is just desert until Abarkuh. 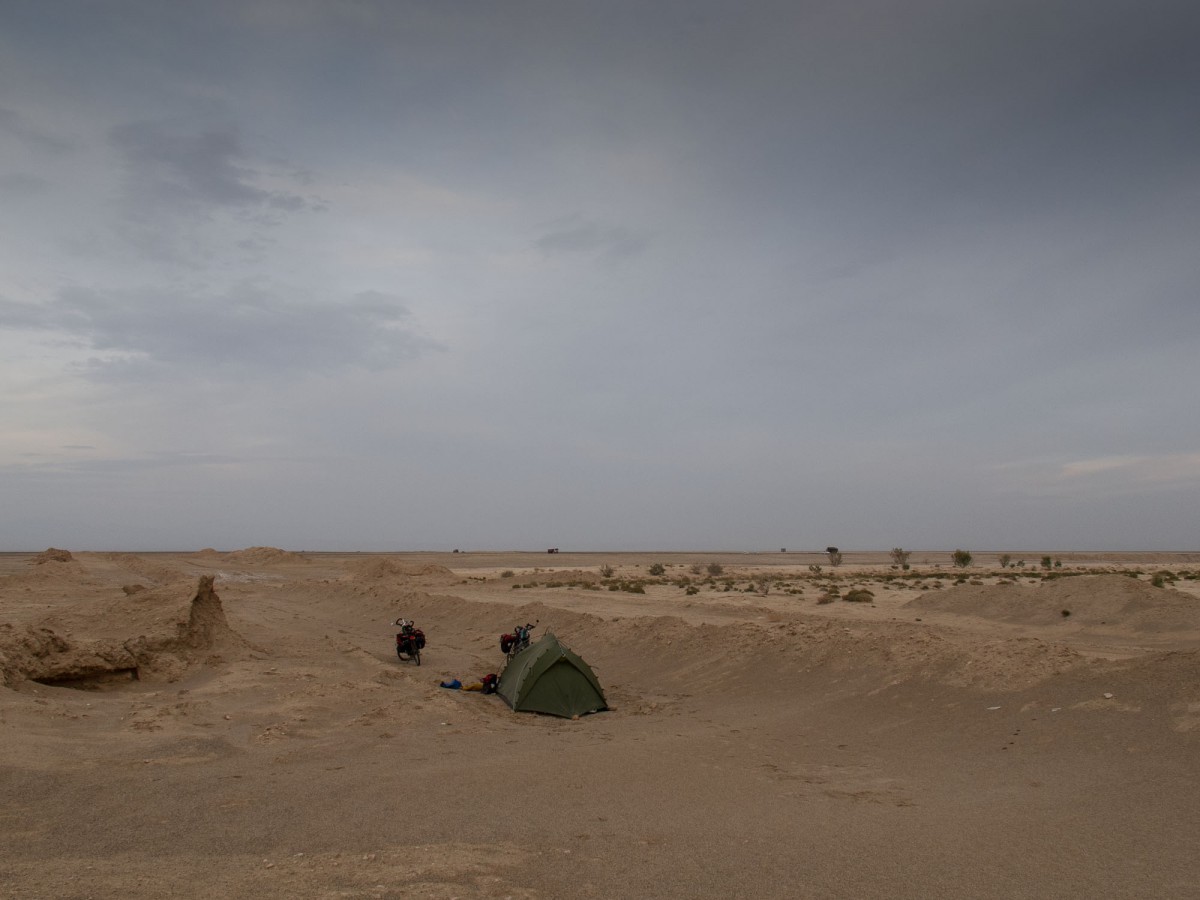 Camping between Yazd and Abarkuh 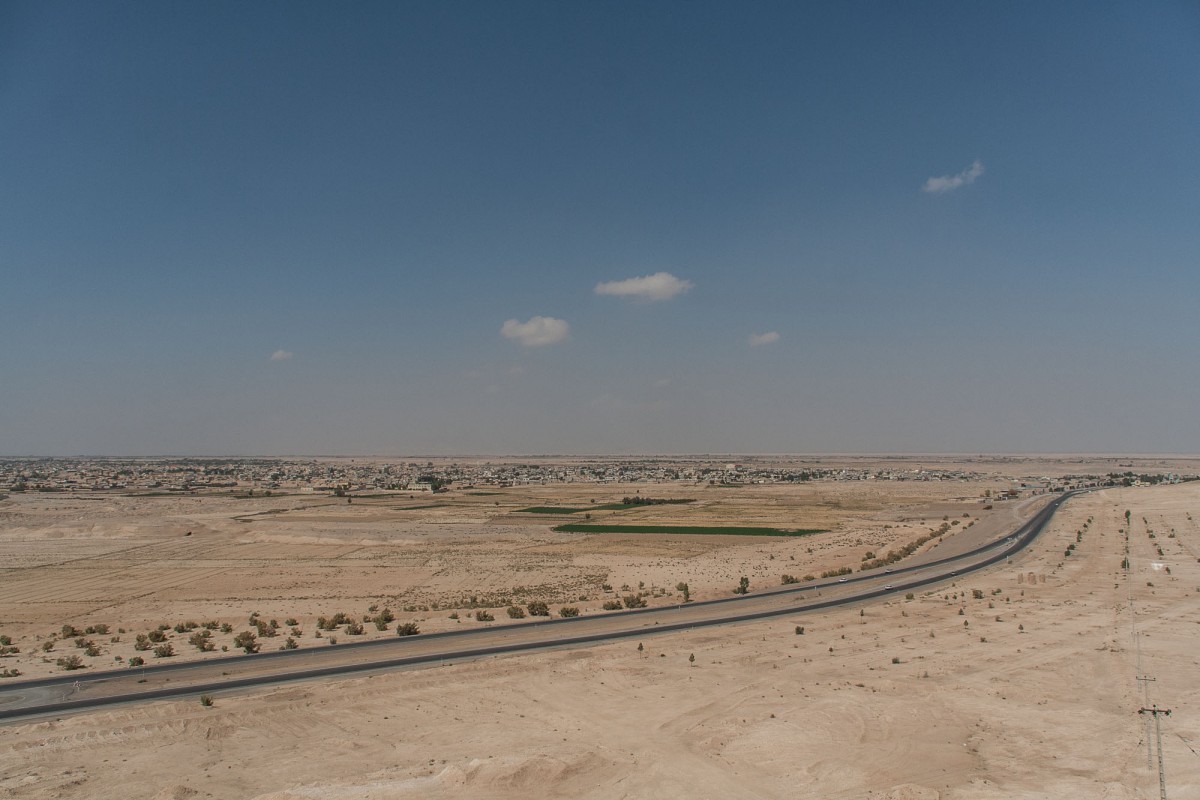 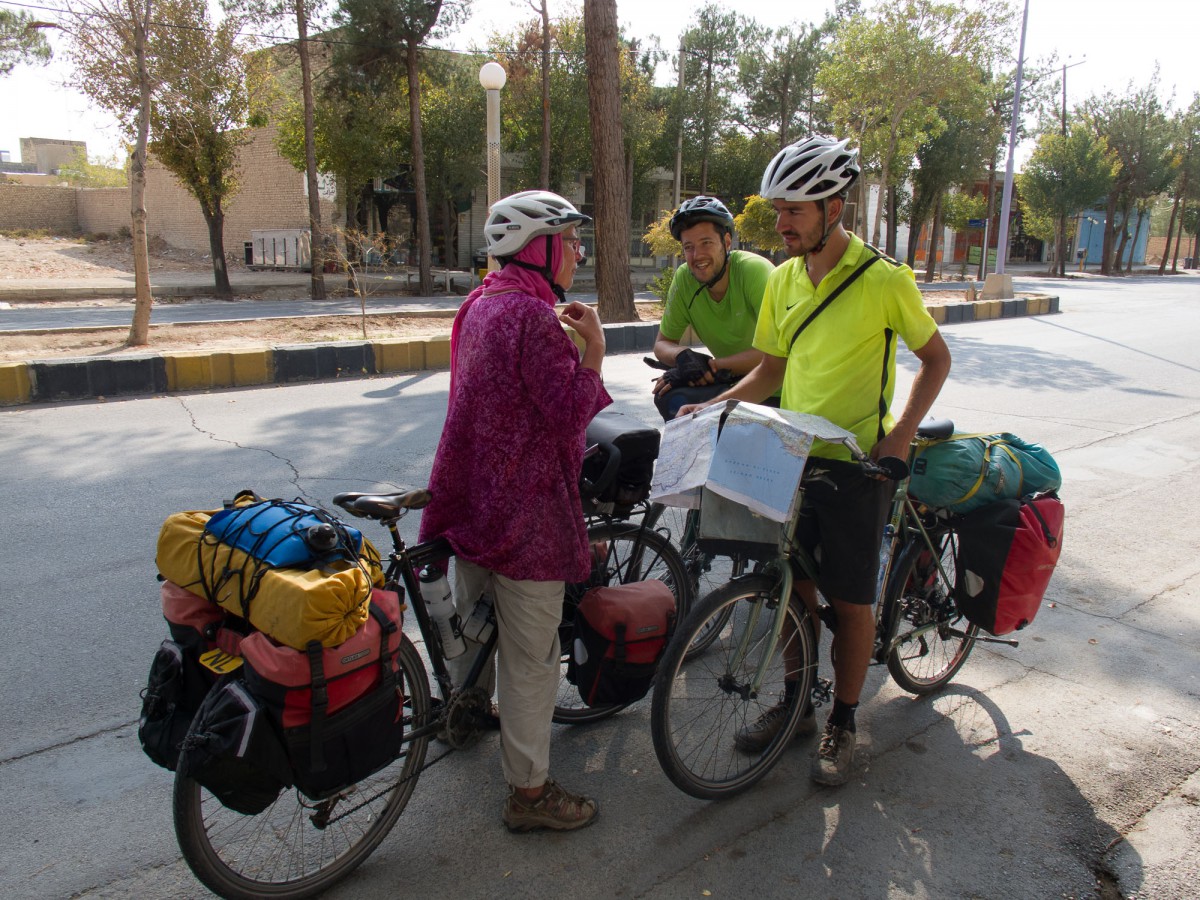 The only other cyclists we met in Iran (in Abarkuh)

Abarkuh itself is a small town. The hotel listed in some guidebooks has closed long ago but there seems to be a guest house. We camped in a  park just west of Abarkuh.

Our plan to go south

Our initial plan was to turn south at Abarkuh and take a shortcut (dirt)road through the mountains. Just before the village of Mehrdasht we were stopped by the police and told that this road was too dangerous. The police officer made ‘cut throat’ gestures to illustrate his story.  Although we had doubts about the “danger” we decided to turn back and travel via Surmaq instead. The language barrier prevented us from getting reliable information about the so called dangerous situation here.

We woke up on the 10th day of the holy month of Moharram (Ashura). The roads were really completely deserted during the morning and most of the afternoon. There is a gentle climb to the cross roads town of Surmaq, The hotel just south of the junction has closed some years ago. The only alternative here is the hospitable home of Sassan Assidi a bit further south (see our map). Sassan and his family are extremely friendly people who let us and in the past years dozens of other cyclists and other travellers stay at their farm. Check out his impressive guestbook!

South of Surmaq the trip started with approx. 40 kms of gentle climbing road. This main highway is usually very busy with trucks and cars but it has a good shoulder. After the gentle uphill a 5 kms steep climb follows, starting at the Red Crescent building. After that it’s 15 kms downhill into Safashar. Safashar features the very nice Saadi Park with green lawns and shady trees. Drinking water and toilets available here. 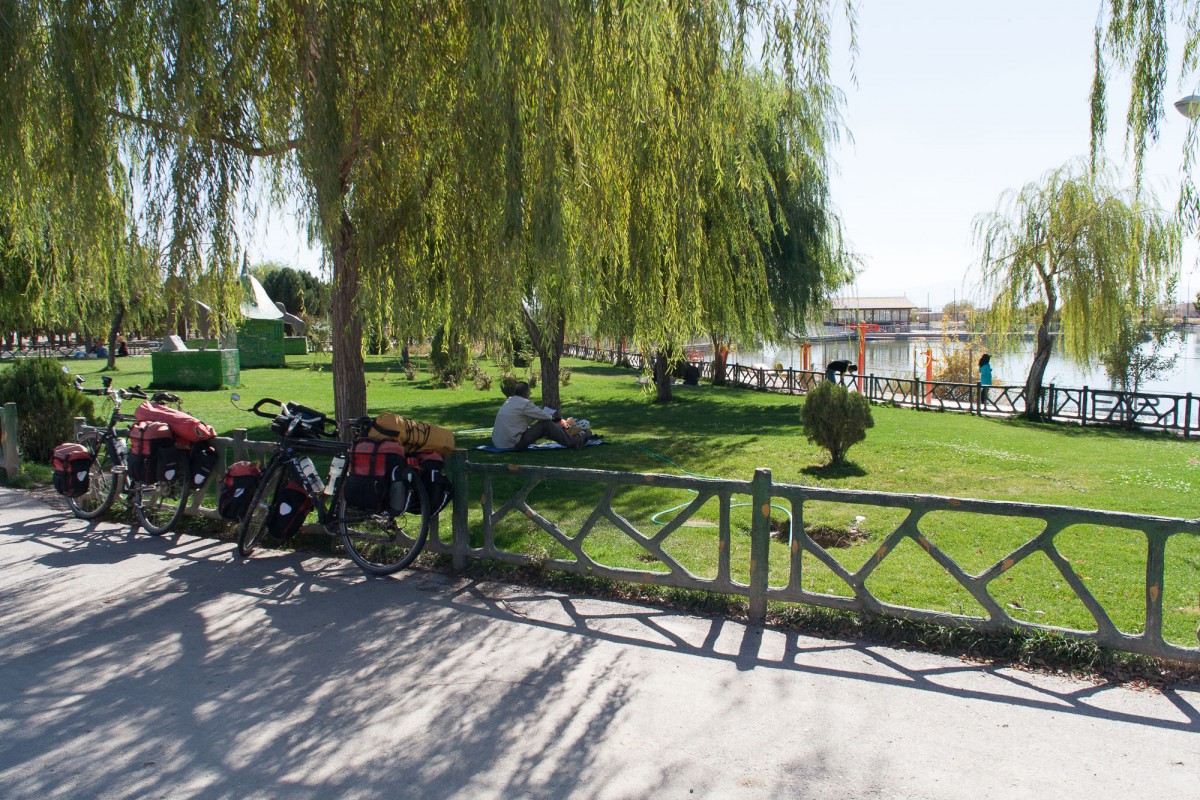 Saadi Park in Safashar. A great spot to take a break!

20 kms south of Safashar is the turnoff to a recommended and much quieter road to Qaderabad. The turnoff itself is not very obvious or signposted so check out your map or GPS.  The camping spot mentioned on the Travelling Two website is nearby.

Following the road you reach Qaderabad enjoying some nice mountain scenery on the way.  Just north of the archaeological site of Pasargade you’ll get back to the main highway again. 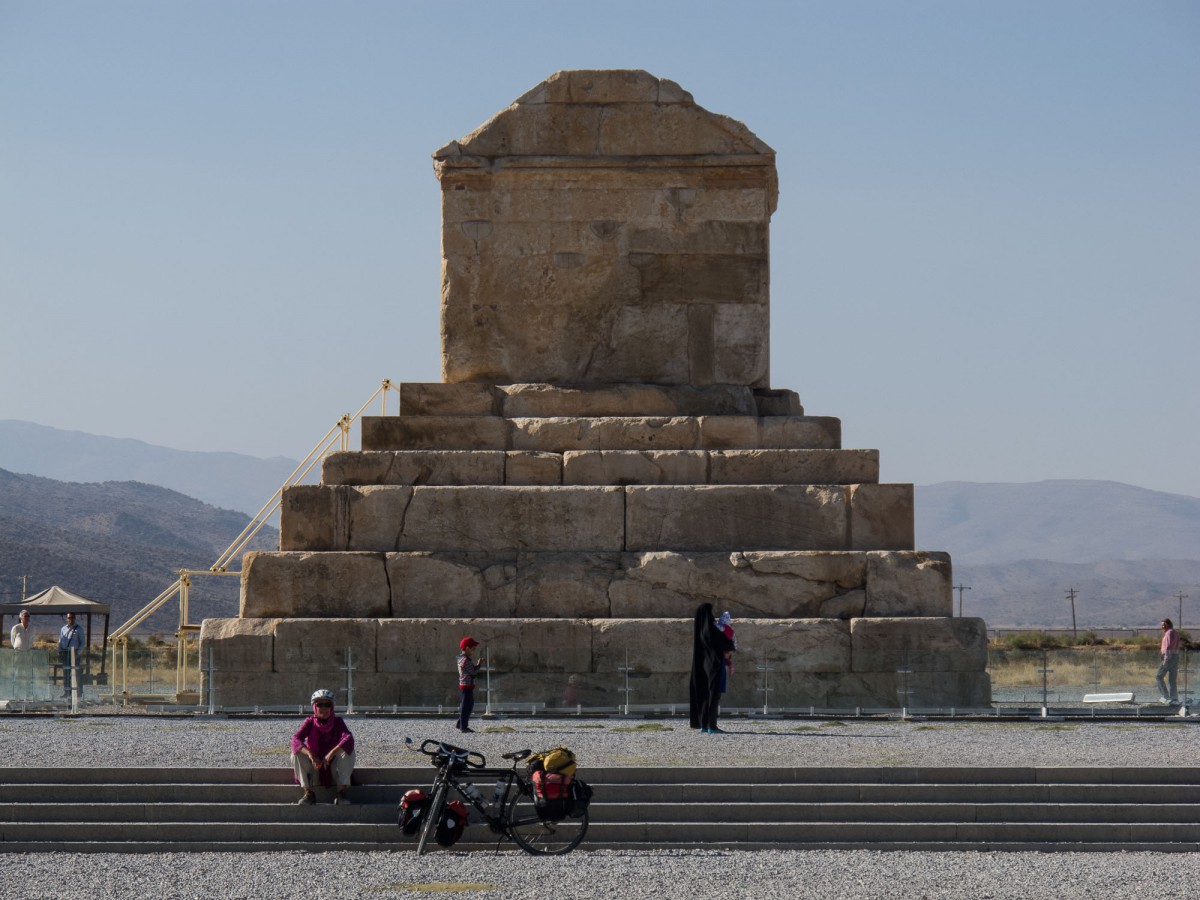 Further south on the highway you’ll spot a ‘No Motorcycles‘  sign. It means a long tunnel is coming up. It’s  not a good idea to cycle through it and luckily there is an excellent old road leading around it.  After joining the highway again few very busy kms follow to Sadatshar. Here you can leave the big highway and follow a nicer alternative route through the valley. This old Shiraz road, gets busier and busier the closer you get to the Persepolis area. 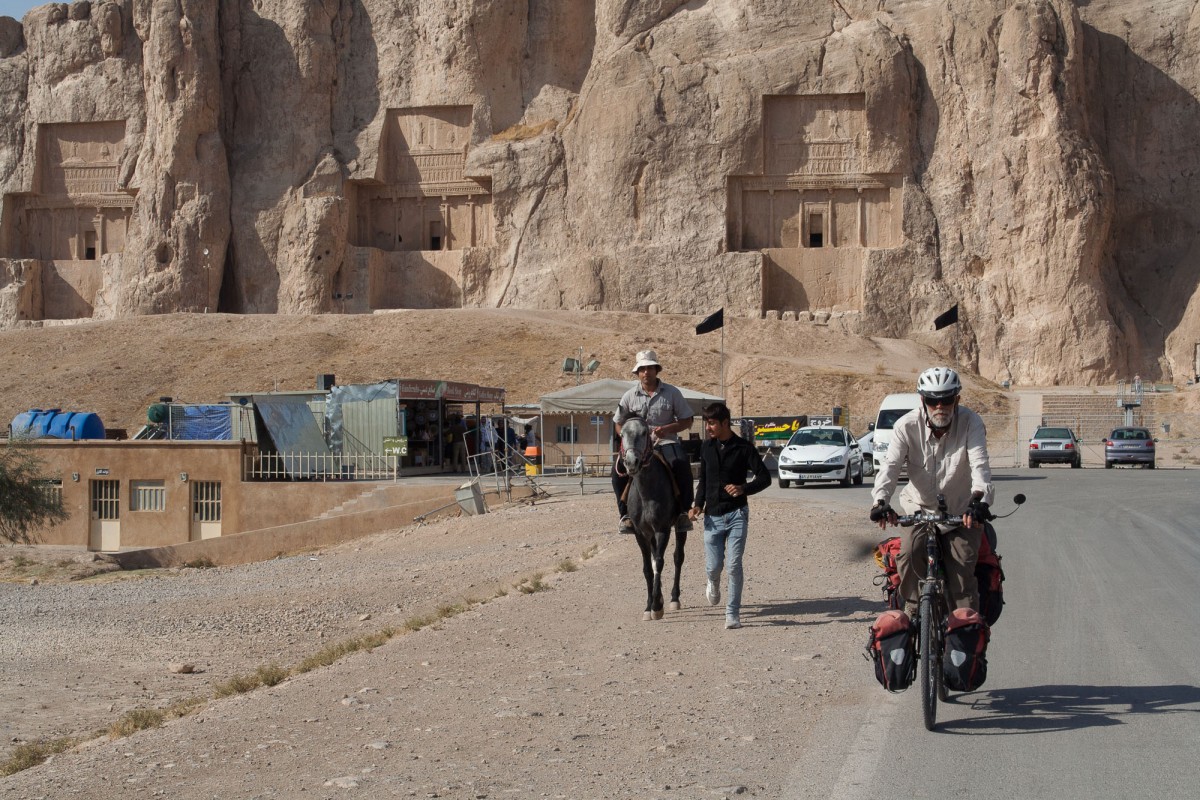 cycling from the tombs to Persepolis

Want to visit the tombs north of Persepolis? These are not signposted for visitors approaching from the north: turn right at the junction just before Persepolis. The smaller tombs are at the junction itself. The Persepolis Tourist Hotel is one of the few places we saw that offered camping but we preferred the good value bungalow style rooms in a green garden. The rooms have a small kitchen, a living room and a separate bedroom. 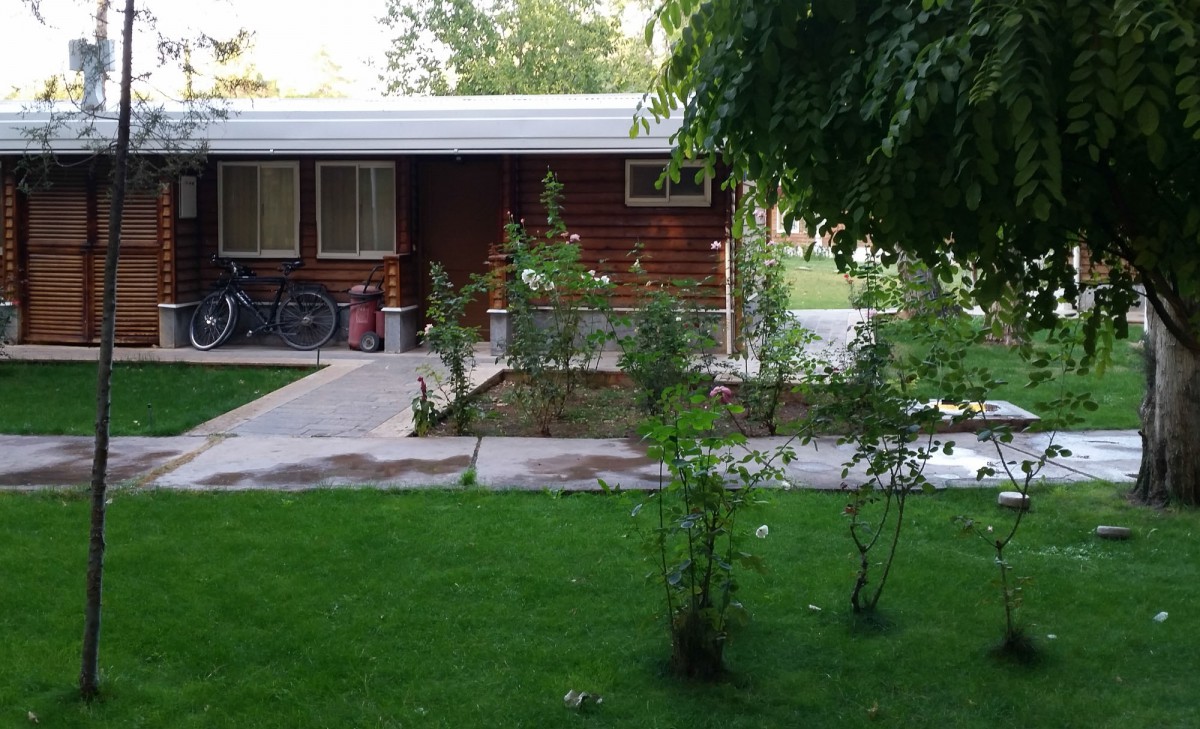 A few miles south of Persepolis is the town of Marvdasht. Cross it and follow highway 65 all the way to Shiraz. The closer you come to Shiraz the busier it gets. There is a good shoulder but the traffic noise and especially the heavy diesel fumes of hundreds of trucks made us feel sick at the end. That’s why we recommend to hitchhike this last stretch. 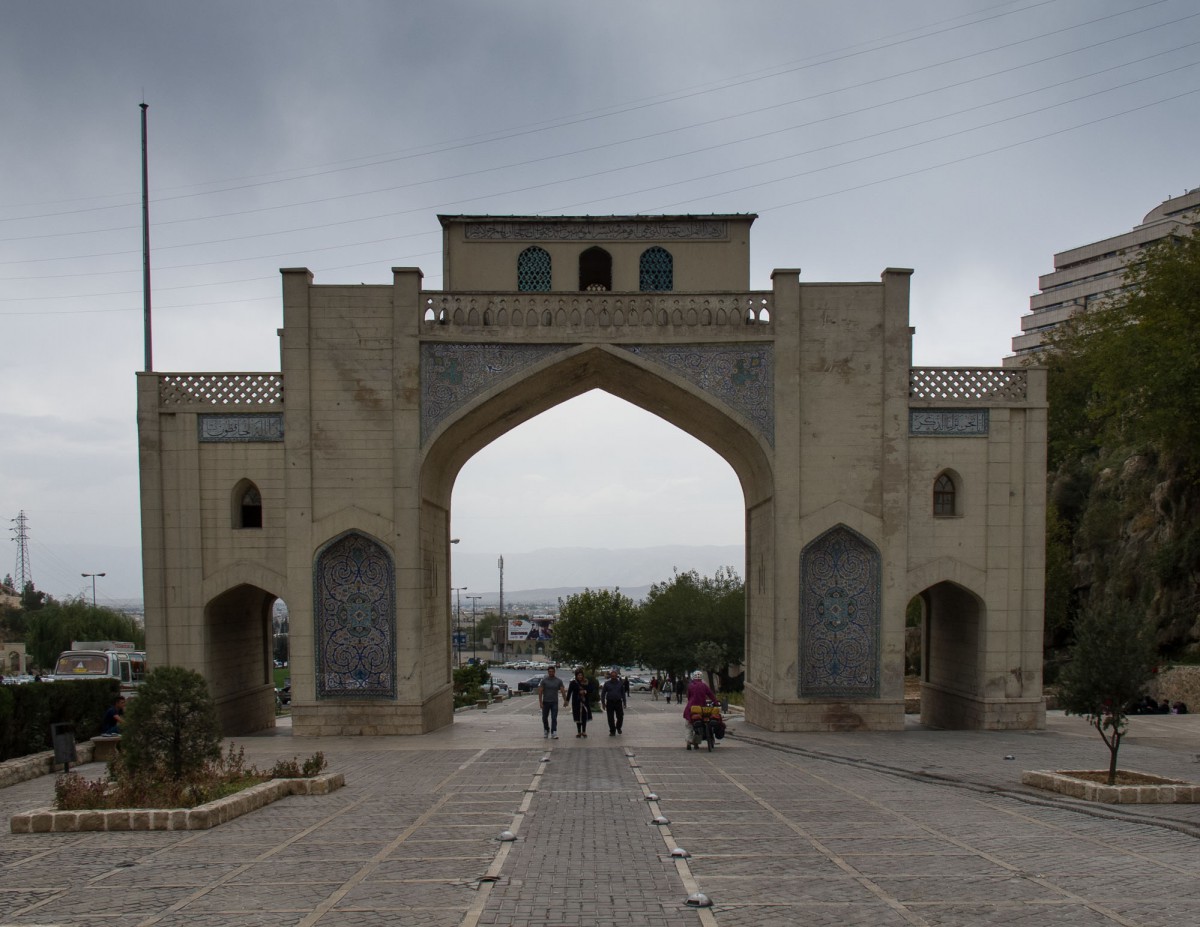 The Quran Gate of Shiraz: we made it!

From Shiraz we flew home via Istanbul to Amsterdam.