All information on these pages is based in our personal experiences while cycling through Zimbabwe in September and October 1999. We cycled from Harare to Mutare and continued to Masvingo and Bulawayo. From Bulawayo we traveled to Hwange NP and Victoria Falls , mainly using public transport.

We used two roadmap’s. The International Travel Map of Zimbabwe; scale 1:1.250.000 (ISBN 0921463790) . This map shows distances between main towns and has an index to all towns on the map. The advantage of this map is that it shows the country in relief. The second map we used was the Road Map of Zimbabwe by the Automobile Association of Zimbabwe. It shows accurate distances between major and minor towns, accommodation information and 12 town centre maps.

Signposting along all the roads we used is excellent; all distances are measured in kilometres. 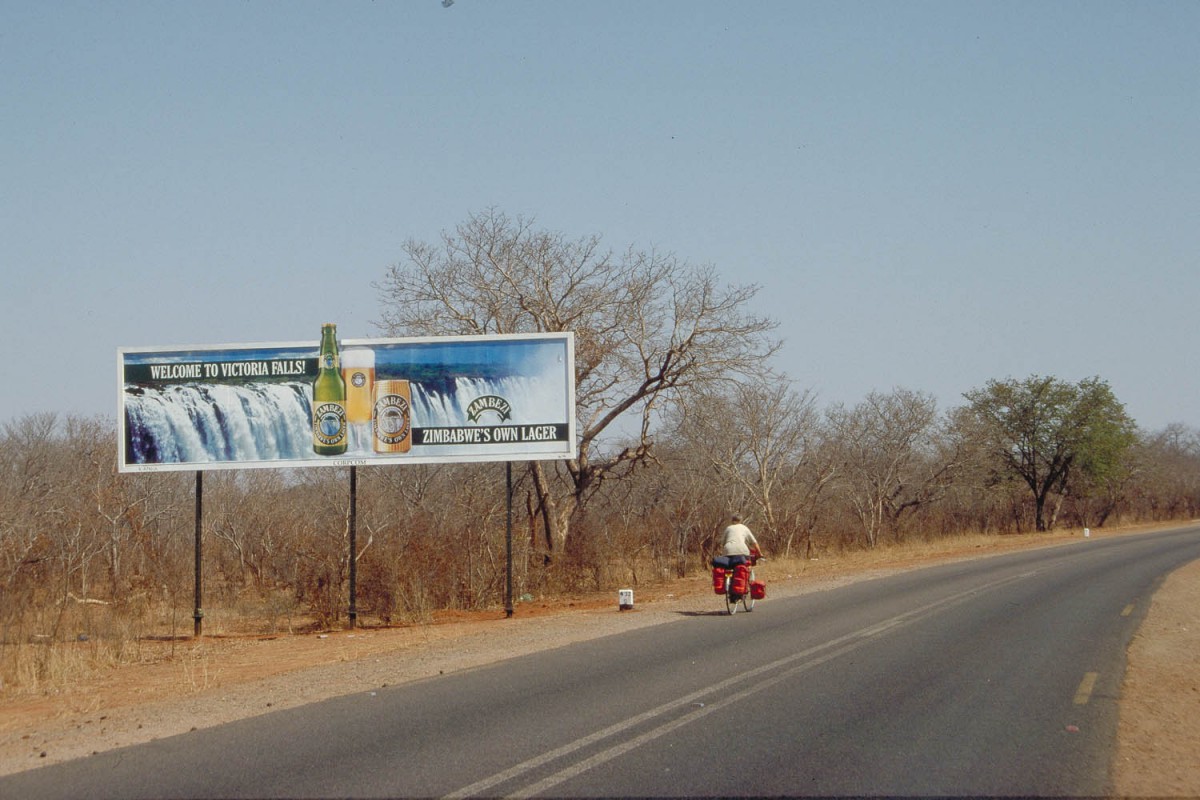 Links on the WWW

All main roads are in a good condition and generally speaking traffic is light. Even better most roads have a shoulder (small strip on both sides separated by a yellow line) that can be used as a bicycle-lane.

Even on a major highway as the Harare – Mutare road traffic is relaxed. Cycling into and through big cities like Harare and Bulawayo is easy.

Also roads are constructed with gentle grades throughout the country. The only exception we found were some parts of the Eastern Highlands where we had to cycle steep but short sections. 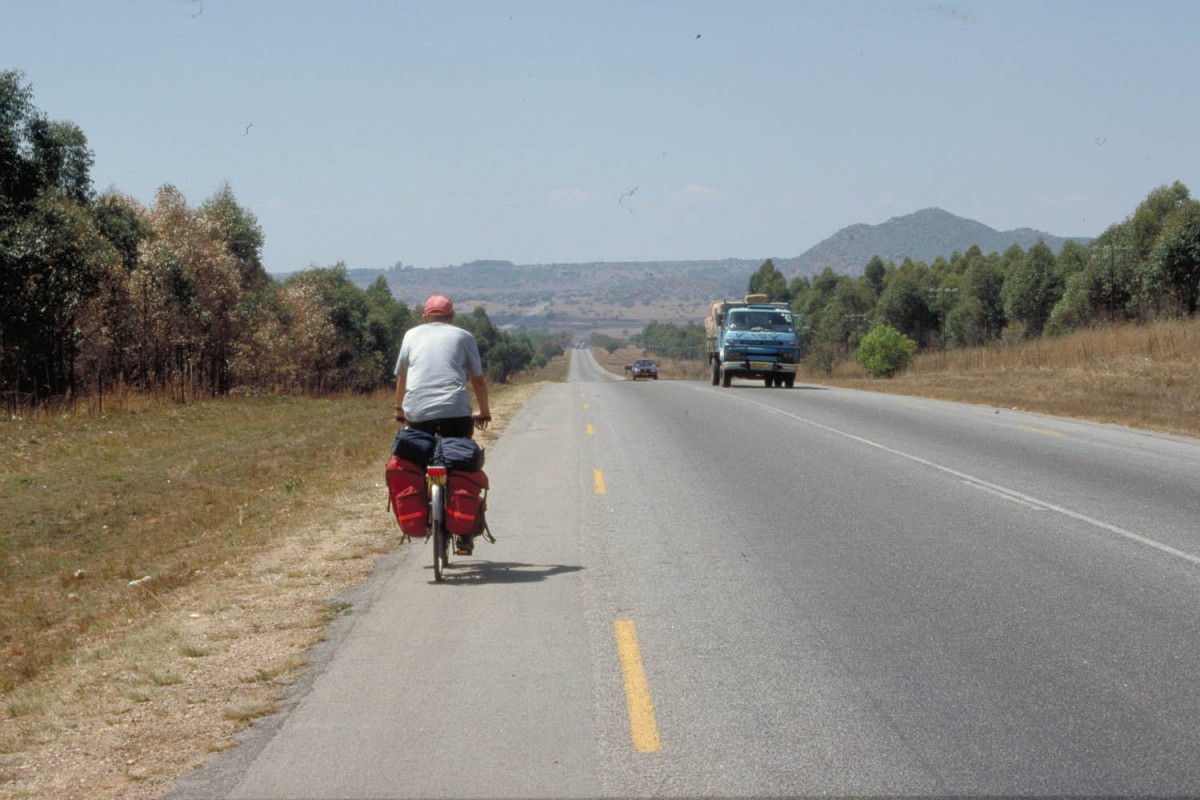 The only time we used unpaved roads was in the Nyanga Rhodes National Park (Eastern Highlands). The quality of these roads varied but they were always cyclable with normal touring bikes. Almost the complete route we followed can be done on a lightweight racing- or touring bike.

Traffic is on the left hand side of the road.

Outside Bulawayo, Harare and maybe Vic Falls virtually nothing is available to repair a broken touring bike. There are some bike shops in but don’t rely on them for serious repairs.

All hotels we stayed in had a decent restaurant where good value meals are available. Eating out is cheap in Zimbabwe; a 3 course dinner will cost approx.. 150 Z$ ( 3-4 US$). In the main towns you will also find eateries that serve pizza’s, Indian food, hamburgers etc.

For the self-catering every major town (on our trip Harare, Marondera, Rusape, Mutare, Masvingo, Zvishavane, Bulawayo and Vic Falls) has a well stocked supermarket. Most shops in the town centres close on Saturday afternoon and Sunday. Small village shops along the road may stay open all week. 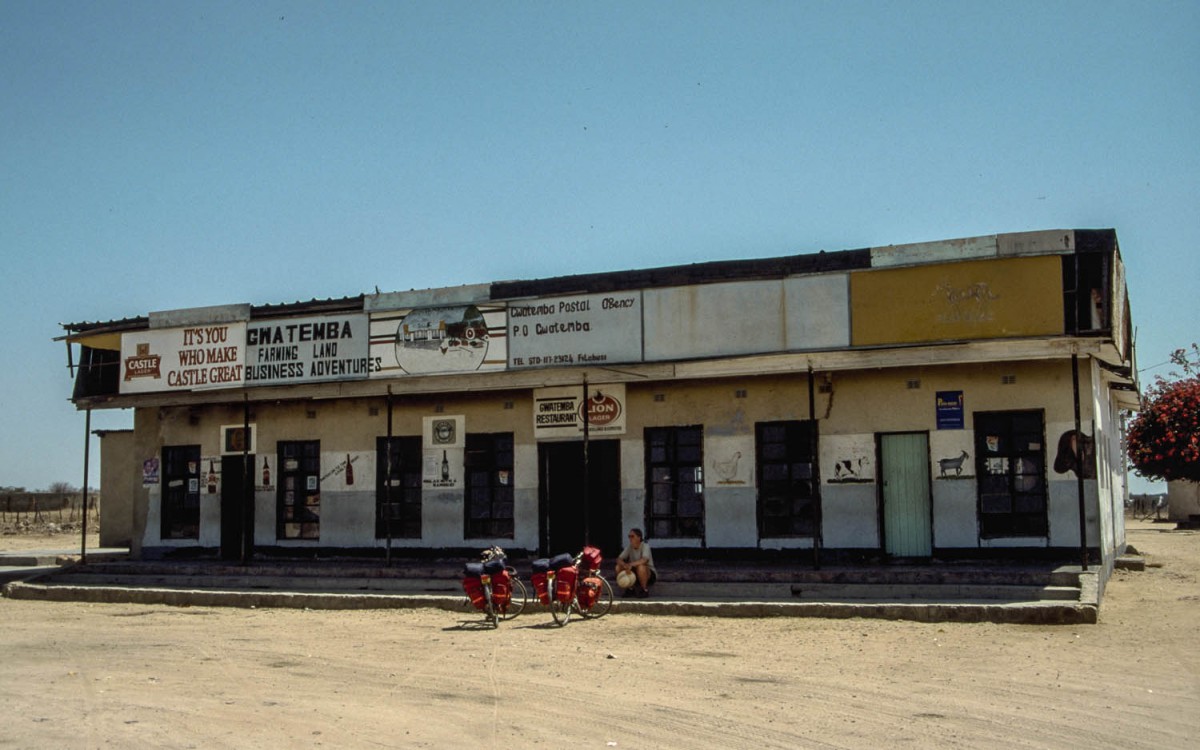 village shop on the road to Bulawayo; cold drinks and basic supplies

It’s safe to drink water from the tap and ice-cold soft drinks ( US$ 0,15) are for sale at almost every village shop along the road. At some places fruit (mostly bananas, oranges, pineapples) is sold by roadside vendors.

We visited Zimbabwe in September and October. Maximum temperatures varied from 15 degrees (Celsius) to 35 degrees.

Minimum temperatures varied between 10 and 15 degrees on the high central plateau and around 25 degrees in the lower parts of the country.

We had two cold and rainy days in the Masvingo area and winds came mostly from the North-East.

Zimbabwe’s wildlife concentrates mainly along it’s borders and inside it’s National Parks. National Parks are off limit to cyclists but there is a chance of seeing kudu’s, zebra’s, impalas and even buffaloes, elephants along the roads just outside the National Parks.

Tip
Just outside Bulawayo, on the road to Matopos NP, is the Tshabalala Game Sanctuary. It’s a small reserve that is open to cyclists. You are free to cycle or walk around and have a good chance of seeing giraffes, warthogs, zebras etc.

All towns have hotels, ranging from basic African style to 5 star luxury. A decent midrange double room starts around 1000 Z$ ( 20-35 US$); including Breakfast.

Every town and all national parks have camping facilities, including flushing toilets and hot showers and bathtubs. A campsite will cost around 100 Z$ (2-3 US$) a night.

As ‘normal’ accommodation is widely available at most towns we could find a decent place to stay or camp almost every day. The two exceptions on the route we followed were at Nyika where the local hotel was extremely basic and unattractive and at Filabusi where there is no accommodation available at all. See the Nyika section and the Filabusi section of our tour report. for alternative accommodation in these towns.

Of course cycling is the best way to get around, but Zimbabwe is a large country so you may want to consider one or more of these alternatives: 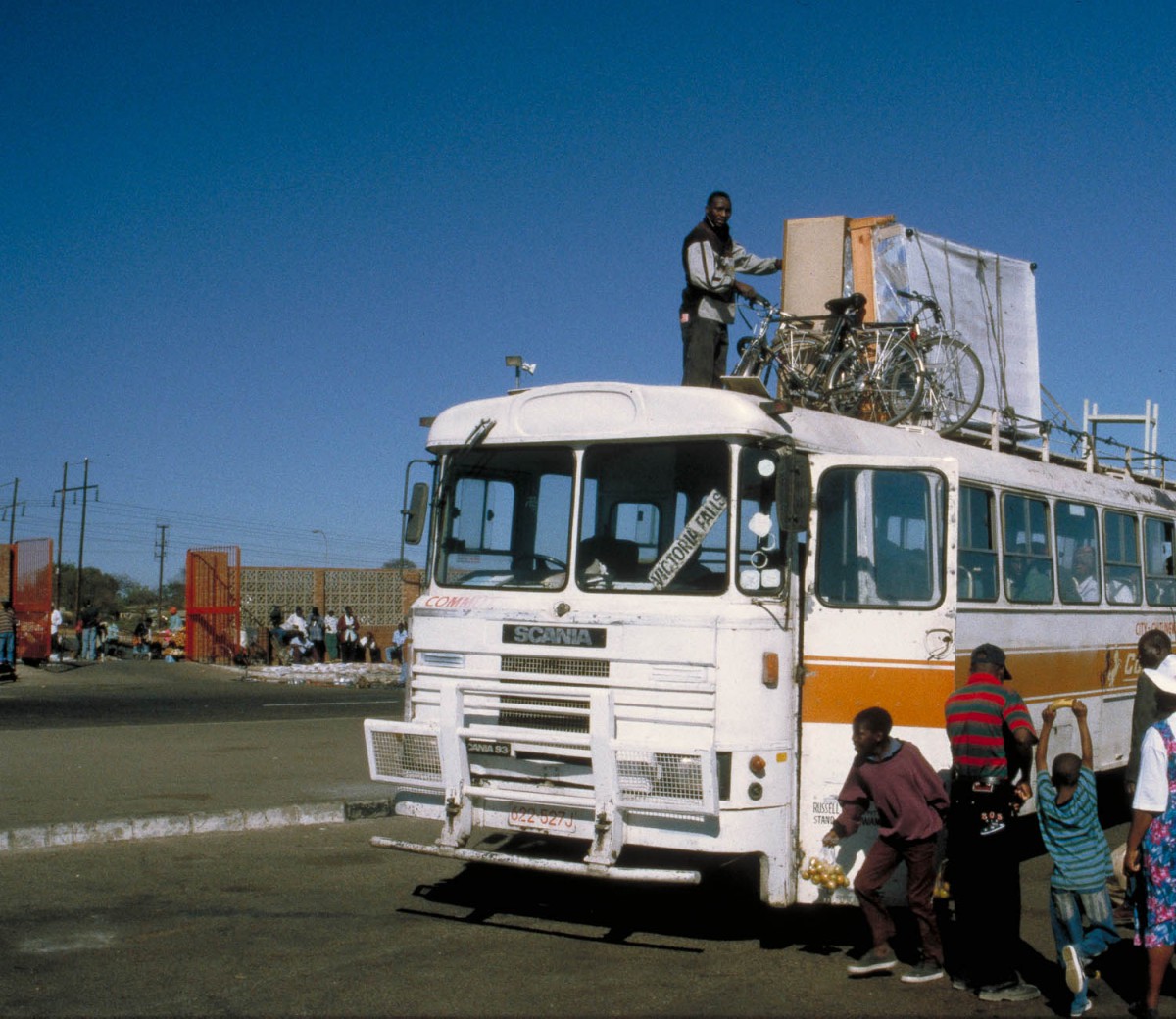 bicycles on top of the bus

For longer distances luxury busses are a good option. The problem is that these buses have limited cargo-space. We discovered that it was difficult to fit in a full-sized touring bike without really taking it apart.

It’s better to take an African bus which have a roof rack for extra luggage. We did this to travel from Bulawayo to Hwange NP and Vic Falls.

It’s possible to send a bicycle by train and to travel on that same train.

We flew from Vic Falls to Harare with Air Zimbabwe. Our bikes were handled with no problems. We only had to deflate our tires completely. This was checked and rechecked by the Air Zimbabwe staff.