Our route on the Western Balkan

In April and May 2019 we toured the Western Balkan (Albania, Northern Macedonia, Kosovo, Montenegro, Bosnia Herzegovina and Croatia) for four weeks. The 1200 km trip started in Tirane (Albania) and ended in Split (Croatia).

The traffic in Tirana may seem to be a bit chaotic but it’s not too bad. We found a almost traffic free route to exit the centre through the city park, which in fact even has a separate bike lane. From there we cycled south parallel to the main highway. This is the old Tirana to Elbasan highway which follows the mountains so some climbing is involved. Elbasan is a nice town with all services.

From Elbasan we decided to take to probably more scenic and quiet route via Gramsh and Maliq to Lake Ohrid. The road is indeed scenic and very quiet but included an unexpected very steep climb. The old SH71 (nicely following the river) is blocked due to construction works for a new dam. A new paved road is constructed following an old mountain road high above the river. Some locals on mtb bikes told us that it would be able to continue along the river but it would involve ‘dragging the bike for some distance through a river’.

At Maliq  the SH3 highway north to Ohrid is not too busy. There is plenty of accommodation around Pogradec as well as some some campgrounds along the south side of the lake. Crossing the border to Northern Macedonia was hassle free. As were all the eight border crossings on this trip.

The road to Ohrid climbs steeply from the border area and was rather busy on the day we traveled it. South of Ohrid it’s possible to leave this road behind and cycle north to the city center on a nice boulevard along the lake on a separate bike lane. 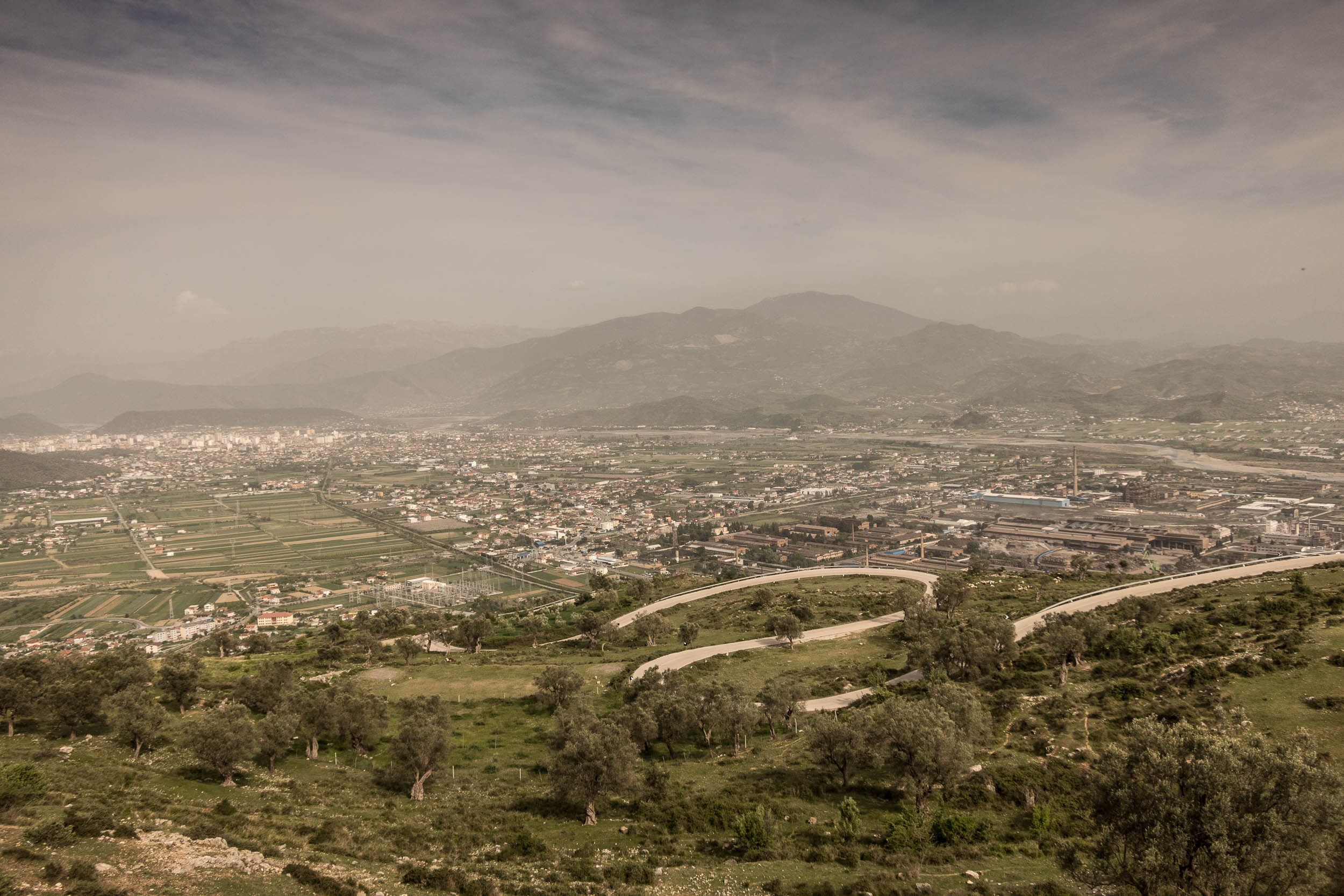 Elbasan is in the distance 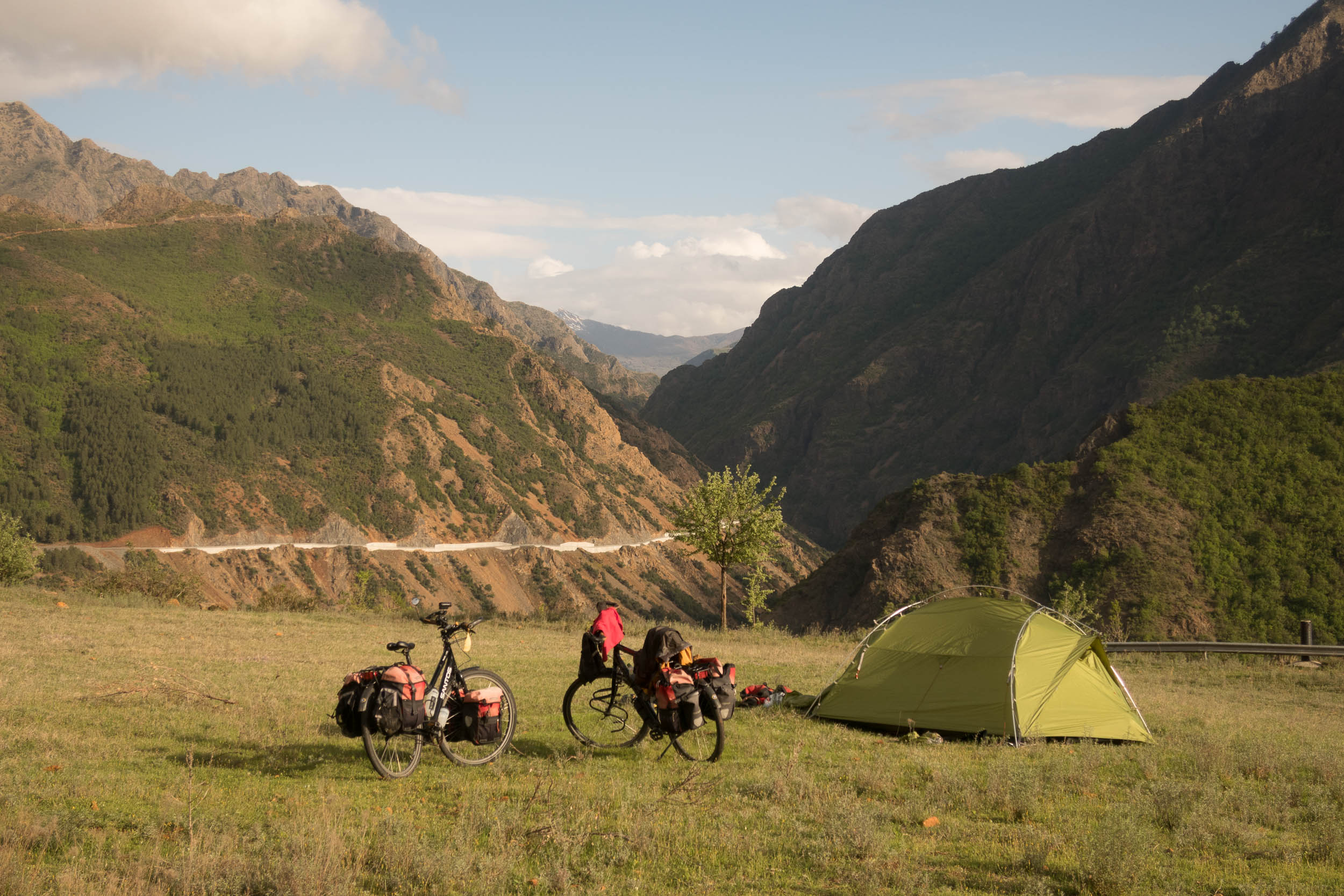 Camping along the Gramsh road 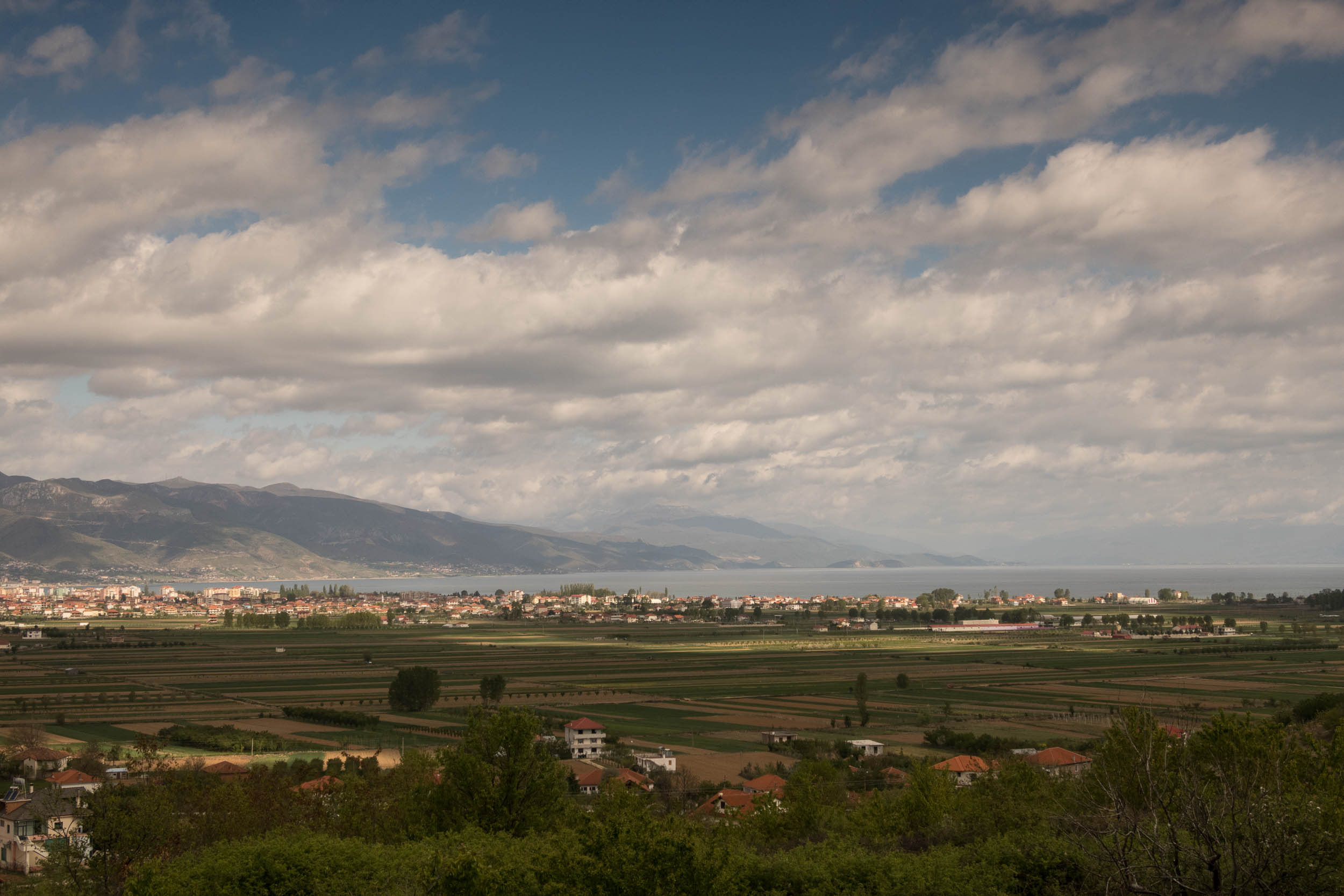 From touristy Ohrid there are some quiet secondary roads following the lake to Struga. The R1201 north may seem a bit busy but most of the traffic dies out after some time. Further north the road slowly climbs following a couple of lakes and a river to Debar. From Debar it’s not far to the border.

At the other side of the border the next town is Peshkopi with hotels, a hostel and a campsite. Out of Peshkopi going north there are two options. Either follow the mountain route (paved, more traffic) or descend to the Black Drin river. We choose this last route. After a very nice descend on new asphalt the road suddenly narrowed and became unpaved. It’s up and down on a gravel ‘road’ following the river with great views of the valley and (almost) no traffic. The gravel however is sometimes rough and the second part of the road the grades are steep.

Back on the ‘main’ road the route descends to unexciting Kukesh where we followed the Albanian motorway to the border. This is a two lane per direction highway but without a shoulder. Traffic was low and drivers considerate. After the border to Kosovo the motorway becomes a real highway (two lanes with a wide shoulder) so we forgot about any alternatives and using the shoulder we rolled easily all the way to beautiful Prizren. 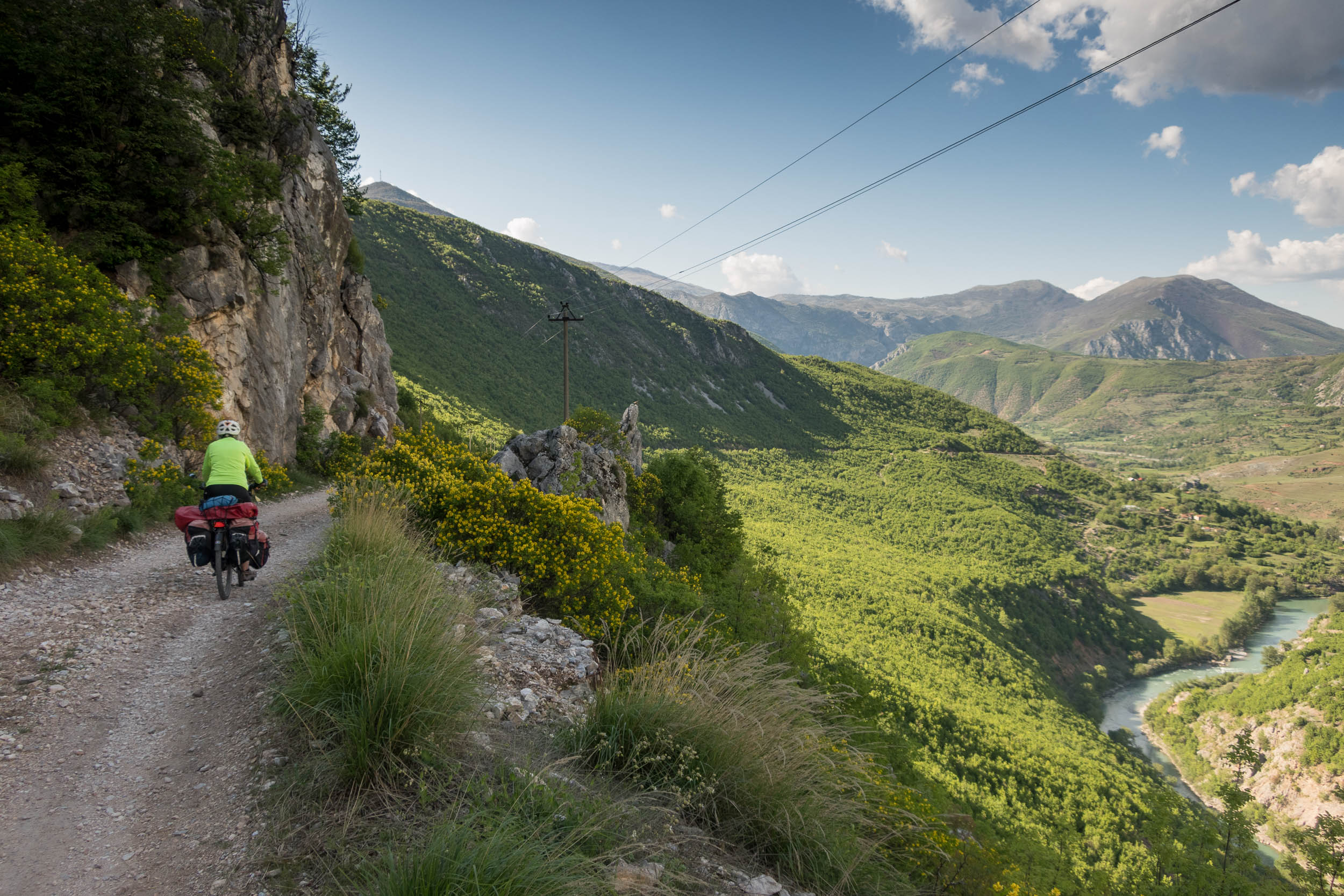 The valley of the Black Drin 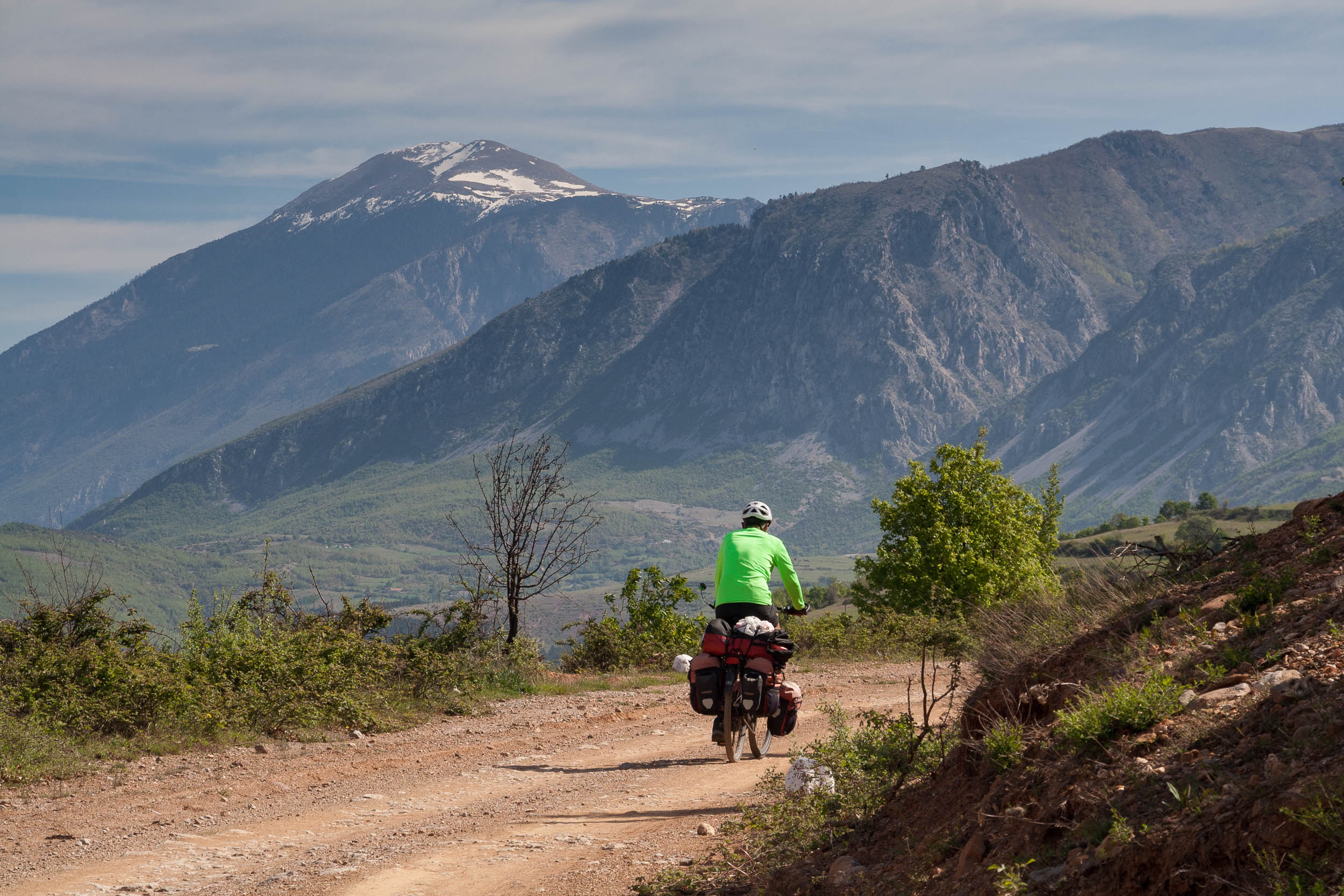 Snow capped mountains in the valley of the Black Drin 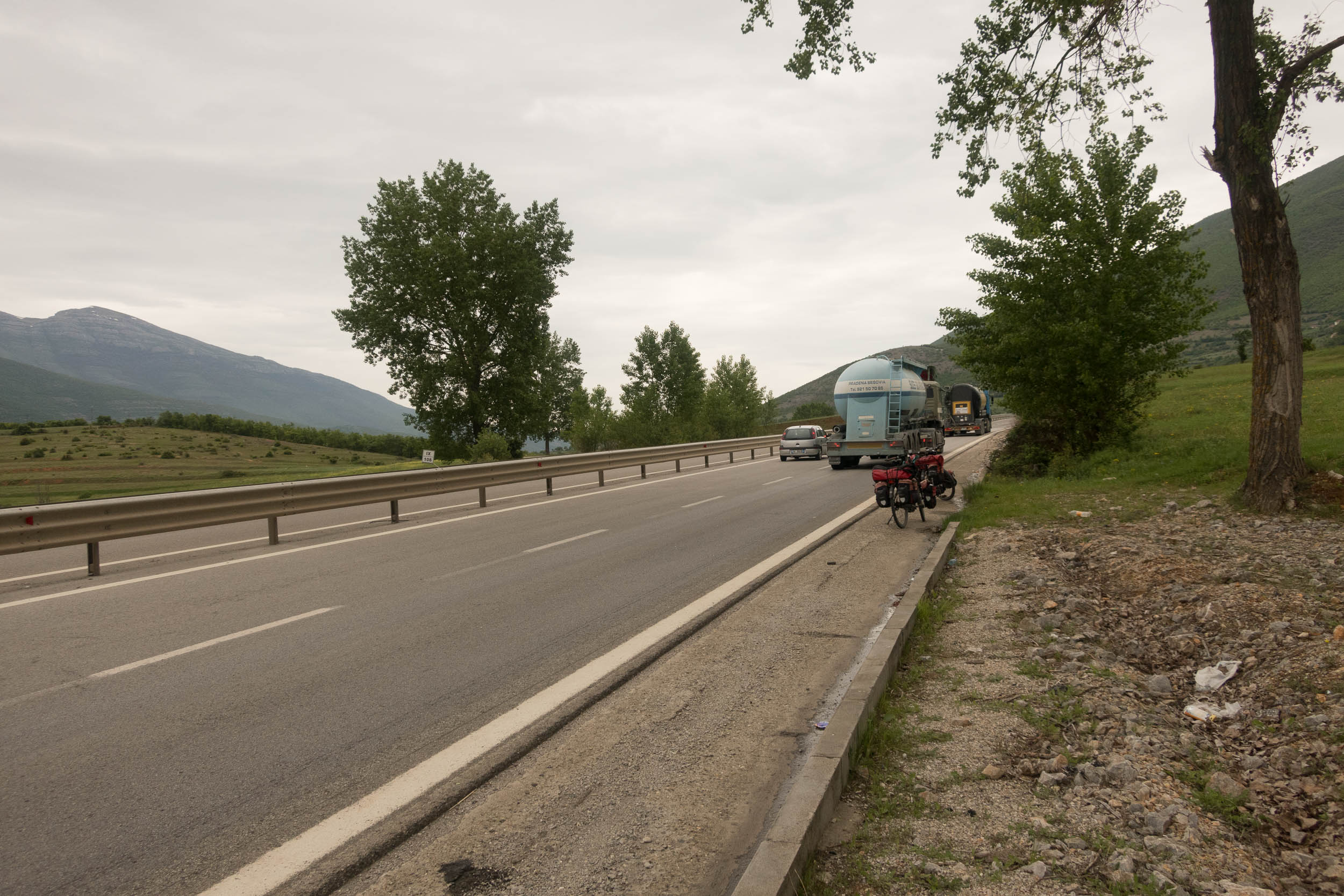 Kukesh to the border with Kosovo: cycling the Albanian motorway 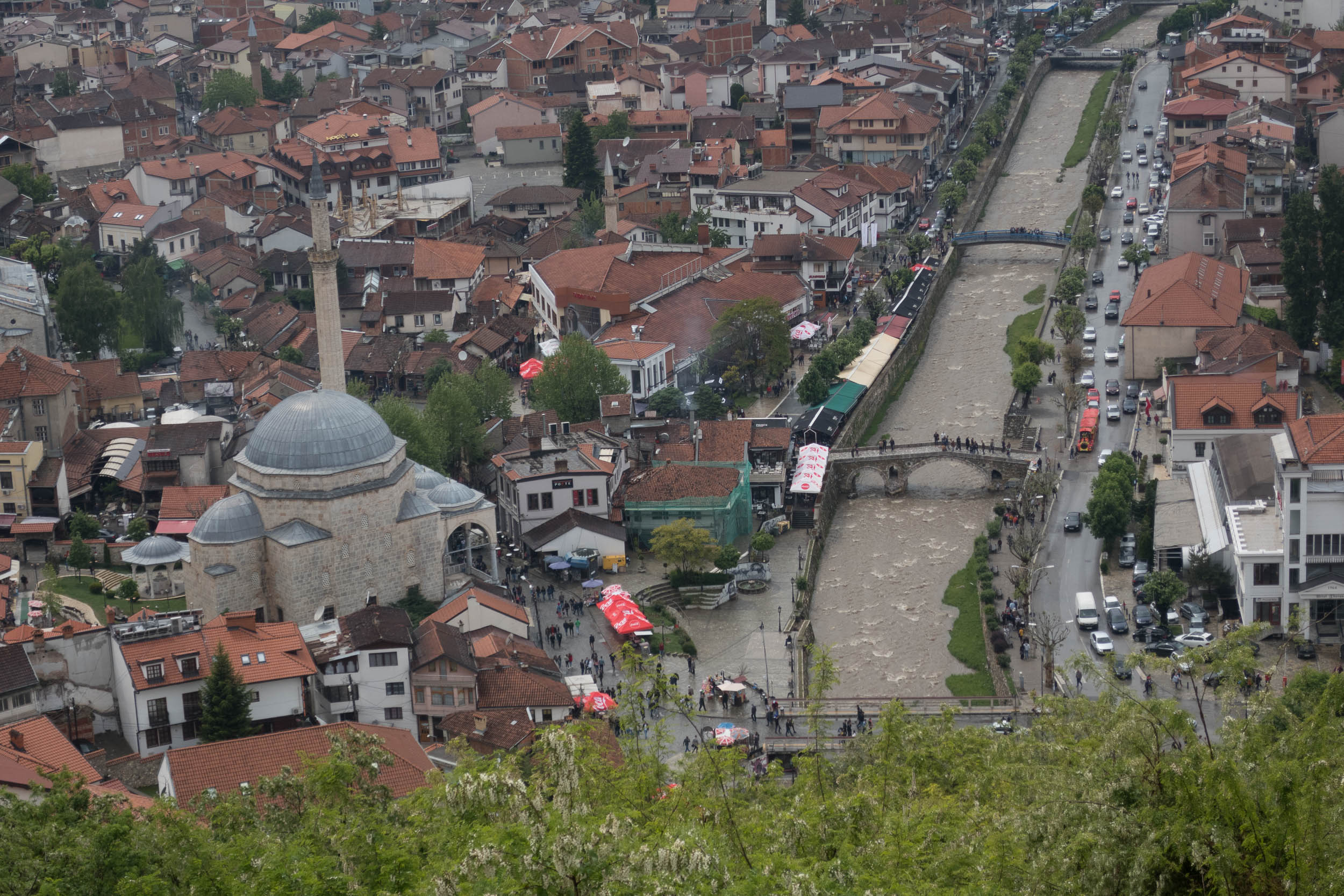 View of downtown Prizren from the old fort 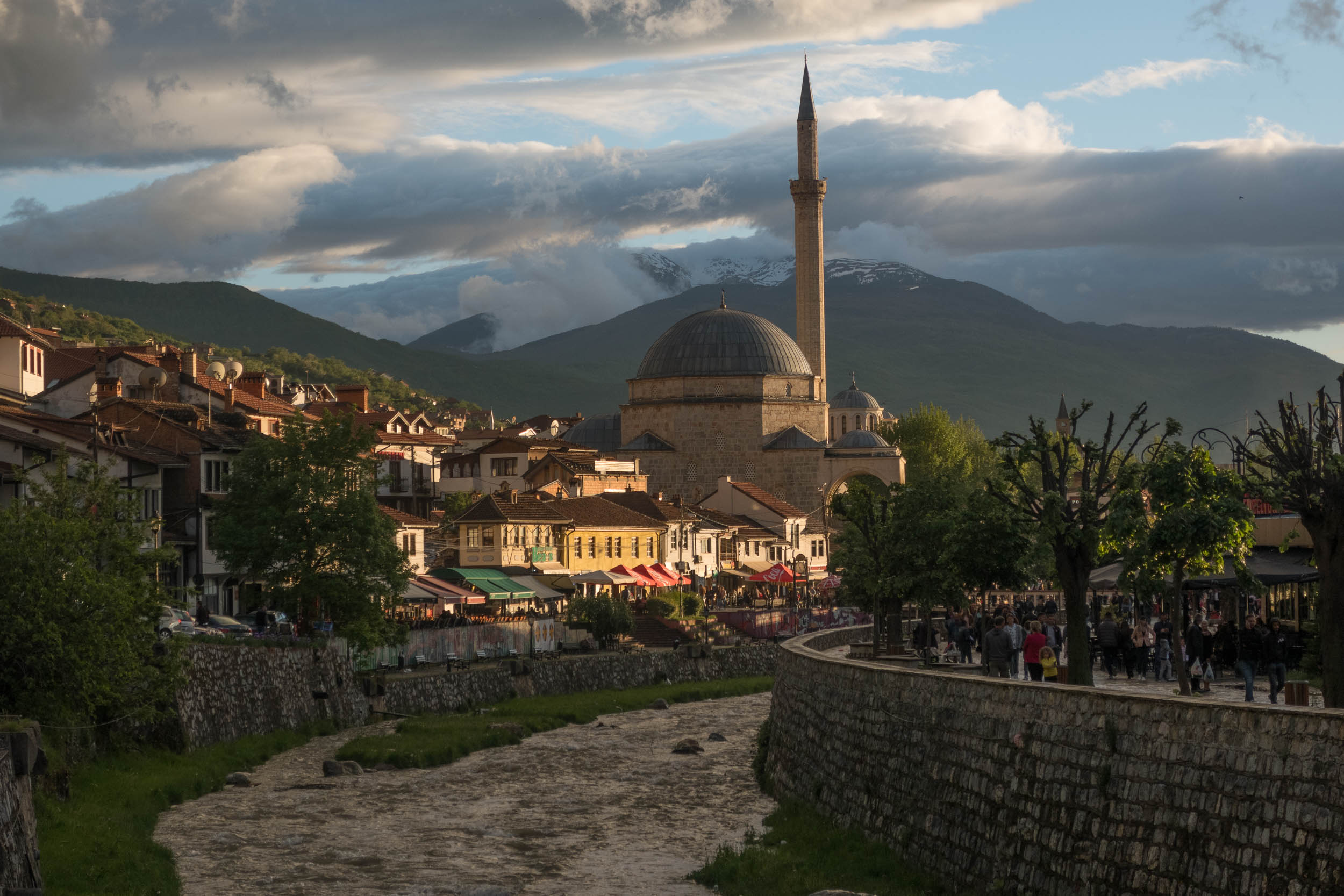 Sunset after a rainy day in Prizren

From Prizren we cycled to Gjakovë, another town with a nice historical center. From Gjakovë we cycled along quiet backroads to the border. There are some impressive monuments from the Yugoslavian Wars in the ’90s along this route. Kosovo was a war zone but now everything is quiet. As a reminder of this period you’ll also see many US and EU flags waving in towns. Crossing the border was again easy and the road into Albania was nice with good views of the snow capped mountains of the Valbona National Park, a popular destination for hikers.

We continued straight to the Fierzë – Komani ferry landing where we got just in time to get on the 13:00 ferry. It’s a nice almost three hour boat trip and on the larger ferry there probably always is space for bicycles. In the early morning a smaller boat leaves which, we think, has limited space for bicycles.

After the Komani ferry landing  follows a well lit and paved tunnel. Nearby is the Natura Campsite and Restaurant. Popular with people with cars (and cyclists) who want to catch to early ferry to Fierzë. We camped here one night before continuing to Shkoder.

The road to Shkoder starts rough and bumpy but gradually improves. It follows a large lake and it has many up’s and down’s. The last miles to Shkoder are almost flat and the landscape strongly reminded us of our home country The Netherlands.

Kosovo: monument and cemetery for the victims of the Meja massacre 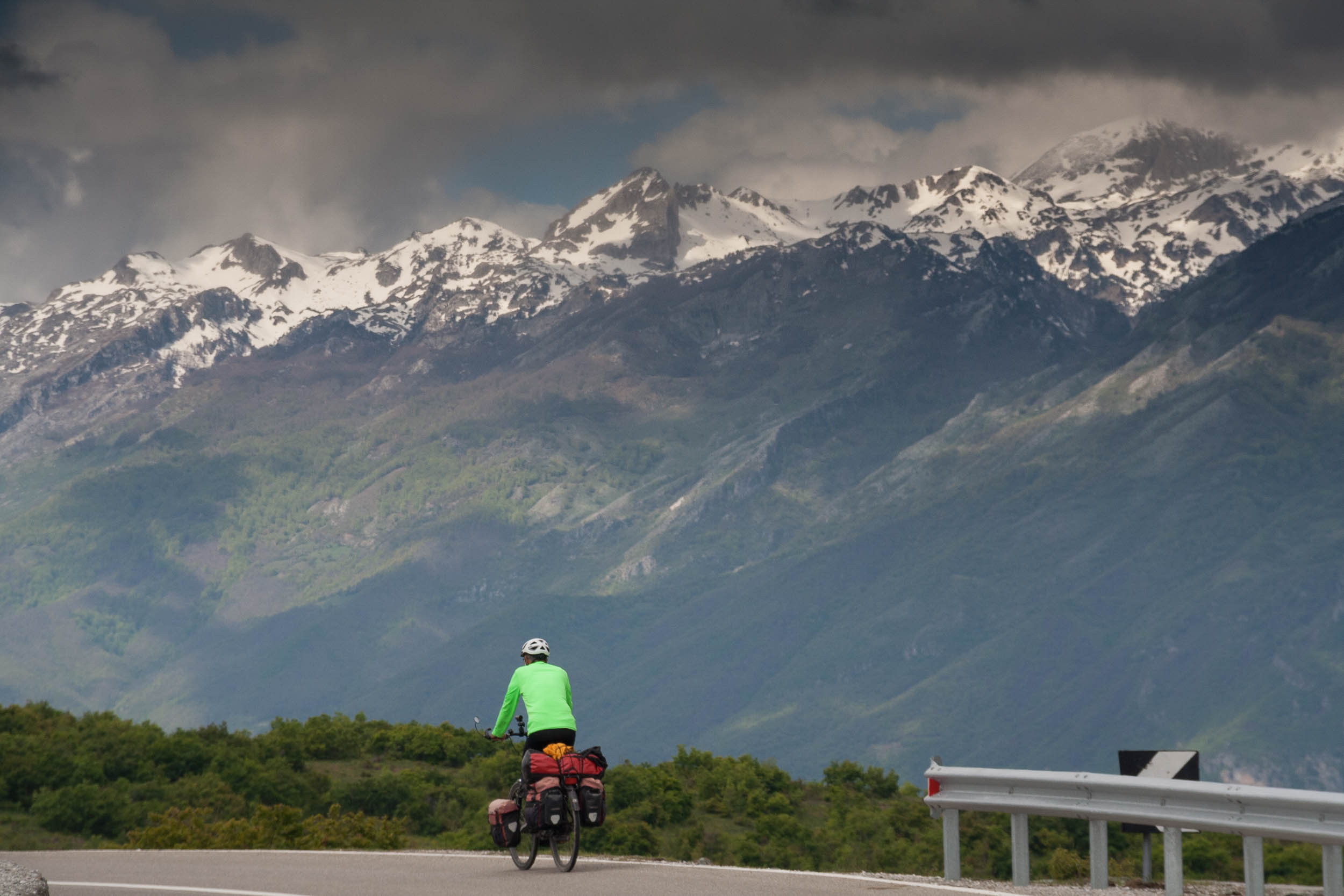 Views on the mountains of the Valbona NP 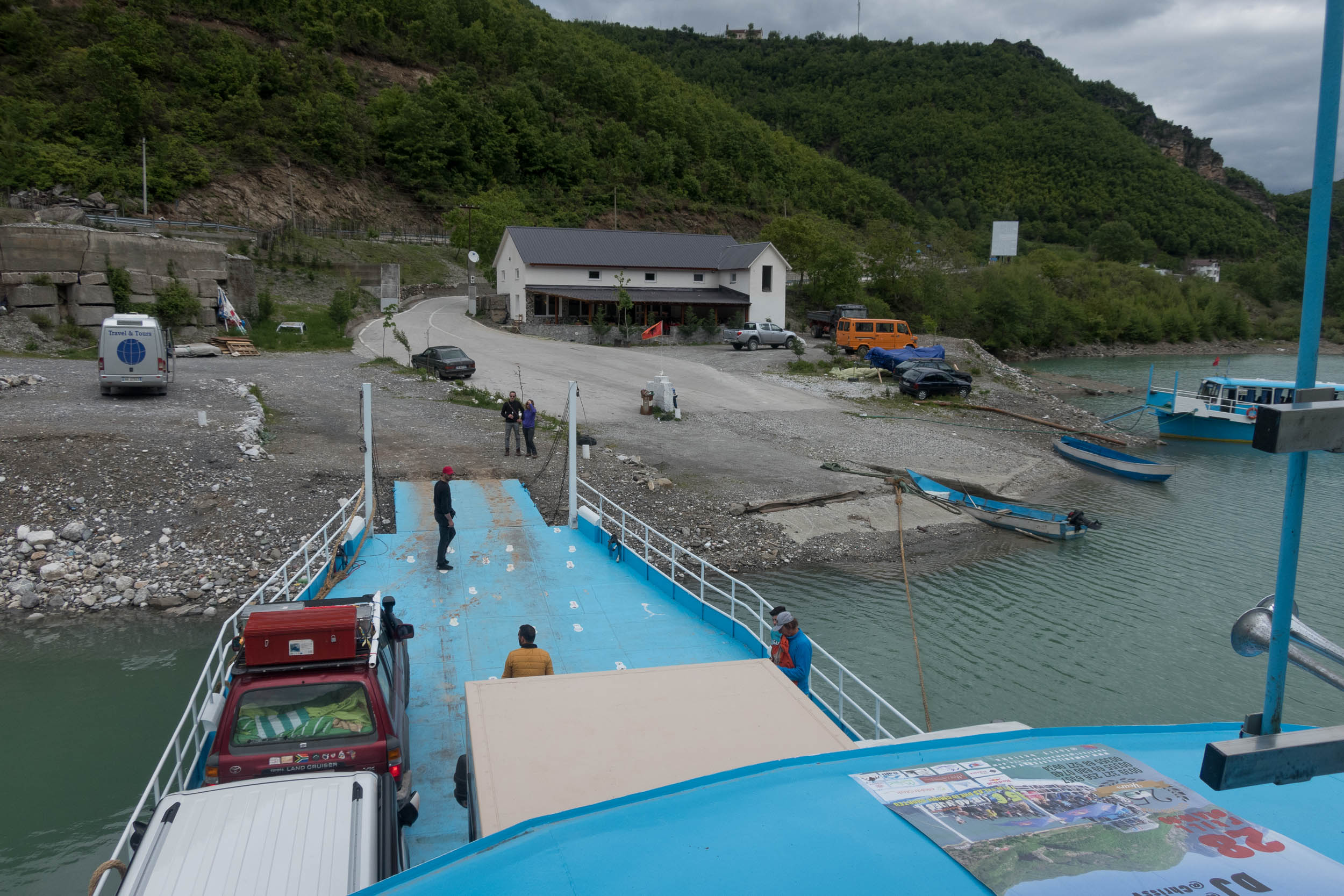 Ferry landing at Fierzë which is actually not in Fierzë itself. Bicycle fare is 10 euro, 1 person is 6 euro 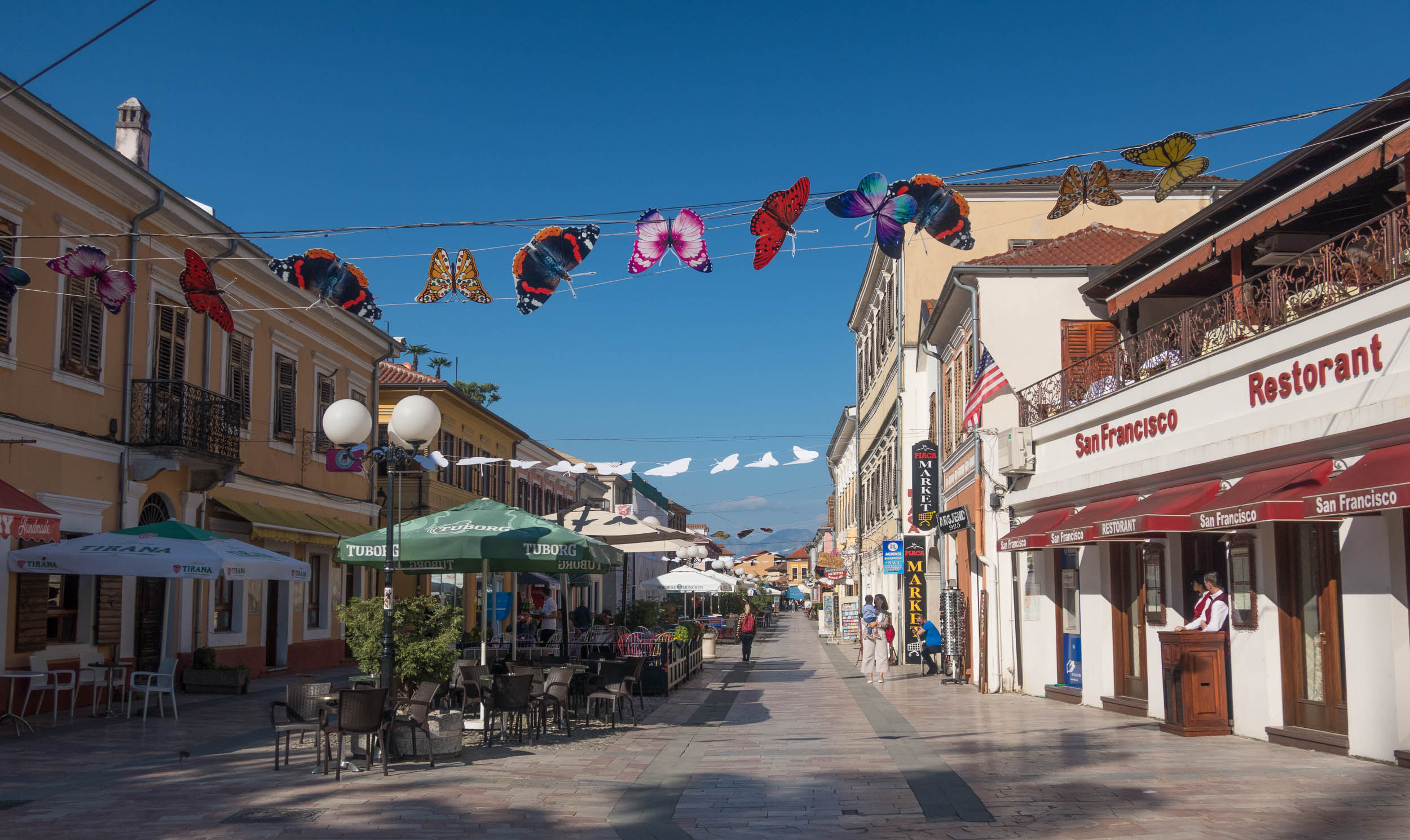 City center of Shkoder: the first town we visited with a Mediterranean atmosphere

The route to Dubrovnik (Croatia) lead us to the border with Montenegro. Along the Shkoder Lake is a lovely little road with wonderful views of the lake and almost no traffic. You’ll probably meet some other cyclists here as this is the preferred (and best) route from north to south and v.v. There is a small campsite at Murici and plenty of accommodation in Virpazar. Another quiet road leads from Virpazar to Centinje and on to Kotor. On the road to Kotor we passed the highest point of our trip: 1450 m above sea level. At bit later you’ll get the stunning views of the bay of Kotor and the town itself more than 1000 m below. The famous road with its 25 hairpins can be rather congested. Especially if there are tourist buses going up or down. Kotor is a small lovely old town.

From Kotor we followed the road on the peninsula to the Lepetani – Kamenari ferry. This is a large car ferry that mainly serves all the traffic for the E65 at the other side. Several ferries run constantly all day. We quickly got off the E65 and followed lake roads and promenades all the way to Herceg Novi. Very relaxed cycling, but avoiding all the pedestrians and the speed bumps may slow you down ;-).

From Herceg Novi we continued to the border on the E65 and kept cycling on it until we got to the village of Gruda. Here a nice side road leads you to Cavtat. The center of Cavtat is small, almost car free and consist of hotels, apartments and restaurants. More important: there are regular small ferries to Dubrovnik (12 km away) all  day and you can take your bike on board (free). By taking the boat we avoided the extremely busy coastal highway.

Bicycles are banned from Dubrovnik but getting off the boat at the small harbor leaves you no other option than to push your bike through the dense crowds to the opposite gate of the town. We found Dubrovnik extremely impressive but almost impossible to enjoy because of the huge crowds. After a short peek we started cycling to the border of Bosnia Herzegovina. To avoid the main highway again we made a small detour via the Dubrovnik harbor.  The border is only 12 km away. 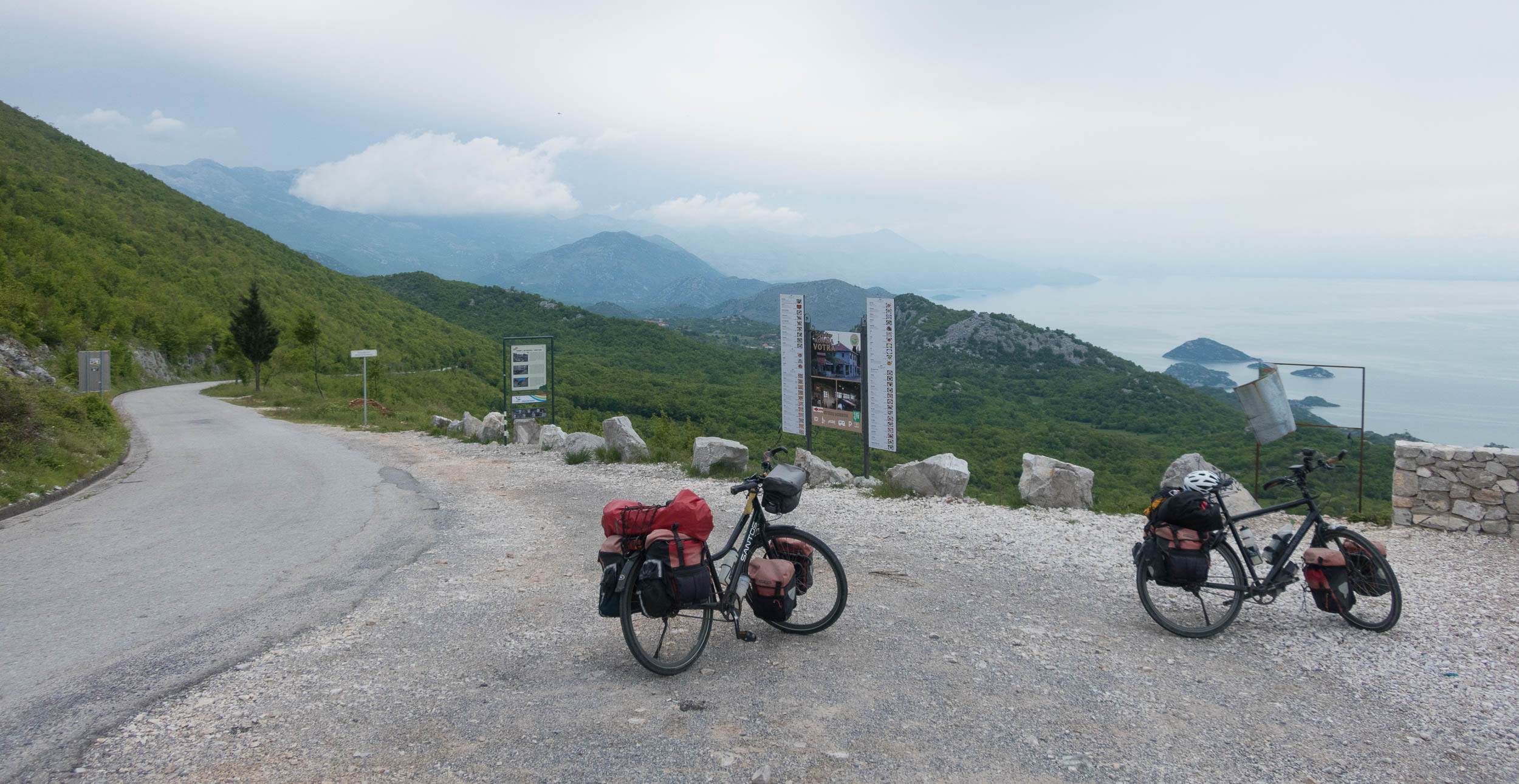 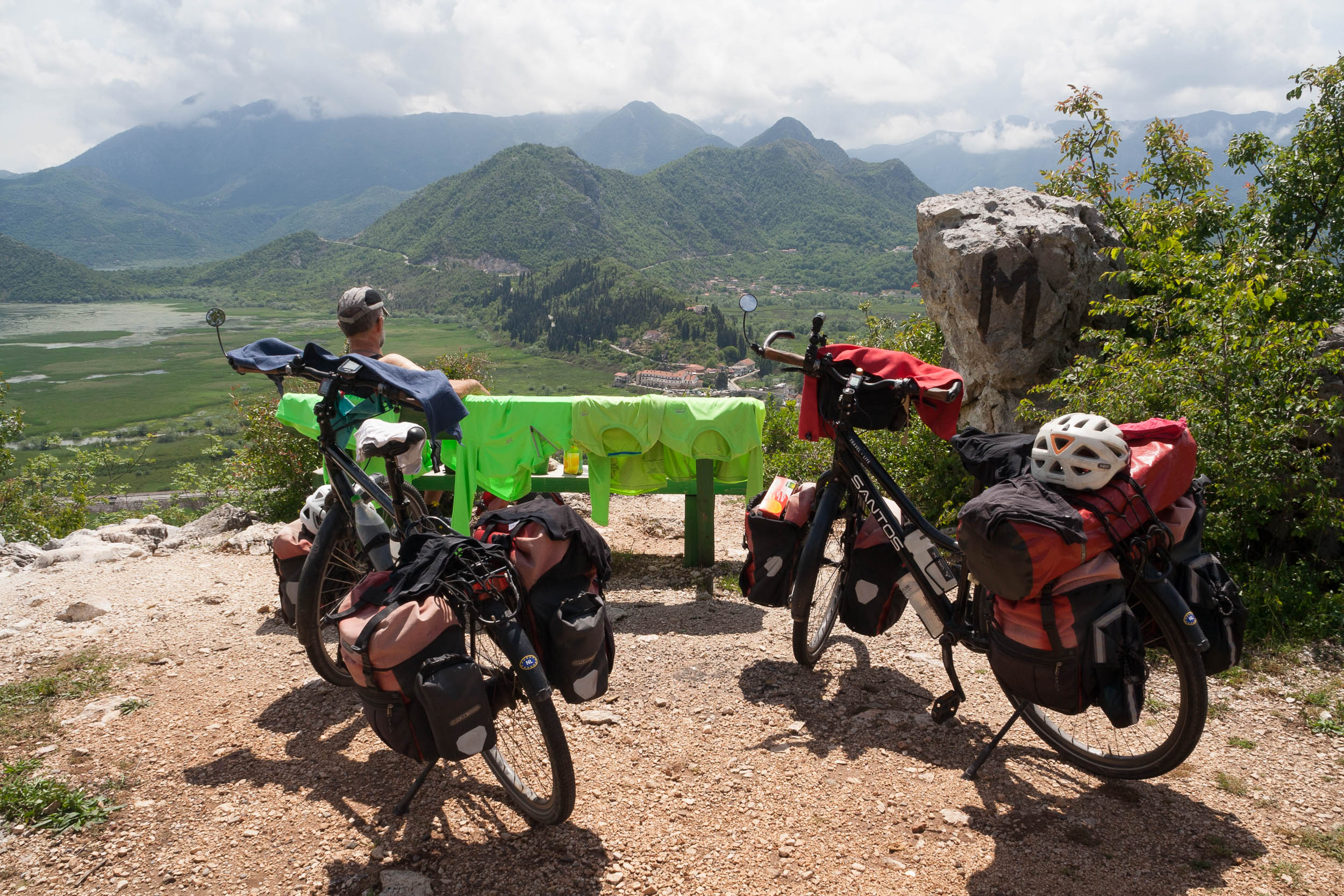 Drying clothes after another heavy rain shower. View of Virpazar 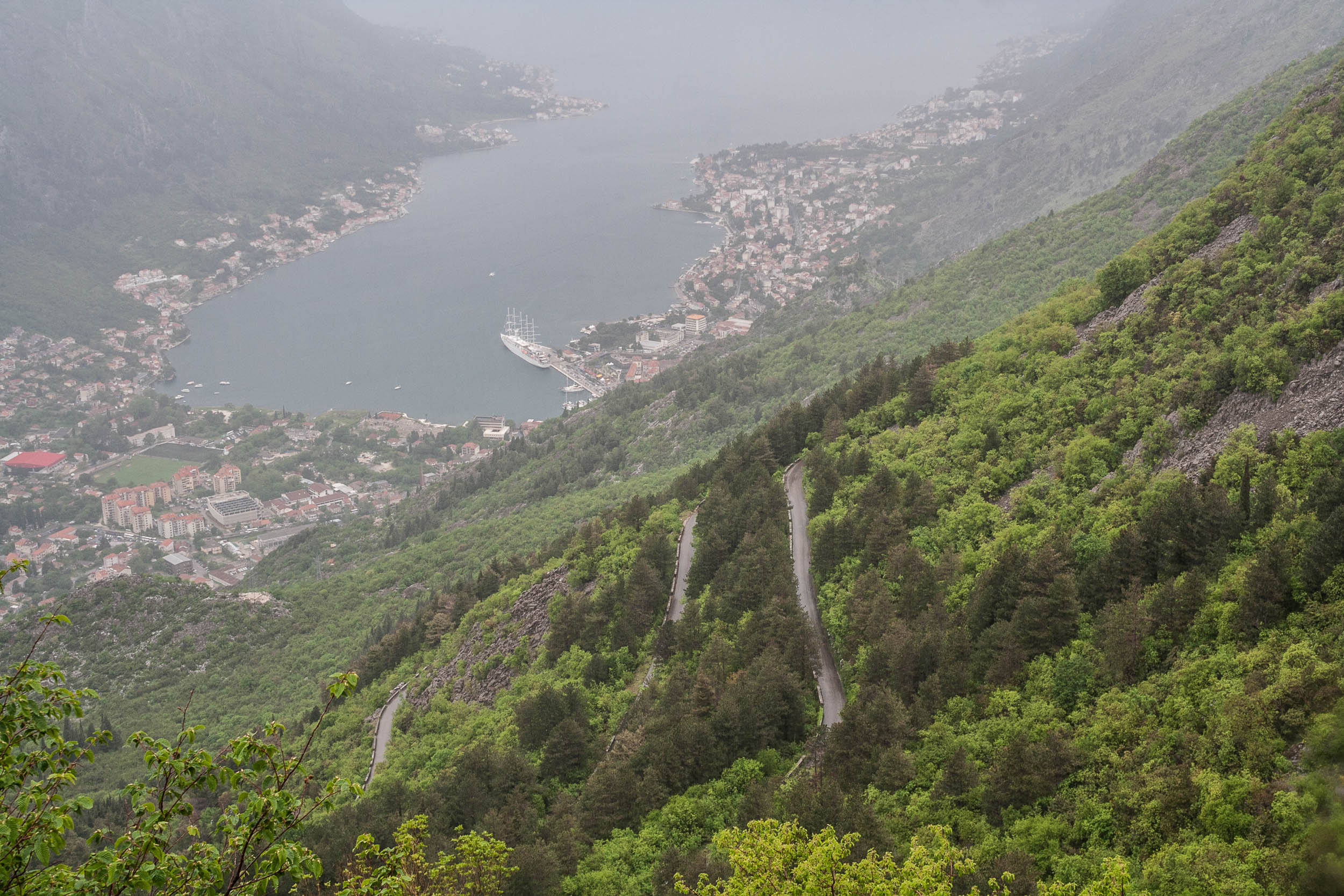 View of Kotor and some of the 25 hairpins… 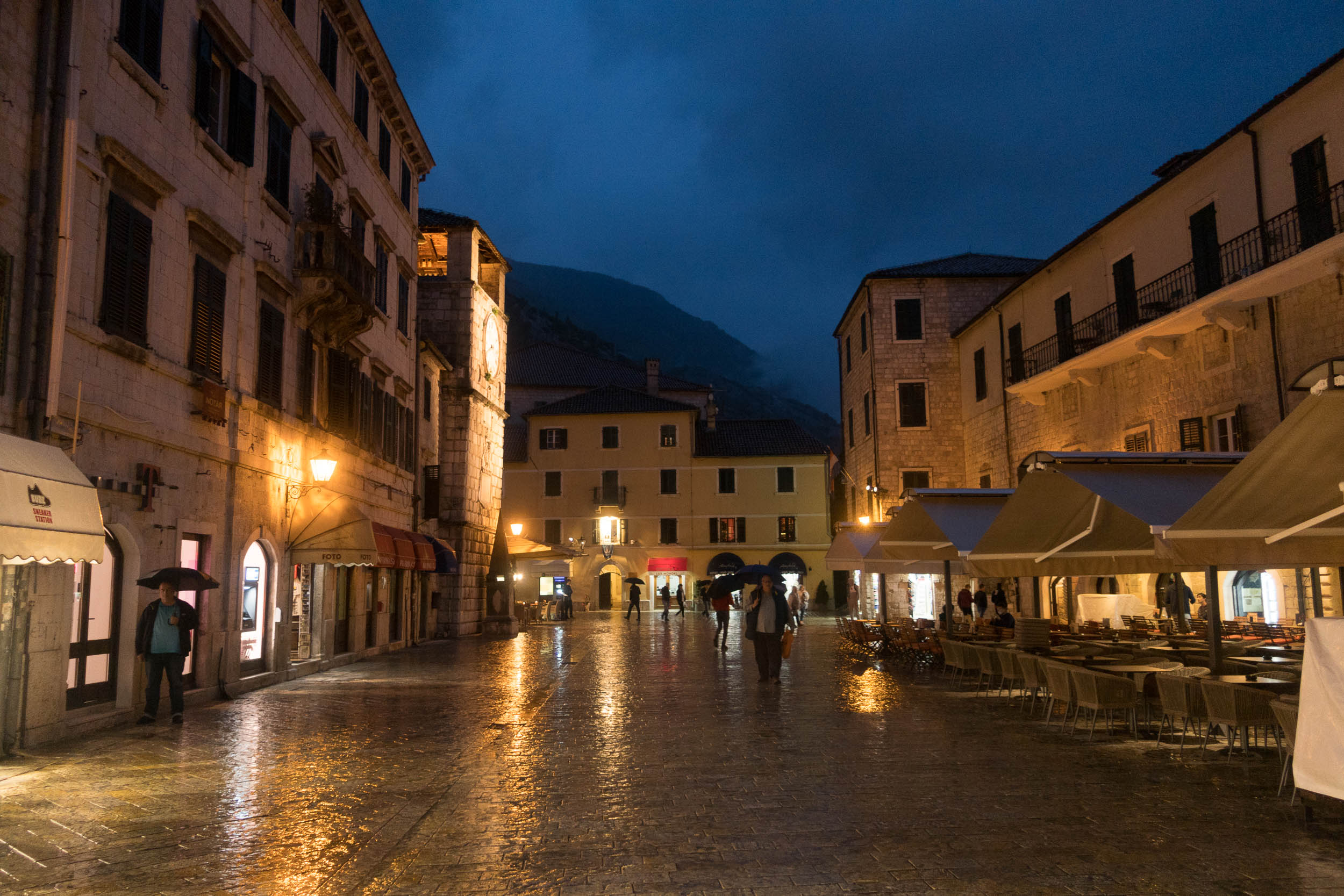 At night, when all the day trippers are gone, Kotor really showed some atmosphere 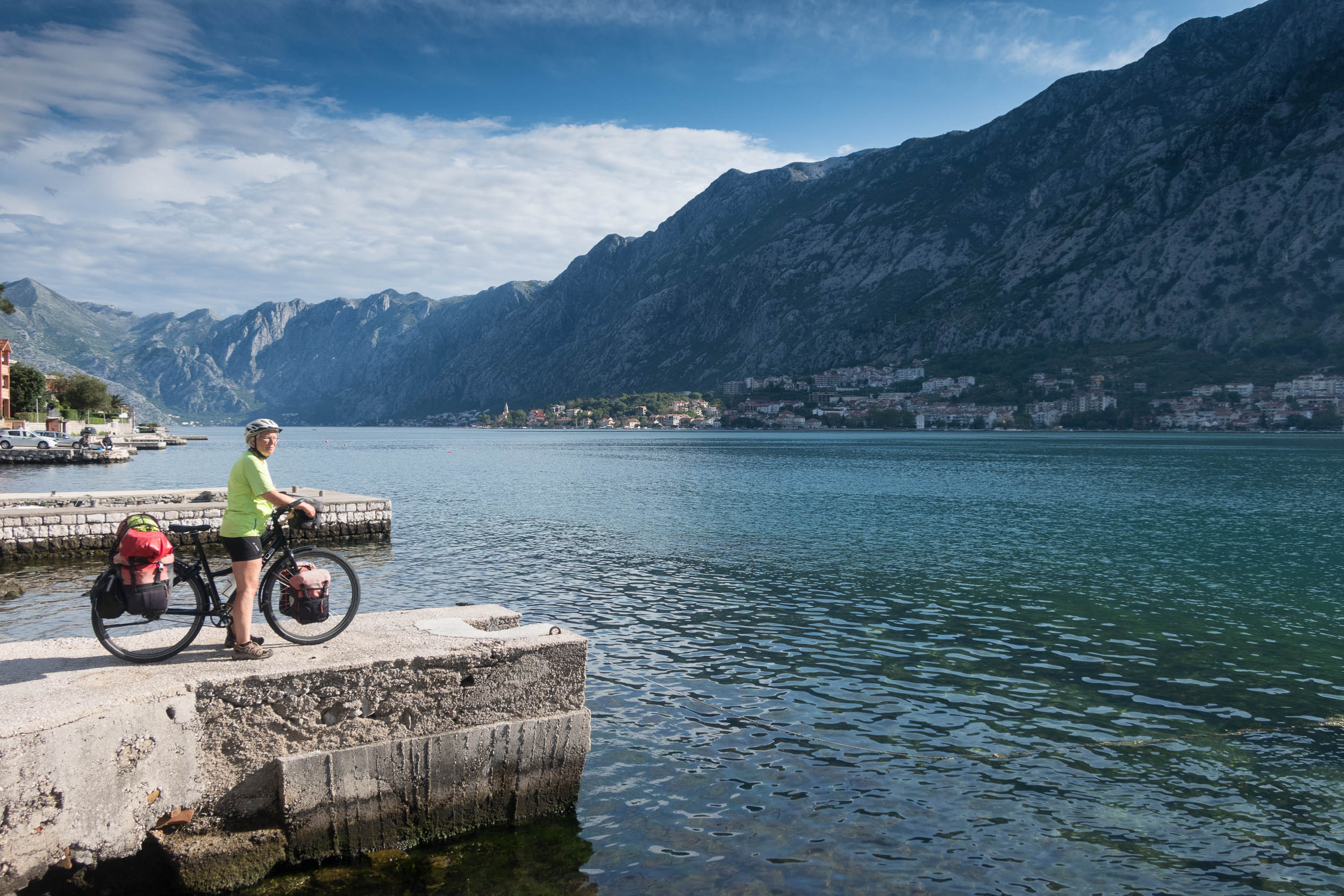 The bay of Kotor 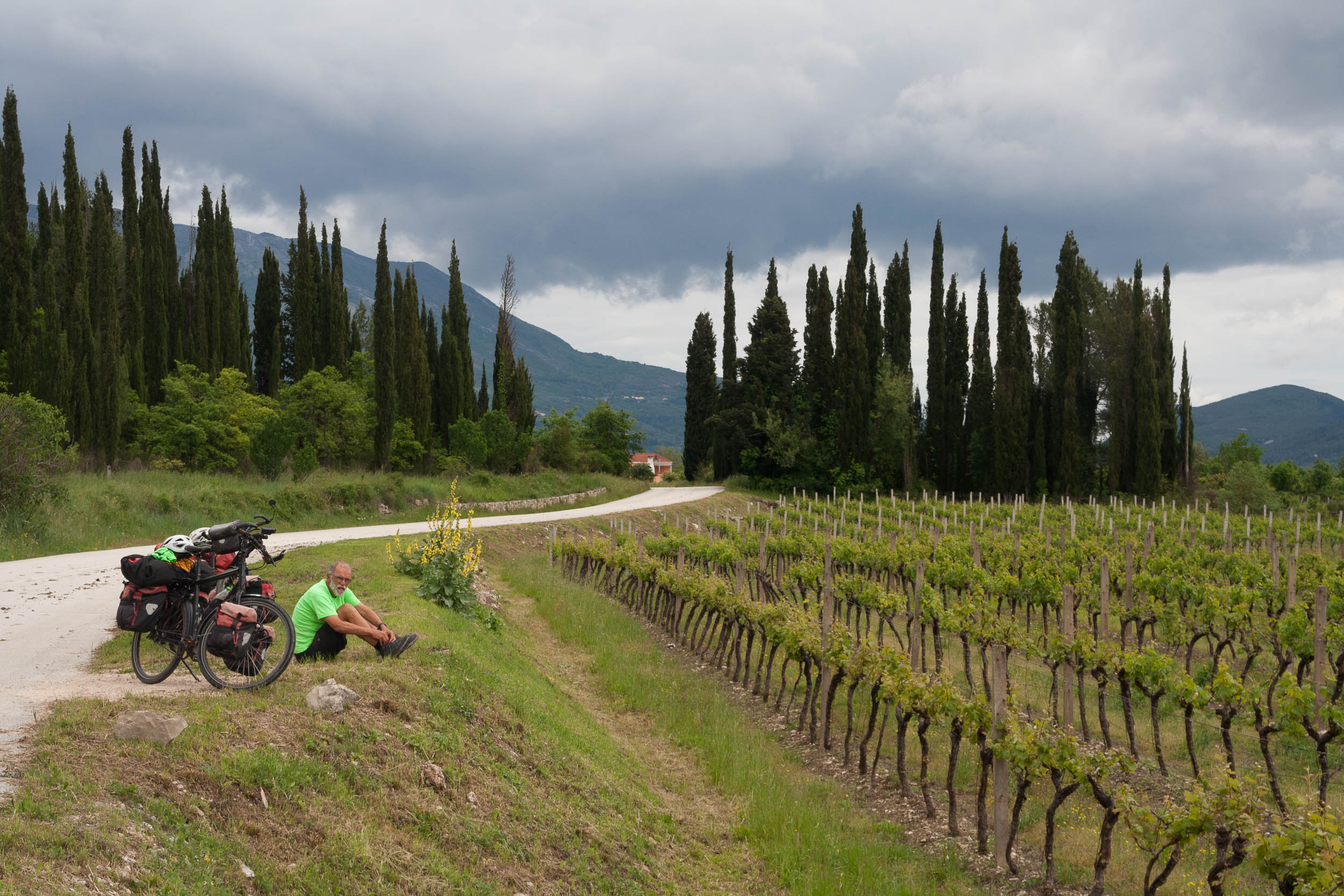 Just across the Croatian border on the road to Cavtat. It feels more like Italy! 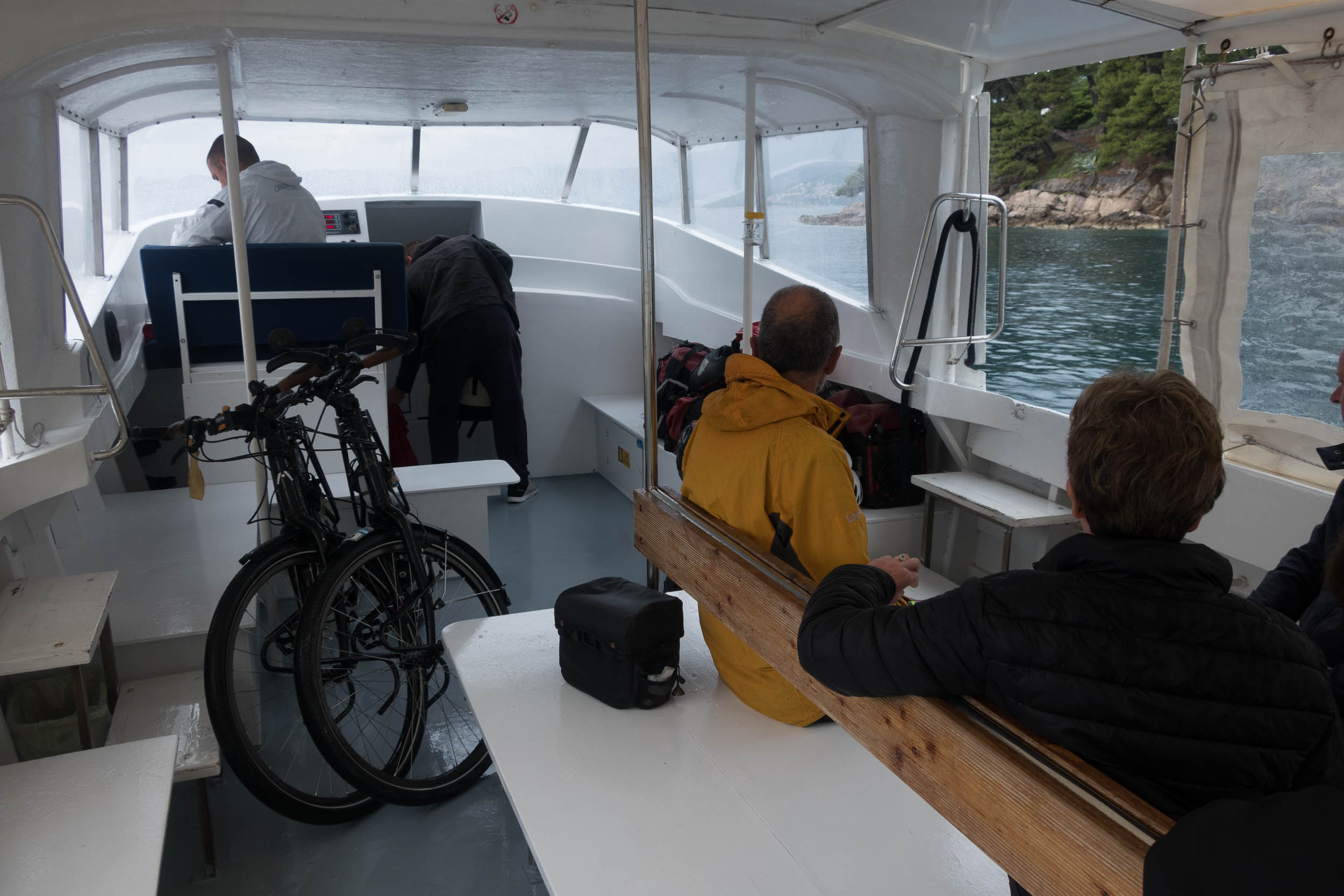 Small boats depart all day to Dubrovnik from Cavtat. 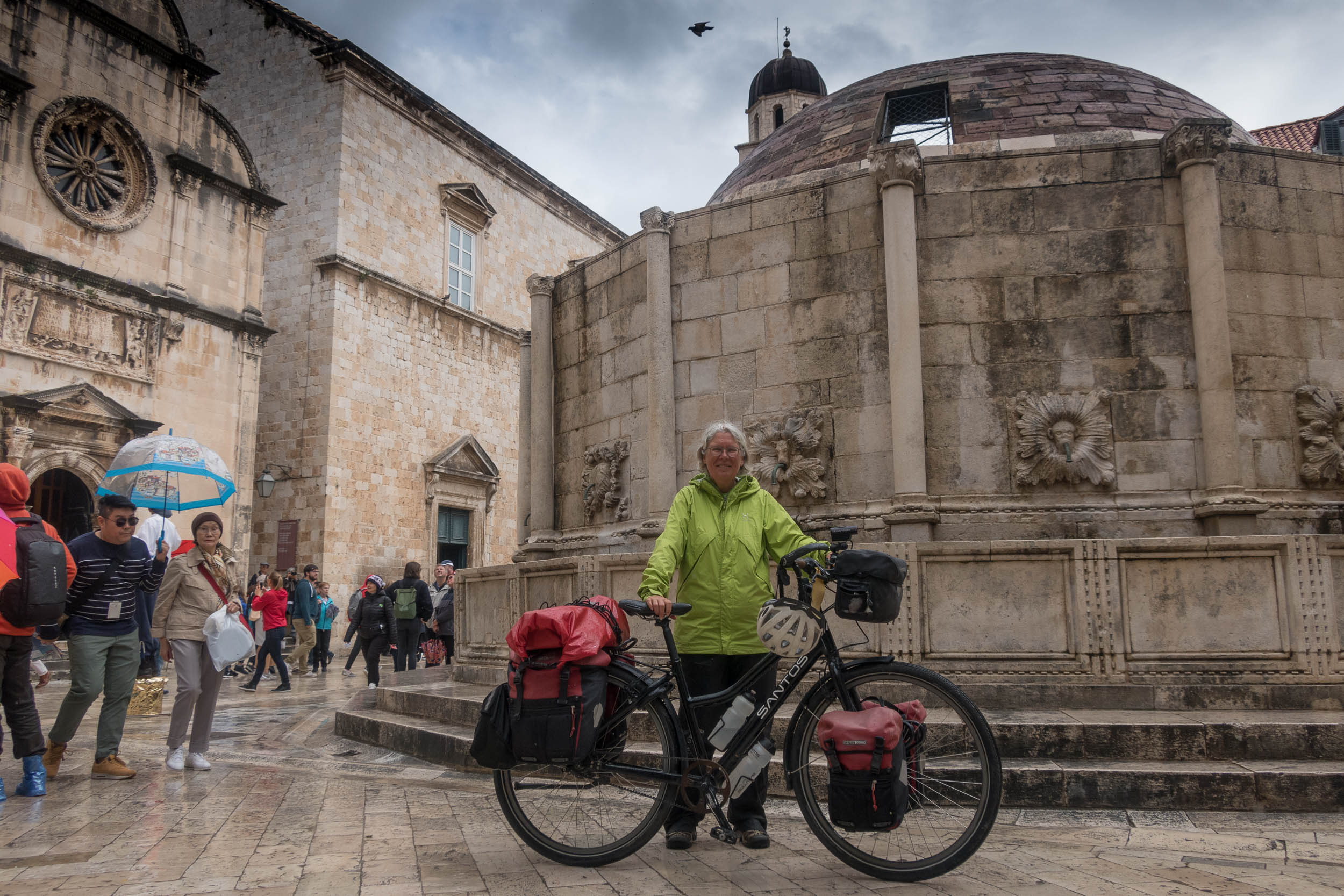 Dubrovnik is really nice, but oh these crowds 🙁

Dubrovnik to Mostar (the Ciro Trail)

From Ivanica (just across the border with Bosnia Herzegovina) to Mostar we followed the Ciro Trail, a bike route on an abandonded railway line. See the separate page with all the details on the Ciro. 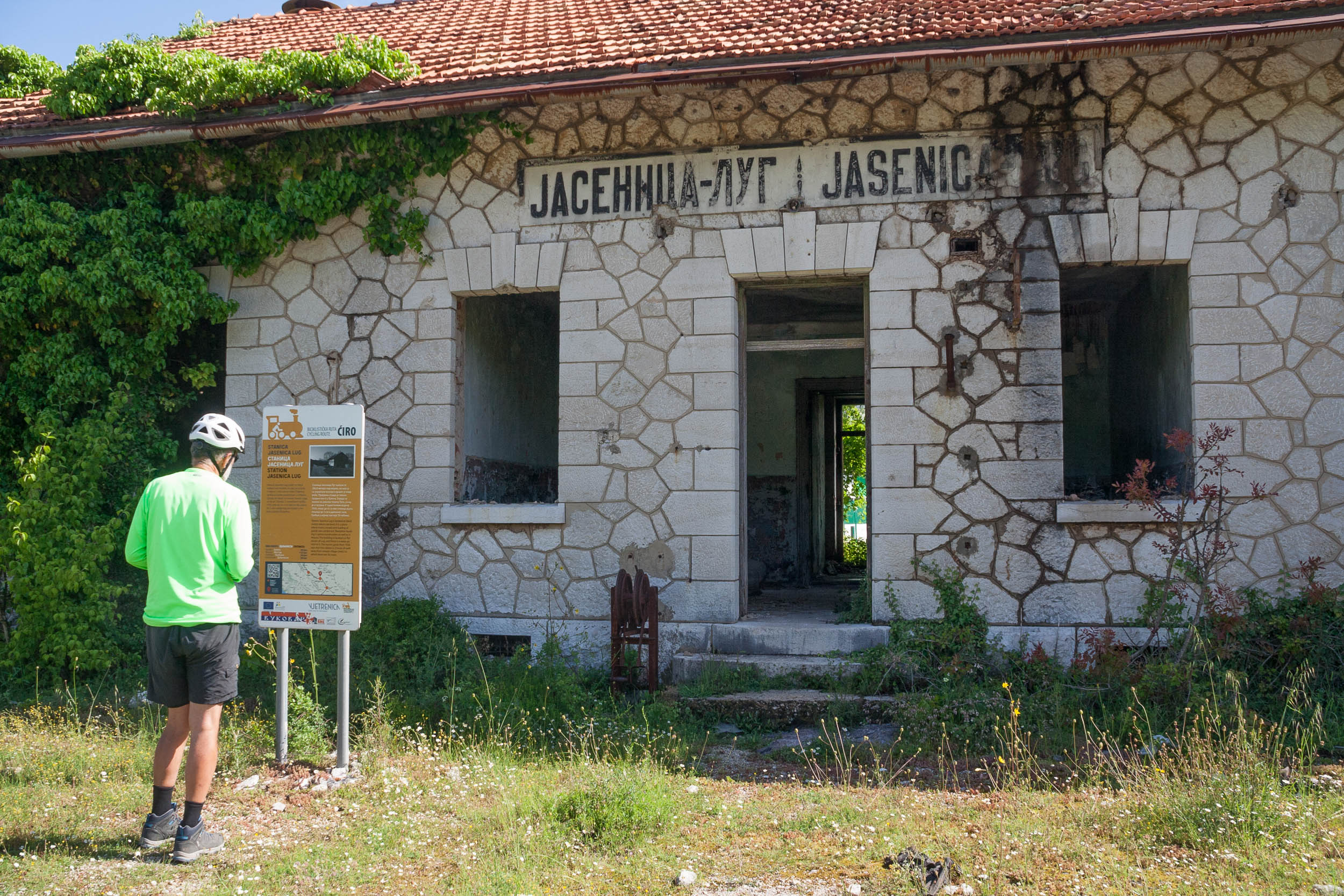 Wanting to avoid the busy coastal Jadranska Magistrale (the Adriatic Highway) we opted for a more complicated route inland on small roads. The countryside here is not very exiting (farmland with hills and mountains) but the ride was pleasant. We made a short stop to visit medieval graves near Cista Provo and found a very nice little road leading to Blato na Cetini (on the river Cetina) where we discovered an unexpected ‘official’ camping spot near the river.

After a night at Blato na Cetini we rode down to Split and it suburbs where the roads became increasingly busy and unpleasant to ride. We found a route to avoid highway 8 but closer to the city center we choose to ride on the side walks (just like the locals do).

From downtown Split we took a ferry to Slatine. Small tourist ferries operate all day. The fare for a bicycle is the same as the fare for a person. The ferry is operated by Bura Line. You can buy tickets online (not for the bicycle ;-). and on the boat. We purchased our tickets online and discovered only just in time 😉 that these tickets show a wrong departure point in the Split Harbour! The correct point is on our map.

From Slatine (or continue alternatively on the same boat to Trogir) it’s an easy ride to Split Airport where our journey ended. 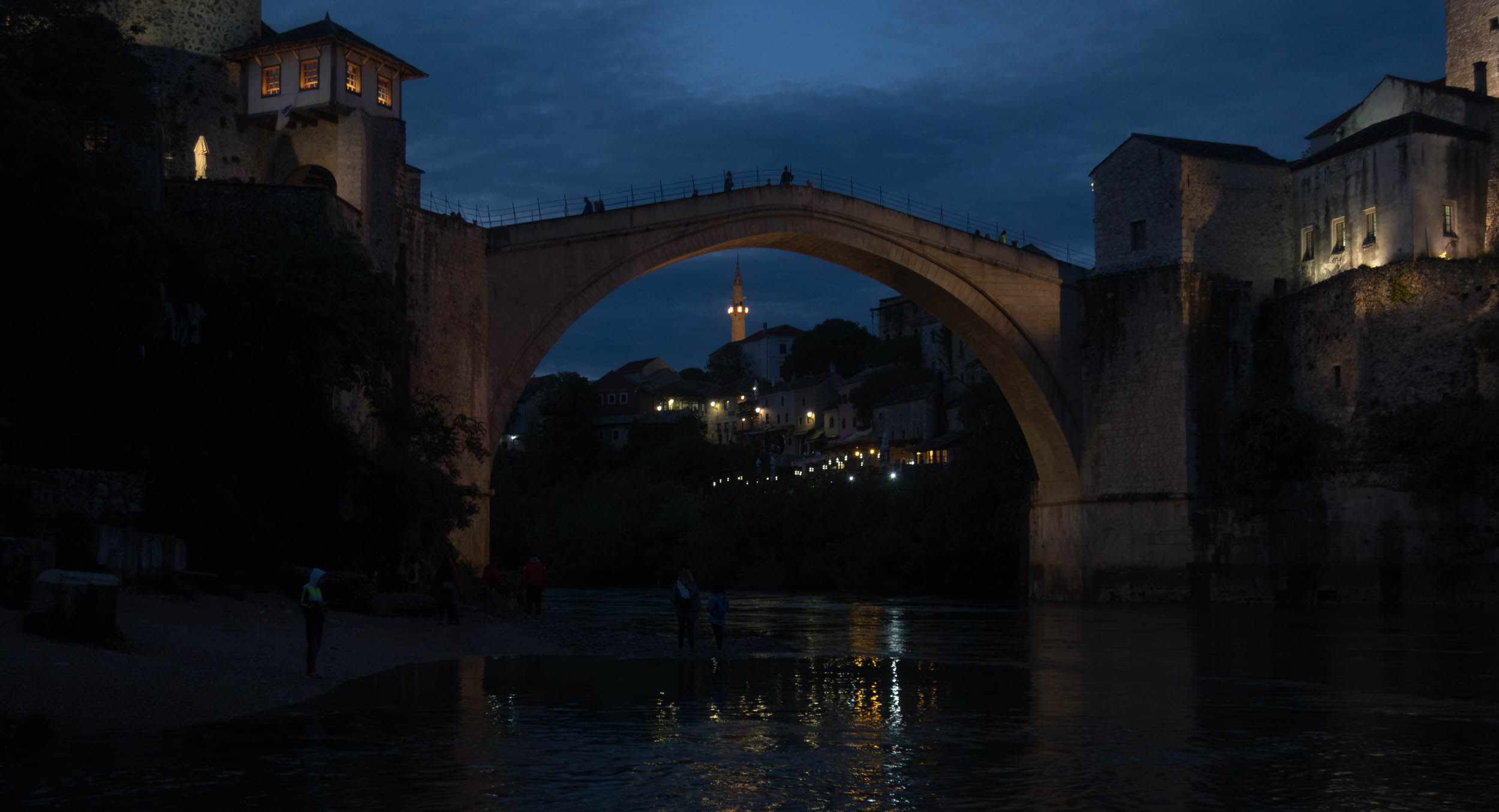 Mostar is a nice town, famous for the bridge which was destroyed in the war but rebuilt 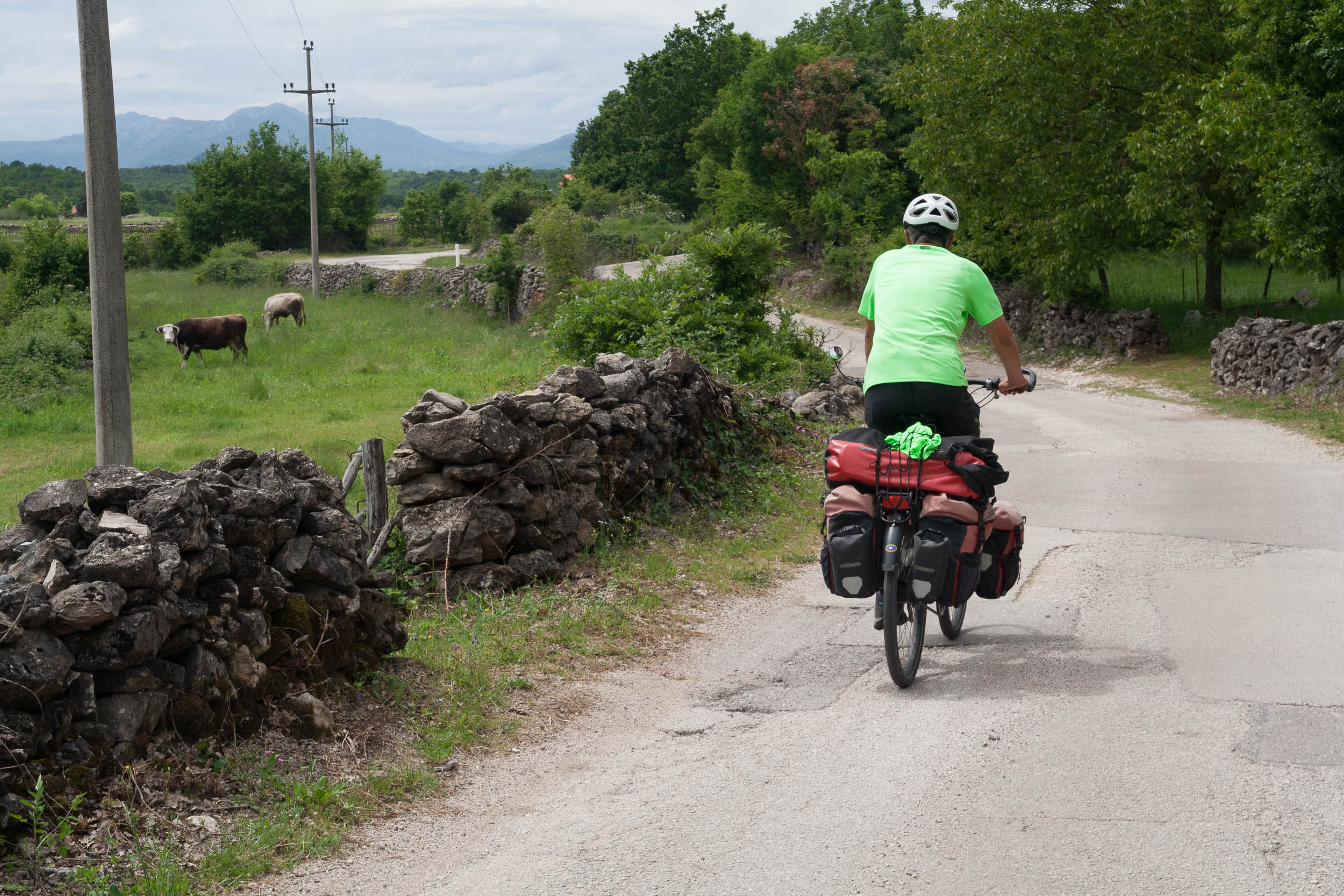 Our plan was to stay away from any main highways…. 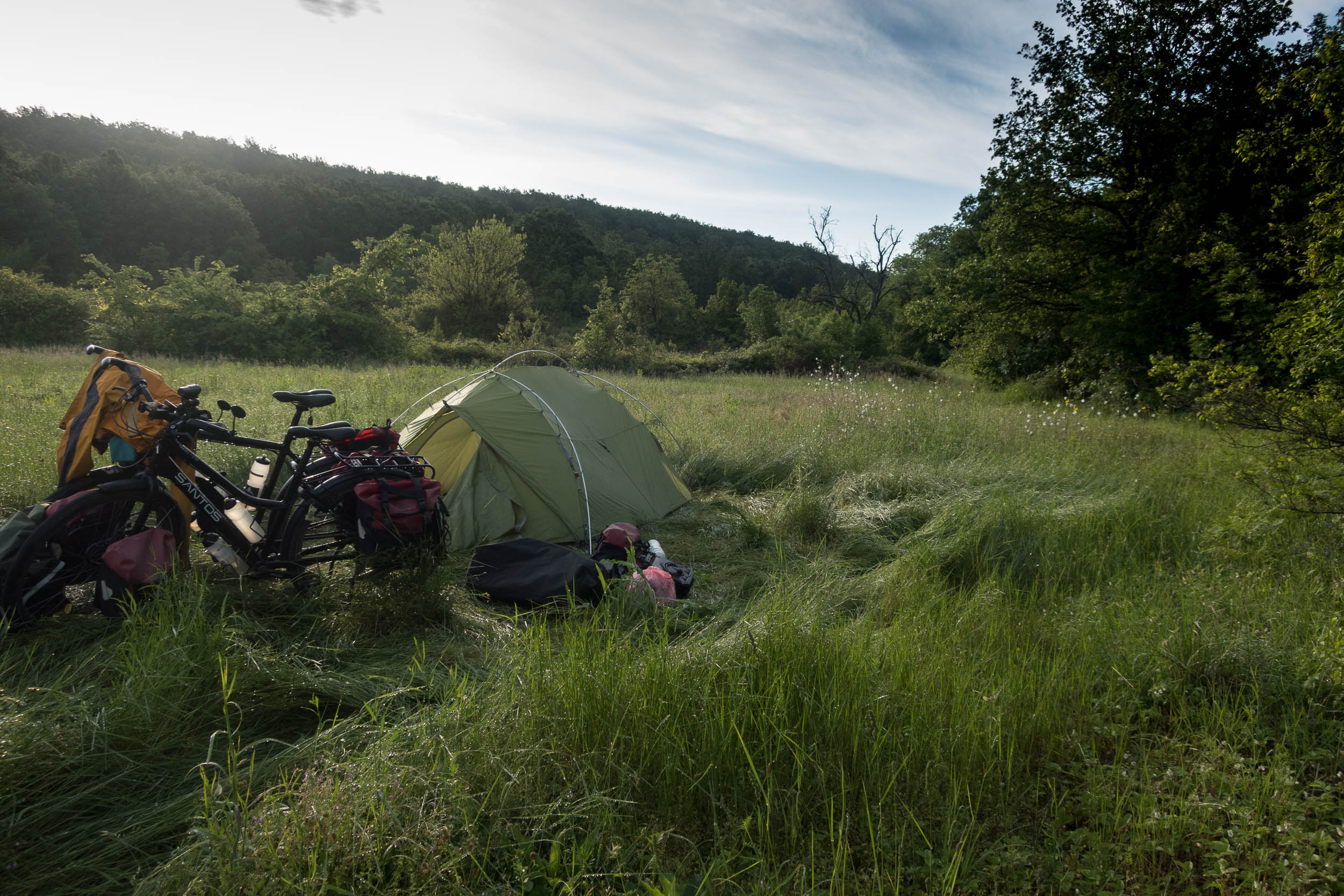 Nice free camp in a meadow near the Croatian border 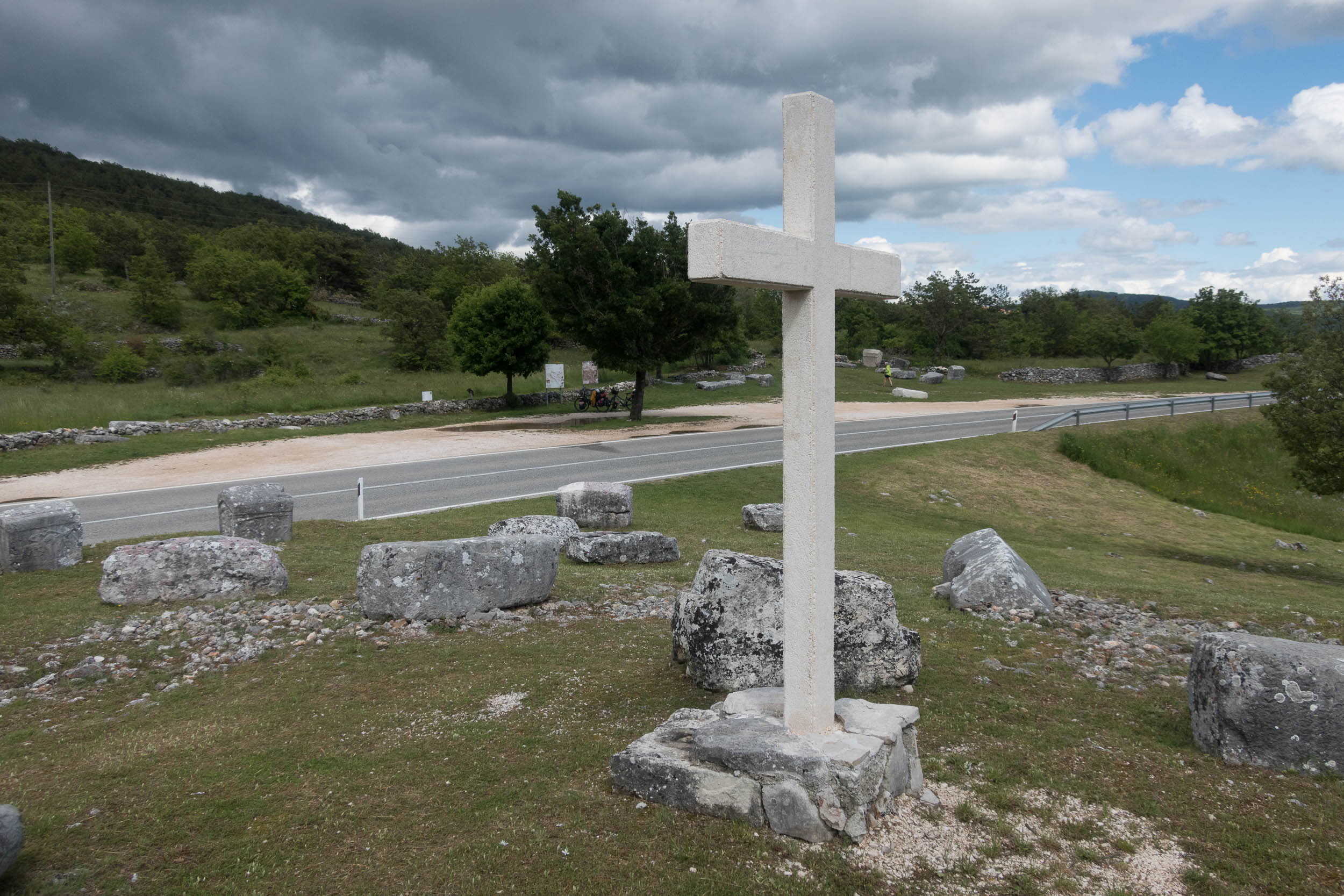 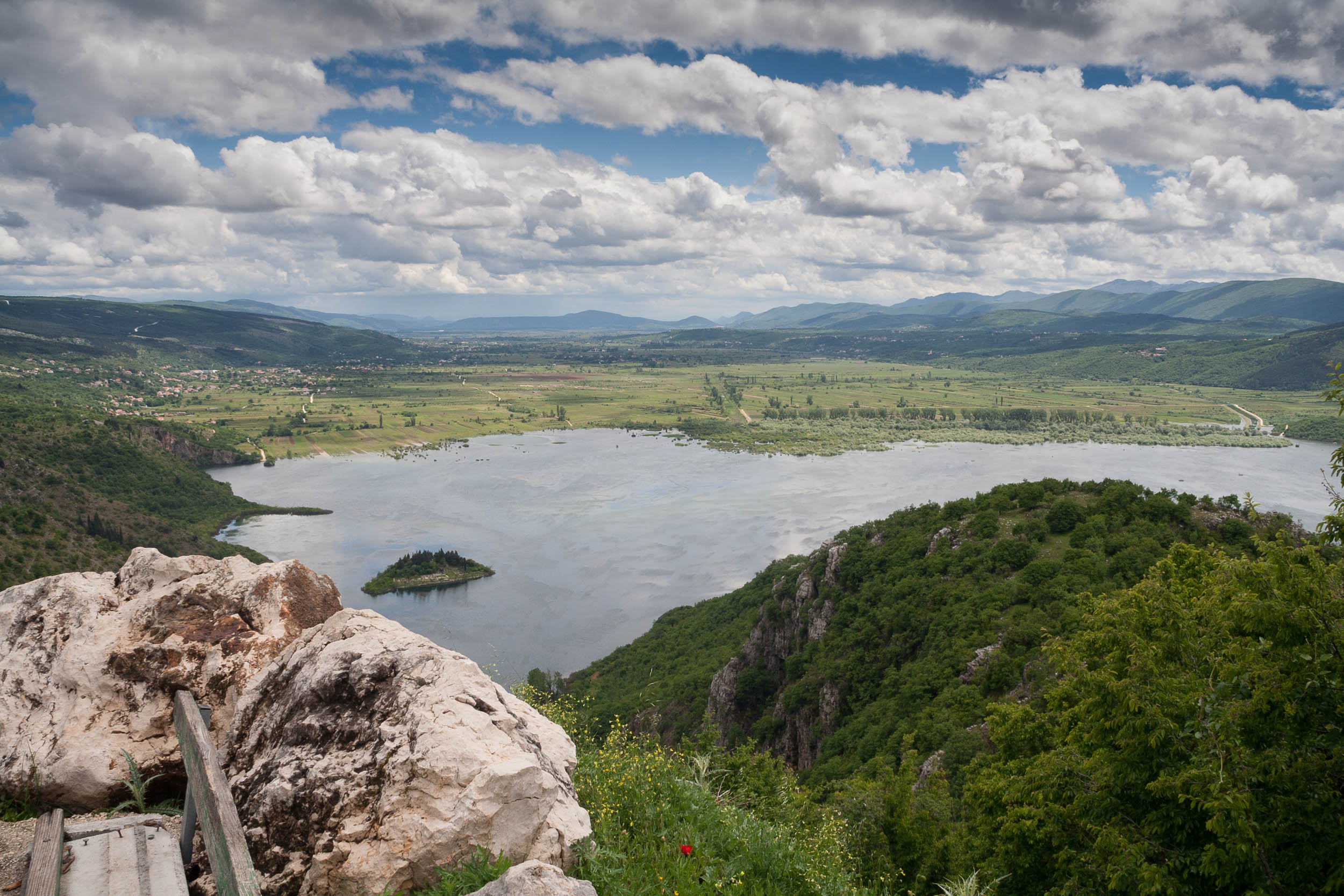 Like everyday, we had plenty of great views between Mostar and Split 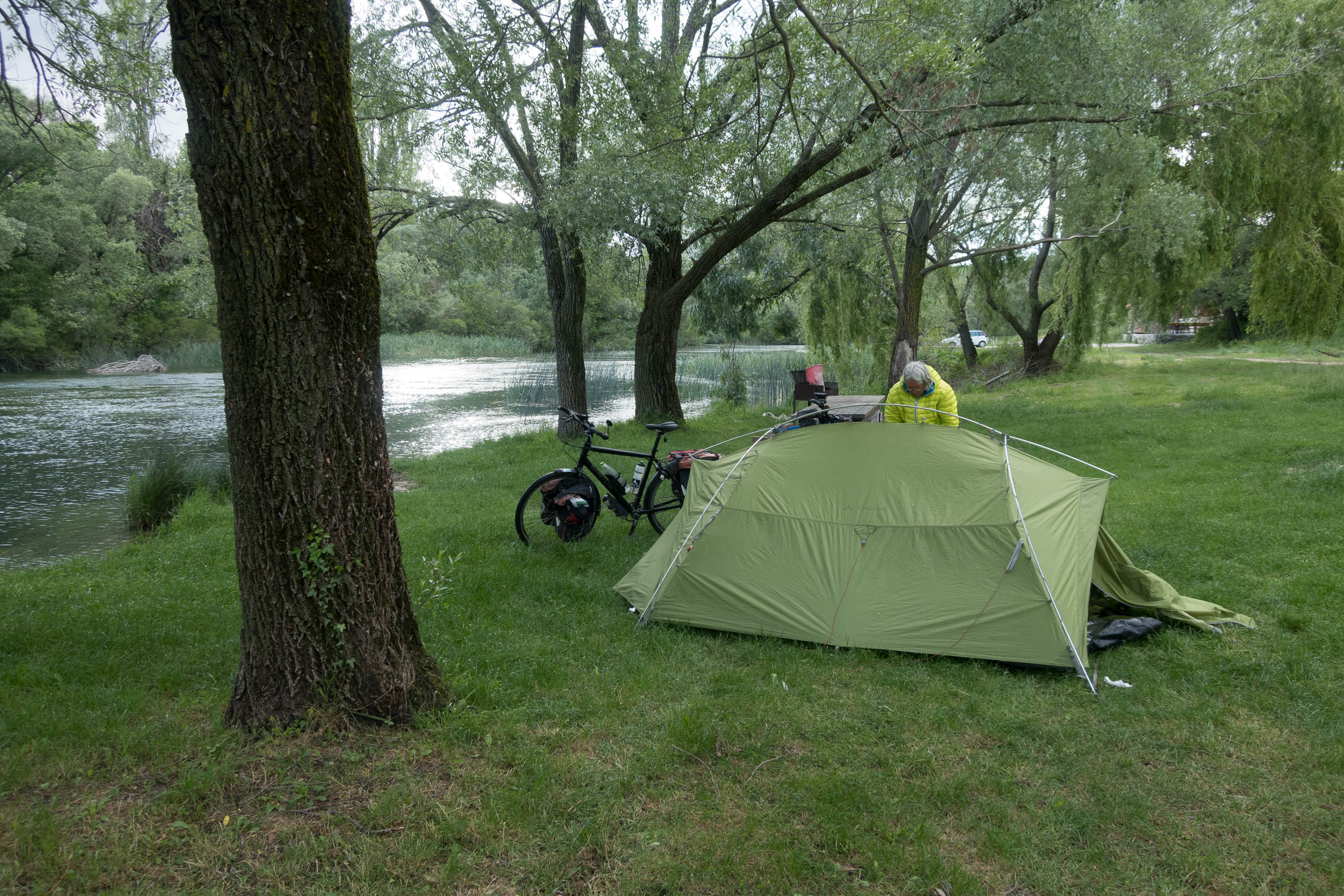 There was a small sign saying ‘camping’ on the road but no facilities other than a restaurant nearby. Still a lovely place to camp near Blato na Cetini. 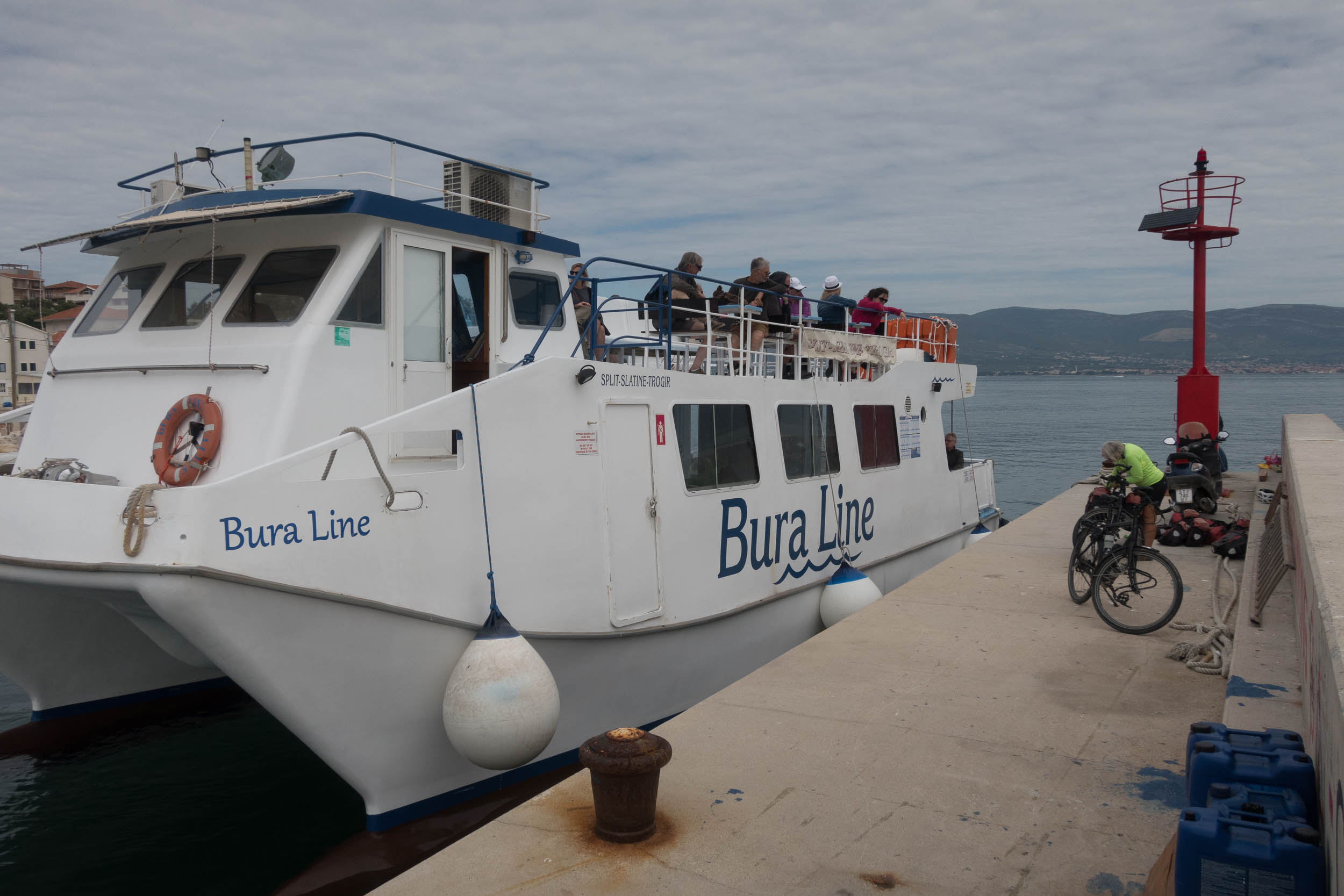 Taking the ferry from Dubrovnik to Slatine (and Trogir). Operated by Bura Line. 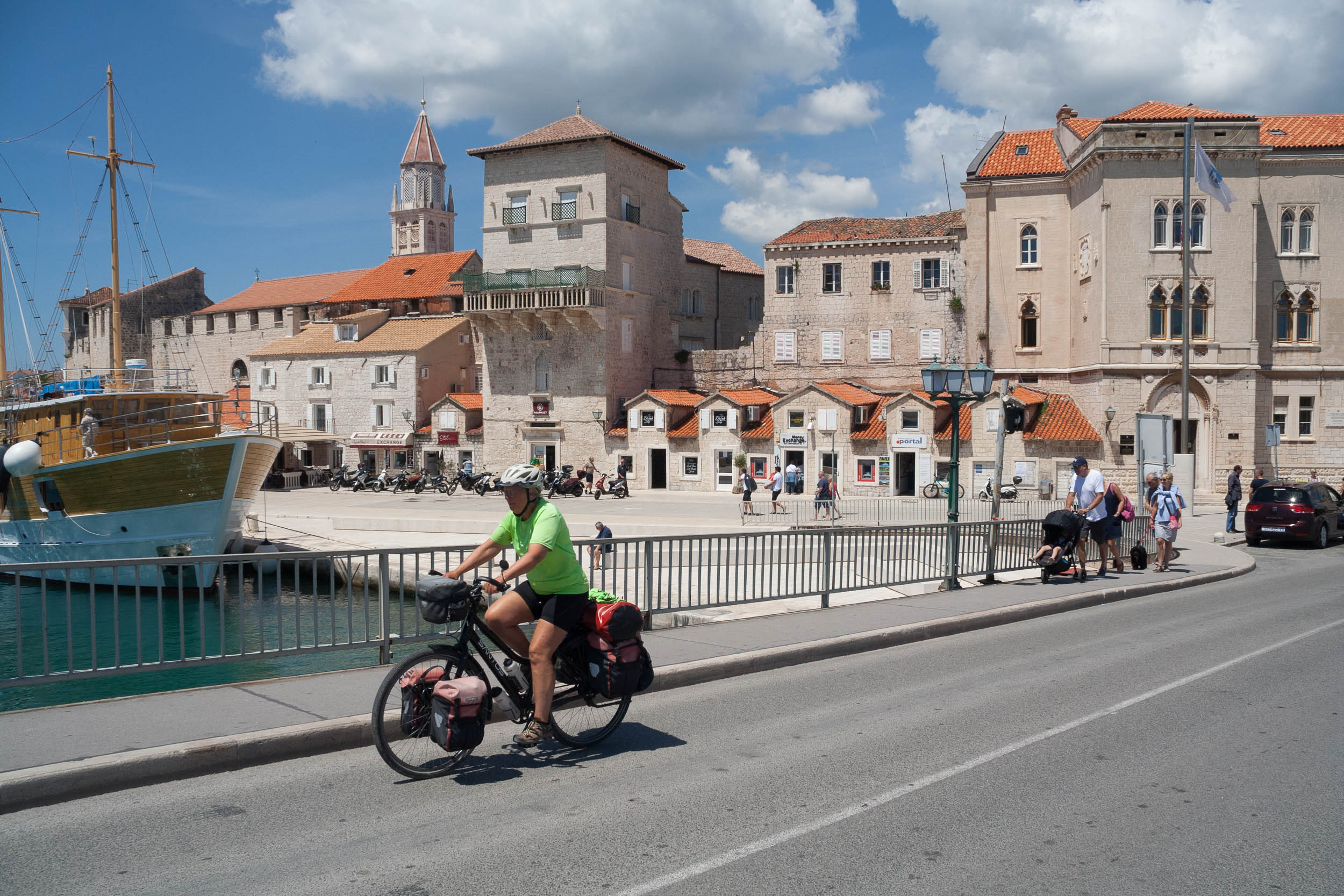 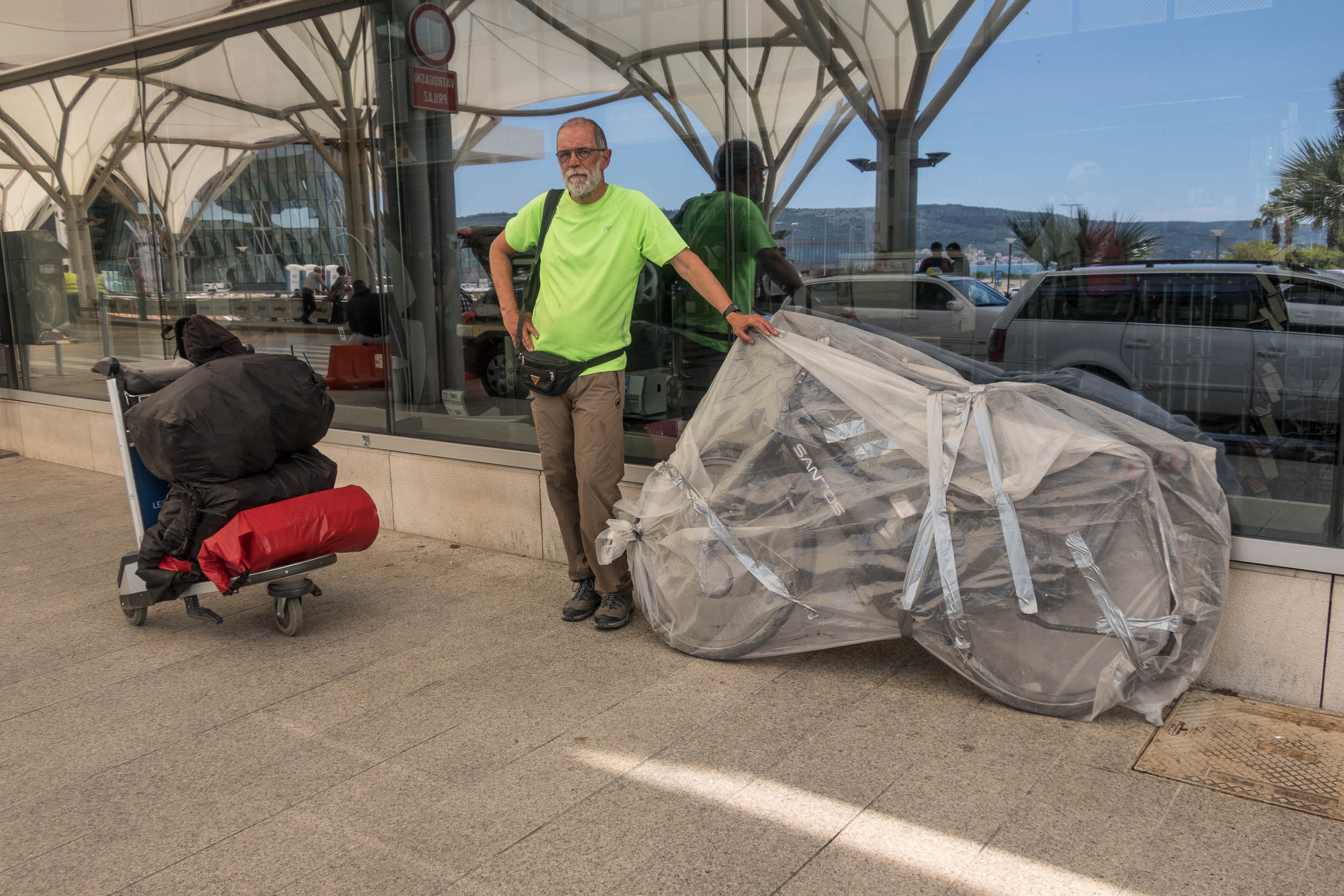