In 1999 we cycled in Zimbabwe in september and october. Zimbabwe was a kind of democracy in those days, years before Robert Mugabe became known as Mad Bob.  From Harare we cycled east almost untill the border with Mozambique. We continued south and then west to Masvingo and the great Zimbabwe Ruins. We went further to Bulawayo and Tshabalala Wildlife Sanctuary, a park where you are allowed to cycle. From Bulawayo we took a bus to Hwange NP. No cycling here, but what a wildlife. Anja lost count at 75 when she counted the elephants at the waterhole at sundown. From the campsite, safe behind electrical fences, we heard the lion roar! Another bus took us to Victoria Falls. The views of the massive water falls and the rainbows hovering above them were very impressive. On a one day tour into Chobe NP in Botswana we saw even more wildlife. 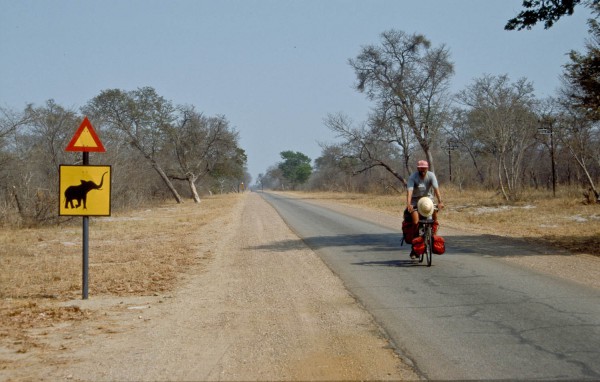 watch out for elephants near Hwange NP

Continue to read about our route, practical information and see  the photos.