Our route in Bolivia

Our route on Google Maps,

Just outside Copacaba a new road is under construction. Cyclists can already use major parts of this road all the way to the border with Peru and avoid the bumpy and dusty old road. Kasani at the Peruvian border is a quiet town and crossing the border is hassleless. 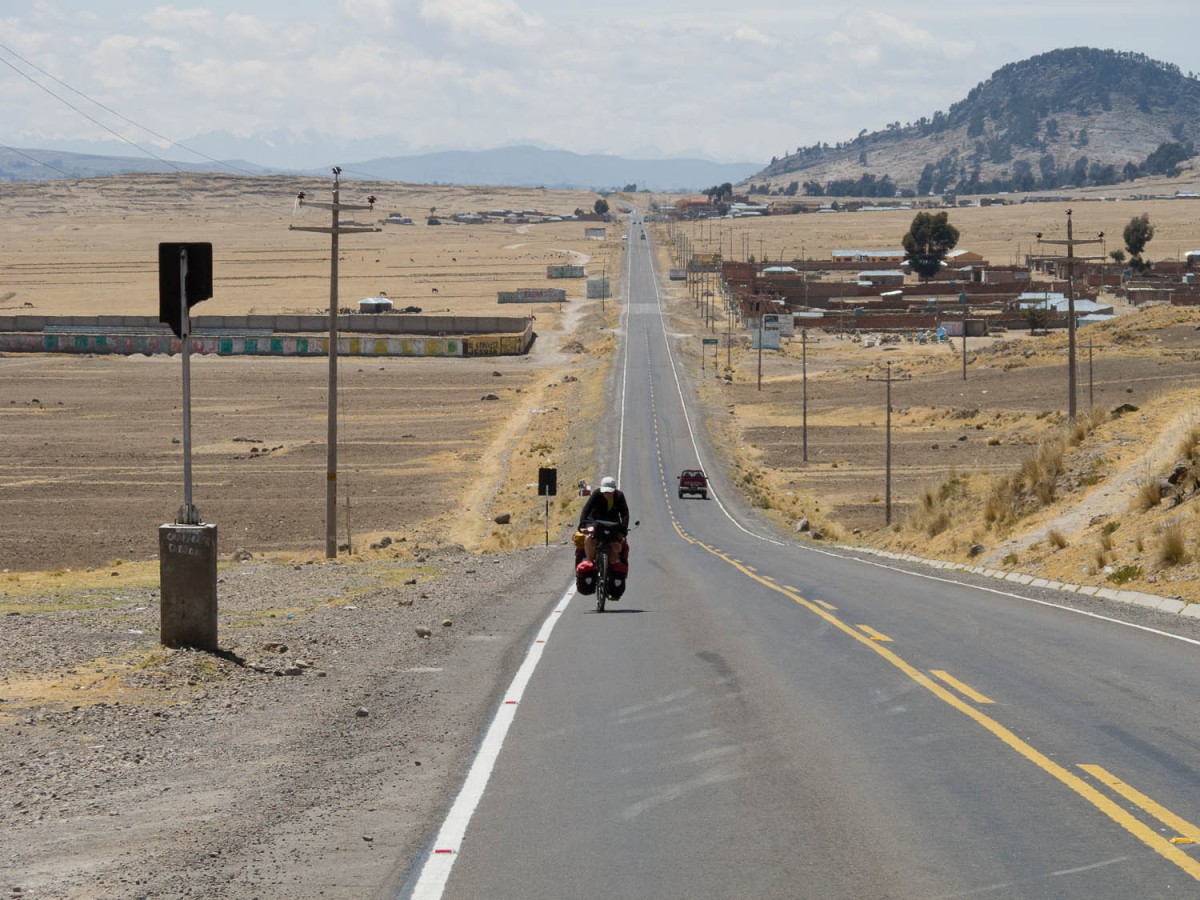 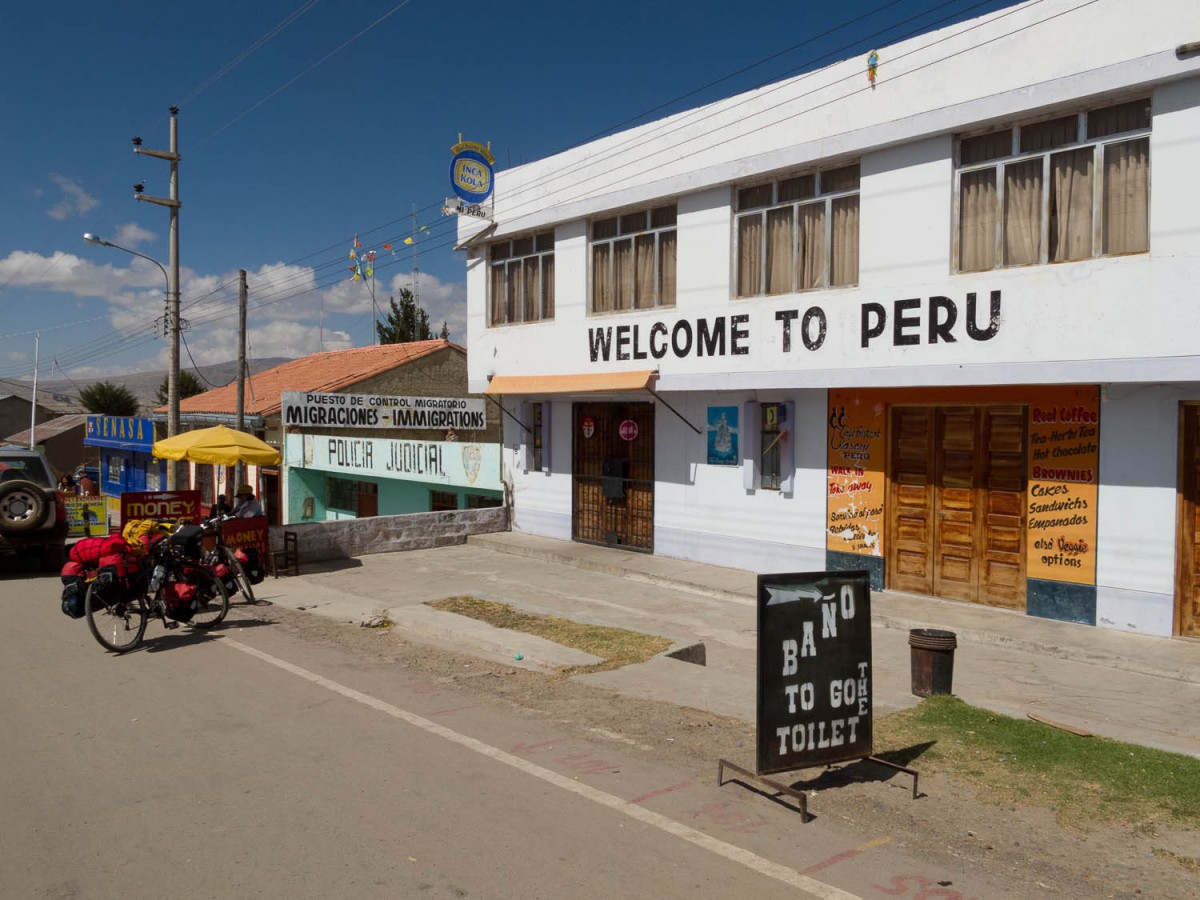 Entering Peru (for one day)

The road on the Peru side is significantly better and smoother; there is a bit more traffic here but not too much. This continues even when you reach the main highway that leads south to the next border town: Desaguadero. No facilities or major towns or villages until you reach D. Continue straight to the border or if you prefer to stay a night here, the hotel Poasada Real (no signs, see map) provides good accommodation.

Once dusty and chaotic Desaguadero is behind you the cycling along the new and wide road to Tiwanaku and further to La Paz is easy. The road has a wide shoulder and traffic (on a Sunday) was at acceptable levels. 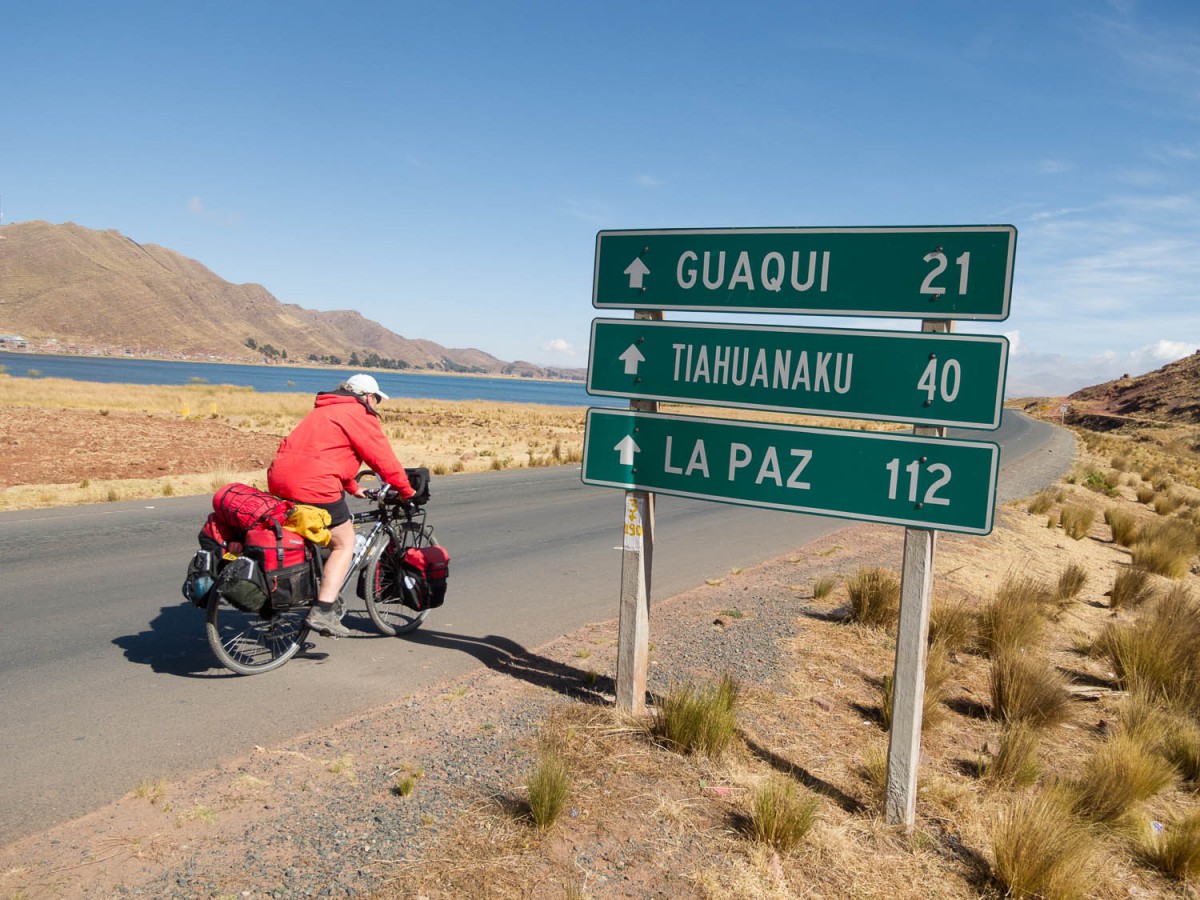 On the road to Tihuanaku

Beyond the town of Gauqui the shoulder detoriates but can still be used to cycle. Most of the road is flat with some minor ups and downs. Looking for a bed in Tiwanaku: the (new) hotel …. near the ruins is recommended.

As you approach El Alto the traffic increases. The road climbs to 4025 m and the viewpoint of Lloco Lloco for commanding views of distant El Alto (and La Paz) and the snowy peaks of the Cordillera Real. 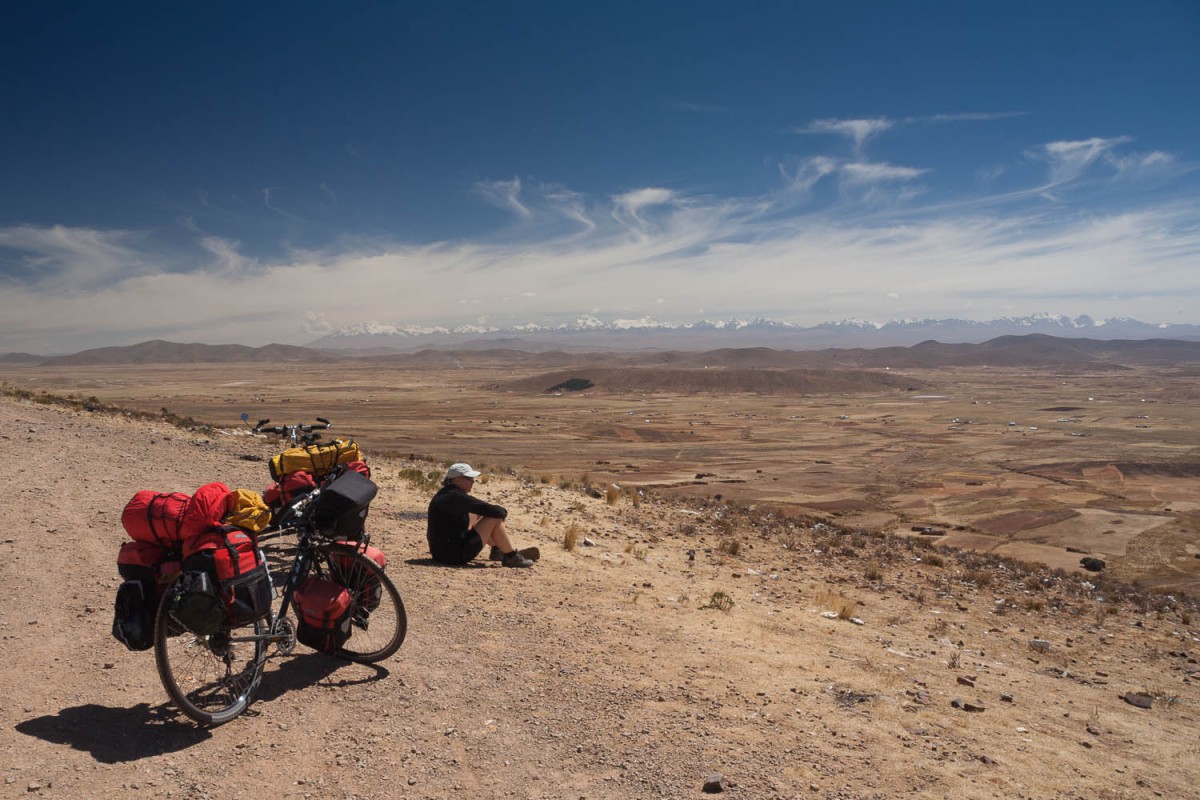 View of the Cordillera Real

At the town of Jala we turned right on an unpaved and very rough road to Viacha. The 15 kms road is very bumpy and there is a never-ending stream of heavy trucks carrying sand, stones and rocks to the giant cement factory at Viacha. Lot’s of dust although water trucks are driving up and down this road to keep dust low. Viacha is a busy town with a hostal on the Plaza Ballavian (signposted) and a basic alojamiento a few blocks away. 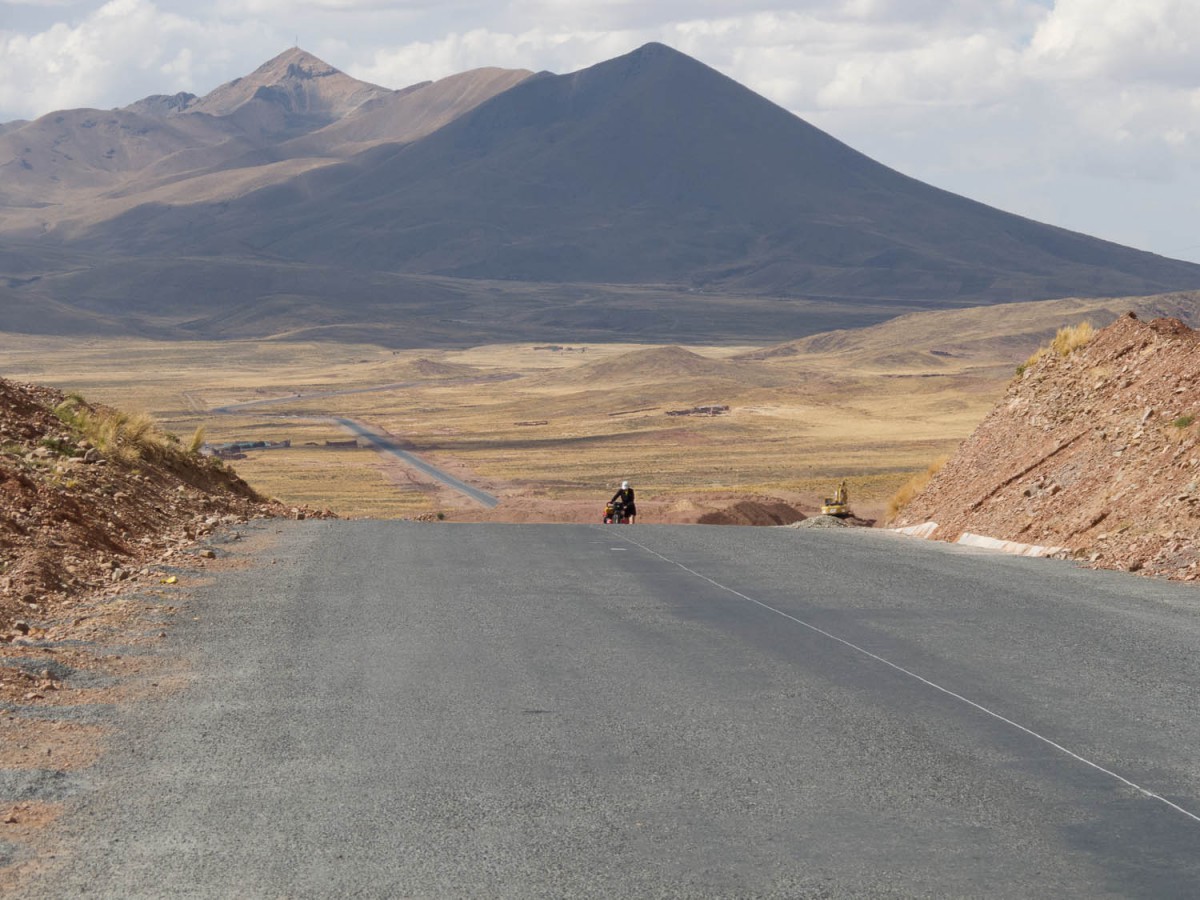 Just outside Viacha starts an excellent new road all the way to Coro Coro. Almost no traffic here and only the last 10 kms has some hills to climb. Although CC has the largest copper mine in Bolivia there is not a lot to do or see. A basic alojamiento (no signs) at the plaza near the church. A shop opposite the hospital sells some bike parts.

We had major troubles getting out of Corocoro. At first we were directed to the lower part of Corocoro where the road to Gallapa would be. 13 km out of town we discovered we were travelling in the wrong direction and we decided to return. Starting again at the upper part of town (near the church) we then found a road that seemed to go in the right direction.

In Corocoro start from the plaza, take the road at the right side of the church and then turn left and keep on cycling until you reach the village of Pando (there is a pension here). On the Pando plaza turn left (south) and keep on cycling. The road is bumpy with lots of stones and small climbs. 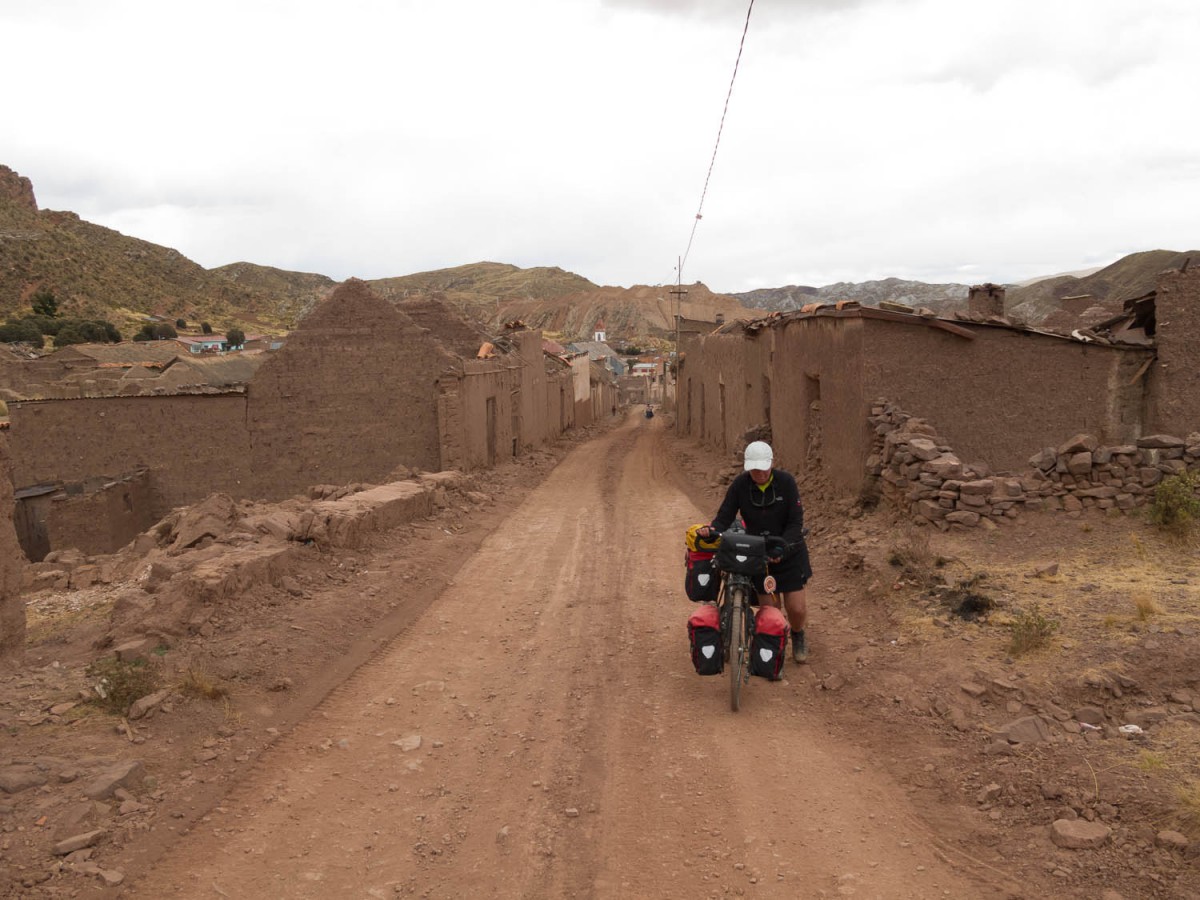 The suburbs of Coro Coro

Finding the right track to Gallapa was a real challenge as the road had many junctions. There are almost no villages ( a few very small settlements only) so finding someone to ask for directions was a problem. After descending from an escarpment we finally reached the Calacota – Gallapa road. Until then we had encountered no traffic at all! This road is wider but still bumpy and rocky. 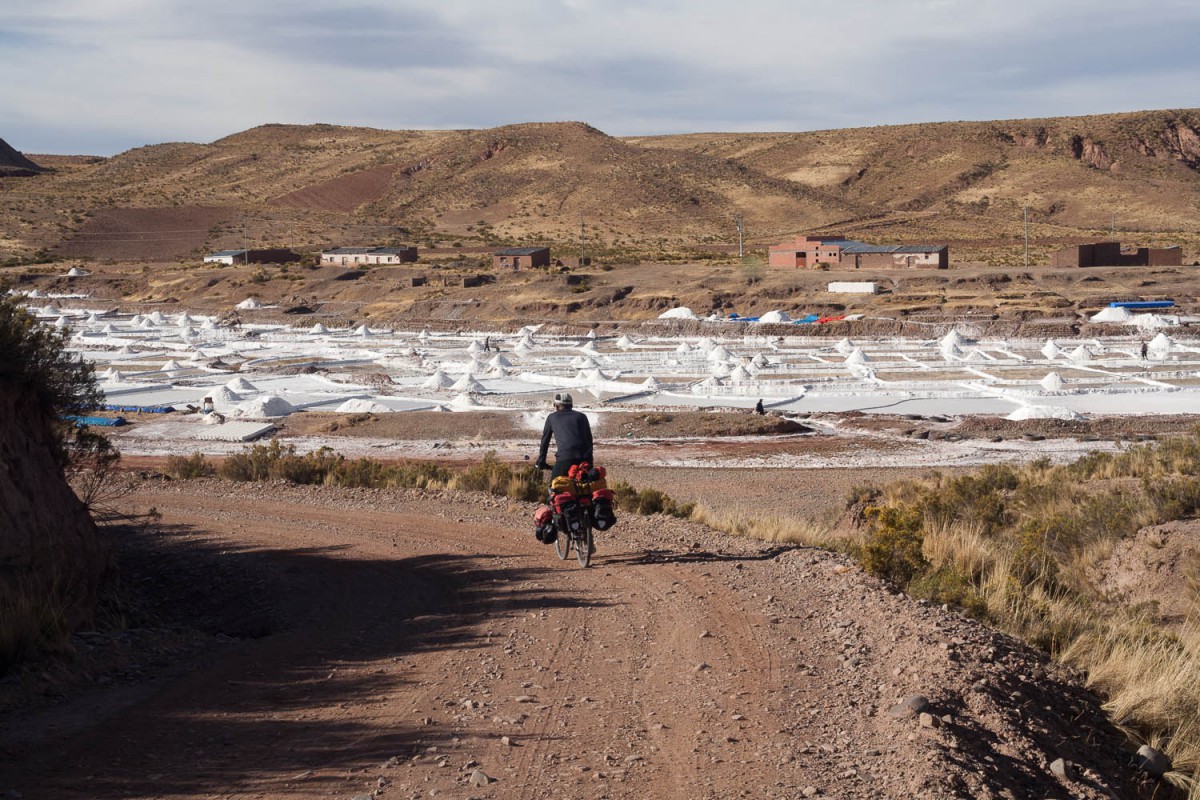 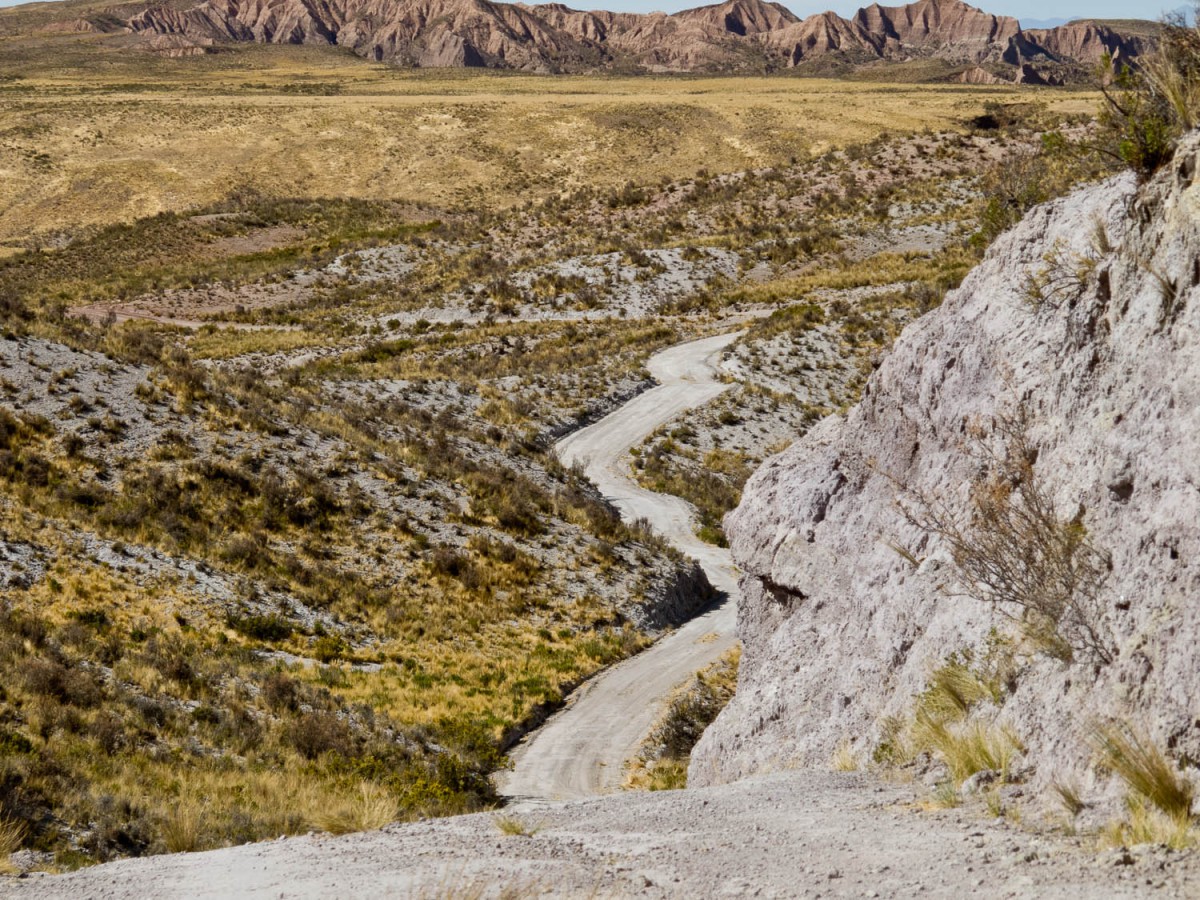 On the road to Gallapa 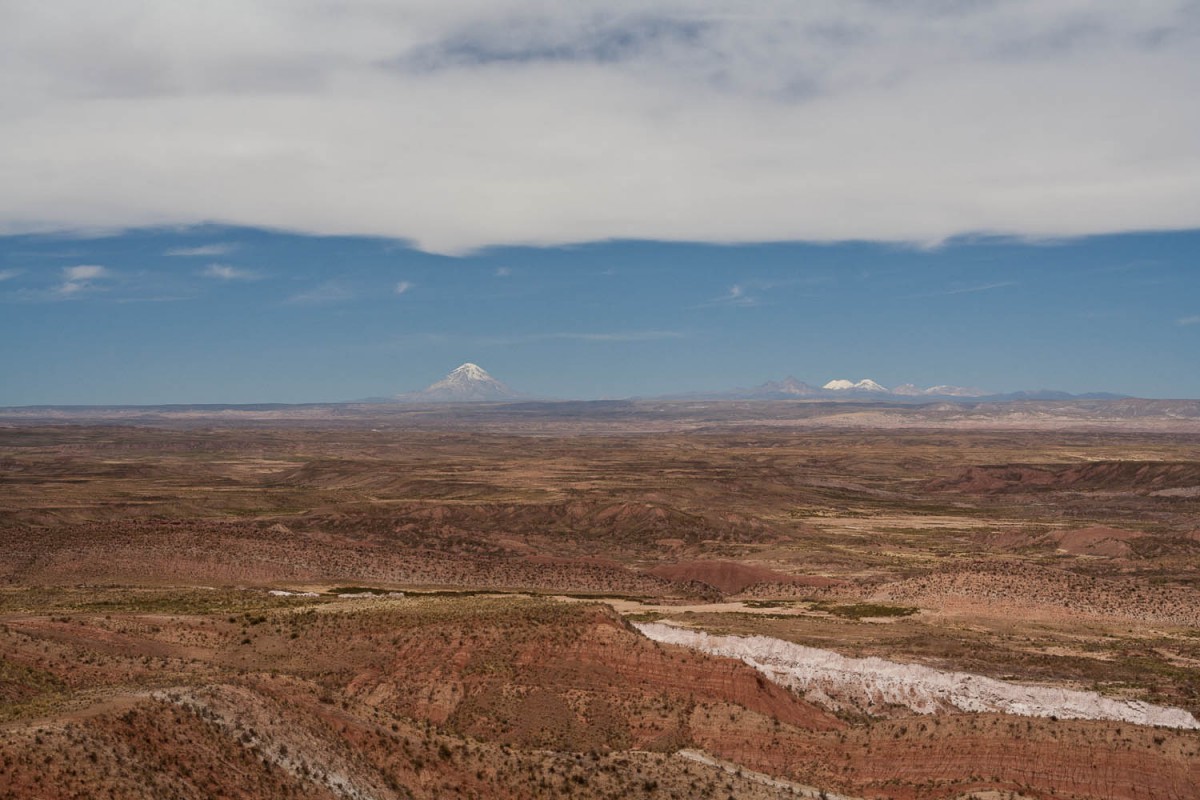 Gallapa itself is a small town with a few shops that sell bottled drinking water, bread and other basics.

A few kms further is the paved highway number 4 and the bridge across the Rio Desaguadero. This road is good and has a small shoulder just wide enough to bike on. Most of the traffic here are heavy trucks bringing or getting goods to and from Chili.

The junction for Curauara de Carangas has shops and restaurants. There even is an alojamiento. The road follows a river valley (flat) and ultimately climbs to an altitude of 4300 m; the highest point of this road before the Bolivia – Chili border.

At Cruce Cosapa ( the turn-off to Cosapa) there are again some shops and eateries. Finally you descend to the junction with the Sajama road. Lagunas is another 3 kms further downhill. The Sajama main road is very soft and bumpy; riding this road is a real problem. 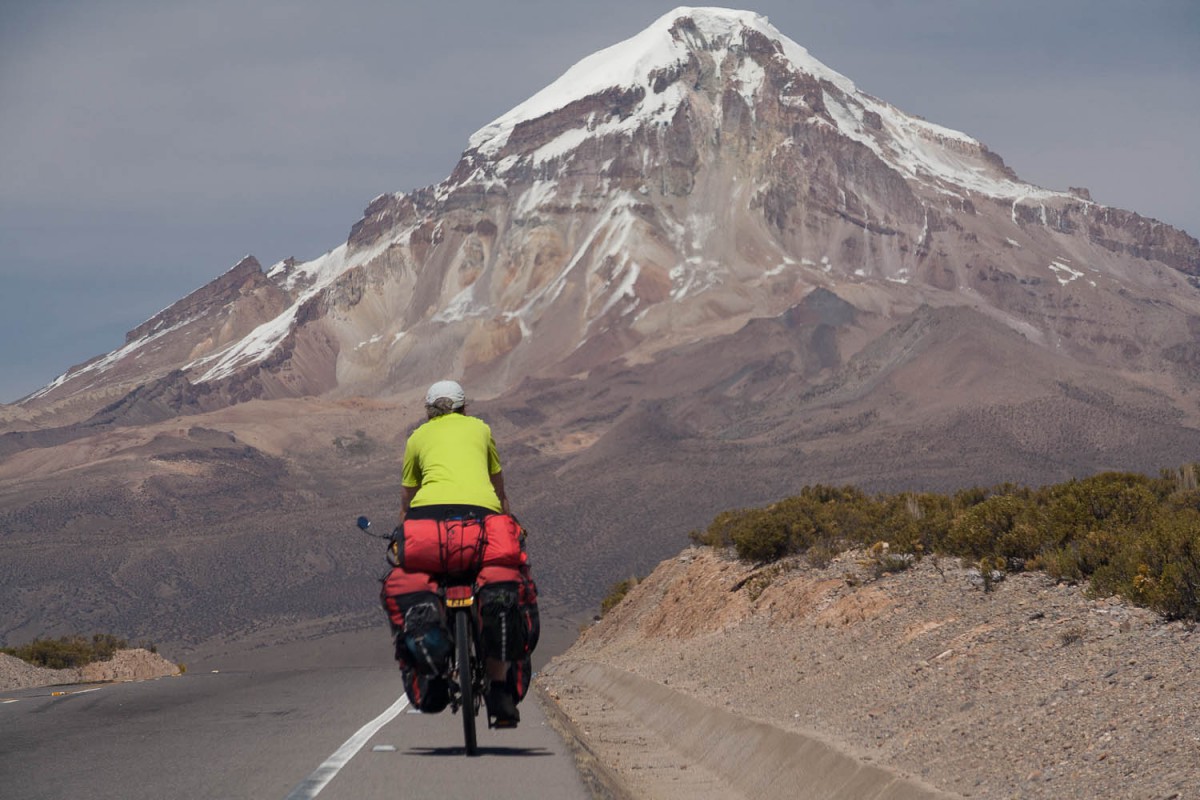 Sajama has at least two hostals and several home stays. You can also camp here. There are shops and an internet cafe on the main plaza.

Because we thought that cycling from Sajama to Sabaya would cost us too many days to reach Uyuni in time, we decided to charter a local taxi to drive us to Escara. Escara, we calculated, would be a convenient starting point to bike all the way to the Salar and finally reach the town of Uyuni. 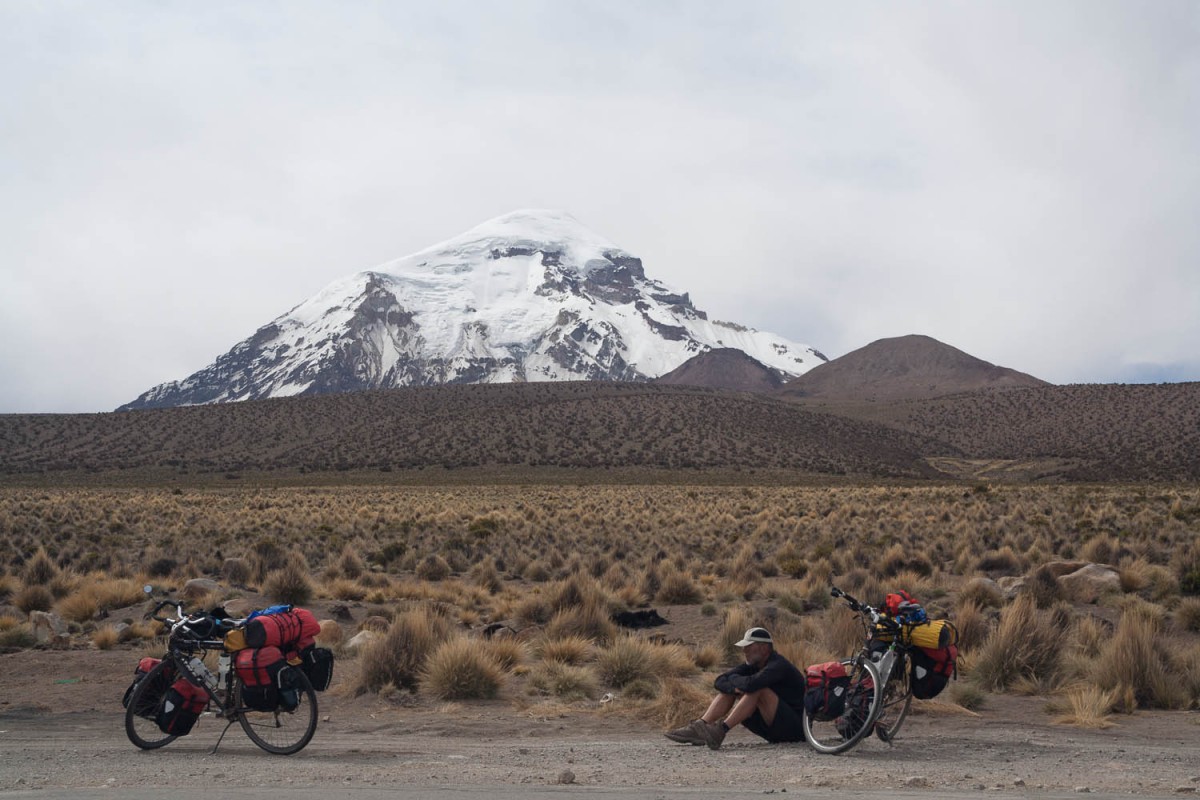 Surprisingly our driver did not go straight south to Sabaya (the road was too bad he told us) but opted for a faster drive via Cosapa (good gravel) and Turco. New roads are under construction here and will be finished soon. 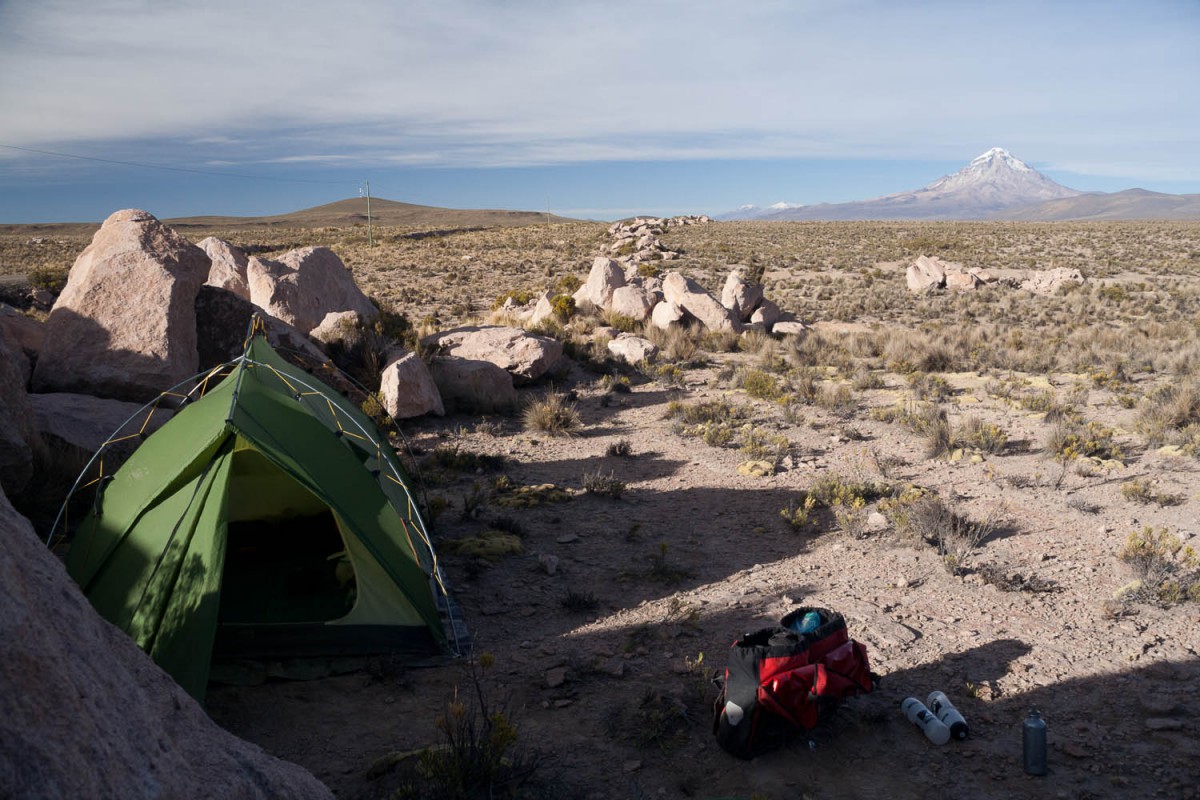 At Huachachalla we turned south on a rough dirt road to reach the friendly village of Escara, The so called Camino Chipaya starts just south of Escara just beyond the bridge.

The alternative route of crossing the Salar the Coipasa was not an option as we were told that there was a lot of water on the salar making a crossing rather difficult. Although shalow the water on the salar would probably obscure the holes on the tracks making cycling potentially dangerous. We also were told that the Salar de Coipasa is always much wetter than the Uyuni salar.

Escara is a very small pleasant village with probably one or two tiendas but nothing else. Continue south on a bumpy and corrugated road. Until you will reach the village of San Martin (much further south) the road will be on and off soft and sandy and stony and bumpy. 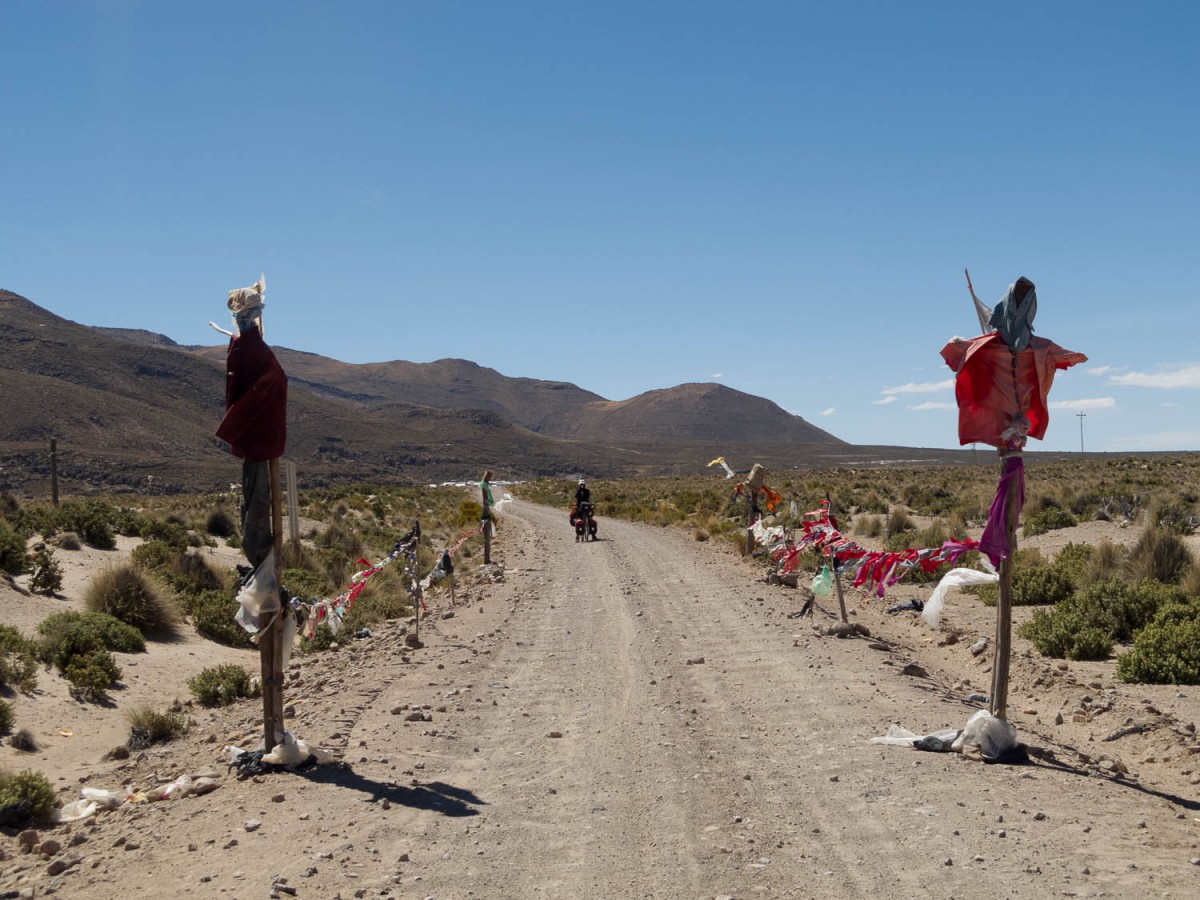 Once you have crossed a bridge you enter the Chipaya aera. The countryside is flat and featureless with no places to shelter or pitch a tent out of sight. If you want to camp, best pitch your tent before the bridge. We had to battle a strong head wind whipping up huge clouds of dust and sand. In Chipaya itself we were told that there was no accommodation and we stayed one night in the mayors office. The next morning we were asked a fee for “accommodation” and “protection” of 80 Bolivianos. 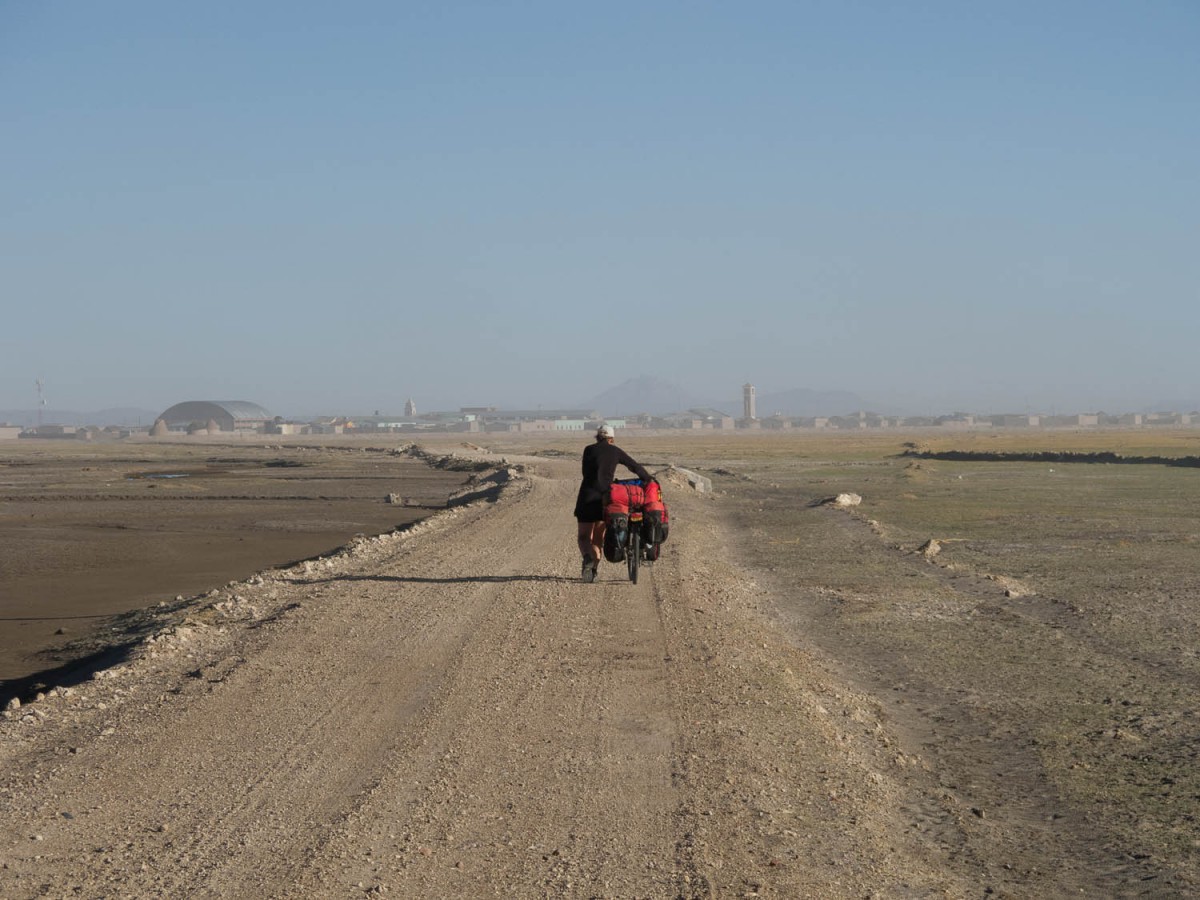 South of Chipaya there are a few places were the river has to be crossed. There are small rickety bridges for pedestrians and motorbikes. About 45 km south is another official bridge just north of the village of Challa Kota. The road north of the bridge is extremely soft and sandy. You either have to push or bike on tracks that lead parallel of this “road”. Hard work here. South of the bridge the road is much better and beyond Challa Kota there are many excellent miles of hard packed dirt. Challa Kota is very small (we saw no shop) but we got water here from a private home from a well. 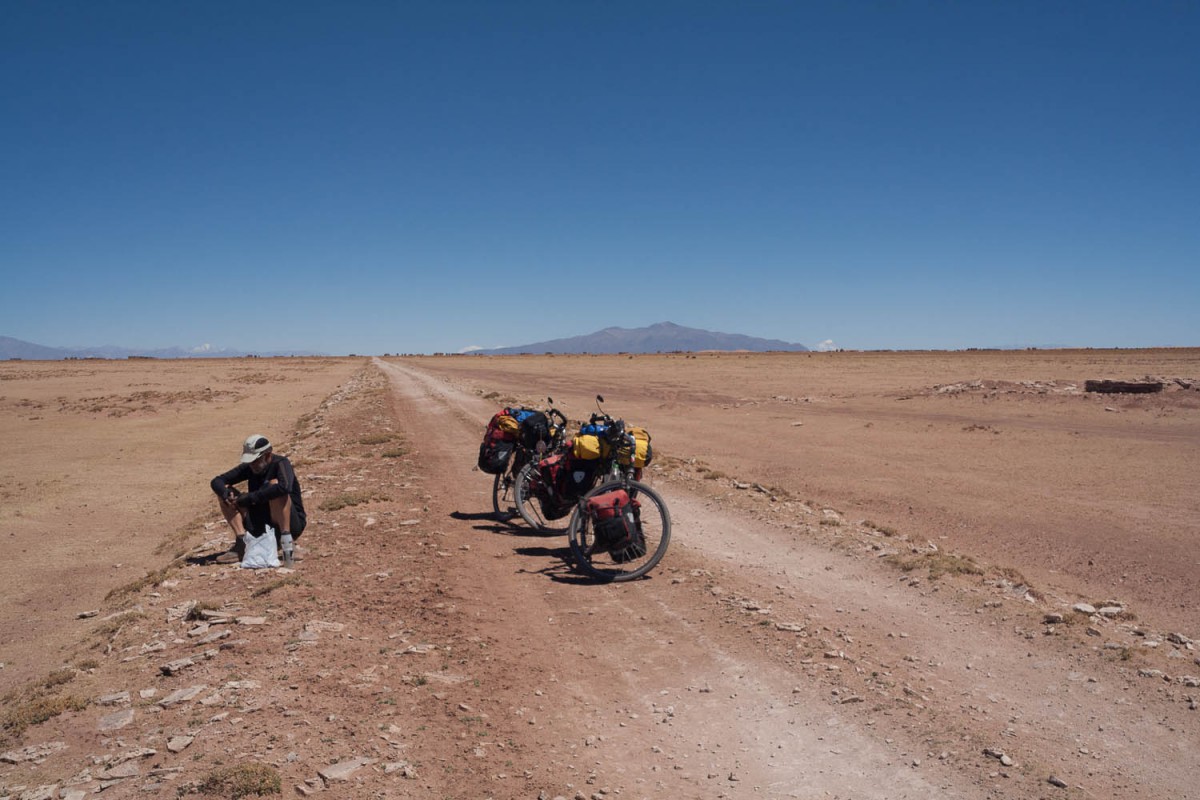 This is the better part of the Camino Chipaya

The final 6 kms to San Martin are in a bad state again. Soft and bumpy. San Martin has several shops and a hand operated water pump on the main plaza. From here a main 😉 road leads south to Salinas. It’s rough but wide and generally much easier to bike on than the Esacara – San Martin track.

Almost no traffic here. Lot’s of hills and corrugation. Even on the major road east west to Salinas the road itself only widens but does not improve. Still heavily corrugated across the entire surface with big stones and rocks all over. Great views of the Tunupa volcano and the northern outskirts of the Salar de Uyuni. 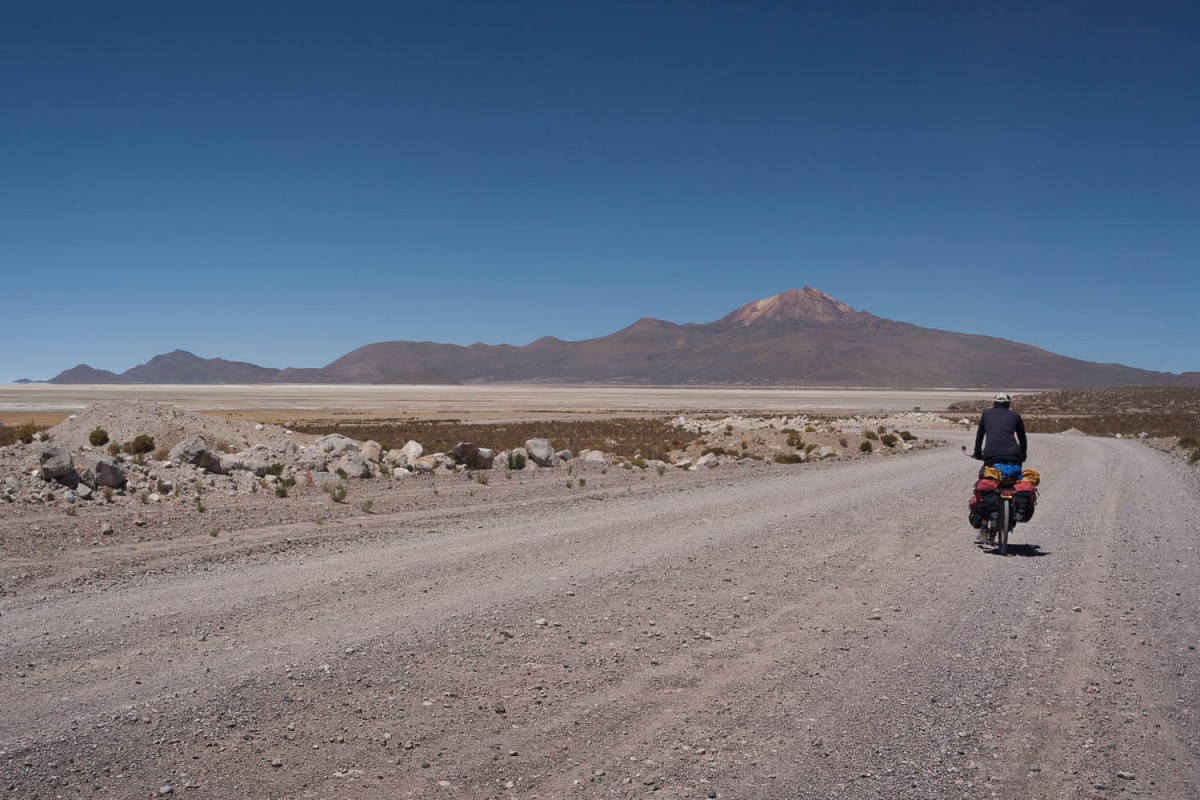 Salinas de Garci Mendoza is a small pleasant town with at least two hotels (The hotel Caman Inn is recommended) a few restaurants and plenty of shops, all located around or near the plaza.

A road leads south from Salinas and crosses the outskirts of the salar. Back on the “shore” the riding is tough again with plenty of corrugation and soft sand. A steep and stony road (a 4×4 track) leads over a pass with good views of the distant white expanse of the salar, to Jirira. There is a good hotel (Posada de Dona Lupe has good meals and hot electric showers) at Jirira but not much else. 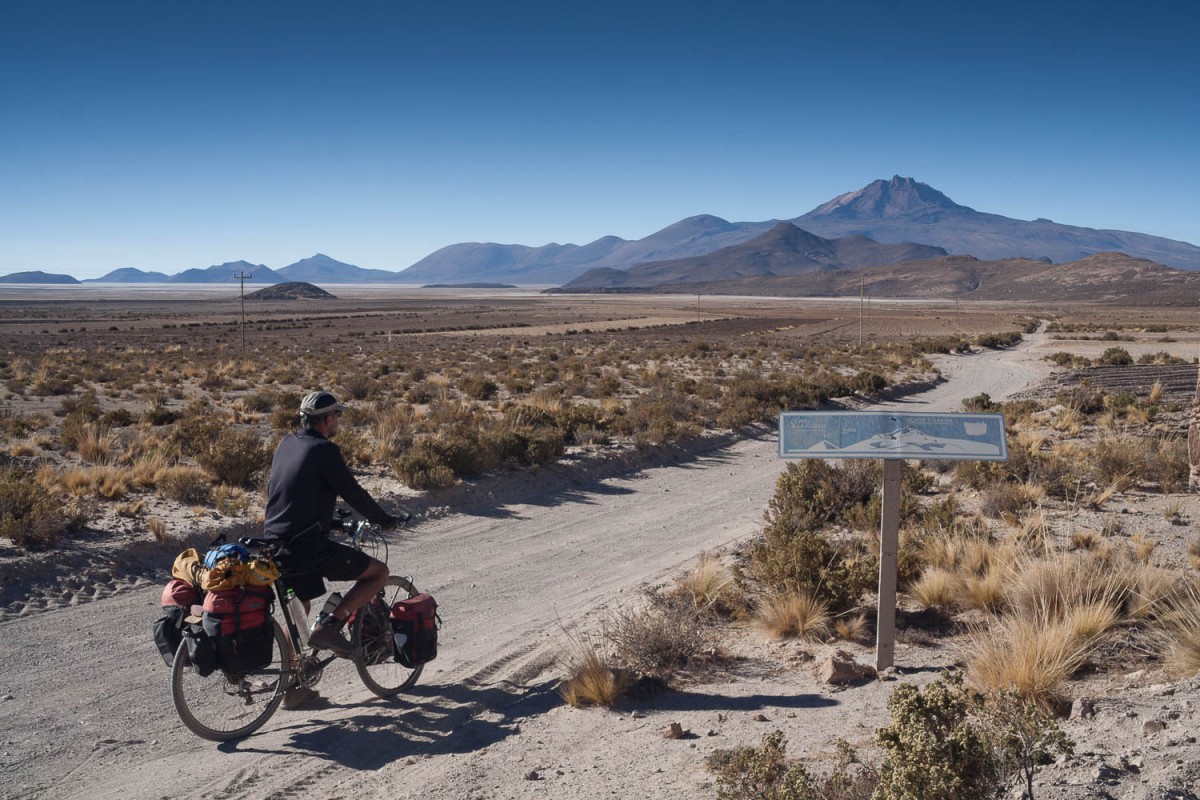 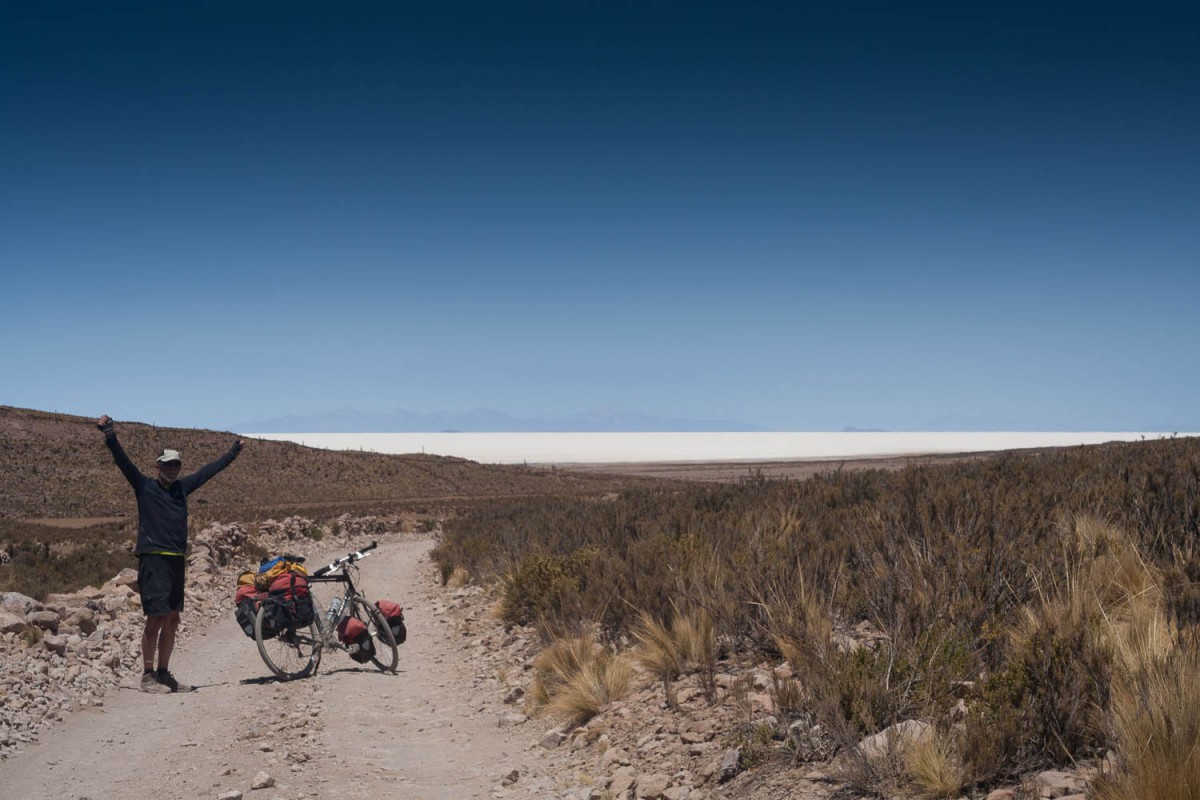 To continue to Coqueza head to the salar and avoid the road leading to it. Cycling on the salar here is easy; at Coqueza there is always some water at the edge of the salar. Two hostals here of which the Hostal Maya is best avoided. We saw one basic shop in Coqueza; no reason to go here except for the climb of the Tunupa volcano.

The salt track south to the Isla Incahuasi was very bumpy slowing us down significantly. It’s about 40 kms to the island. The Isla has a basic Refugio, a small shop, toilets (with watertap outside) and a restaurant with decent meals available all day. We camped at the quiet eastern side of the island. Be aware of the fact that the western side can become very busy in the early morning with arriving tour groups coming to view the sunrise before 6 o’ clock in the morning. 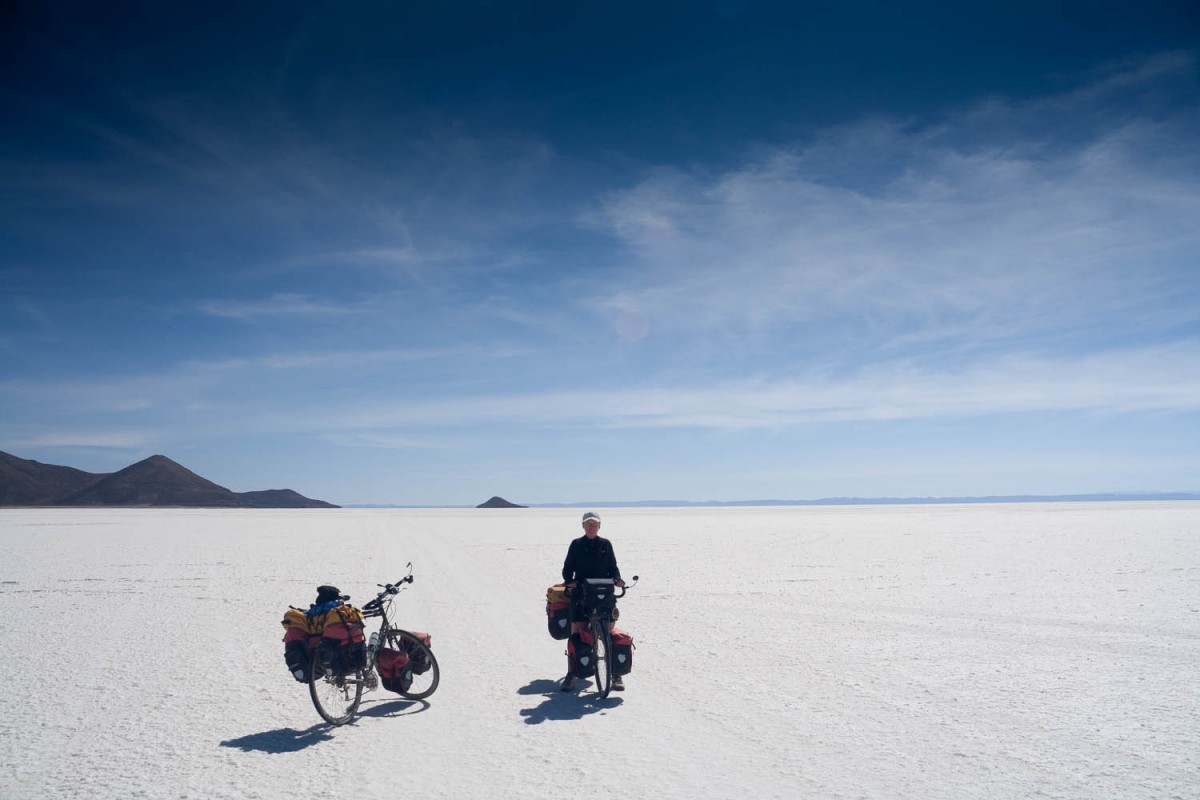 The ride east to Colchani is great. The salt is very smooth here and we were lucky to have a nice tail wind. Just follow the black tyre tracks heading east. Most jeeps with tour groups will start to appear after lunchtime. The old salt hotel Playa Blanca is a real tourist trap were everything is expensive and bored tourists hang around making silly pictures. 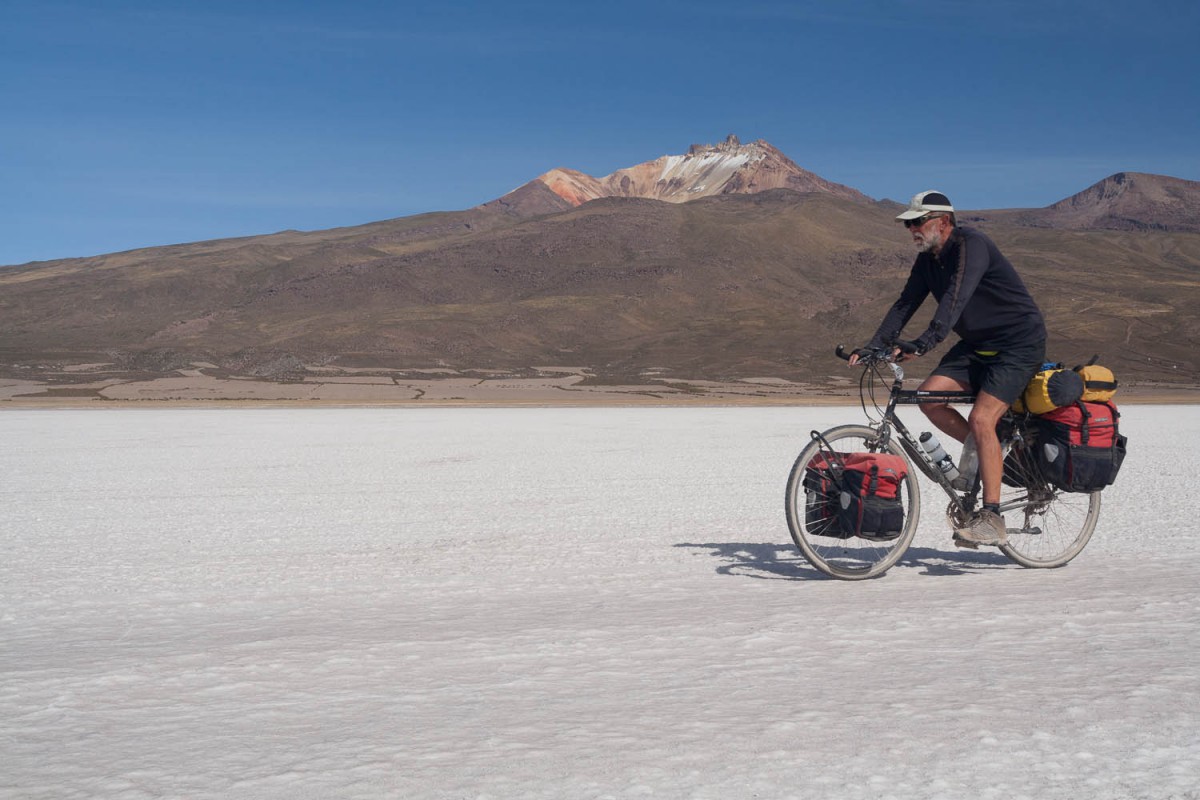 At the exit of the salar (there are saltworks here) there are several hotels under construction but none of them seemed to be open already. We continued to the Luna Salada resort a bit further north built on a hill above on the edge of the salar. Not a cheap option (at 113 USD per room) but the rooms and food are great here. Superb views of the salar for a high location. 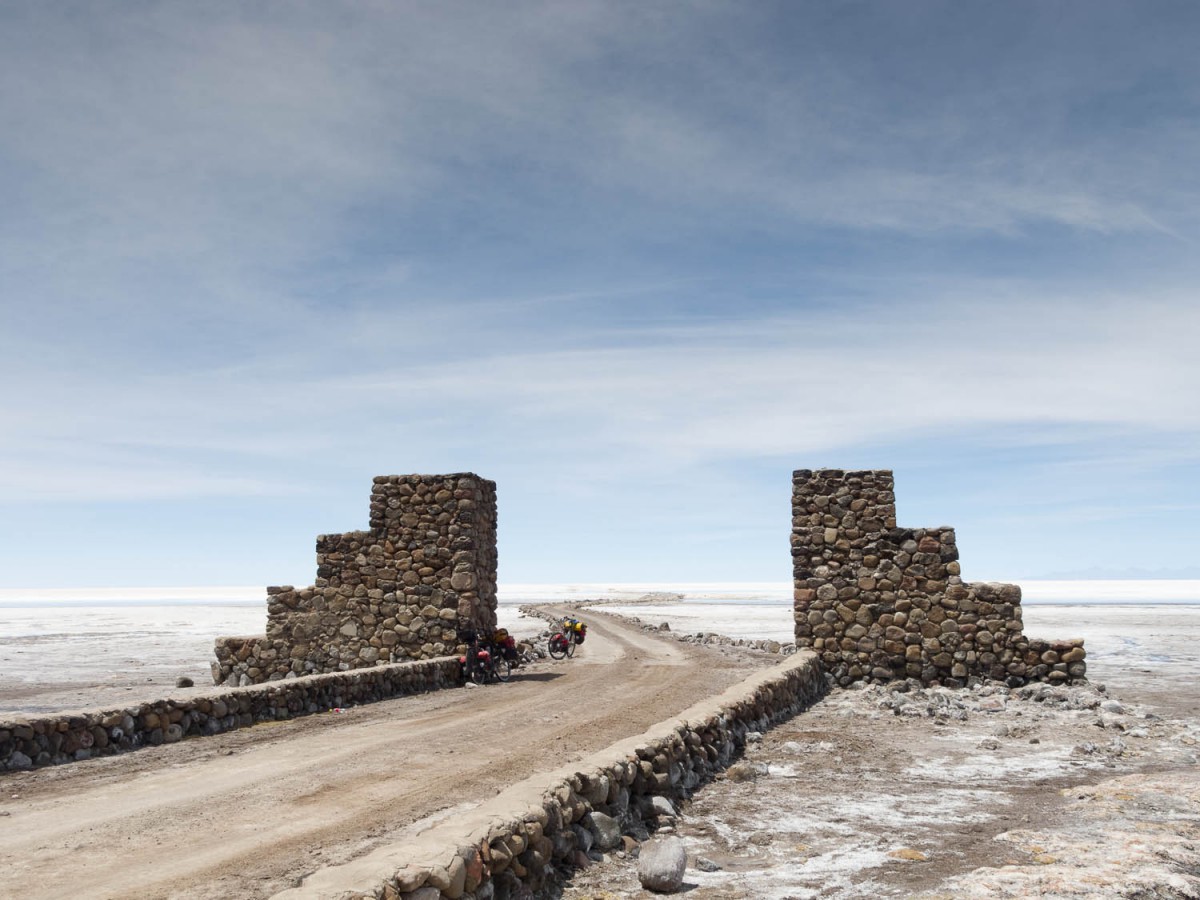 Unless you have to go there, do not continue straight to Colchani. It’s easier to follow the salar in the direction of Uyuni. This tracks avoids many kms of the awful Colchani – Uyuni road. A new road is under construction but will not be finished until 2015. Often there is an better alternative running next to the official road. Uynuni has all facilities.