All information on this page is based in our personal experiences while cycling  in California  in september and october 2010. We started in Fresno and ended in Tom’s Place in the Owens Valley (Eastern Sierra). Our initial plan was to continue to Death Valley and Las Vegas.
Due to familiy matters we had to break our journey halfway and return home. On this trip we mostly followed the Sierra Cascades bike route.  The distance covered was almost 750 kilometres.

To prepare this trip at home we used the California Map scale 1:700.000 by Freytag & Berndt. It could be used to do the actual cycling but it is rather low on detail.

For Yosemite National Park,  Kings Canyon and Sequoia National Parks we purchased the excellent  Outdoor Recreation Maps by National Geographic; scale 1:80.000. This very detailed maps show roads, elevations and relief. The maps are waterproof and tear-resistant and can also be used for hiking the trails in these parks.

In Fresno we bought a California road atlas at the REI outdoor shop. We removed the pages we did not need.

We have published our entire route as Google Map with route

We used the separate Lonely Planet guide on the Yosemite, Kings Canyon and Sequoia National parks. This guide book also has detailed information on the surrounding areas in the western and eastern Sierra.

All roads we followed  were  paved and  in good condition. Some of them had a (wide) shoulder which makes cycling more relaxed when traffic is more intense. Generally speaking drivers are considerate about cyclists and will keep plenty of distance when passing. 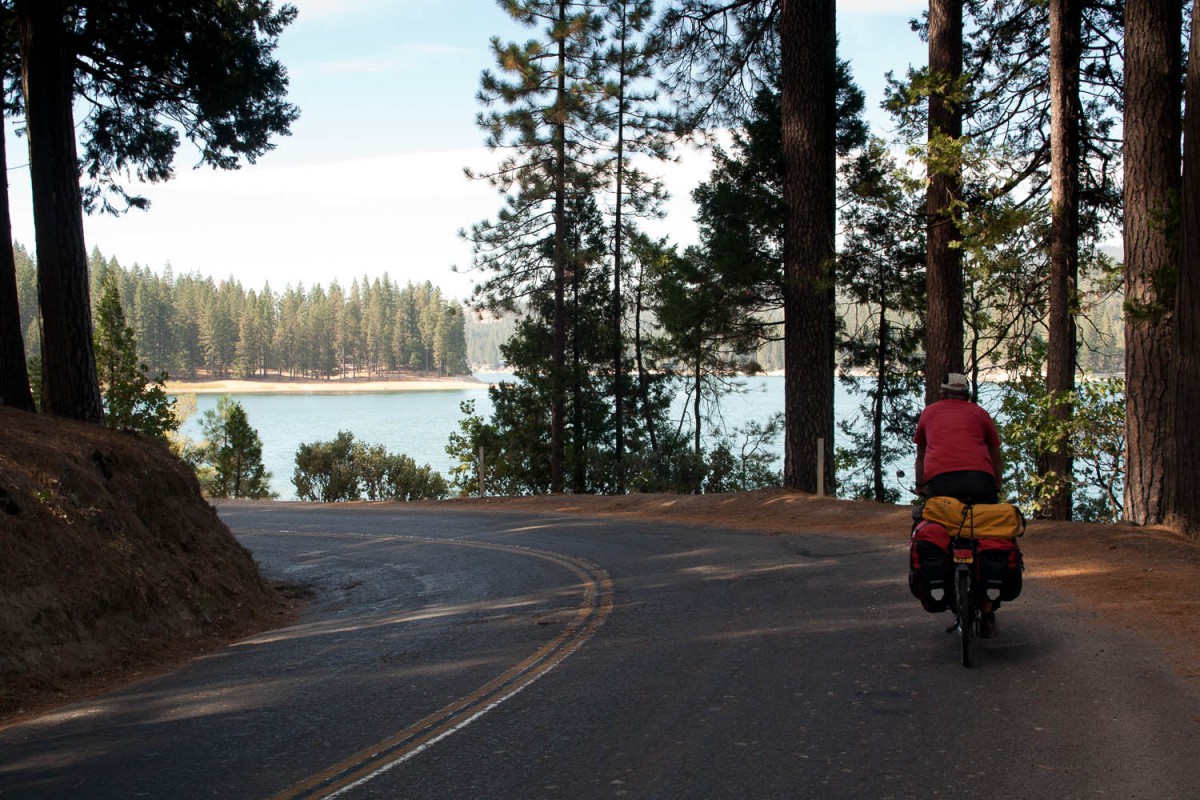 Yosemite NP has a nice network of wide bike lanes. The Fresno city  bike lanes do not interconnect as network. Google Maps has the option to show bike lanes.

On this trip Fresno is the place to get essential bike parts or repairs. Oakhurst also seems to have a bike shop. The Sierra Cascades Bike Route Map gives details on bike shops alongs it’s route.

Getting food and water along this route is no problem. There are plenty of supermarkets to stock up. Apart from Fresno we found the shops with the widest selection of food in Yosemite National Park. Tap water is safe to drink, some campgrounds in the national parks may have a water supply from a nearby stream. Boil or filter this water. 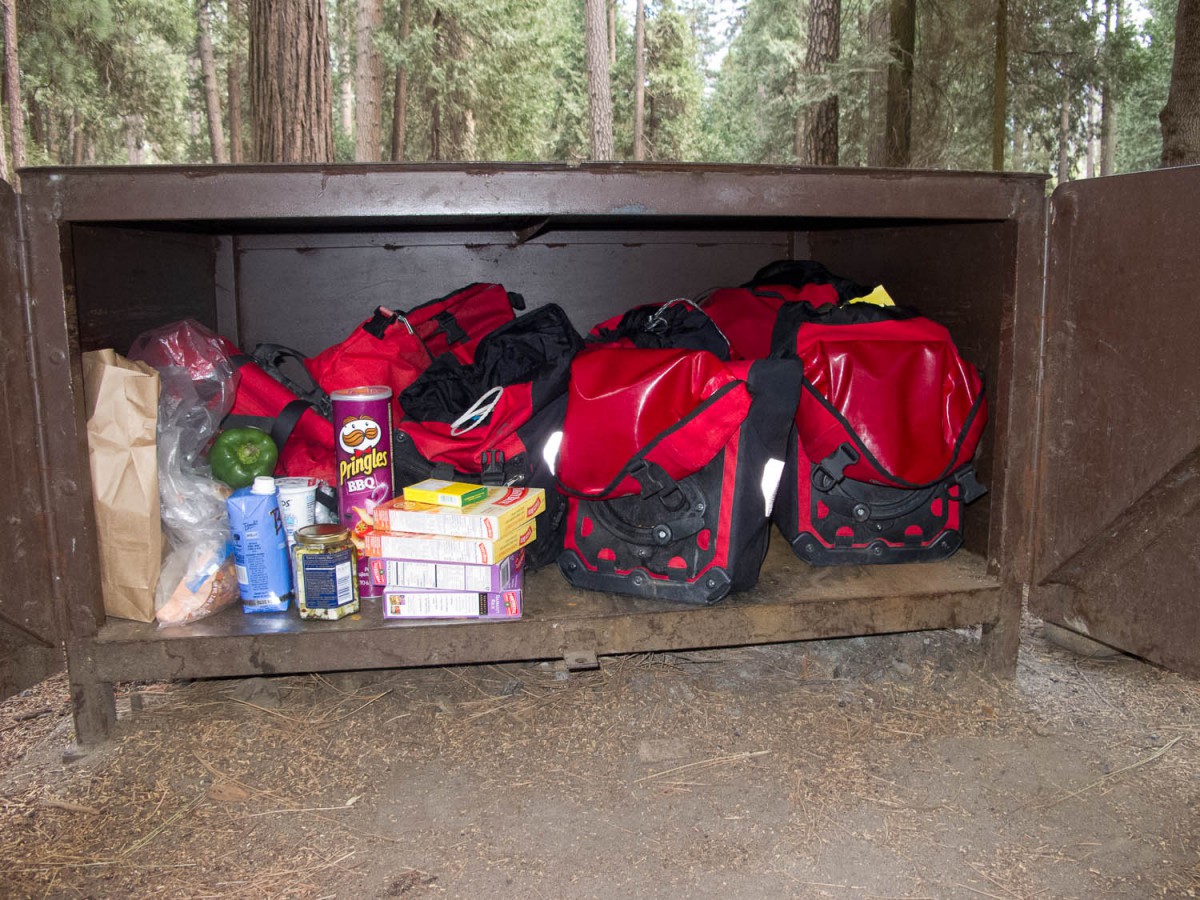 We started this trip mid September to avoid the high season and the highest temperatures. In our first week we were challenged by a heat wave hitting the western Sierra. In LA temperatures were record high (over 40˚C). Higher in the mountains it was still very hot with temperatures beyond 30 ˚C, making climbing all these slopes much tougher. 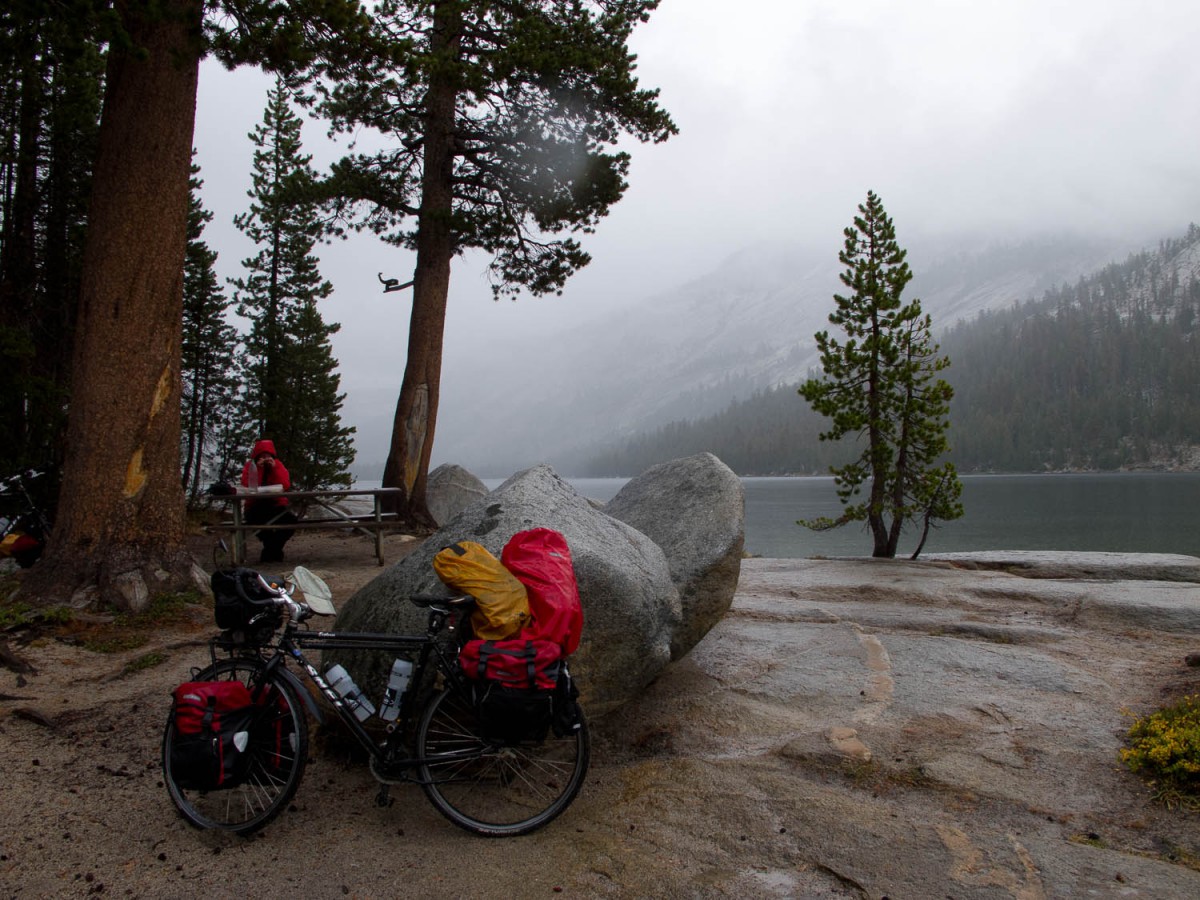 When we got to Yosemite NP a cold front hit the eastern Sierra. Temperatures plummeted to 5-10˚C with lots of rain. On our final days we even had some snow. The Tioga Pass was closed for a few days just after we crossed it.

Depending on the distance you can travel in one day, most of this trip could be done staying in motels. The possibility to camp increases your flexibility. Please keep in mind that many accommodations start closing from the beginning of September (Labour Day). The high season in Yosemite NP seems to last until at least November. 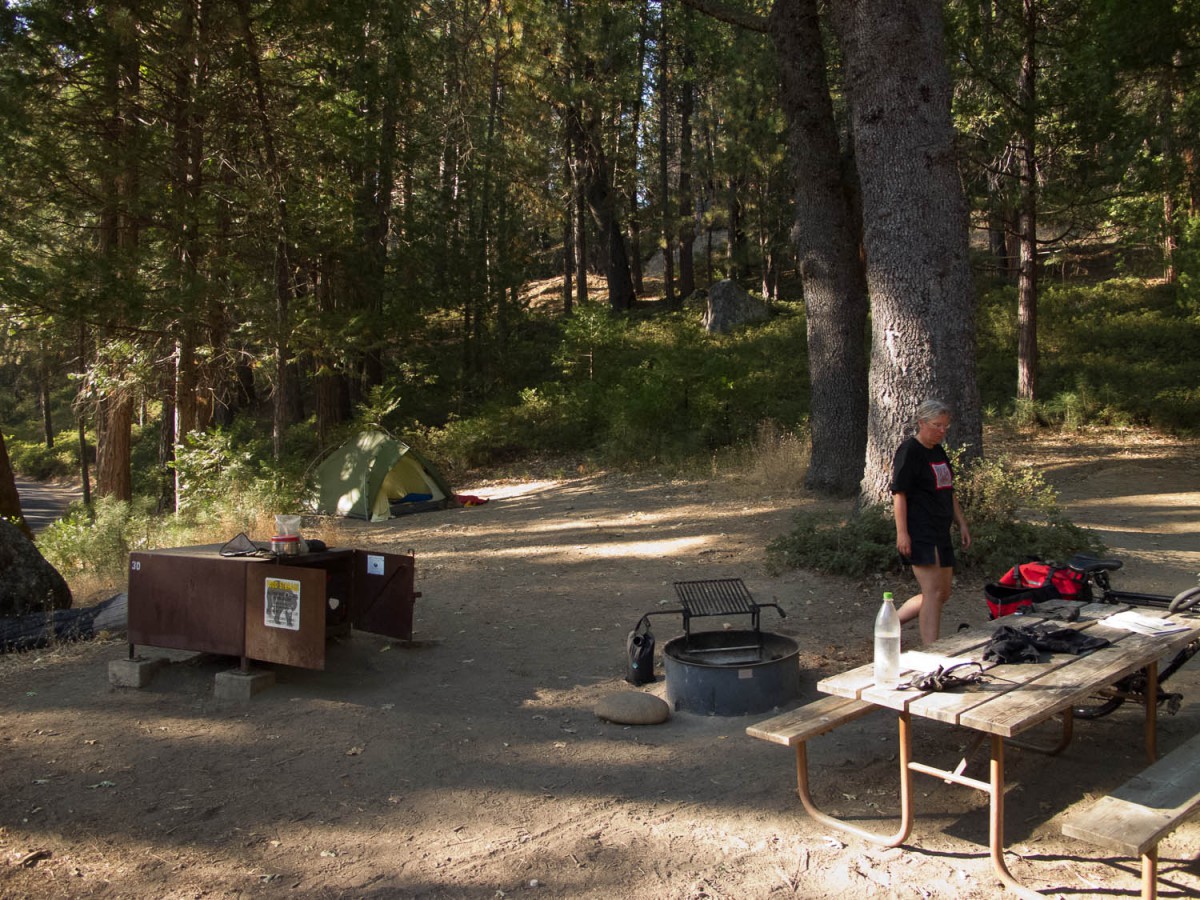 Getting a campsite without reservation in Yosemite can be a real problem. We did not have any reservations and all campgrounds on the valley floor where full. This means you must apply for the waiting list and wait until 15.00 hour each day to hear whether a spot is available or not. We stayed two nights and got a site both nights.  The campgrounds in the Yosemite Valley are not a great place to stay: cramped and crowded most of  the time. Outside the valley sites were more easily available.

Travelling to or from Yosmite tou can use the YARTS bus service. The service is available from Mariposa, Merced, and Mono counties. It’s allowed to take your bike on the bus. However, in some cases, space is limited. Check with the driver as to space availability. 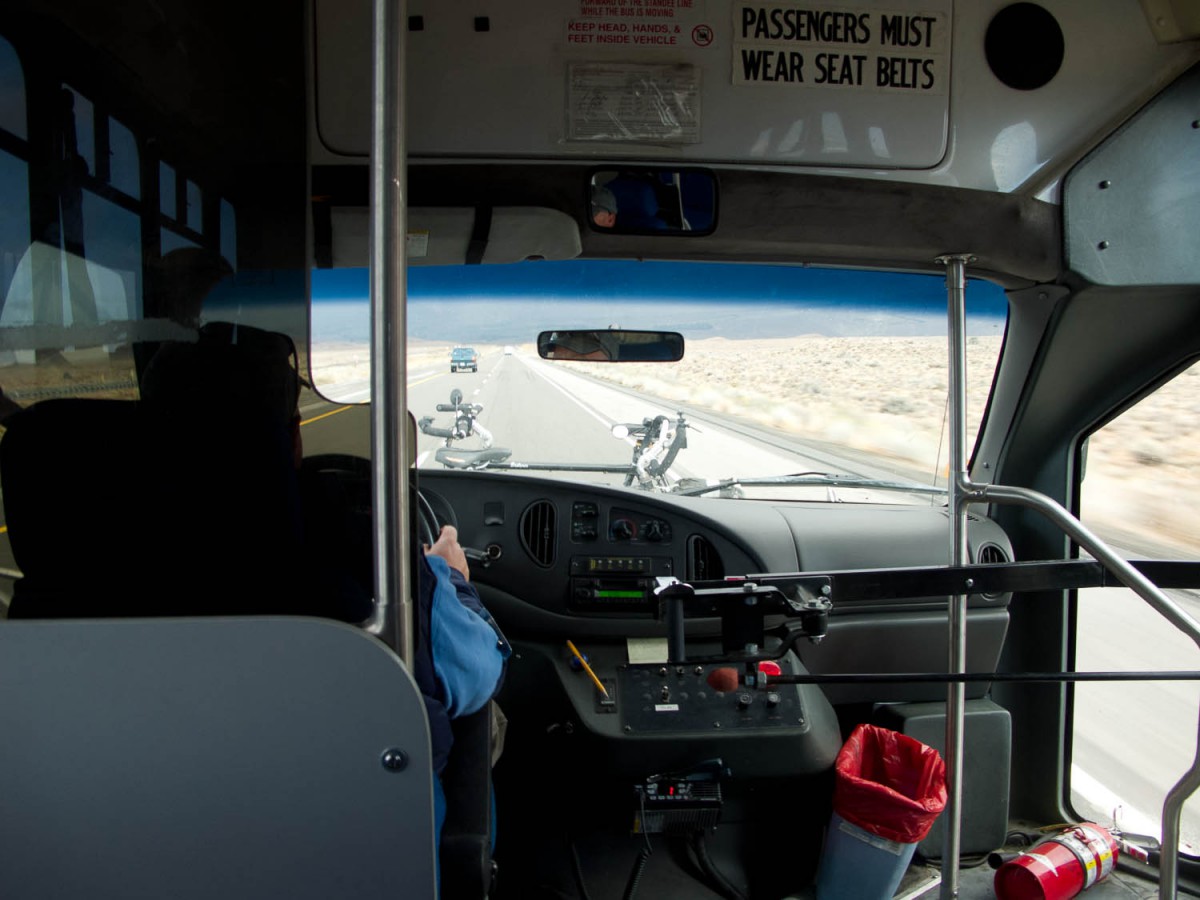 In the eastern Sierra the ESTA (Eastern Sierra Transit Authority) provides public bus services throughout Inyo and Mono Counties. All their buses have a bike rack to carry two bicycles. We used it from Tom’s Place to Bishop. They operate in the Mammoth, Lone Pine and Pahrump triangle.