Our route in Cuba

Cuba: introduction to our route

In March and April we  cycled 4 weeks in west- en central Cuba. Starting from Havana we biked to Viñales and Pinar del Rio. Then travelling east again to Soroa, San Antonio de los Baños to reach the south coast at Playa Giron. From there we  continued to Cienfuegos and Trinidad. From Trinidad it was back again to Havana via Sancti Spiritus, Santa Clara, Colon and the beaches of Varadero. We cycled some 1400 kilometers. This page provides a detailed description of this route.

Our cycling route around Cuba, including the places we stayed,  can be viewed in detail on Google Maps 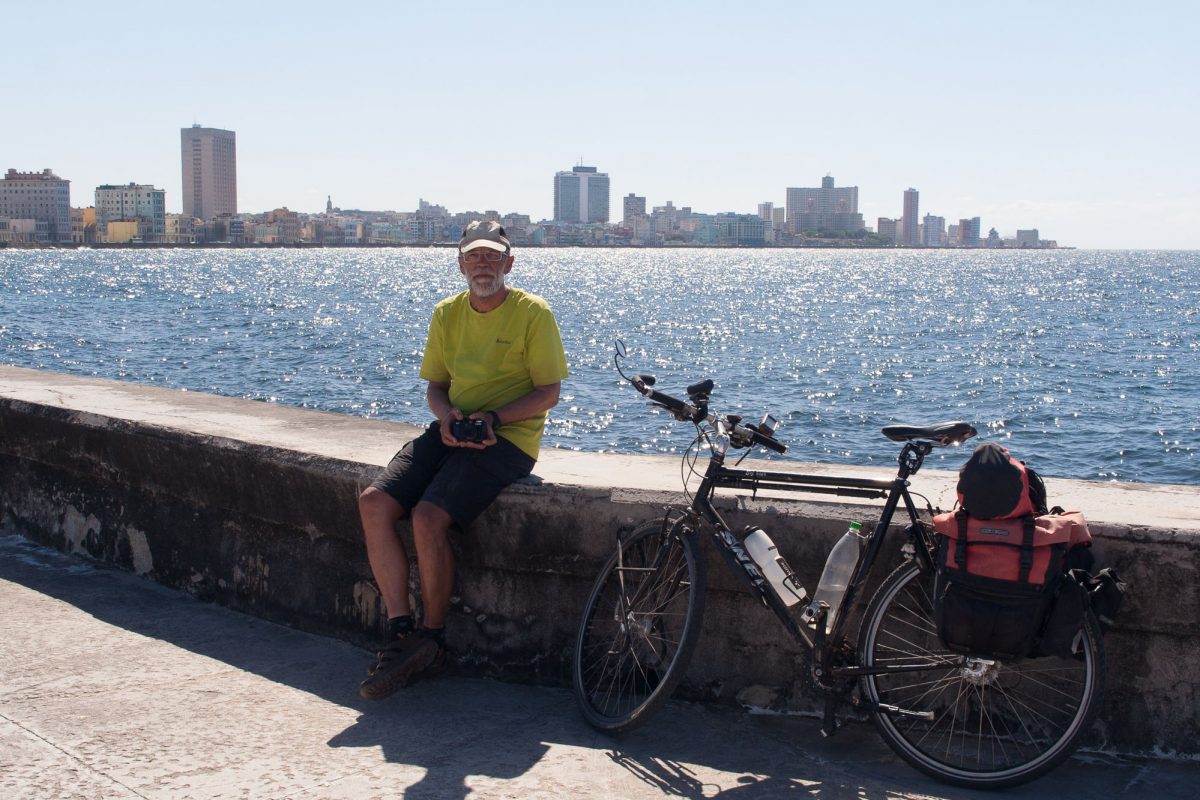 Taking a break on the Malecon: Havana’s seaside boulevard

Cycling out of Cuba’s capital city, Havana, was surprisingly easy. We just followed the Malecon boulevard and then mainly followed Avenida 31.  At the edge of the city is the unmarked junction with the old road to Mariel. There is hardly any traffic here and the bumpy road gradually becomes very narrow because it’s partly overgrown. No villages or any services along this stretch. The road reaches Mariel just 1,5 km south of the village. There are at least 4 ‘casa particulares’ here.

the less used road from Havana to Mariel

After a  pleasant night sleep we continued to Bahia Honda. The village of Cabañas is the largest town on this day. There is one casa this village. From Cabañas the road follows a ridge providing views to both the distant ocean and the hills south. Very few cars and other traffic here. Bahia Honda has several casas to choose from. Beyond Bahia Honda is Palma Rubia where there is also some accommodation.

The first 20 kms out of Bahia Honda are very bumpy. After La Palma the road improves.  Las Pozas has several shops and a bakery.  Moderate climbing starts after La Palma and soon the first signs of “Renta Habitaciones” will appear as you are approaching very touristy Viñales.  With the proximity of this town traffic increases.

From Viñales we decided to take a detour to see more of the area. The road to Pons and then south to Cabezas is very quiet and of surprisingly good quality. It offers some nice views of the typical Valle de Viñales ‘mojotes’ as well. After Cabezas there is some climbing followed by a nice descent to Pinar del Rio. In Pinar is plenty of accommodation: much more than listed in the Lonely Planet travel guide we used. 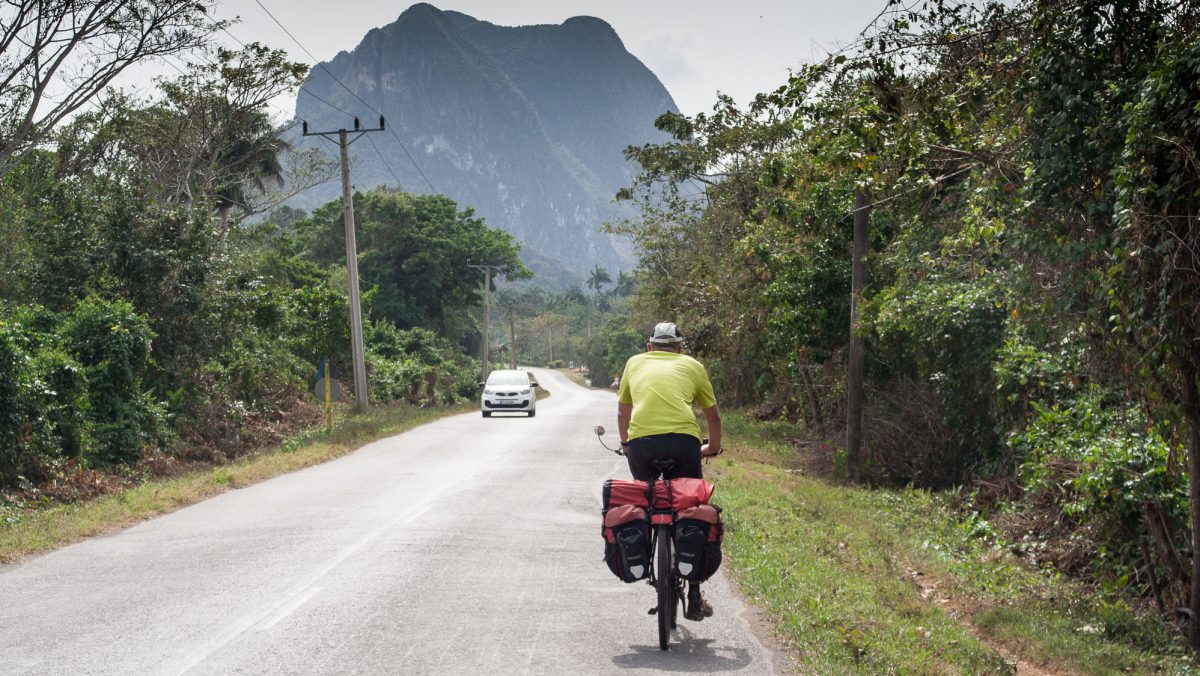 To get to our next stop San Diego de los Baños we followed the Carretera Central east. This main road is very quiet as soon as you leave Pinar del Rio behind.  Beyond Herredura Junction it gets even quieter and soon you’ll roll into San Diego. There are hotels and at least two casas.

The ride further east was rather uneventful. Approaching Soroa the first casas appear shortly after the junction with the Carretera Central. The climb into the hills, just after Soroa village, is a very steep one.

This part was four days of cycling without  touristic highlights, including a long 100 km day along the Autopista on a very hot day.

Riding out of Soroa our first destination for the day was San Antonio de los Baños. Through Artemisa, Las Cañas and Alquizar we followed mostly quiet roads. There are many small sleepy villages along this road. San Antonio itself isn’t very interesting; the large Hotel Las Yagrumas is at the edge of town.

Navigating by GPS and Open Streetmap we were able to follow small country roads to shortcut to Becujal. From Becujal the main road east carries much more traffic and has two ‘big’ hills.  Just before Güines is the last hill ‘Loma la Candela’ with a restaurant on the top. Güines has at least 4 casas (in one street) but most of them have no signs outside.

A long day on the Autopista followed to get to Jaguey Grande, the next town of some size. The highway has no less than three lanes plus a wide shoulder. On Sunday traffic was very light. There was only one petrolstation and a restaurant until we  got to the junction to Jaguey Grande. The restaurant on this junction has a friendly lady running some sort of tourist information desk. There are at least 3 casas in Jaguey Grande and there is some accommodation south towards Australia and beyond.

A quiet road leads to Playa Larga (30 kms) with plenty of accommodation and shops. Then again it’s approx. 30 kms to Playa Giron with again many casas. 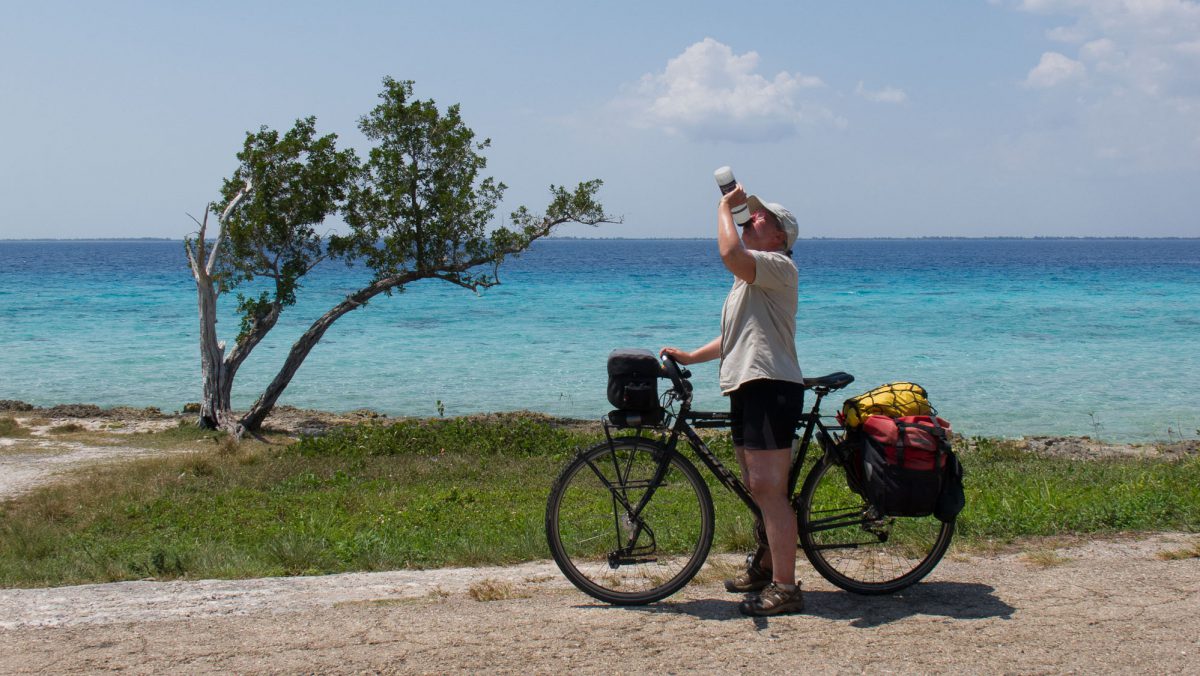 On approaching Playa Giron there are huge billboards about the Bay of Pigs invasion and several monuments commemorating this historic battle.

Leave Playa Giron on a northern and very quiet road that leads through Horquita (small shops, cold drinks) to  Yaguaramas. Here a new road to Cienfuegos starts. It’s a very good road but unfortunately there is much more traffic, the speed limit is 90 km p/h and the road contains no shoulder. Not the much wanted relaxed Cuban Cycling Experience. Closer to Cienfuegos the road widens to 2 lanes and finally you reach Cienfuegos’ main drag the Prado. There are countless casas along this road.

Travelling to Trinidad you can choose from two options: the more northern road to the Jardin Botanico and the beach road that reaches the main Trinidad road 2 kms south of the Jardin Botanico. As usual in Cuban towns the signposting in Cienfuegos is not very good.

We stayed one night in Villa Guajimico  (a resort with rooms in small bungalows on the seaside).

Our trip coincided with the annual crab migration. We were amazed by the enourmous amount of crabs.  It’s impossible to avoid all of them. Watch our for punctures: we met a taxi driver who had had already three punctures due to crabs that in defense put their claws in the car tires. 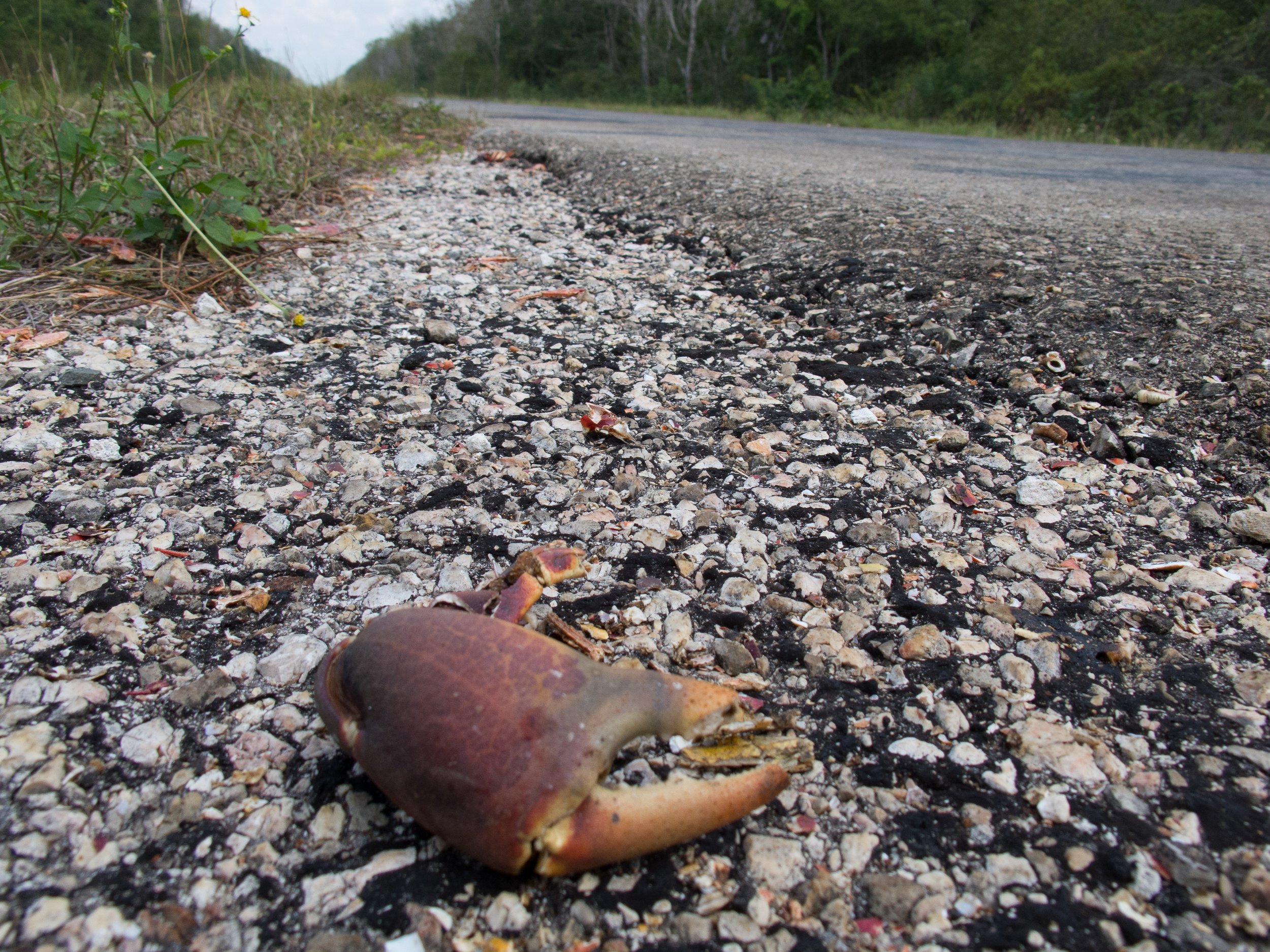 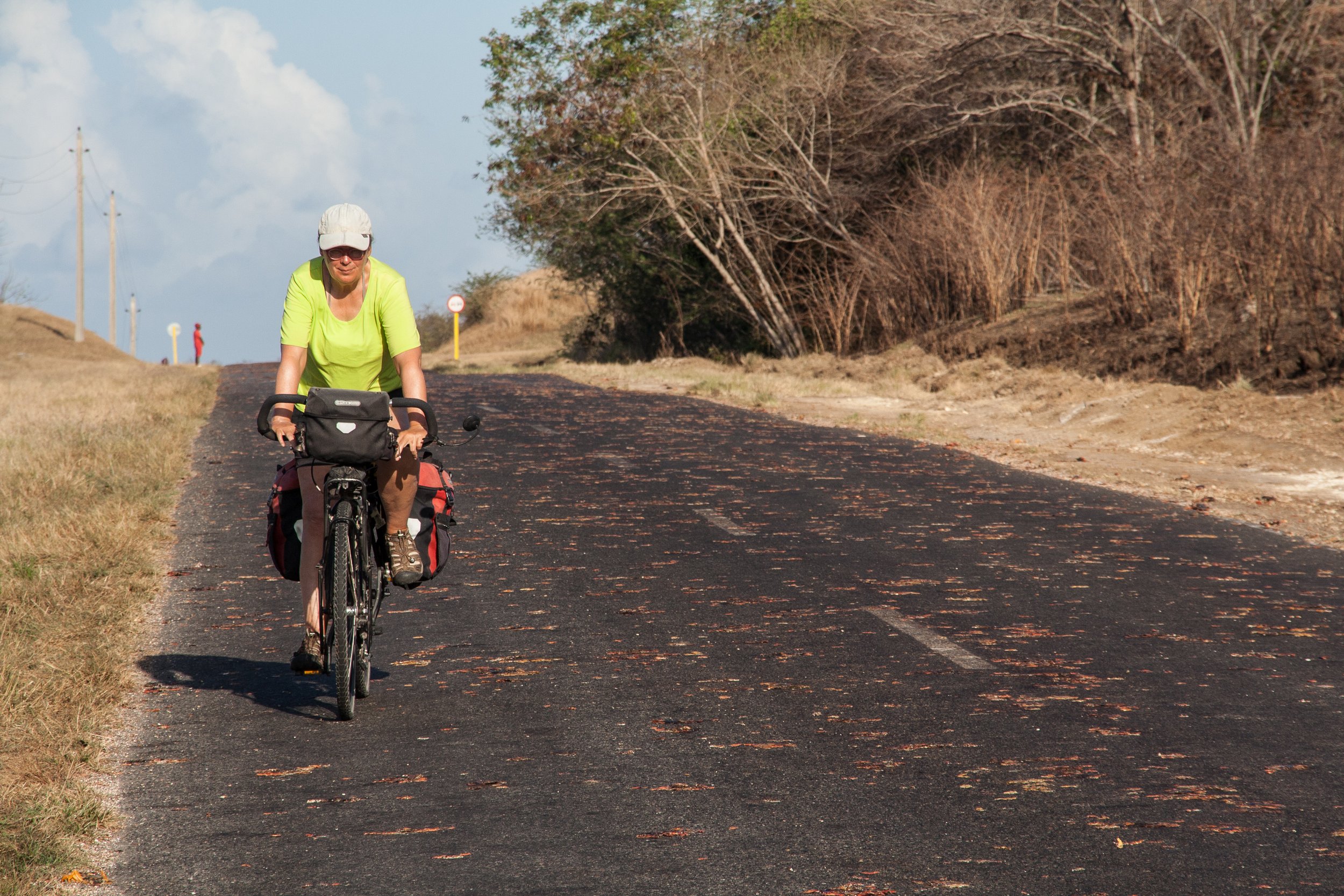 The road continues along the coast and is rather hilly. Trinidad is situated on a hill and the cobble stone streets in the ancient city centre are very hard to bike around ;-). 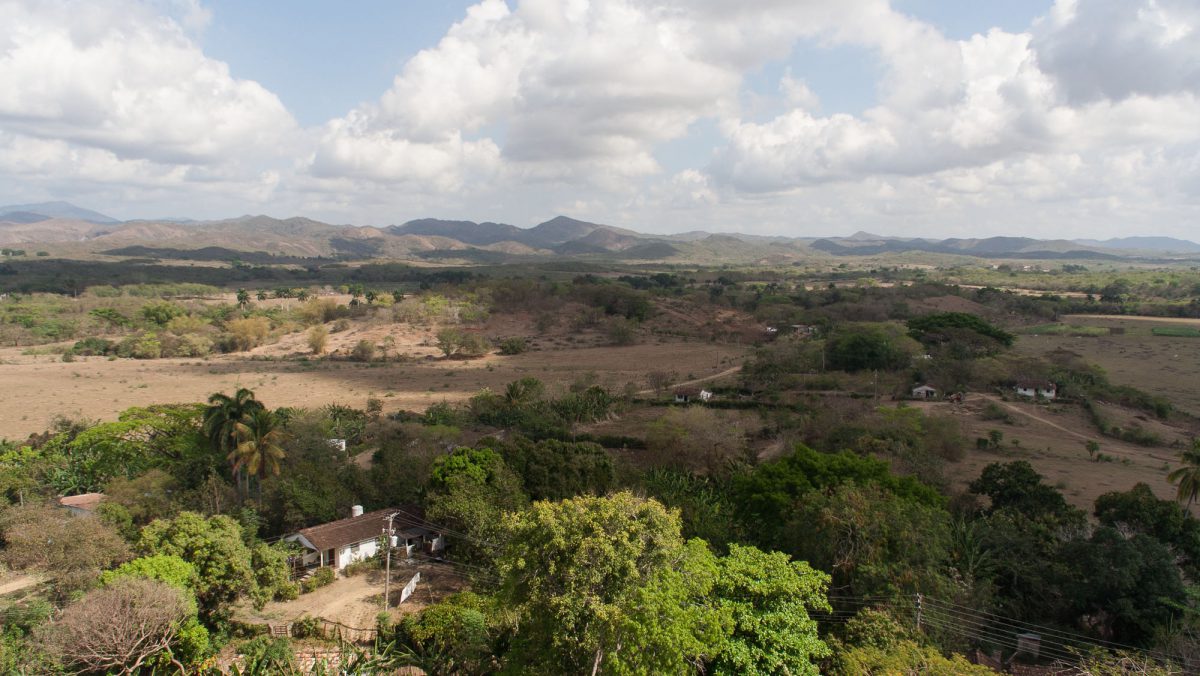 We had enough time to make some extra miles and decided to cycle to Santa Clara through Sancti Spiritus. In a hurry? It’s possible to shortcut directly through the mountains north of Trinidad to Santa Clara. A lot of very steep climbs await you in that case; this road is part of the Vuelta de Cuba annual bike race.

Just outside Trinidad is a nice viewpoint (Mirador) with good views of the valley. Official (?) Parqueadores Estatales will guard your bike and may want  some small change for this. Another 15 kms further east you’ll find old sugar plantations and factories in de Valle de los Ingenios. These 15 kms are very busy with tourist cars, taxis and buses. After Iznaca most traffic disapears.  There aren’t a lot of villages along this road. A long descent will finally roll you into Sancti Spiritus. A nice town, amazingly quiet after tourist overrun Trinidad.

The first kms to Cabaiguan are very busy with cars and lot’s of trucks. Once you cross the Autopista all traffic is gone.  At Placetas there are plenty of shops and even the crumbling Hotel Placetas.  Close to the Embalse Minerva (a lake) there are several hostals (maybe for Cubans only).  Falcon has a small shop selling cold drinks. 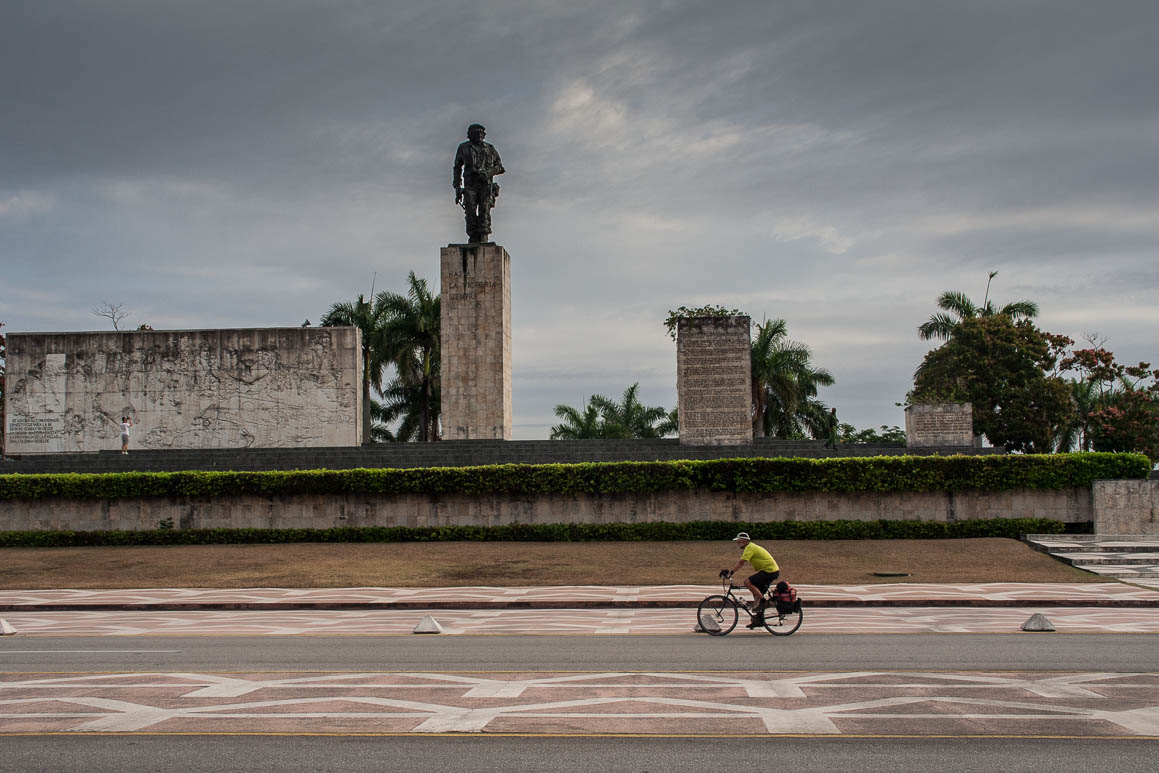 Santa Clara’s main road (the Carretera Central) is forbidden for cyclists but we ignored this. The next town is Colon. It’s 115 kilometers away, a very long ride on a hot Cuban day.  The pancake flat road to Colon was ‘busy’ in the morning but almost deserted in the afternoon. We spotted no accommodation in the small towns along this road. Colon has at least one legal casa (see our map). There may be more.

Again a flat route leading mostly through endless sugar cane plantations. Beyond the dusty town of Cardeñas the road widens and traffic increases enormously. Varadero has a huge number of hotels and casas to offer but finding one with vacancies wasn’t easy. The further west and the further away from the beach the better your chances are. 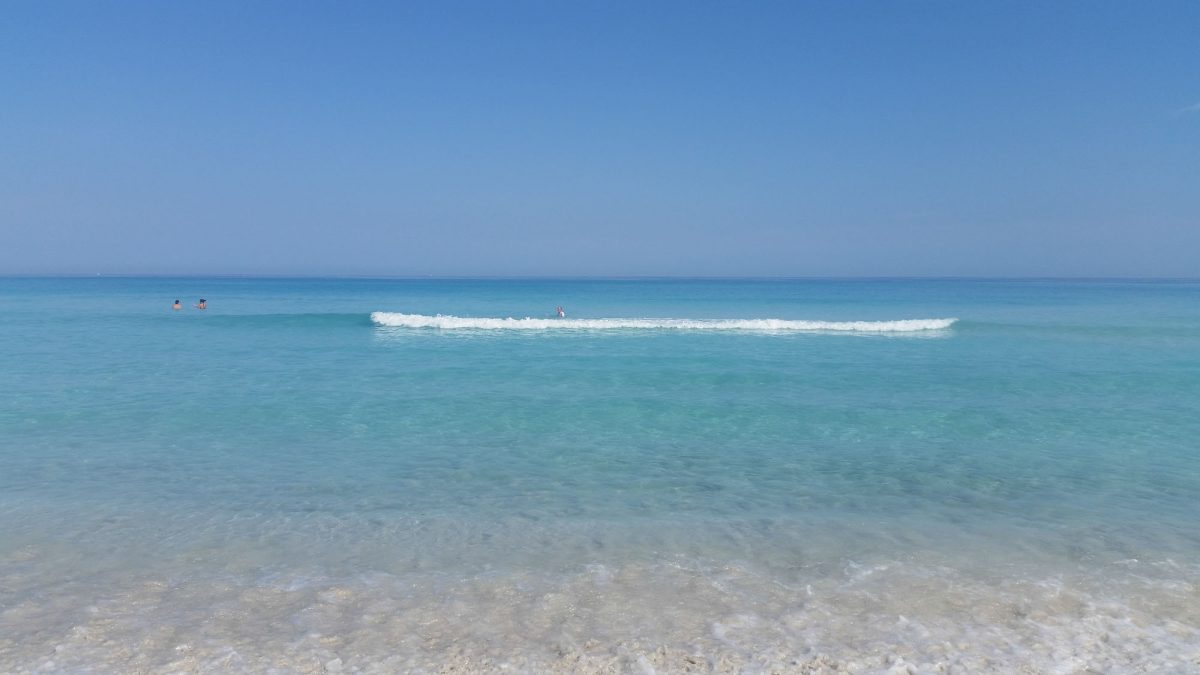 Varadero: the beach is the main attraction

The road to Havana is busy but wide. 18 kms beyond Varadero you’ll meet a ‘forbidden for cyclists’ sign. The excellent alternative is the old road to Playa Coral. Quiet and relaxed cycling far away from the traffic noise. 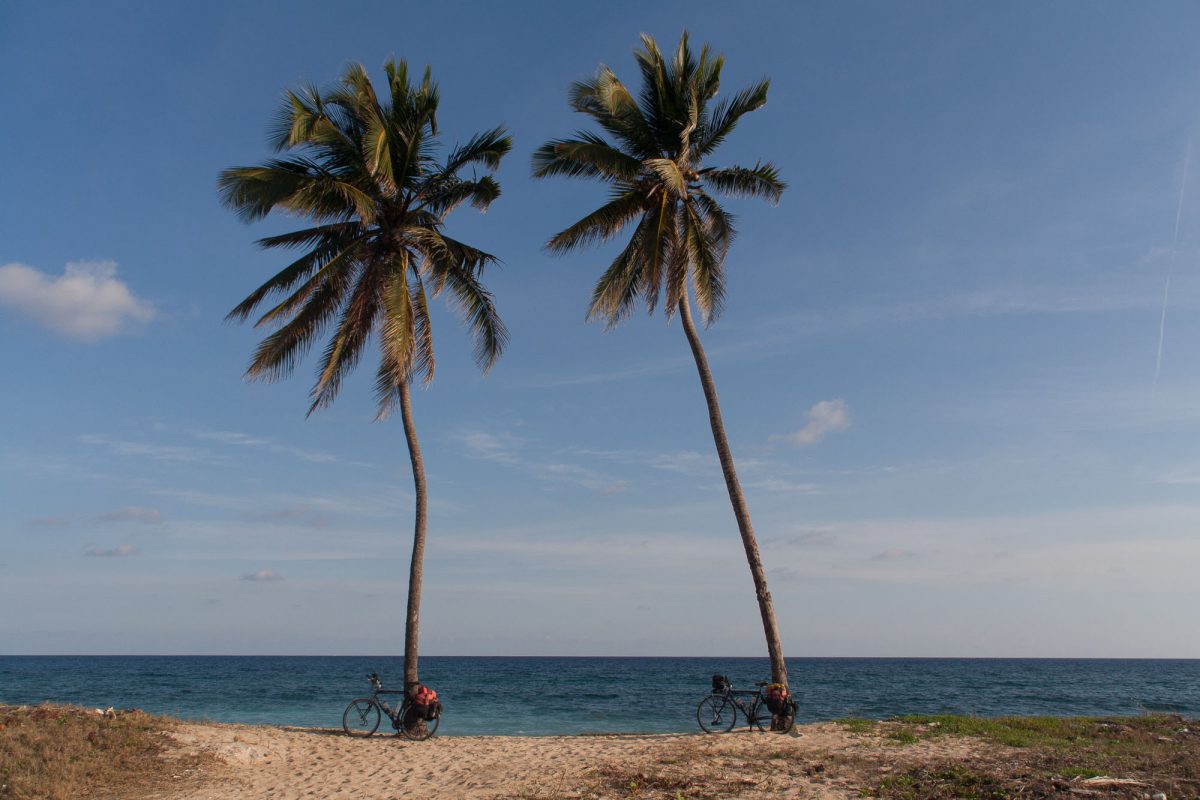 Matanzas city is busy but easy to cross. Beyond Matanzas the traffic flow decreases. The two lane highway is wide enough. The cycling is easy with views from a distant ocean. The turn off  to Playa Jibacoa is clearly signposted. There are several basic ‘campismos’ here and two luxury (all-inclusive style) hotels.

Closer to Havana the traffic increases. Once you pass through Ganaboa you can cycle on the shoulder to get away from the speeding traffic. 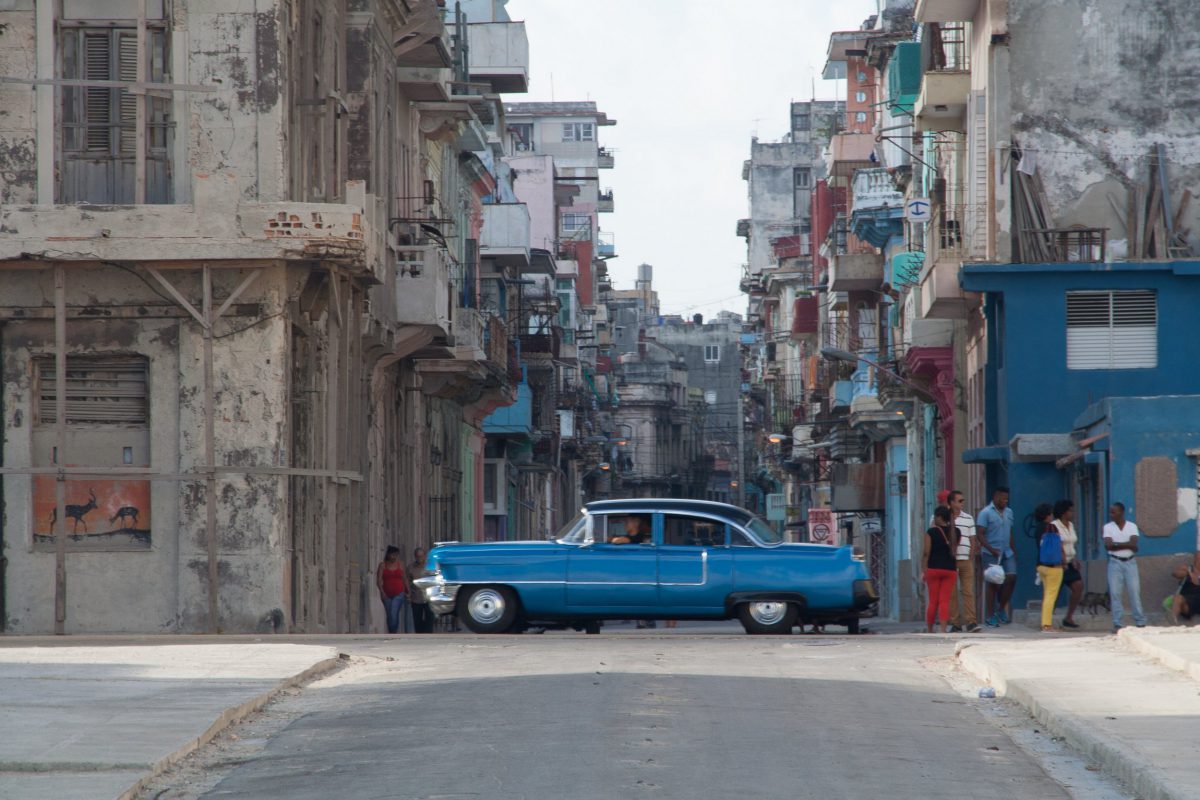 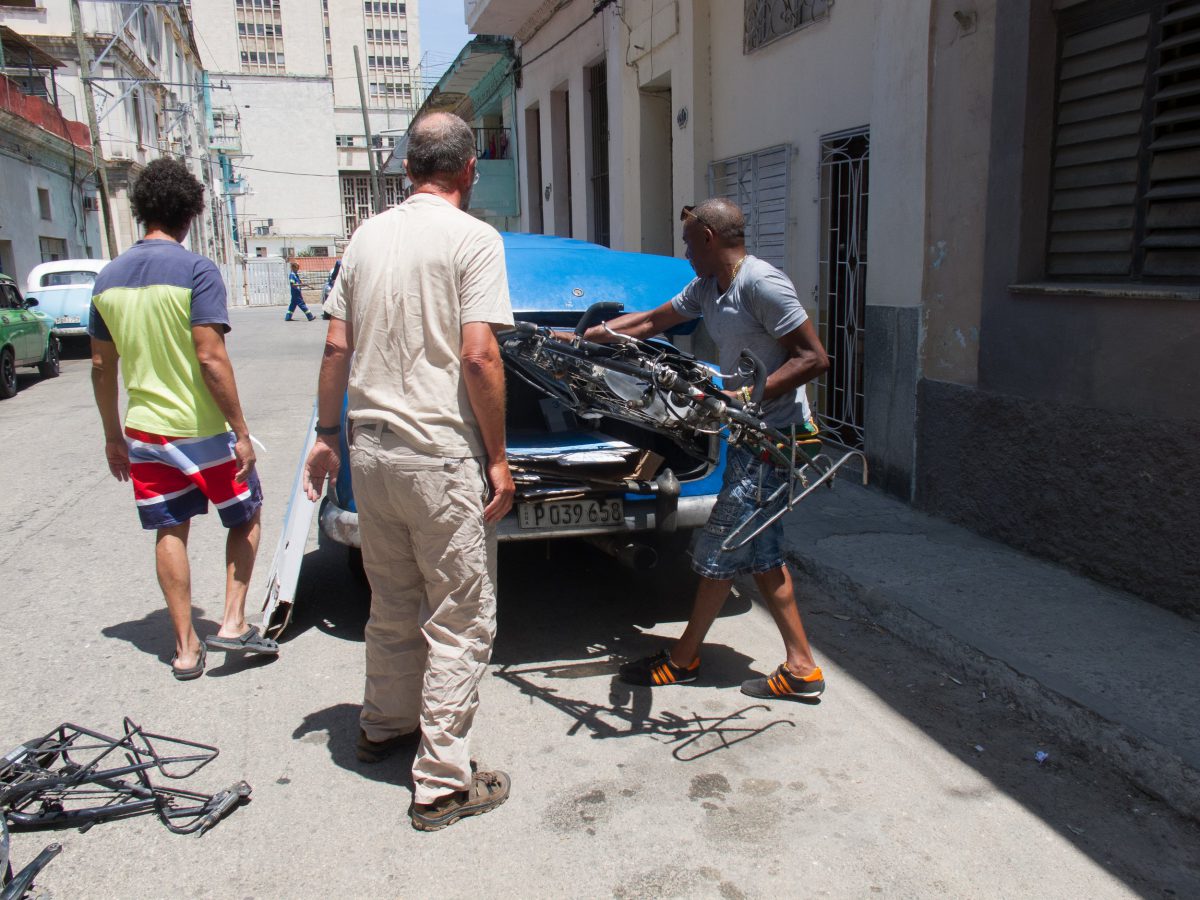 to the airport: bicycles in an oldtimer