In November 1998 we cycled around Central Myanmar; including highlights as Bagan, Mandalay and Pindaya in our itinerary. On this page you will find a description of the route we followed and all practical info (accommodation, maps, food etc.) regarding this trip.

Along all main roads and in major towns white on green road signs in both Burmese and roman script will show you the way. In between towns road signs are mostly in Burmese only. Almost every village will have a small black in yellow signpost giving the names of the previous and next village on the road, often with distances.

We used the Nelles Verlag map of Myanmar; scale 1 : 1.500.000. This map shows the correct names of towns but unfortunately doesn’t contain any distances.

As you’ll find out reading these ‘Cycling in Myanmar’ pages, main roads displayed on this map are not always main roads. They can just as well be unsurfaced oxcart tracks.

Asking directions can be a another challenge. Burmese is a tonal language. When asking directions to a certain town we always had to repeat it several times before somebody got an idea of where we wanted to go. As in many other Asian countries, do not rely on one single person. Always check and double check. The people in Myanmar are very friendly and may answer to please you.  Ask ‘Where is to road to Kyaukse..?’ rather than ‘Is this the road to Kyaukse..?’.

Very useful free maps of Yangon, Bagan and Mandaly are available at the airport. All distances are measured in miles.

Books and other info

We used the well known Lonely Planet guide. The Lonely Planet Burmese Phrase Book is another useful addition to your travel library. We found it very essential when communicating with the locals. English is certainly not widely spoken. A picture-dictionary, like ‘Point It’, was also very useful.

To get a good impression of colonial Burma,  read George Orwell’s ‘Burmese Days’. It’s widely available in Myanmar and can be bought in many souvenir shops.

Be prepared for narrow and bumpy roads. Only on the main north-south highway cars can pass without getting of the road. Drivers are very considerate with cyclists. Unsurfaced roads can be in an extreme state of disrepair, making cycling almost impossible and at its best very slow.

Traffic is on the right hand side of the road. 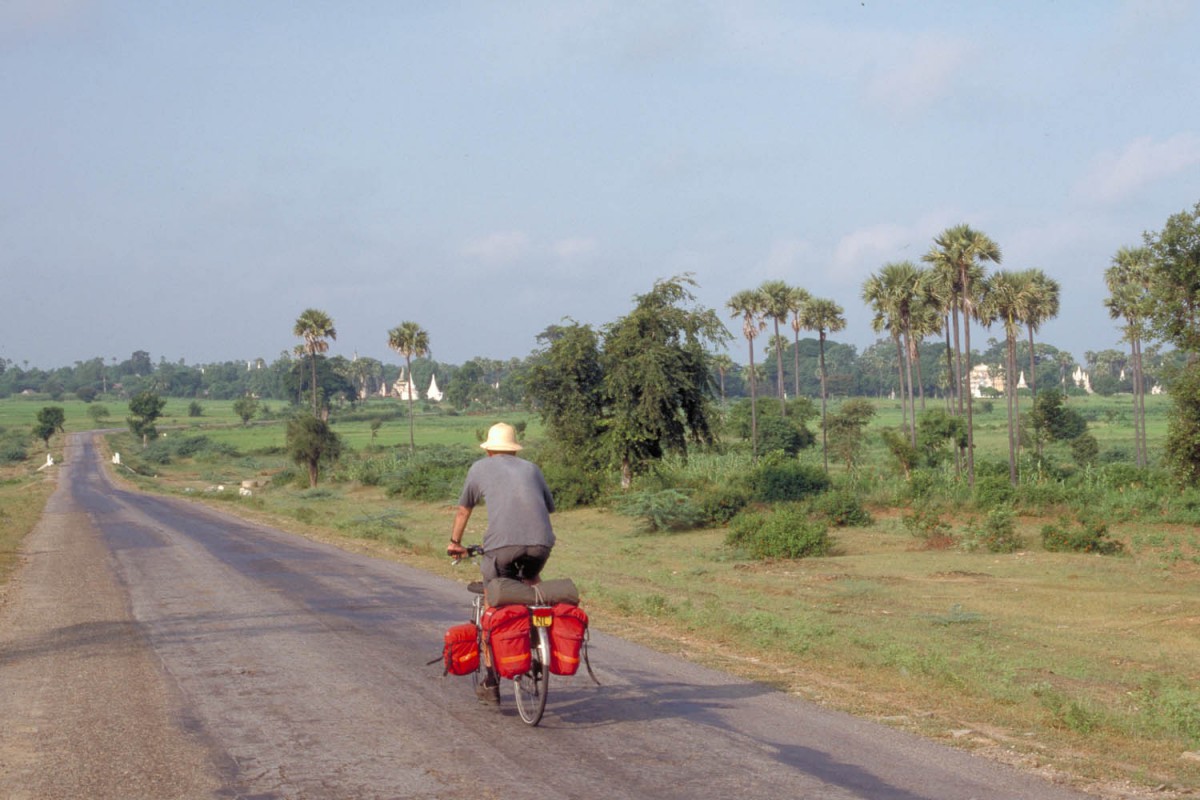 Bring all you may need. Plenty of bike shops in every village but they can only handle heavy one-speed bikes. The rough roads can be very hard on your bike so check everything before leaving.

Just before Kalaw the freewheel in one of our bikes broke. A small bike shop in Kalaw managed to repair it somehow for 100 Kyat. Unfortunately ik broke again after another 35 kms. 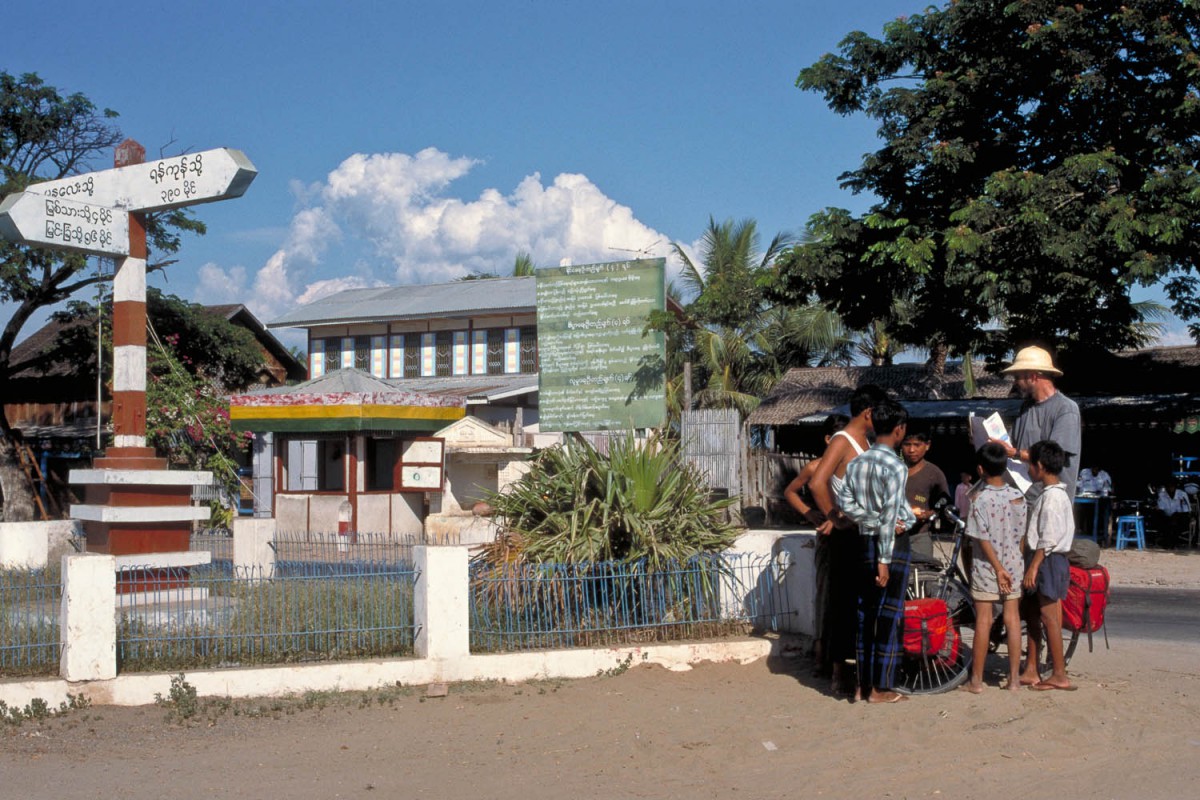 In every town and village you’ll find small restaurants. Burmese and Chinese food is widely available.

Purified drinking water is available in 1 litre bottles along all main roads and in all towns. One bottle will cost approx. 50 Kyat (0,10 U$ nov 98). Soft drinks (locally and imported) are available, often cool or even cold. Soft drinks in cans is about 5 times more expensive than drinks in bottles (0,25 cc)

Licensed (hotels that have a permit to accept foreigners)

In most of the towns we stayed were licensed hotels and guesthouses. These have to be paid in US dollars or FEC’s. Many hotels will offer airco-rooms, which can be very pleasant after a hot day of cycling. Unfortunately power supply in Myanmar is extremely unstable. Most hotels will have generators but these will not power any ac’s in periods of power failure. The only exceptions we found were the Thante Hotel in Bagan and the Bagan Inn in Yagon.

As a cyclist you will have to stay in towns were foreigners normally do not stop or stay. Hotels or guesthouses in these towns can be reluctant to let you stay. In those cases we went to the police (or the police came to visit us) to obtain permission for a one night stay.

In fact it is the local immigration officer rather than the police who can give this kind of permissions. Local authorities may be unwilling to let you stay. Just stay calm, always smile and tell them that you are very very tired.

Every town and village in Myanmar will have a monastery. It’s possible to sleep there. We did it at three occasions and enjoyed it.

Sleeping in a tent is not permitted. We heard from one cyclist whose tent was confiscated while camping in Myanmar. We carried two lightweight RidgeRest mattresses and a mosquito-net. This proved to be very useful when staying at cheap guesthouses and monasteries.

Dealing with local police and officials

We traveled totally independent and passed through numerous towns and villages. We were never stopped by police or other officials.

Sometimes (but not always) the owner of an unlicensed guesthouse sent us to the local police station to get permission to spent a night in that town. Usually we would sit and wait for an hour or so while the police was trying to put us on a bus to the next town with licensed hotels. We just politely refused that offer and said we were too tired to travel any further. After some talking they always allowed us to stay (for one night only). Just be patient and keep smiling.

A few times policemen came to the monastery or guesthouse to write down our names and ask where we would be going next. One night a police officer even offered to put an armed guard in front of our hotel room…

Of course cycling is the best way to get around but Myanmar is a very large country so you may want to consider one or more of these alternatives:

In Yangon we hired an car to bring us to the starting point of our trip. For this full-day ride we paid U$ 70,- (about twice the price of two train-tickets). The advantage was that we had door-to-door transportation and more important we were able to travel during daytime (busses going north leave in the evening from Yangon).

For longer distances luxury air-con busses are a good option. The problem is that these buses have limited cargo space. We discovered that it was difficult to fit in a full-sized touring bike without really taking it apart. When traveling from Inle Lake to Yangon we solved this problem by buying the 5 backseats of the bus and placing the bikes on those seats. 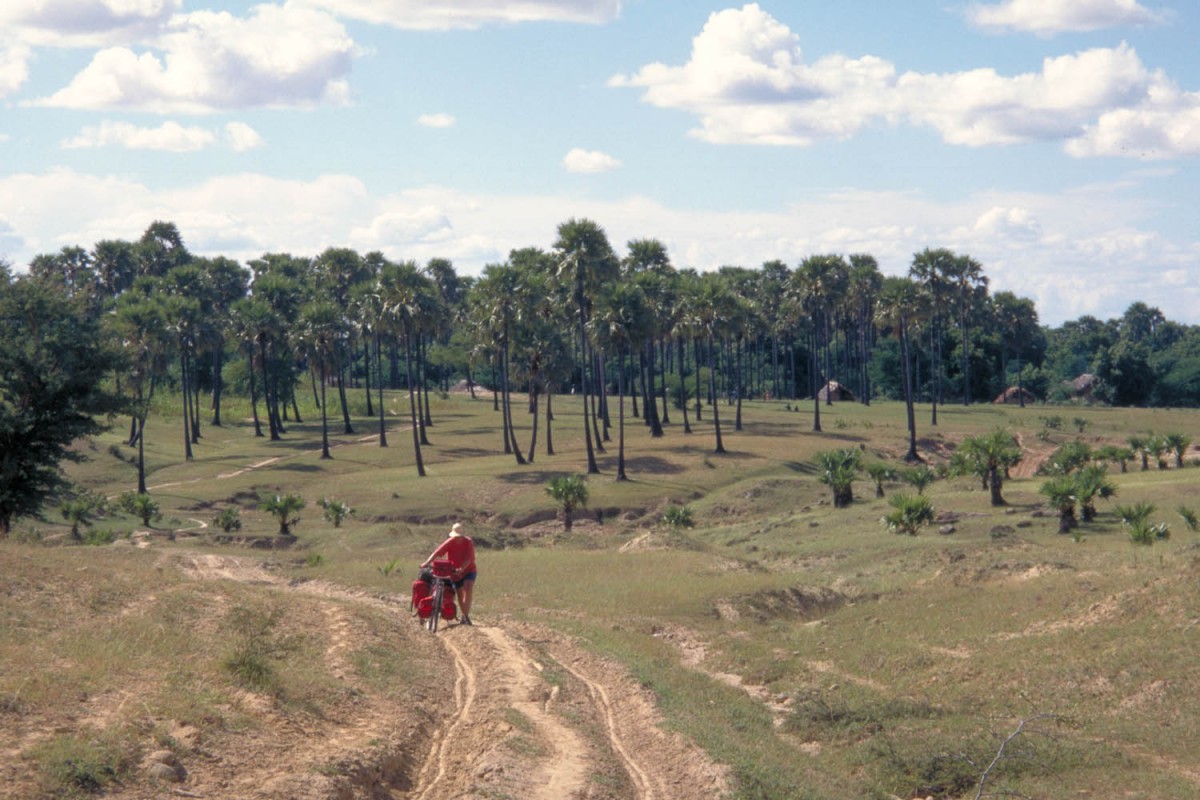 not all roads where in good condition

In Yangon we were told that taking our bikes in the train to Mandalay would cost only K 60 each and we would have to box them. The tickets itself had to be paid in dollars of course.

We found it very easy to flag down a truck when one of the bikes broke down on two consecutive days. Drivers expect some payment though. Trucks in Myanmar tend to be very slow; speeds of just 30 km/h are not uncommon.