Our route in South Australia

After a very long flight we landed Sunday September 13 at 6:00 pm local time in Adelaide . On the way to the center we shivered with cold and fatigue, it was only 16 ° C , and it was raining . We hired an on- site caravan instead of setting up the tent. .

The next day we left Adelaide cycling on paths through a park and started immediately outside the city on the Mawson trail . It is not a success : the route followed a ‘four wheel drive’ track. After the rain yesterday the surface was so sticky that it blocked the wheels within a few meters. We decided to return to the asphalt. Later we learn that this was  probably the worst part of the whole route .

We also skipped this trail sometimes in order to avoid large detours because the route designers seemed to suffer from a severe form of asphalt phobia .

On the way to the Flinders Ranges

The route lead us thorugh  through a varied landscape . In three days we cycled along the deserted forest paths of the Mount Crawford Forest , among the vineyards of the Barossa Valley and along vast meadows where we only passed a farm just a few times a day .

Usually, we travelled along good dirt roads. Only the weather was poor. It was overcast and mostly only 16 ° C. The people we met said that we should not complain , because ” we are just coming out of winter . And it was for Australian standards a very cold winter : for the first time in a hundred years it has snowed at Ayers Rock .

On the way to Burra it started to rain.

At Stone Hut the Southern Flinders Ranges officially starts. The forest seemed to teem with kangaroos. At the campsite in Melrose they jump the next morning around the tent . Now we are in the outback , the dry and arid central Australia. No immense pastures , but an immense plain with low bushes . Because the weather has cleared, we dare to follow a dry weather road , a road is passable for cars only in the dry season . 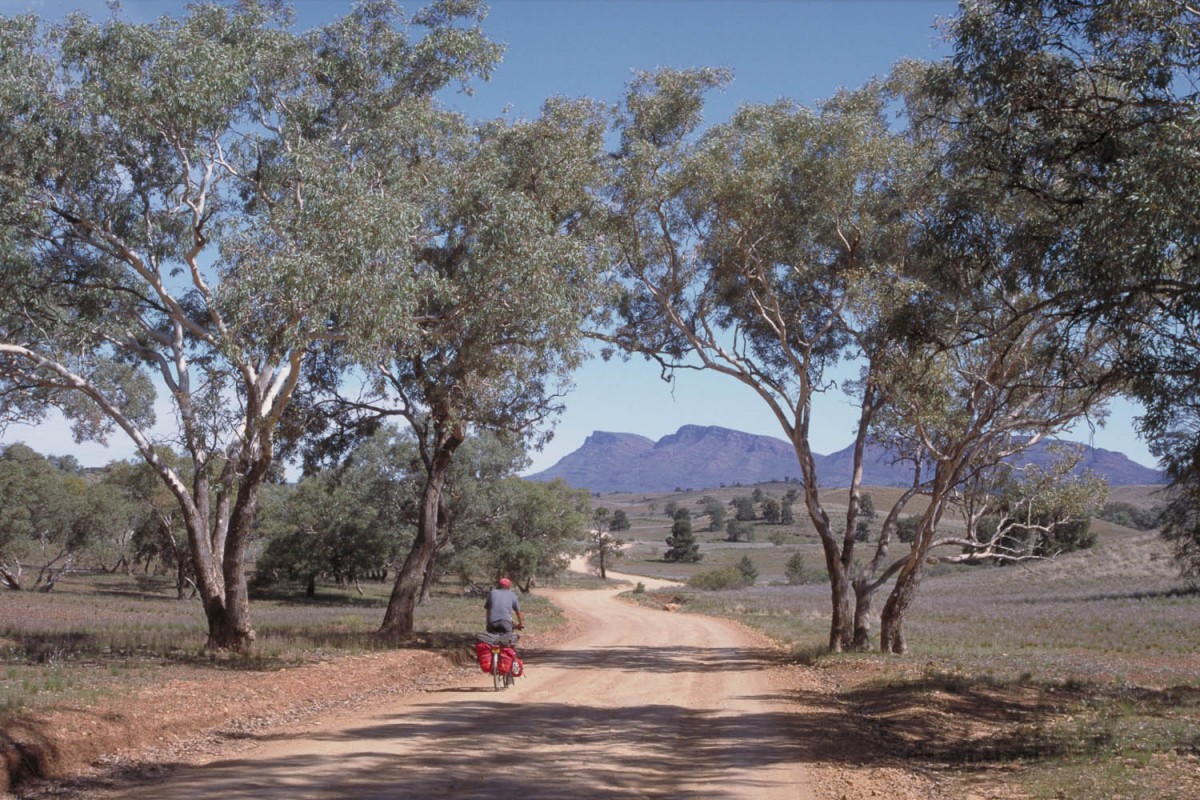 In the Flinders Rage

At Hawker the Mawsontrail ends for us. It is still one day ride to the entrance of the Flinders Ranges National Park , the protected heart of the vast Ranges. We camp at Wilpena Pound . The pound is formed by a ring of peaks. We climb several of those peaks. The first time we are completely surprised by the unexpected stunning views of the pound and the national park .

Four days we cycle through the national park . Usually the road follows the river bed , which is not exactly contributing to the cycling comfort . In case of rain , the trails are regularly closed by the park for all traffic . Also outside the gorges are the bumpy roads . But the views of cliffs , beautiful old gumtrees and fields of wildflowers compensate any inconvenience . 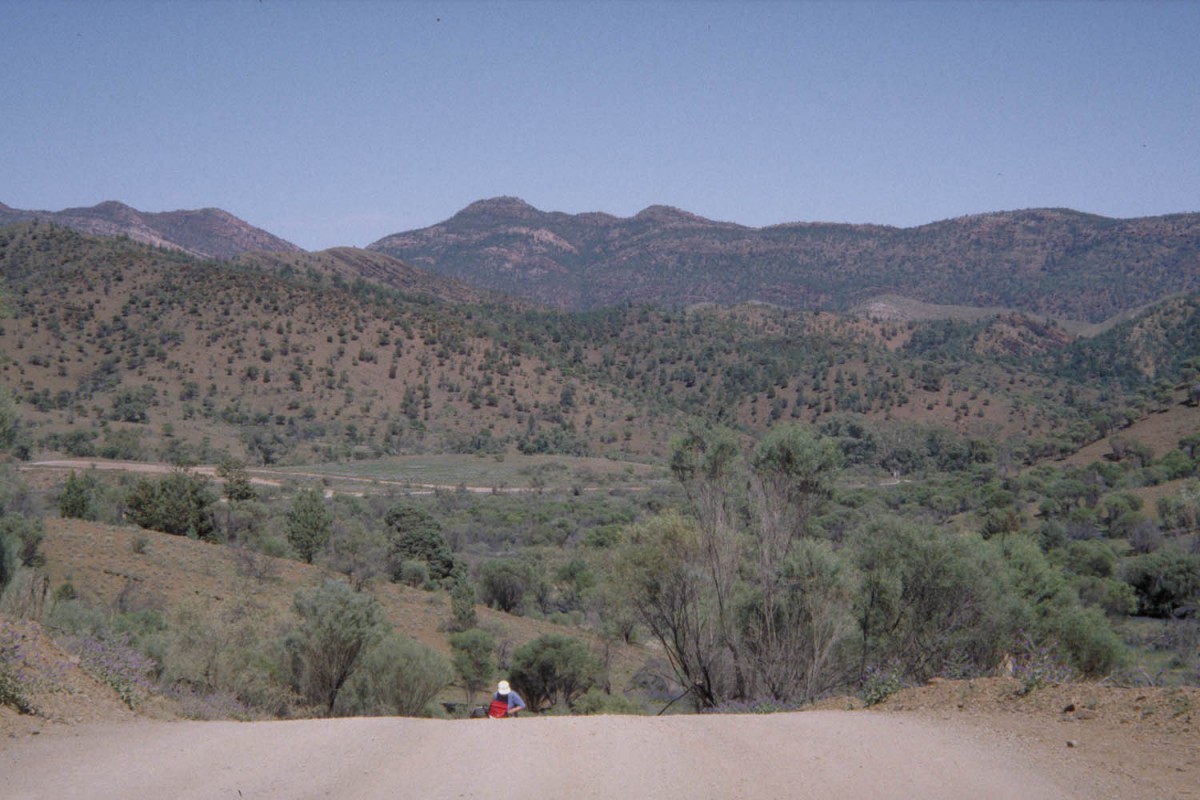 There are designated places where camping is allowed , but there are no facilities. We get our drinking water from the creek . There are many birds here. Not only galah ‘s ( pink gray parrots ) that we see every day this whole vacation at dozens , but swarms of tiny white cockatoos . We camp next to a tree where swallows feed their hungry kids. Again kangaroos graze near the tent and the Bunyeroo Gorge emus cross our path.

The day we left the park is particularly hot. In more than 32 ° C with a wind gale force large clouds of dust blowing up high in the atmosphere …. and us almost off the road .

On the way to Orroroo we hear something snap on Paul’s bike. Upon inspection it is one of the brand new pedals appears to be broken. On the stump of steel that is left on the crank Paul places with some difficulty his big toe, and we manage to get to the next village down the road. 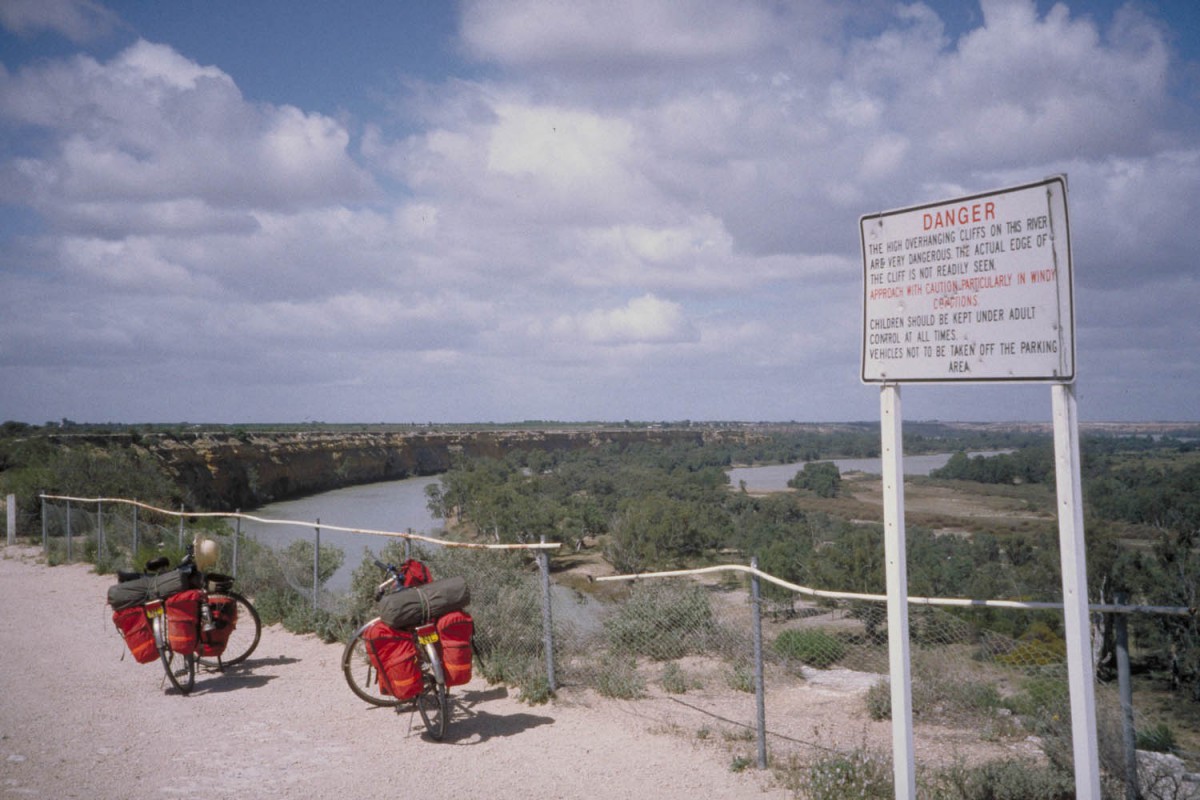 View of the Murray River

There we perform an emergency repair at the garage . On the remnant of the pedal a piece of pipe is welded . We change the route to go to the largest village in wider area in the hope a new pedal to find . Otherwise we would have to take a bus all the way to the coast . After an extensive search through the village we find the garage annex bicycle shop . On the wall hang spare parts from various sets of pedals with the wrong thread is literally only one that fits . These entirely made-in – China plastic pedals would last the rest of the trip effortlessly.

On the way to Burra we have by way of special exception, a good tail wind. We race with 25 kms per hour effortlessly over the gravel roads through the deserted land . Burra to Morgan is a full day without us even pass a gas station . The road is paved , but fortunately the job is not quite done.

At Morgan we reach the Murray River , one of Australias largest rivers. With dams , the water level is regulated , so there is always enough water to irrigate the citrus fruit along the banks . We are pleasantly surprised by the heavy sweet scent of citrus blossoms blowing over the road .

In the dry Australia , this wetland area is also an important national holiday . After the long rides through the dry outback we get a holiday feeling as we cycle along the river . We are not obliged to submit to the next village .

Leaving the Murray at Loxton behind us by stabbing at Swan Reach , towards Adelaide . Under normal circumstances it would have been a boring day , but a severe stormy head wind on a straight road is 98 kilometers from the day a true agony .

Swan Reach is only two days cycling to Adelaide . In the Adelaide Hills we enjoy the changing views and we suddenly know what we missed in the Murray : it was pleasant bike , but to our taste a little bit too much of the same .

In Adelaide we visit the Australia Museum, where an entire room is dedicated to Mawson . The Mawson , after whom the trail is named . We see the bike which he used decades ago, crossing the Flinders Ranges on his geological expeditions.