Home Destinations Asia Thailand Along the Mekong our route

Along the Mekong our route

In October and November 2001 we cycled from Vientiane (Laos) to Siem Reap in Cambodia. We traveled through Eastern Thailand, following the Mekong River for some time and visited the famous Khmer ruins in the southern part of East Thailand. We entered Cambodia at Poipet to end our trip at Siem Reap.

This page shows a detailed Tour report with distances, accommodation and other ‘on the road’ details. 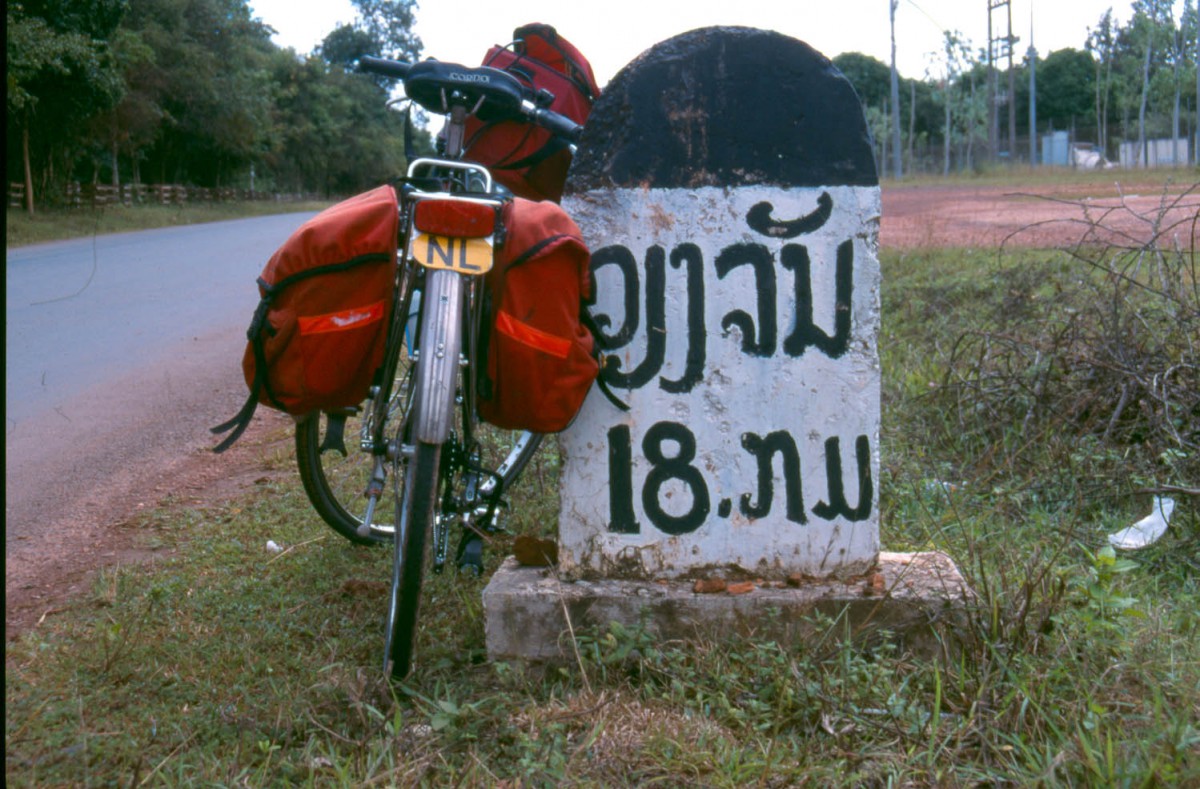 The main road from Vientiane south to the Friendship Bridge is in reasonable shape. The Buddha-park, 8 kilometers beyond the turnoff for the Friendship Bridge, makes an interesting stop. Dozens of concrete deities, Hindu as well as Buddhist are lined up in a small park. Crawl into the giant concrete globe and climb up to nirvana! 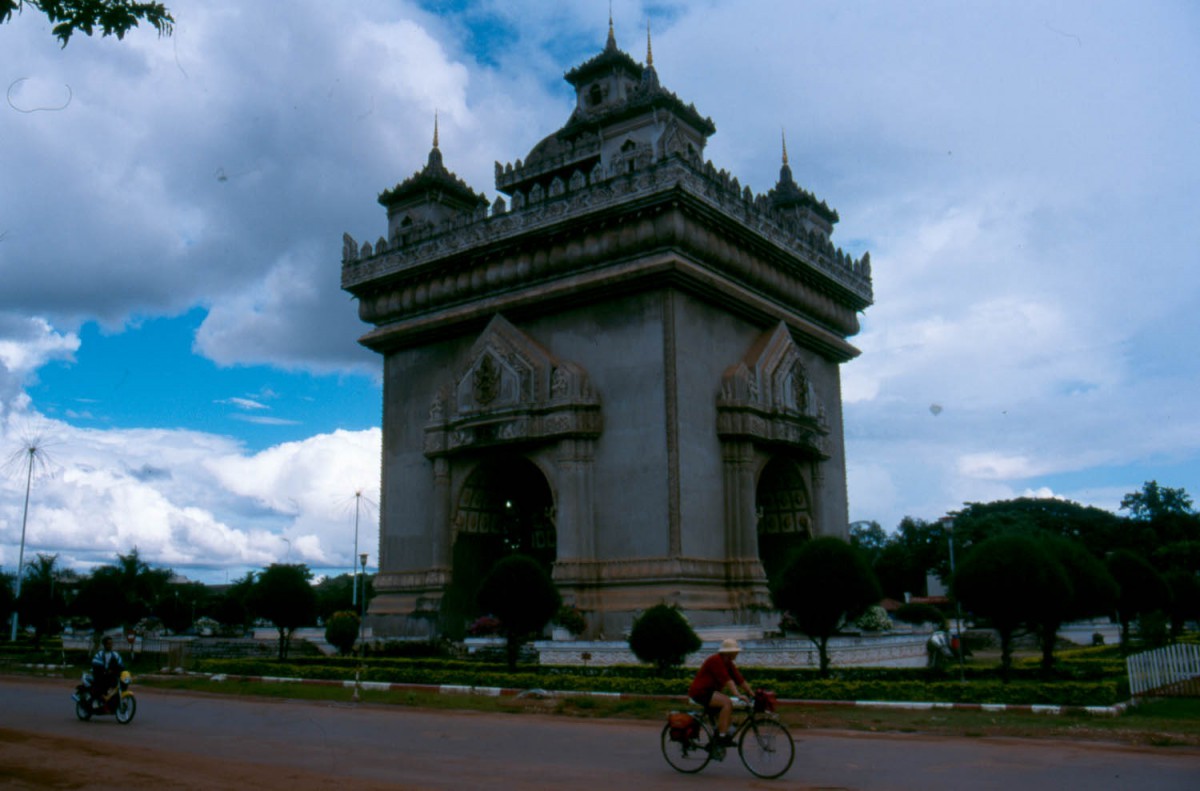 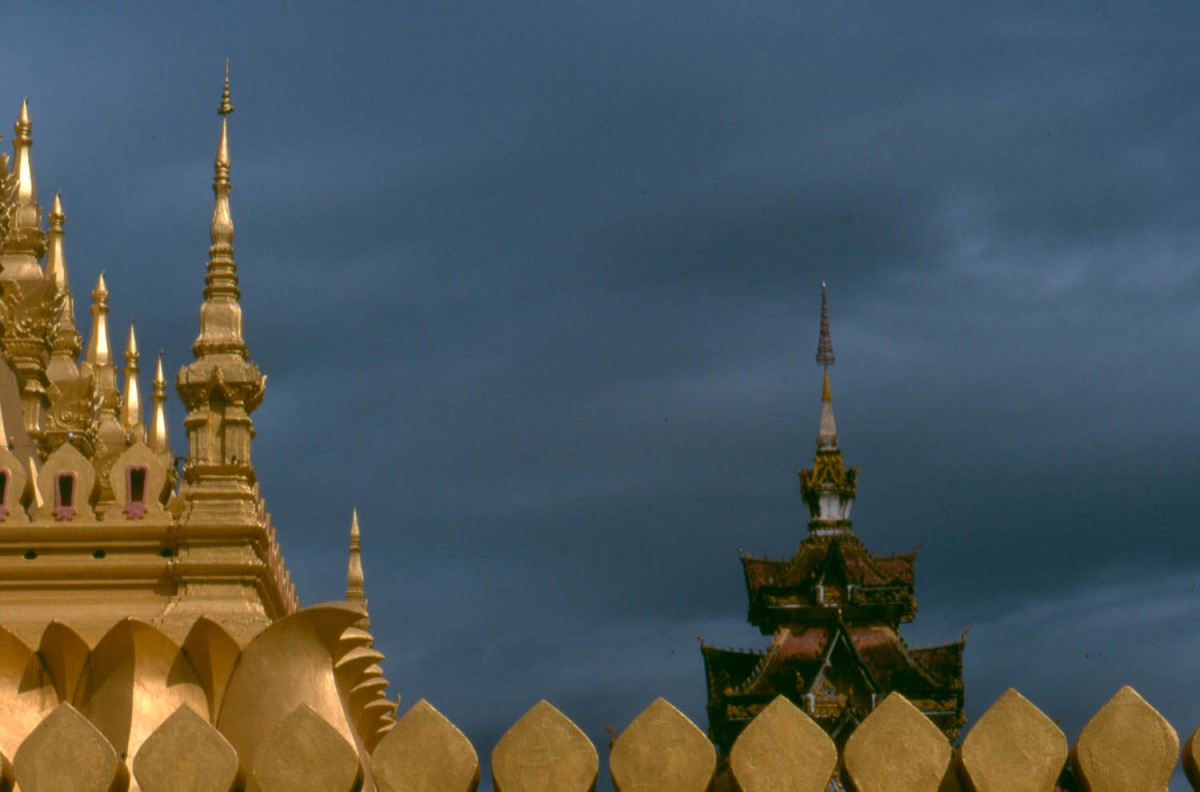 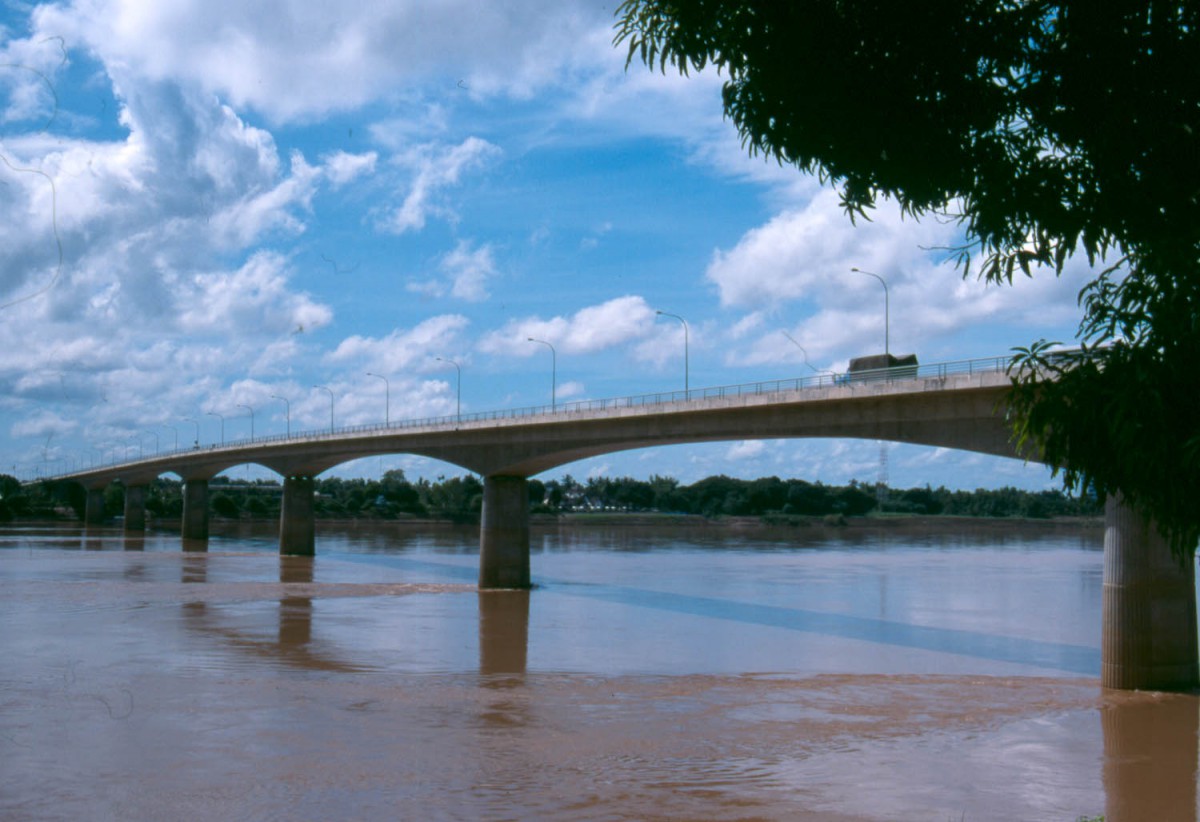 No cyclists or pedestrians are allowed on the bridge. You must take a shuttle bus for 2500 kip per person and 2500 kip per bike. The ride takes only a few minutes and drops you off at Thai immigration. Most nationalities do not require visa to enter Thailand.

No cyclists or pedestrians are allowed on the bridge. You must take a shuttle bus for 10 baht per person and 20 baht per bike. The ride takes only a few minutes and drops you off at Laos immigration where you can get your visa for US$ 30. About 4 km beyond the Friendship Bridge is Nong Khai. Plenty of hotels and all facilities here.

A good road with a wide shoulder follows the Mekong. Not much traffic on this stretch. Accommodation maybe available at Phon Phisai or Pak Khat. After Pak Khat there are some good views of the mountains on the Lao side of the Mekong.

Note: Although you will be following the Mekong good views of the river are rare. 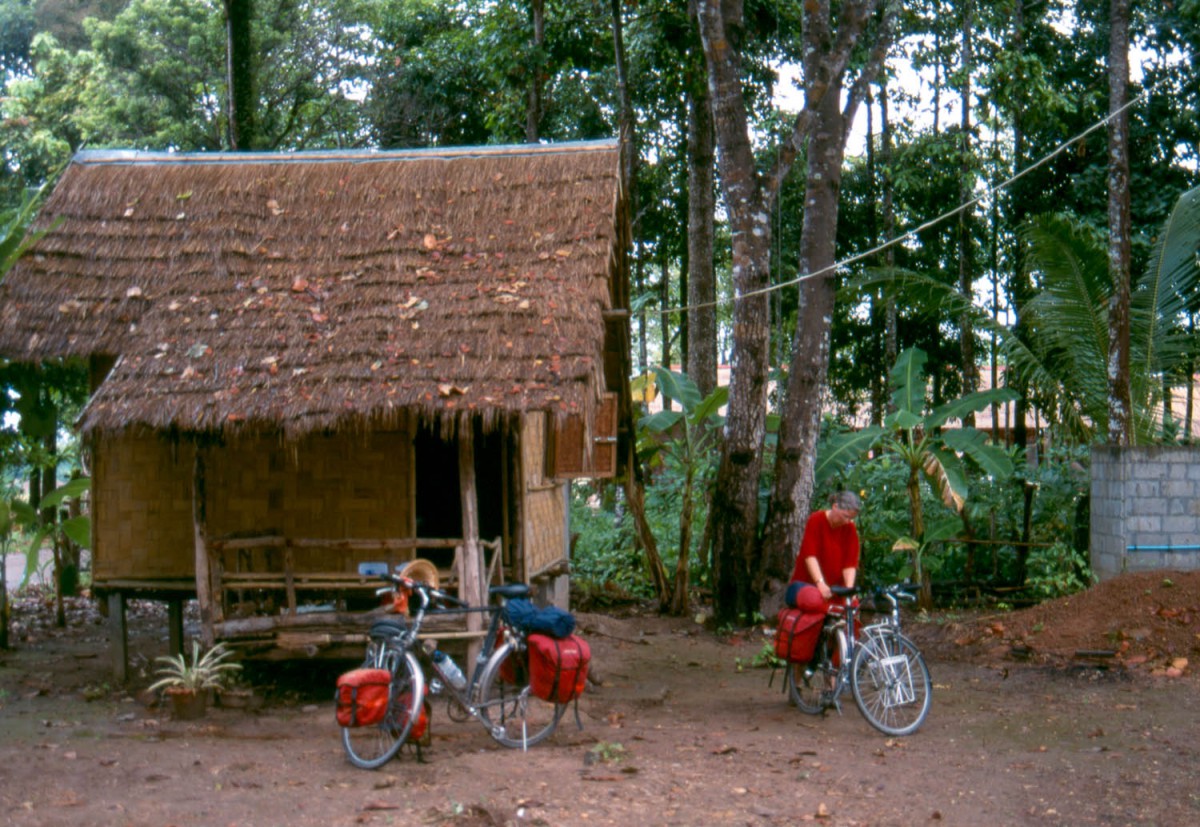 The village of Ban Ahong has accommodation. One stilted bamboo hut on a superb location near the river. Meals are available. After Bung Kan the road again turns away from the Mekong. This part has a few hills. At Bung Khla you are near the river again. Another 44 km further is Ban Phaeng. A small town with a guesthouse that doubles as a brothel. The guesthouse is signposted in roman script but the management doesn’t speak English.

The village of Ban Dong Bang has nothing to offer except a few shops.

A few hills along this road. Not much to eat or drink except in Tha Uthen 25 kms for Nakhim Phanom. Don’t follow the bypass (check map…) Although this stretch was marked green on our map, indicating it as very scenic, there are only rare views of the Mekong River or the mountains in Laos.

This part leads you through endless ricefields along a shoulderless road. Parts of this road where under construction or repair when we passed by.

A few hills until you get to Mukdahan. Plenty of small towns and villages to buy food and drink. From Mukdahan a very quiet road nr 2242 leads to Khemmarat. Forested area with a few hills. Khemmarat has one basic hotel without a roman script sign. This is a very rural area.

No views of the Mekong as usual. At Khemmarat we left the Mekong to head for the Khmer temples of south eastern Thailand.

The first 55 km to Trakhan Phutphon are quiet and rural. After this small town it’s obvious you are approaching the major city of Ubon Ratchatani. About 2.5 km before Trakhan Putphon is a nice picnic area near a lake.

In Ubon Ratchathani there is a wide choice of hotels and restaurants. To go to Kantharalak; jumping off point for the Preah Vihear temple, leave town south and take the quiet road NR 2178. All the way the signposting for this major tourist spot is good and in roman script.

Getting to Preah Vihar

Although it’s fairly cheap to rent a car or motorbike to get to Preah Vihar (also written as Phra Wihan) cycling is an option for the energetic. The Visitors Center is 35 km from Khantaralak. The road is excellent but requires a steep climb at the end.

Visiting PV means entering Cambodia. No paperwork or visa required; there is an entry fee of 5 US$ that also can be paid in Thai baht.

We choose to go through Si Saket, thus avoiding the very busy highway 24. At milestone 34 on the Si Saket – Surin Highway is the turnoff for the Sikhorapum temple. Worth a stop; it’s only 500 m from the main road. 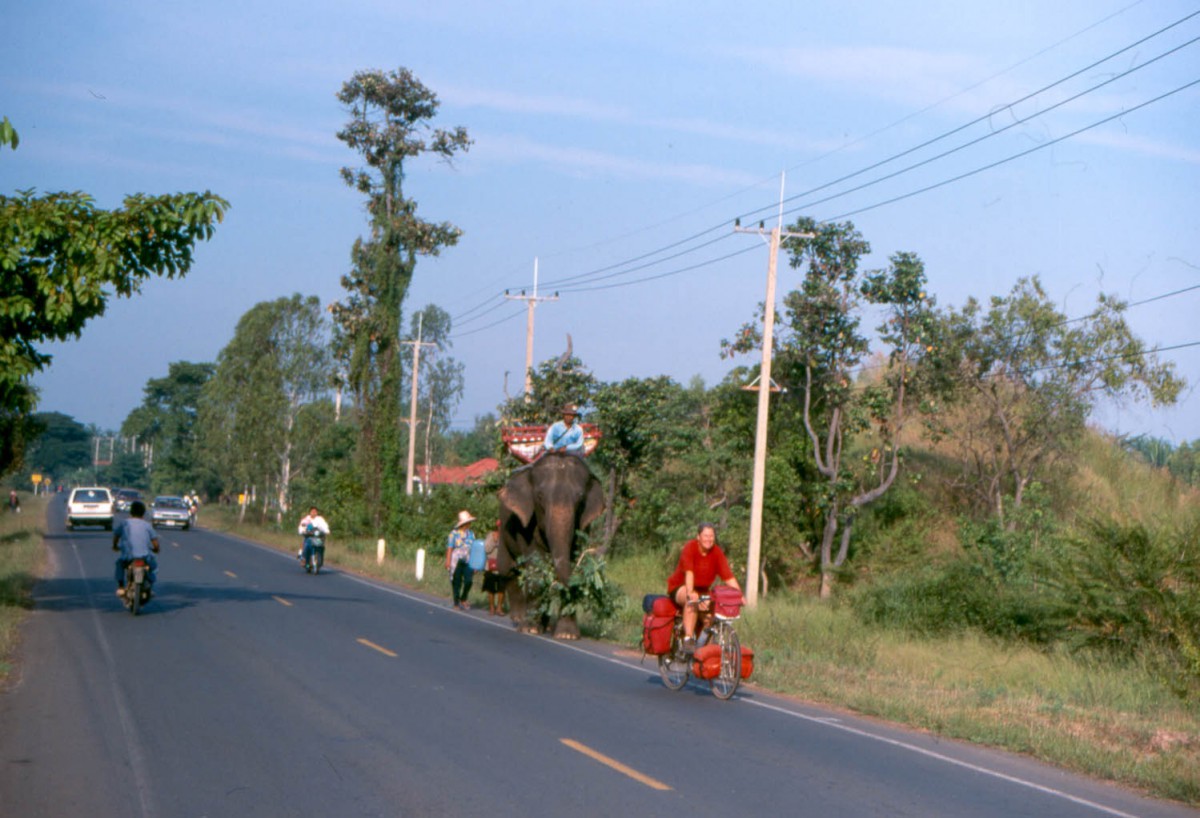 meeting an elephant on the road near Surin

At 58 km from Si Saket there is a sheltered picnic area. Surin is famous for it’s elephants. The rather touristy elephant village can be visited. Before you set out, check if there is anything going on there. Especially if you go there by bike. It’s about 35 km north of Surin, Although the road to the village is signposted a few signs seem to be missing 😉

Take road 2208 to get to Nang Rong. The last km are along the very busy Highway 24. The very friendly Park California Guesthouse is a recommended place to stay. There is a sign to the guesthouse at your left hand , at the eastern entrance of the town, just after the large private hospital and a bridge. The owner speaks excellent English and can arrange trips and other transport. 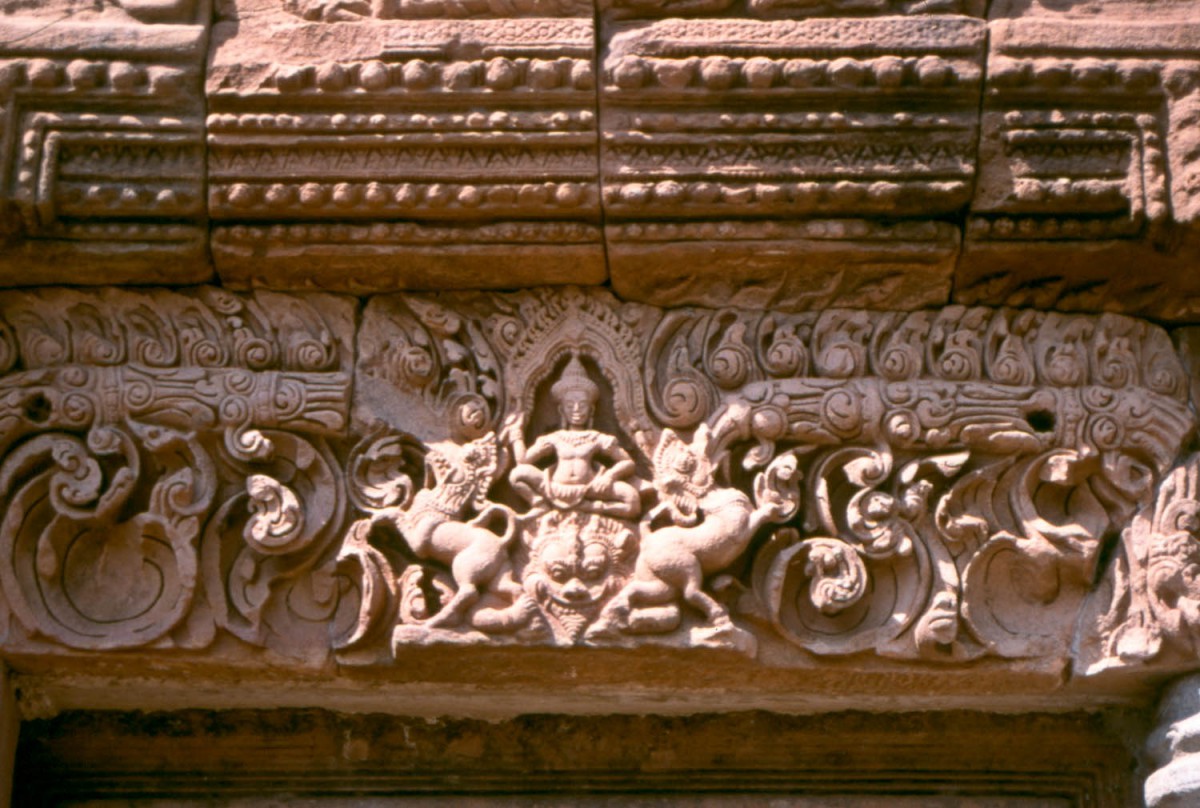 Getting to Phanom Rung

The small town of Nang Rong is the most convenient starting point for your visit to the well-restored Khmer temple complex. It’s about 25 km from Nang Rong, 14 of which go along the busy Highway 24.

Getting to Phanom Rung proper finally requires a short, 2 km, but very steep, climb. The sites in and around the Historical Park are signposted with official Historical Park signs. Unfortunately these where placed in such an awkward way they are extending their hands across the road at eye-level. At the moment of our visit these hands where almost everywhere removed. So keep your eyes open when you bike around this area. 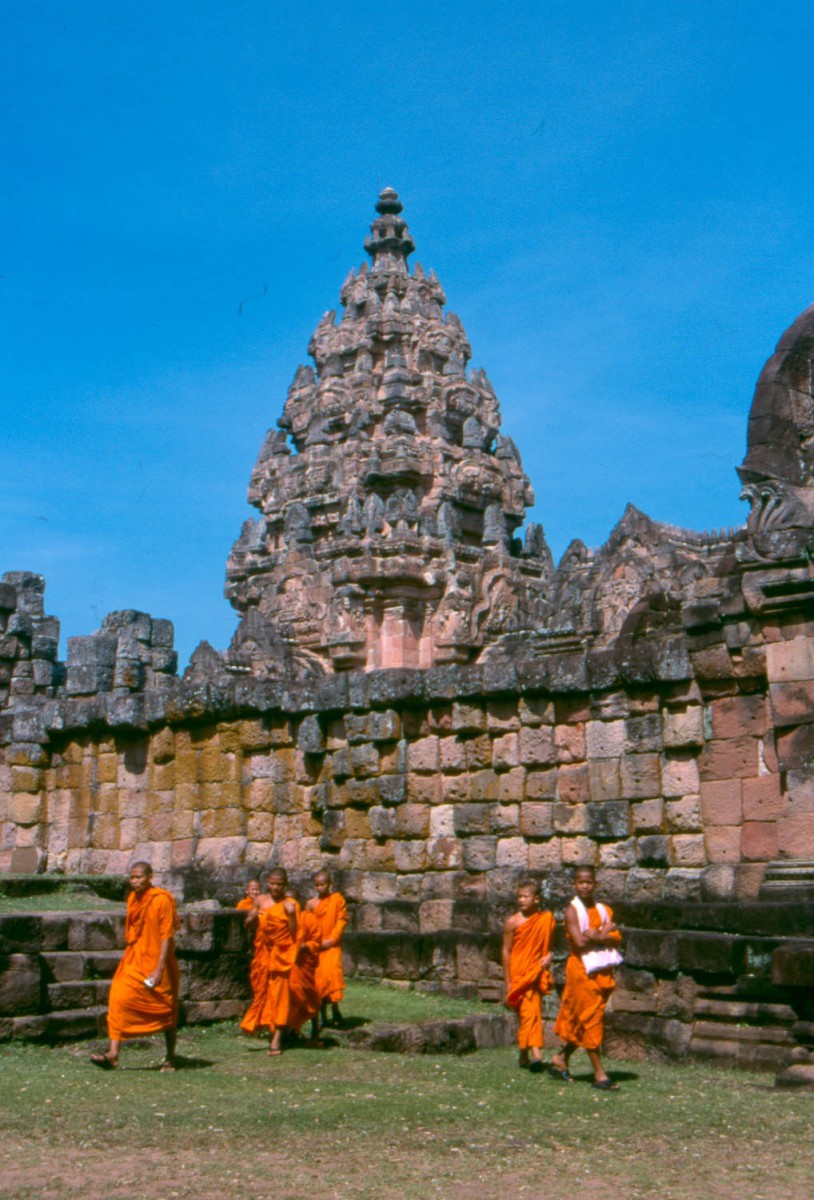 young monks at a temple

The temples of Muang Tan, also worth a visit are another 8 km at other side of the mountain. Ride down from Phanom Rung and turn sharply right at the bottom of the hill.

Although we travelled this area by car we have taken some notes that can be helpful to those who want to attempt this road by bike.

The road is in good condition. About 40 kilometers south of Nang Rong there is a steep descent to the lowlands. The road here is much narrower but we didn’t see much traffic. There are a several military checkpoints along this route.

Ta Praya is the only town of some size along the 150 kms. We heard a story of two cyclists staying here overnight at the police-station. The road from TA Praya to Aranya Prathet is new, wide and carries few traffic. There are plenty of hotels and other facilities in Aranya Prathet. The Cambodian border is 5 kilometers to the east

More on cycling in Cambodia and Angkor Wat