We cycled approx. 1350 kms in four weeks starting mid October 2018. Whenever possible we followed the dedicated bicycle routes. Mostly these routes can be found along the coast or following rivers.

Where to go: west or east or the mountains?

Without any doubt the east coast is the most popular part for cycling in Taiwan. There are green mountains and beaches and overall the whole coast in not as densely populated as the west. There is plenty of accommodation here.

The west coast has some great places to visit (e.g. Tainan with its old temples ) but for the rest it is rather uninteresting and a conglomeration of towns, villages and industrial areas. The scenery here is just not very attractive.  There are however some really nice bike routes that get you away from the busy roads. 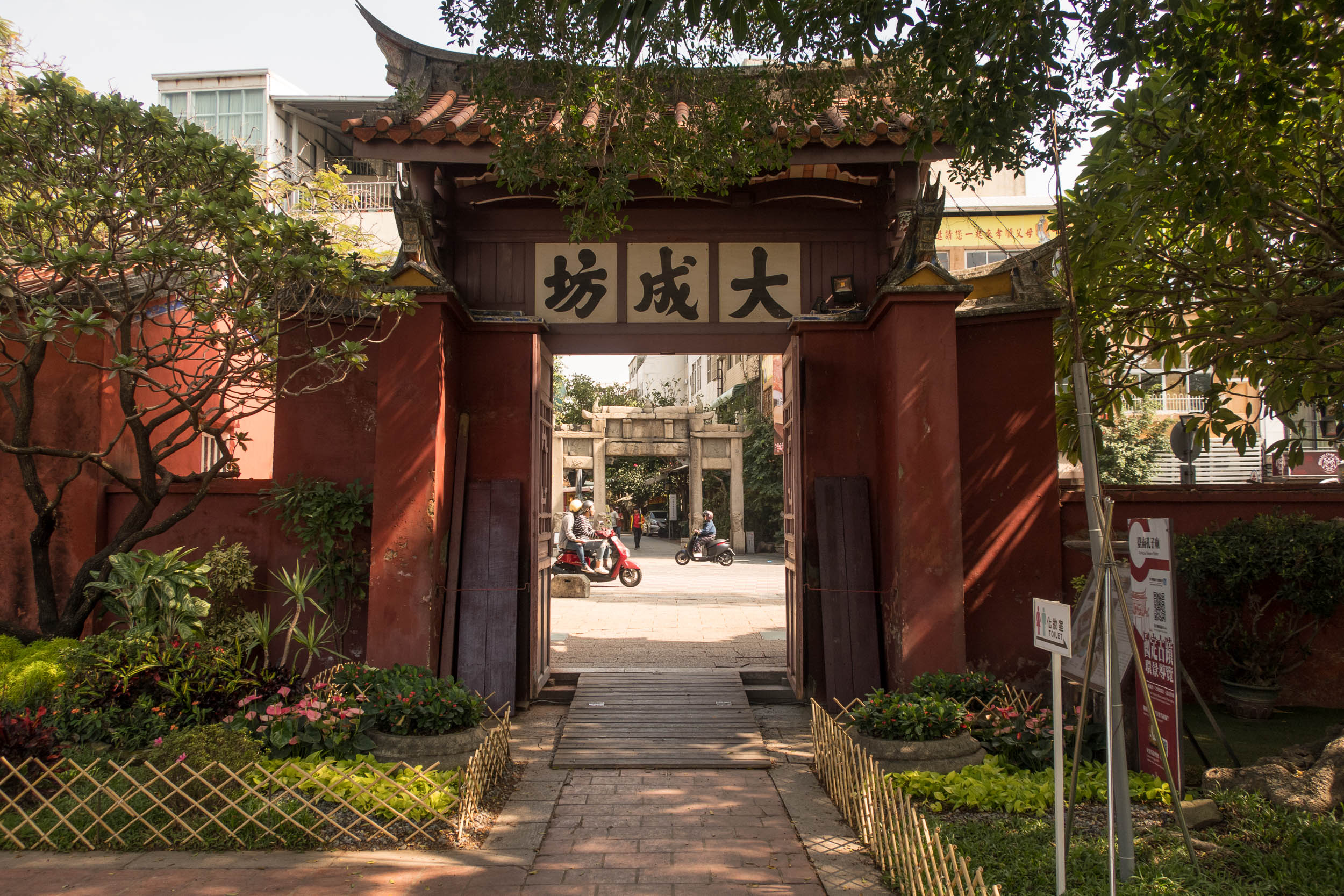 Our visit to the high mountains of  Taiwan was one of the highlights of the trip. Riding up from Yilan on highway 7 wasn’t easy (we hitchhiked the steepest part) but the scenery here is beautiful and the air fresh and cool. Any plans to visit Taiwan? Don’t forget to include one or more mountain highways! 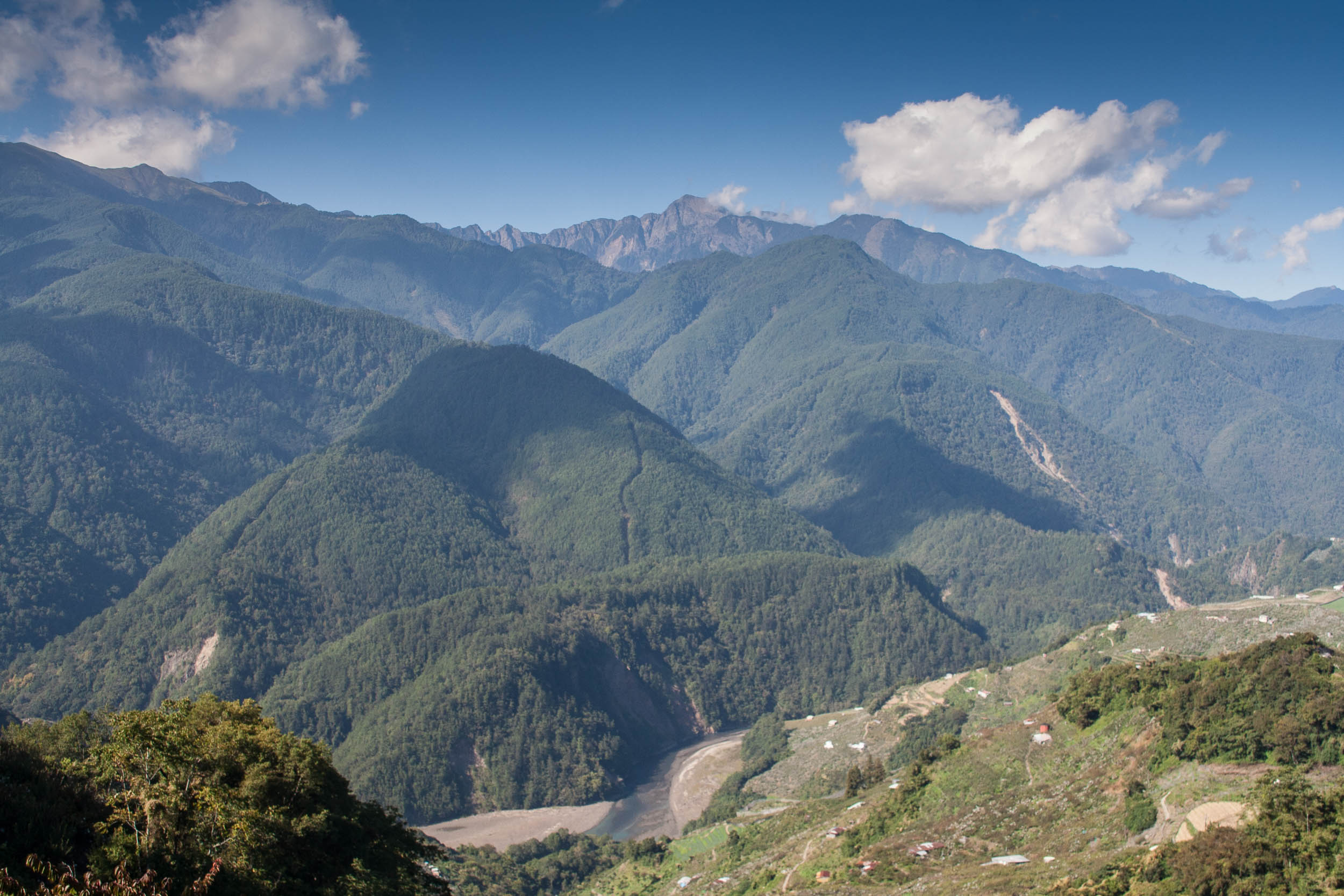 Views on the road from Shei Pa NP to Lishan. The highest peaks here are well over 3500 m!

Our general advice: avoid most of the west coast and include some mountain cycling!

This country has an extensive network of signposted bicycle routes. The most famous is the nr. 1 around the island route with a length of approx. 1000 kilometers. A map with all the official bike routes can be downloaded here. These nationwide routes follow busy main (provincial) highways and do not use the many touristic bike paths. That’s why we did not use these official routes very often.

The touristic bike routes (see our map) are difficult to locate without a map and rarely signposted but always get you away from the traffic on good paved paths and roads. Flood barrier alongside rivers often have bike paths on top and quiet service roads next to it. 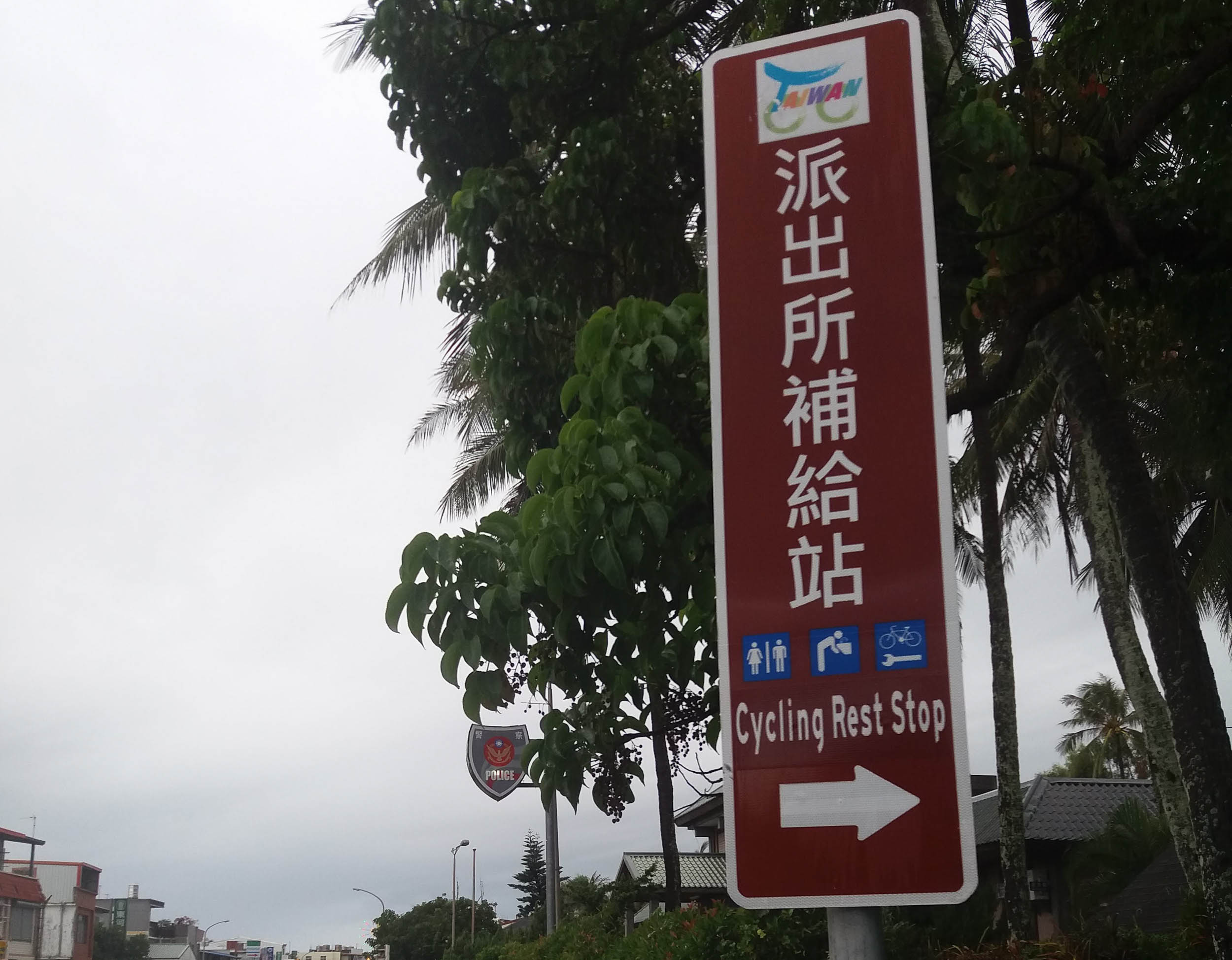 Sign often seen along the official bike routes. A cycling rest stop means that there is a 7Eleven store, a police station or another place  where you can get water, visit a toilet or use  a bicycle pump to inflate your tires .

We used one printed map for planning not for navigating: the Nelles Map 1:400.000 of  Taiwan. Mostly we relied on the Open Street Map of Taiwan using the OSmand app on our Android phones or a similar map on our Garmin GPS. These digital maps are essential to locate the (start of) dedicated bicycle routes.

Taiwan has excellent 4G internet coverage. For TWD 3000 we purchased a 30 day unlimited data sim card at the airport to use in our phones. So you could use Google Maps as well.

Roads on the east coast are quieter than on the west coast. Provincial Highways are very convenient for covering long distances. Expressways often have a service road next to it and although noisy and boring are sometimes useful for covering large distances. Multi-lane highways often have a separate scooter/bicycle lane. The main drawback of these roads is that (particularly on the west side) you always will be cycling in built up area or through industrial areas.

Traffic signs are almost always bilingual. Distances on these signs probably mark the border of cities and not the centre as this distance was always further than announced ont the signs 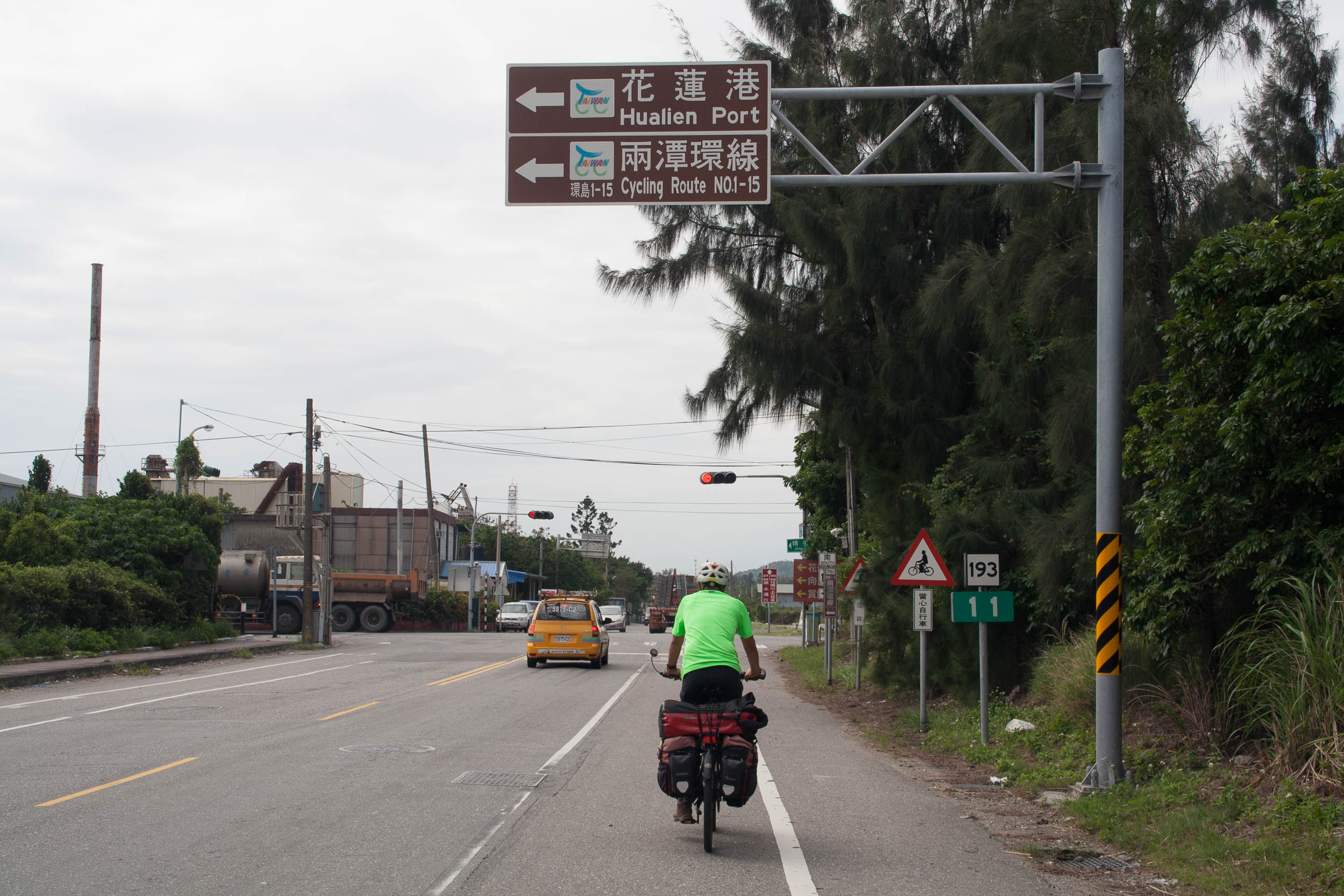 Typical main road on the east coast. With good signposting for the official bike routes

Restaurants are everywhere although it can be difficult for the non-Chinese speaker to locate them and to order anything from the menu. Google Translate is a life saver when eating out. We prefer vegetarian food and were able to order and get that in almost any type of restaurant. For the self catering the wide spread 7Eleven and Family Mart stores are a source of food stuffs.

The 7Eleven stores: the place to go in Taiwan for almost anything. 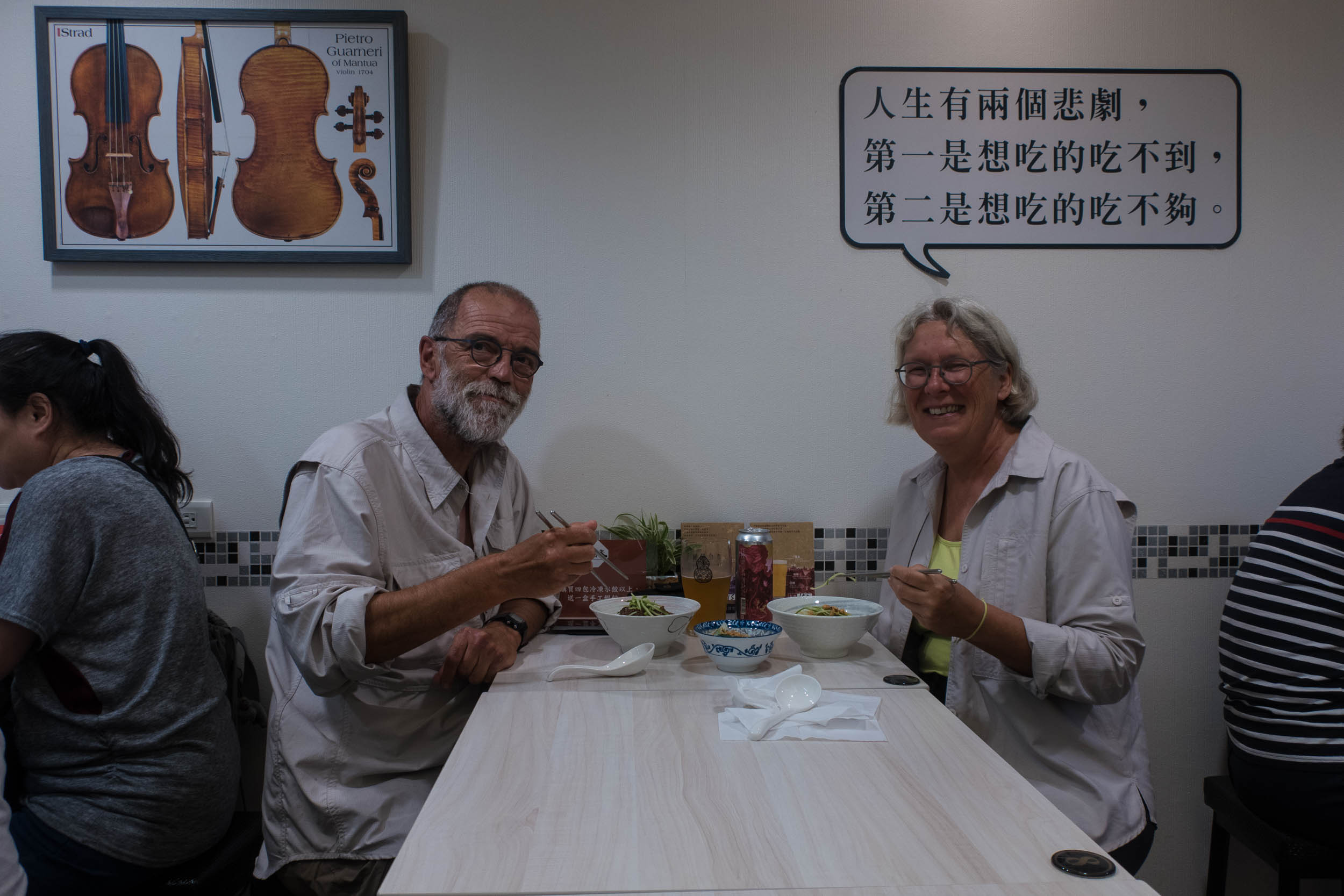 Taiwan is a good place to practice your chop stick eating skills!

We cycled in October. Weather was hot and humid most of the time. In the high mountains (above 2000 m) temperatures were much lower and the nights were rather cool at around 3 degrees Celsius. We had several days of very heavy rainfall when typhoon Yutu passed Taiwan at a distance. The wind was very strong on those days but we were lucky to go in the right direction ;-). Wind direction in Taiwan is mostly from the north west.

The weather app by the Taiwan Meteorological Bureau is recommended. 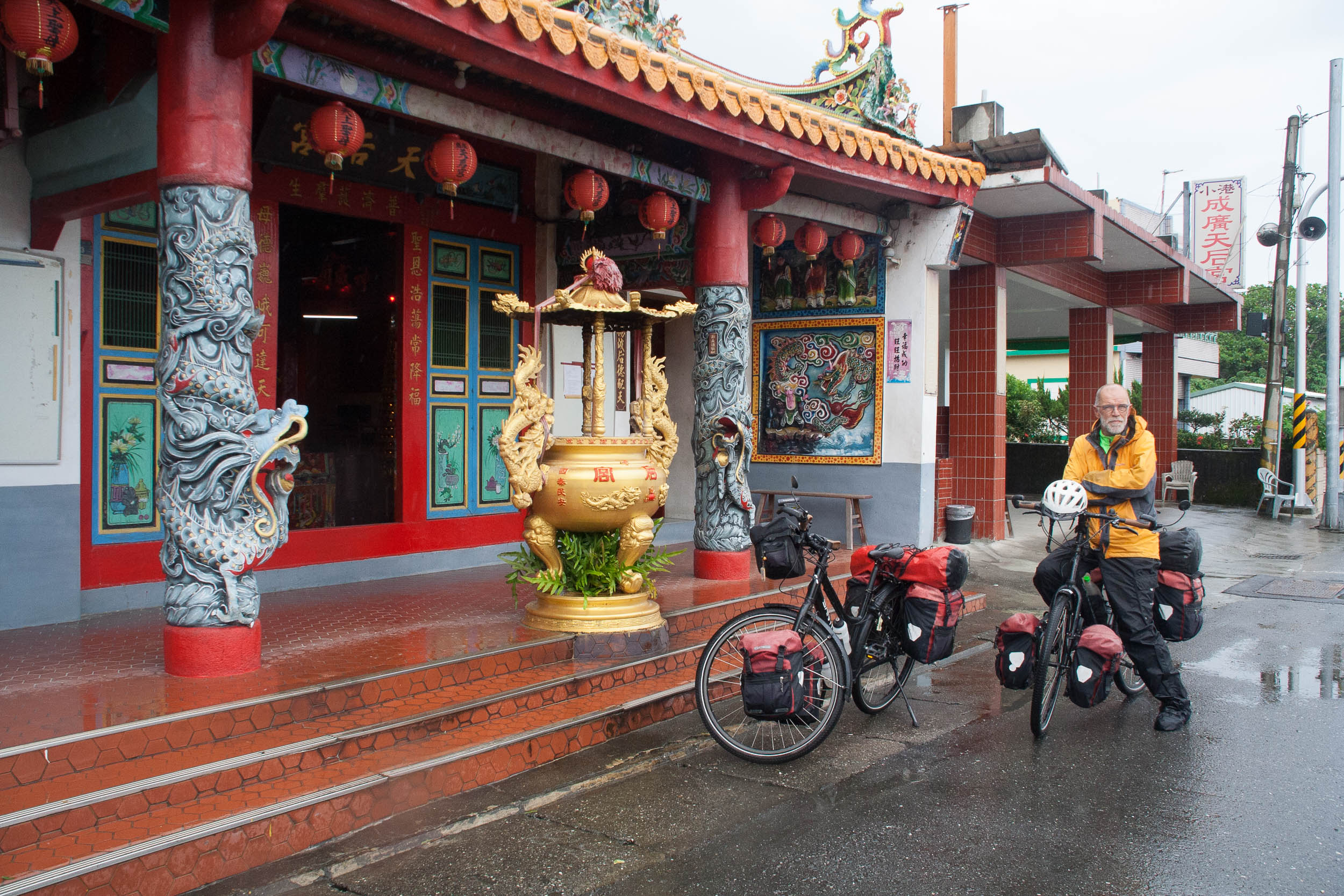 Making a stop in full rain gear at one of the thousands of temples in the country.

ATM‘s are everywhere and in almost every 7Eleven or Family Mart store. Paying with an international credit card in shops and hotels is most of the time no problem, although in small villages cards were not accepted.

There are hundreds of campsites in Taiwan but these can be hard to find. Signposting (if any) is almost always in Chinese only. On our Download page you can find a map with all (?) the campsites.  We camped three times: once on an official campsite and two times free. Any official campsite will mostly have wooden platforms where you are supposed to put your tent. A freestanding tent is therefore a good idea.

Camping is also often possible at primary schools and even at some police stations on the east coast. Free camping anywhere seems to be no problem at all. 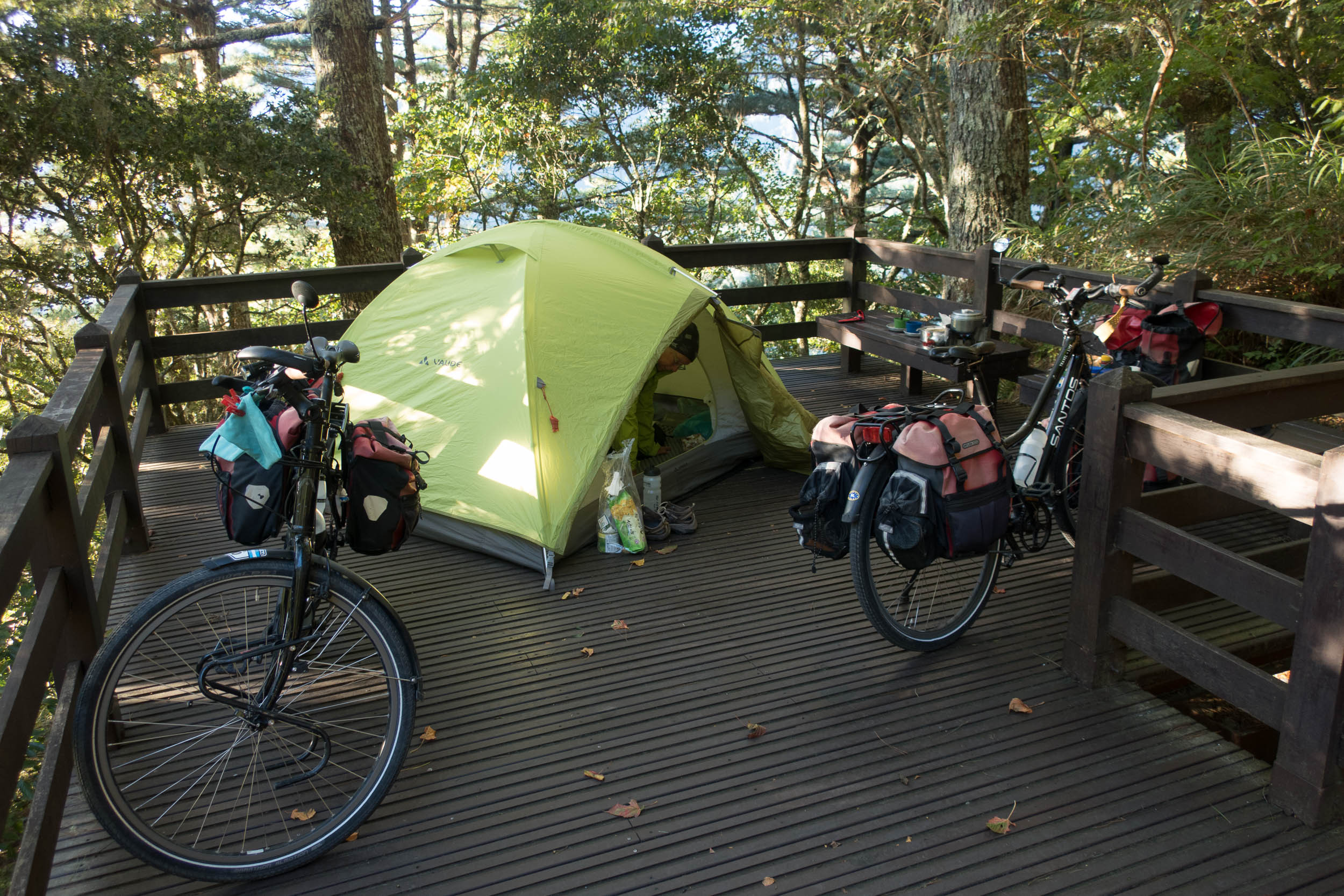 Free camping in the Taroko NP.

There are hotels, home stays and other accommodation everywhere. The usual sources like Google Maps, Booking.com and AirBnB will mostly get you a bed. An interesting alternative are the so called  Love Motels. You can rent a room per hour but also for a night. Usually you’ll find sex-toys etc. in a vending machine and condoms on your pillow ;-). We stayed once in such a hotel where we were happy with our own private garage to park the bikes. 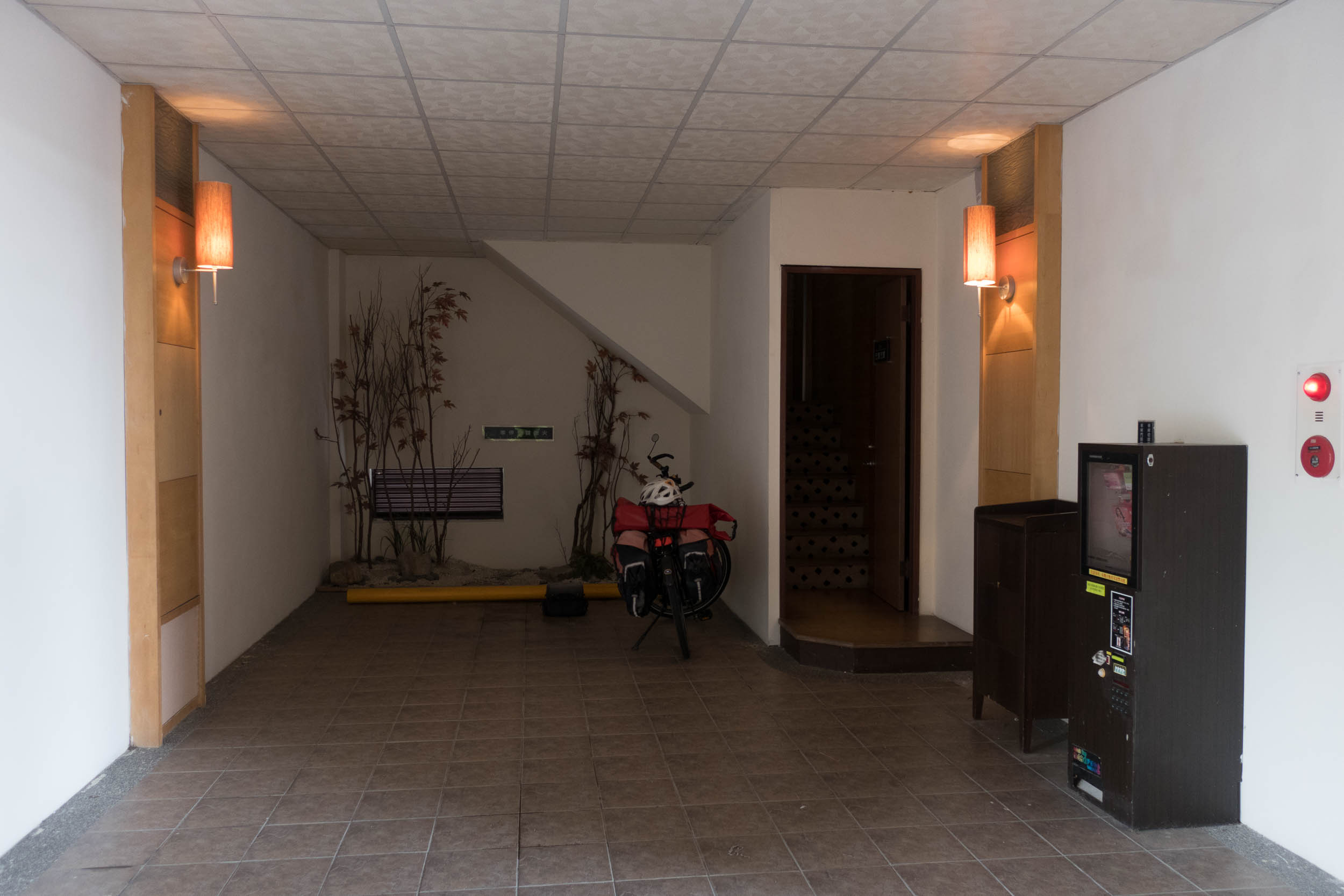 Our private garage at the only love motel we stayed. Upstairs is your our room without a window for optimal privacy.

There are thousands and thousands of temples and all of them are very suitable for a short break. Temples have public toilets and drinking water available. You can rest here in the shade or have a chat with the locals.