Our route in Scotland

In May 2018 we cycled 1600 kilometers (mostly) in Scotland. Our route is below. Click on the icons to get additional information.

Where ever possible we tried to follow the bicycle routes of the National Cycle Network. Although the bike paths on these routes are not always very bicycle friendly it’s still a recommended way to get away from busy roads.

Text continues below the map.

To England and Scotland

To get to the country we took the IJmuiden (Amsterdam) ferry to Newcastle. This is a very relaxed way to travel as you can spend the night sleeping in a real bed and after a good breakfast arrive well rested in Newcastle. Taking a bicycle with you costst 10 euros one way and requires a reservation.

The signposted bikeroutes of the National Cycle Network start just outside the ferryterminal. Cycling in and out big city Newcastle isn’t a big deal.

We followed bike routes 1 and 76 all the way to Edinburgh. Specially along the North Sea coast this route often follows walking paths that are unpaved. Often you will have to cross narrow footbridges and open numerous gates. Still the cycling here is nice with views of the sea and of countless (ruined) castles. Bike route 1 passes through downtown Edinburgh within short distance from the famous Edinburgh Castle. We did this on a Sunday so traffic levels were rather low. 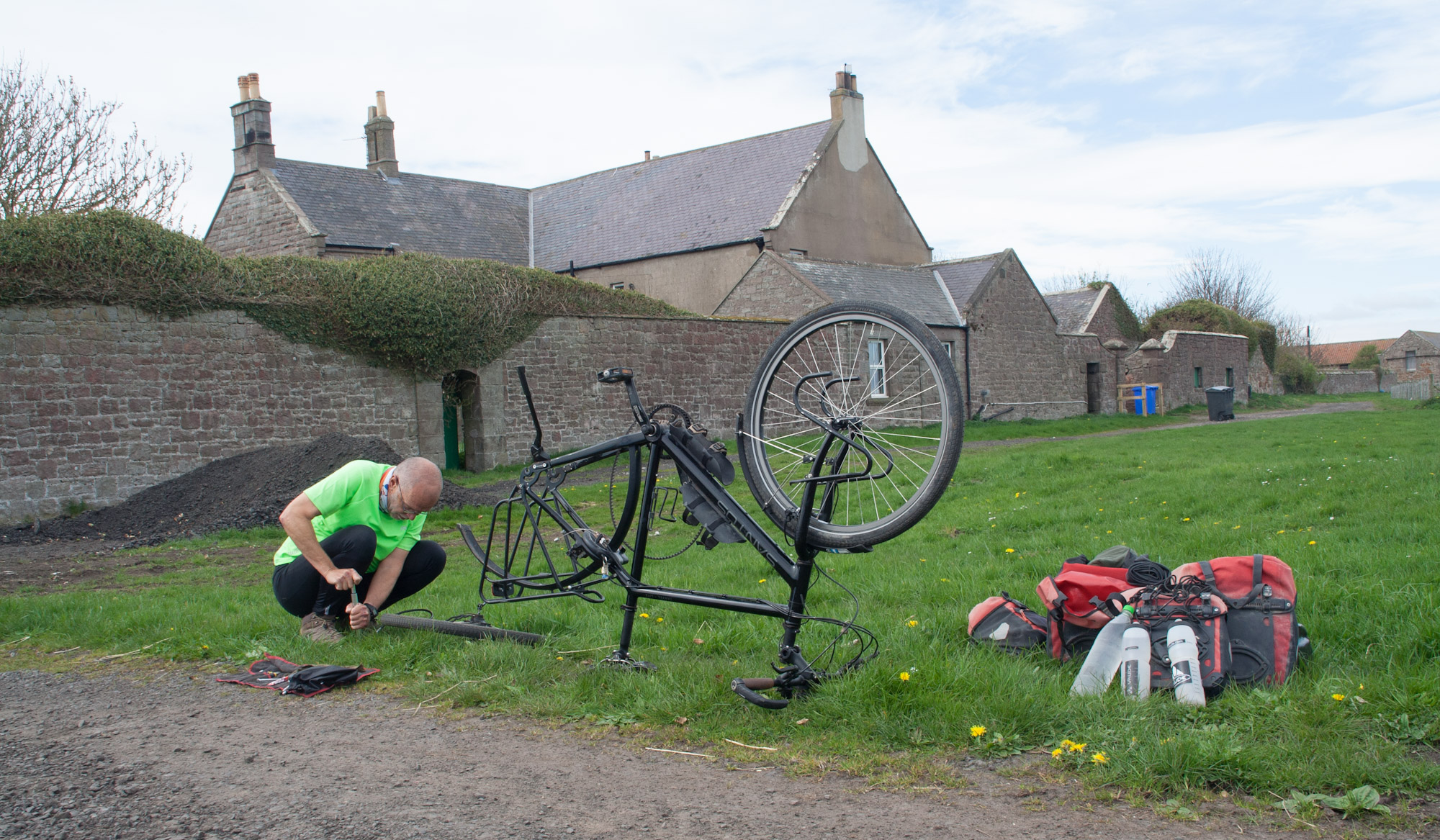 Edinburgh to Glasgow and Loch Lomond

Near the small town of Lithlingow we switched to the bike paths that follow the Union Canal and the Clyde Forth Canal (route 754). This routes offers a wonderful level ride all the way. On a busy day there can be a lot of cyclists and pedestrians on these tow paths. The route continues to Glasgow and passes this big city through the northern suburbs, all on good bike paths. Once Loch Lomond is reached the cycling becomes less pleasant. The bike path is narrow and not well maintained and closely follows the busy A82 highway. Cycling on the A82 is allowed but we would not recommend it. At Tarbet bike route 40 ends. 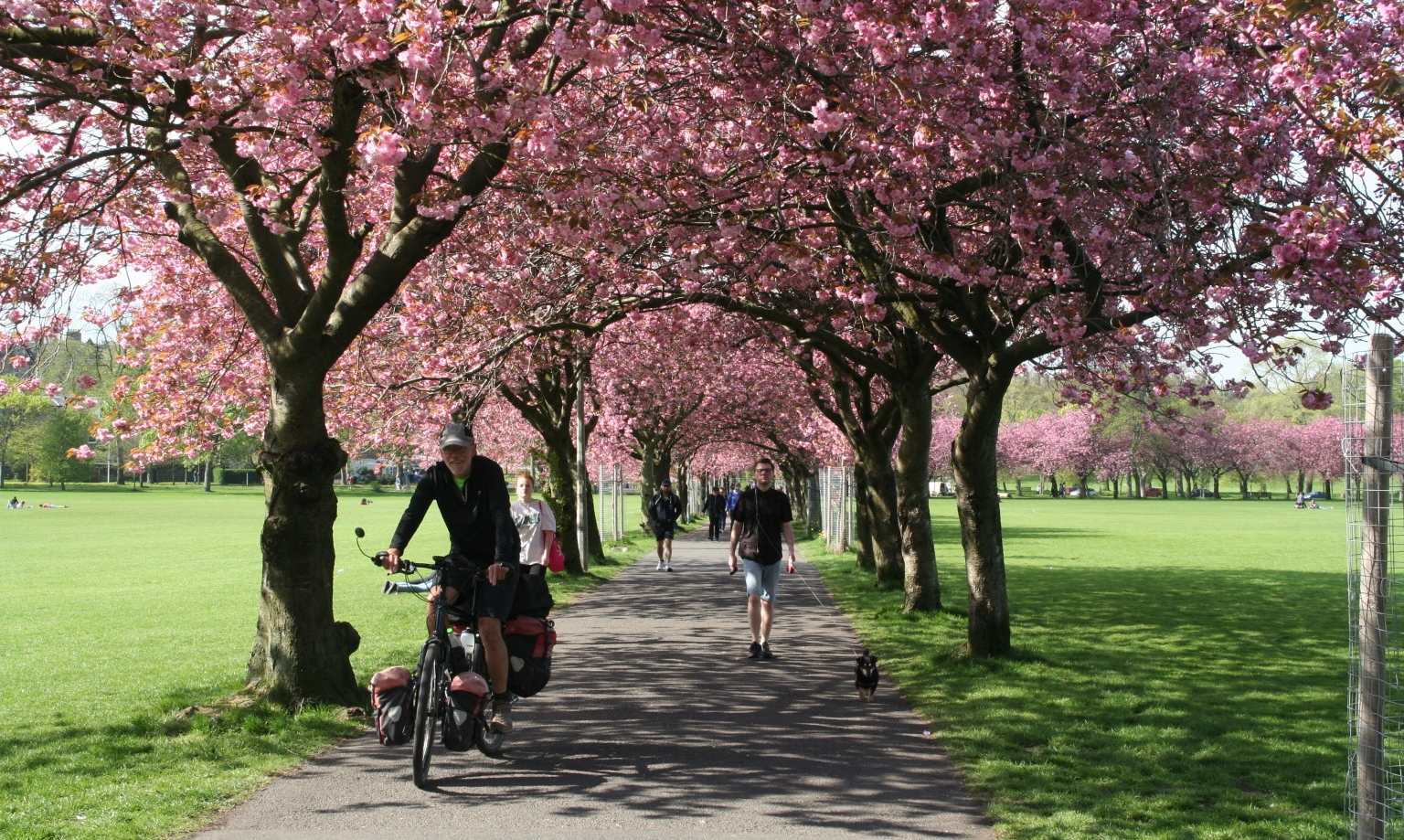 Riding the city parks of Edinburgh 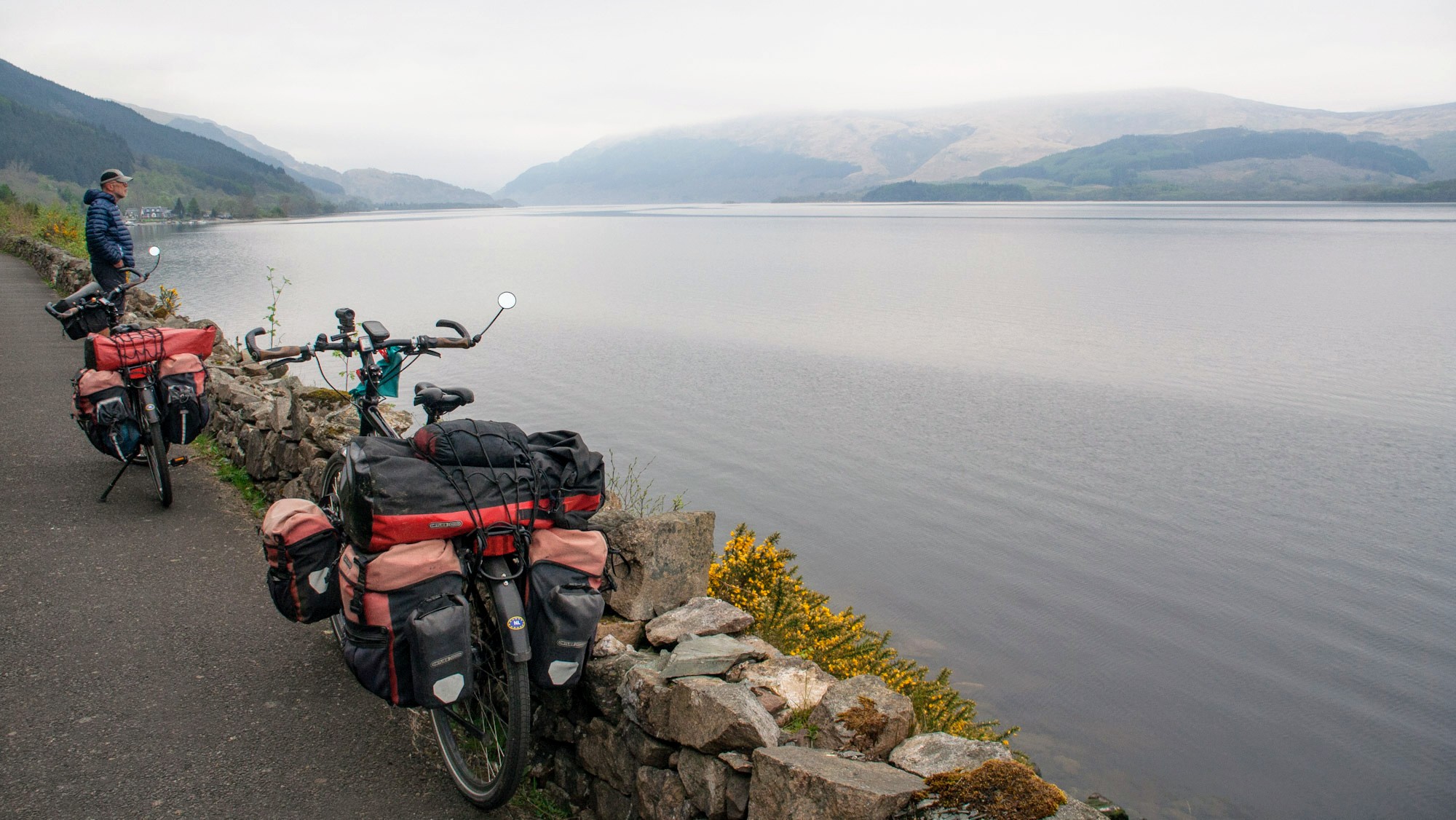 We left the convenient bike routes behind to bike west on the A83 and A85 highways. None of these are very busy. There is however a steady stream of vehicles here. At Connel we started following the NCN route 78.  At Corran this route takes the ferry to the other side thus avoiding the mostly very busy A82 highway. Please note that to get to Fort William you’ll need to take a second (smaller) ferry. This boat takes pedastrians and cyclists only and does not operate on Sundays! 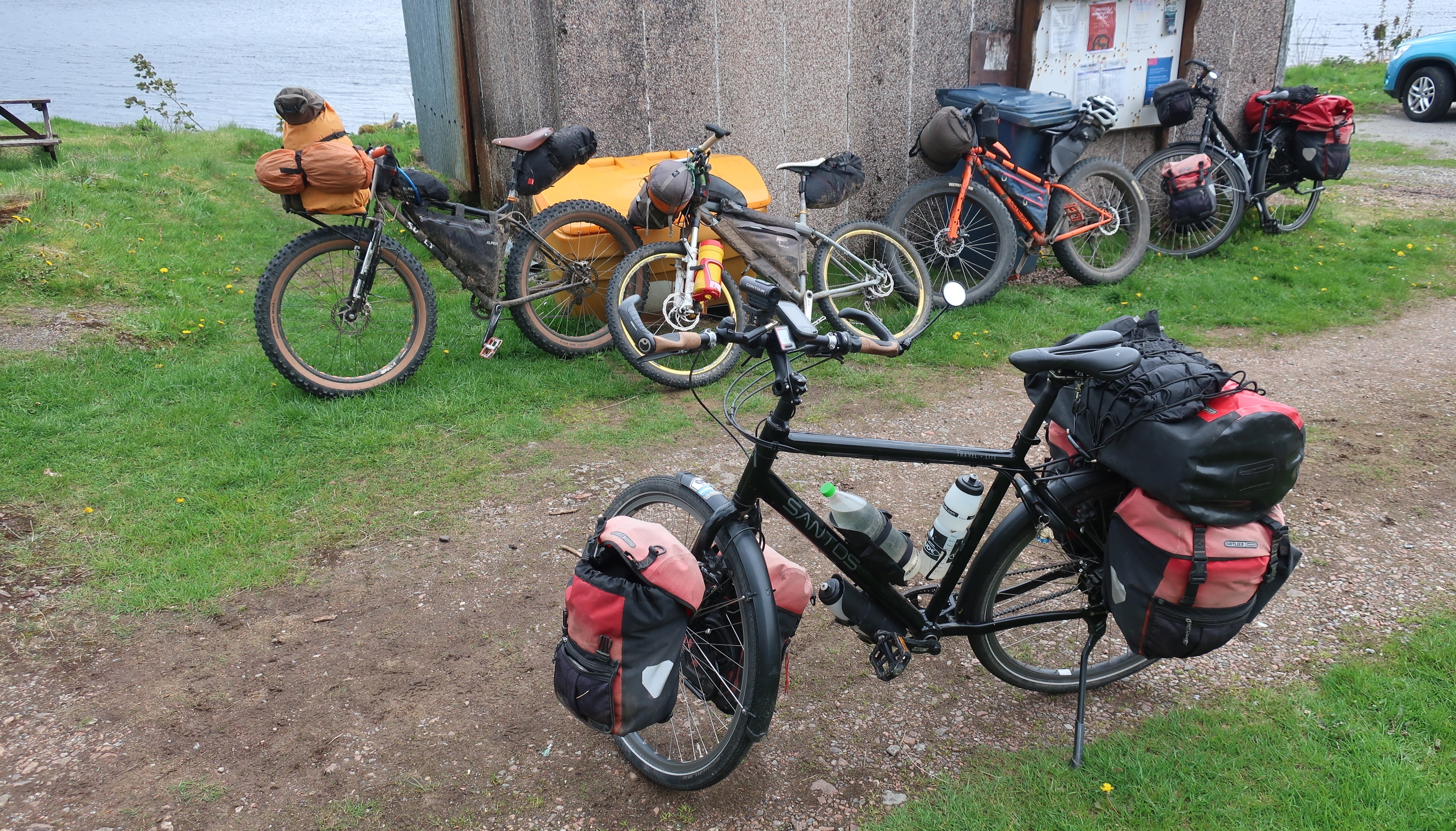 Waiting for the small ferry to Fort William

Fort William has all the services including a number of well stocked outdoor shops. After a pleasant day in town we cycled west on the A830 to the Mallaig – Skye ferry. All the ferries to the western isles of Scotland take bicycles for free.

For cyclists arriving on Skye it is good to know that the AA members only campsite at Ashaig will by exception also accept non member cyclists. As there are no other campsites nearby.We found the main road on Skye rather busy with camper vans and an endless stream of rental cars. The west coast (Struan, Ose and Dunvegan) was much quieter, the scenic road on the east coast (to Staffin) was very busy. The short but very steep climb to Quiraing pass was crowded with vehicles, the parking area on the top was overflowing. We descended to Uig to take the next ferry to North Uist. 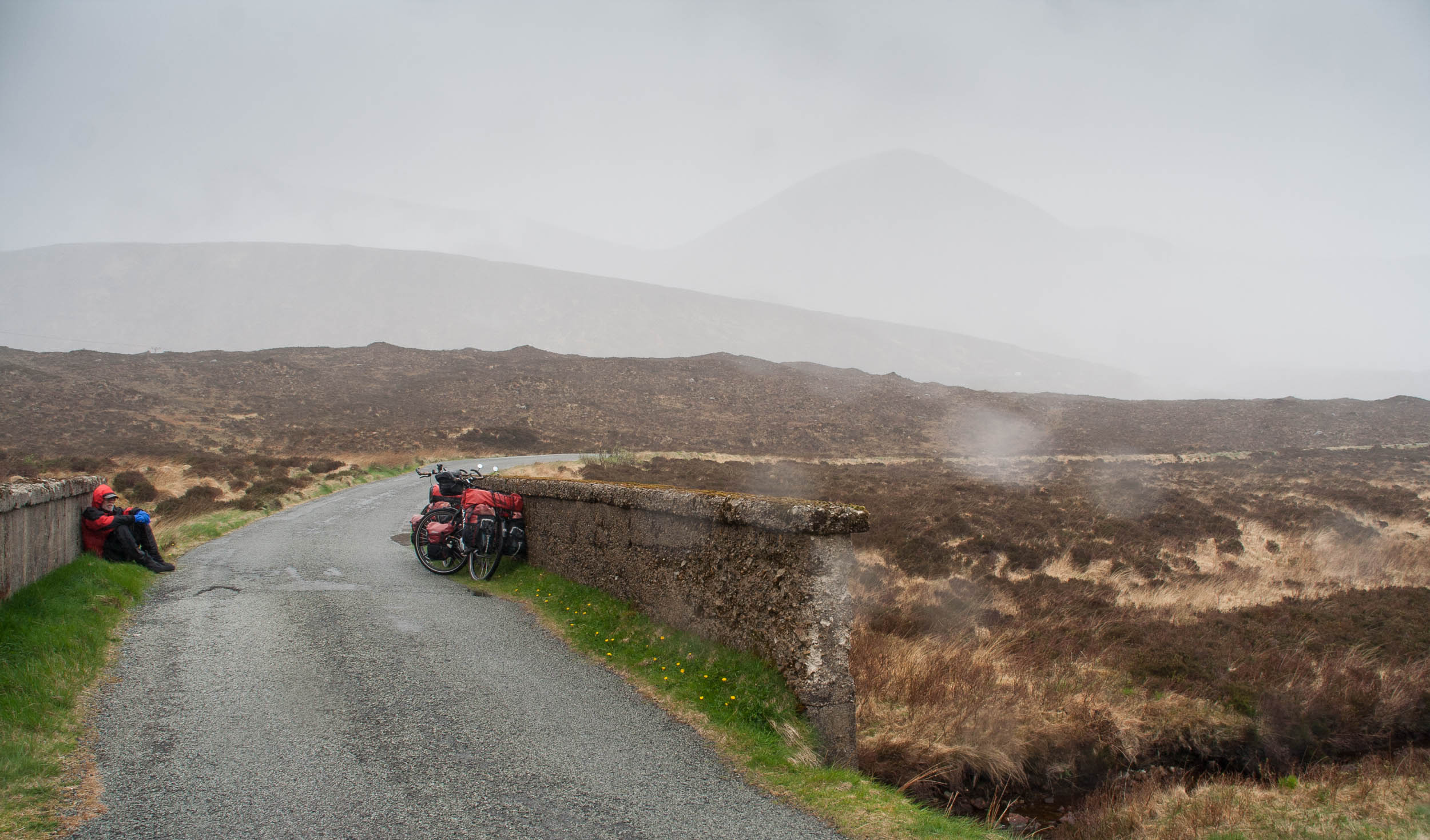 A very wet and windy day on Skye

Lovely views and weather on the east coast of Skye 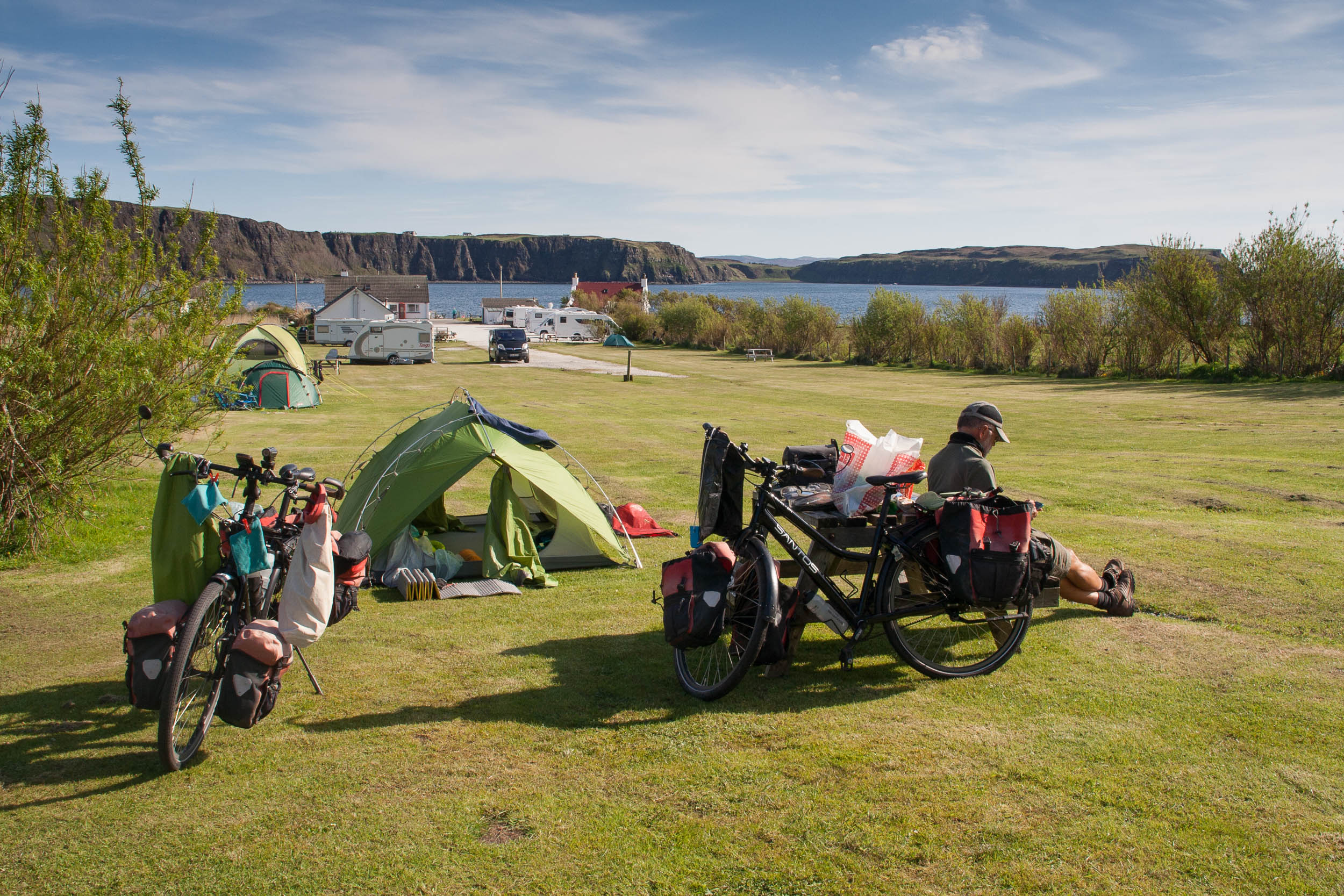 We spent just one day on North Uist. The island is flat and rather barren. We got off the ferry and cycled to the other side of the island where we camped one night. The next day we continued to the ferry for Lewis and Harris, the Hebredis islands further to the north. On the Outer Hebrides you’ll meet many other (British) cyclists as the bike route here  seems to be very popular.

The Outer Hebrides – Lewis and Harris

This island is just a short ferry trip to the north. Here you can take the eastern route (probably a bit quieter but with more steep hilly sections) or the western main road route. Bike route 780 follows that side. After a pleasant night camping we started the day with a good tailwind towards Tarbert with good hopes we would reach Stornoway that afternoon. This is the far north west of Europe and weather here can change from hour to hour. The wind changed to a fierce storm with wind gusts up to Beaufort 10! There was no way we could keep on cycling. We phoned a taxi to pick us up and bring us all the way to Stornoway. 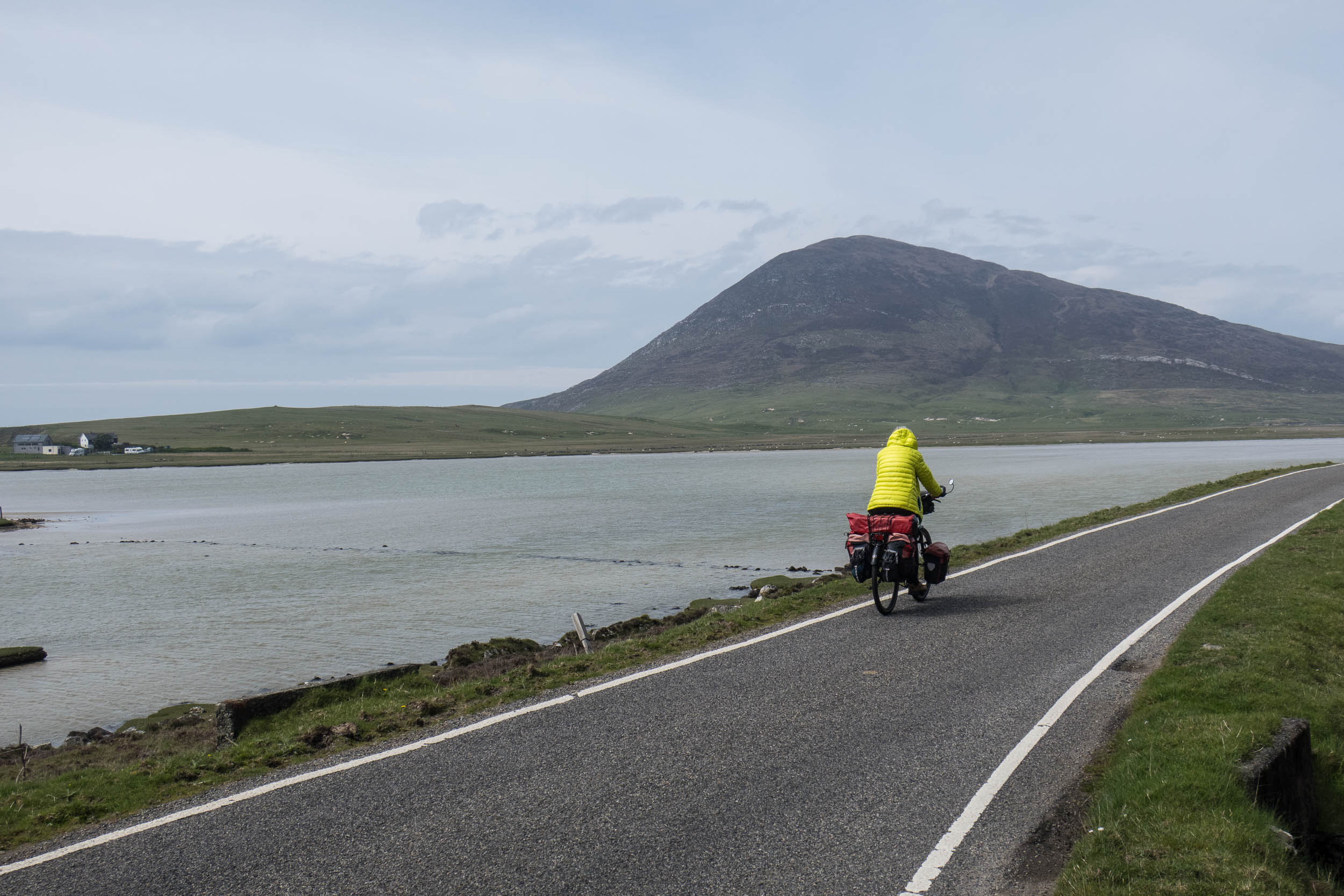 After a warm and pleasant stay in one of Stornoway’s B&B’s we made a day trip to the western side of the island to visit the famous Callanaish standing stones. Advised route: take the scenic and very quiet one-lane Pentland Road that crosses the island from west to east. Nice views of the countryside as well.

After again a (three hour) ferry trip back to the mainland we started cycling towards the north. The scenery here is very nice, the road not too busy. At Ledmore junction we turned towards the east. This is, again a single lane road, along beautiful Loch Borralan (motel accommodation and café).  At Inveran we were back on the NCN network, following bike route 7. At Tain we  took the western section of bike route 1 as the seasonal Cromarty ferry was not yet running.

Bike route 78 follows the famous Loch Ness. The rather narrow lakeside road can be crowded with tourist vehicles. At Foyers (shop, cafe) a steep climb starts that eventually ends after a very long climb along the Military Road. From the highest point it’s mostly downhill to Fort Augustus. We expected two campsites here: one had closed and the second one seemed to be under reconstruction.

South of Fort Augustus the route of the Caledonian Bikeway is mostly traffic free, following paths along a canal and lakes. The paths are unpaved and can be rough going. Fort William was our next stop.

Having started this trip without a detailed planned route (as is usual for us) we had discovered that we were running out of time. We solved that problem by taking two train trips. One from Fort William to Rannoch and a second from Edinburgh to Newcastle. The first train trip would bring us to the scenic Highlands east of Fort William at the end of the dead end road to Rannoch. Cycling along Loch Rannoch we could then reach bike route 7 and follow that to Edinburgh. From Edinburgh there are regular trains all the way to Newcastle and further. 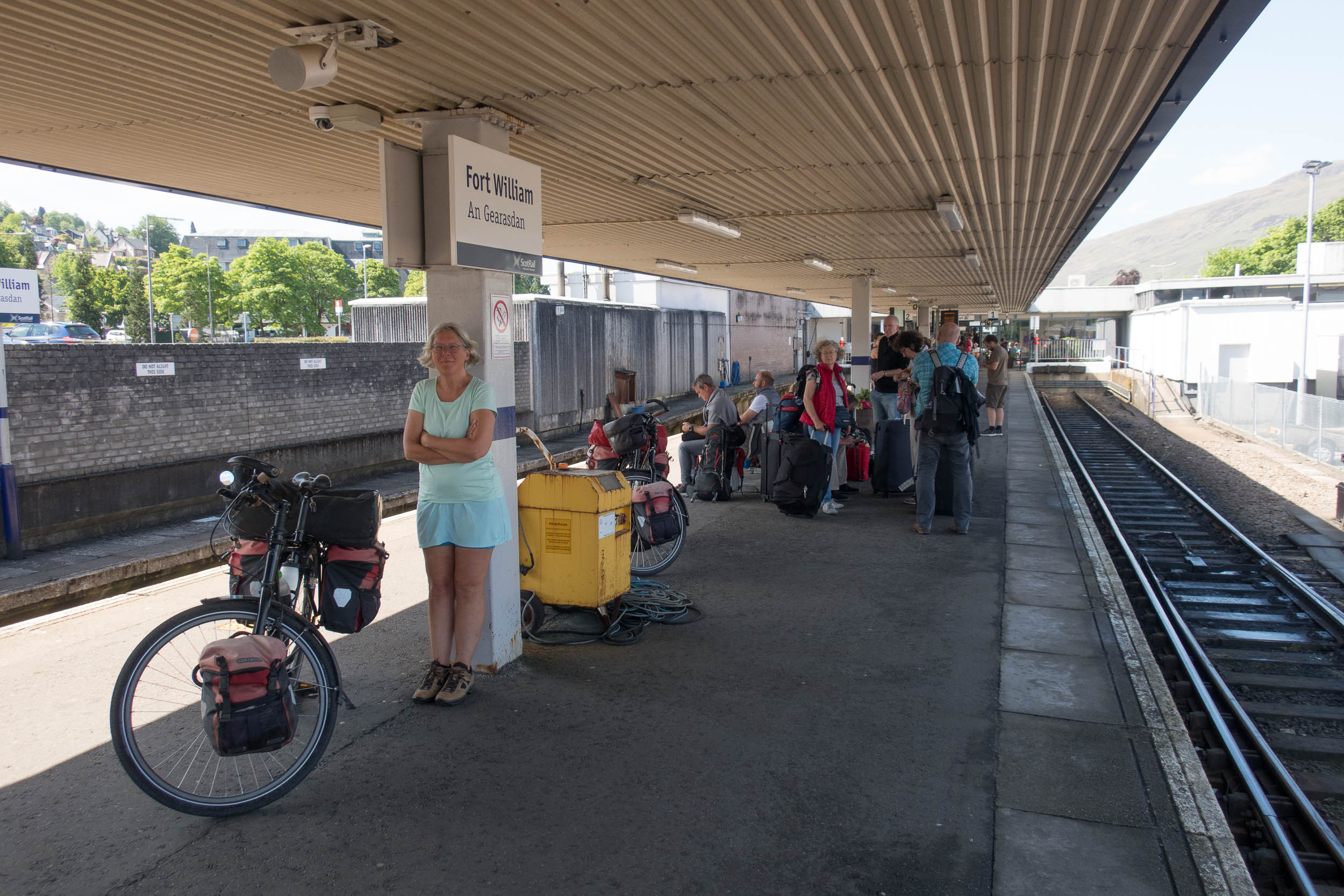 The train trip to Rannoch is very scenic and takes about one hour. Be sure to have a reservation for your bike. We cycled east on a good and quiet road. Near Pitlochry (very touristy) we joined bike route 7 riding it south all the way to Edinburgh. Although the mountains of the Scottish Highlands dissapear the route still has some steep hills. 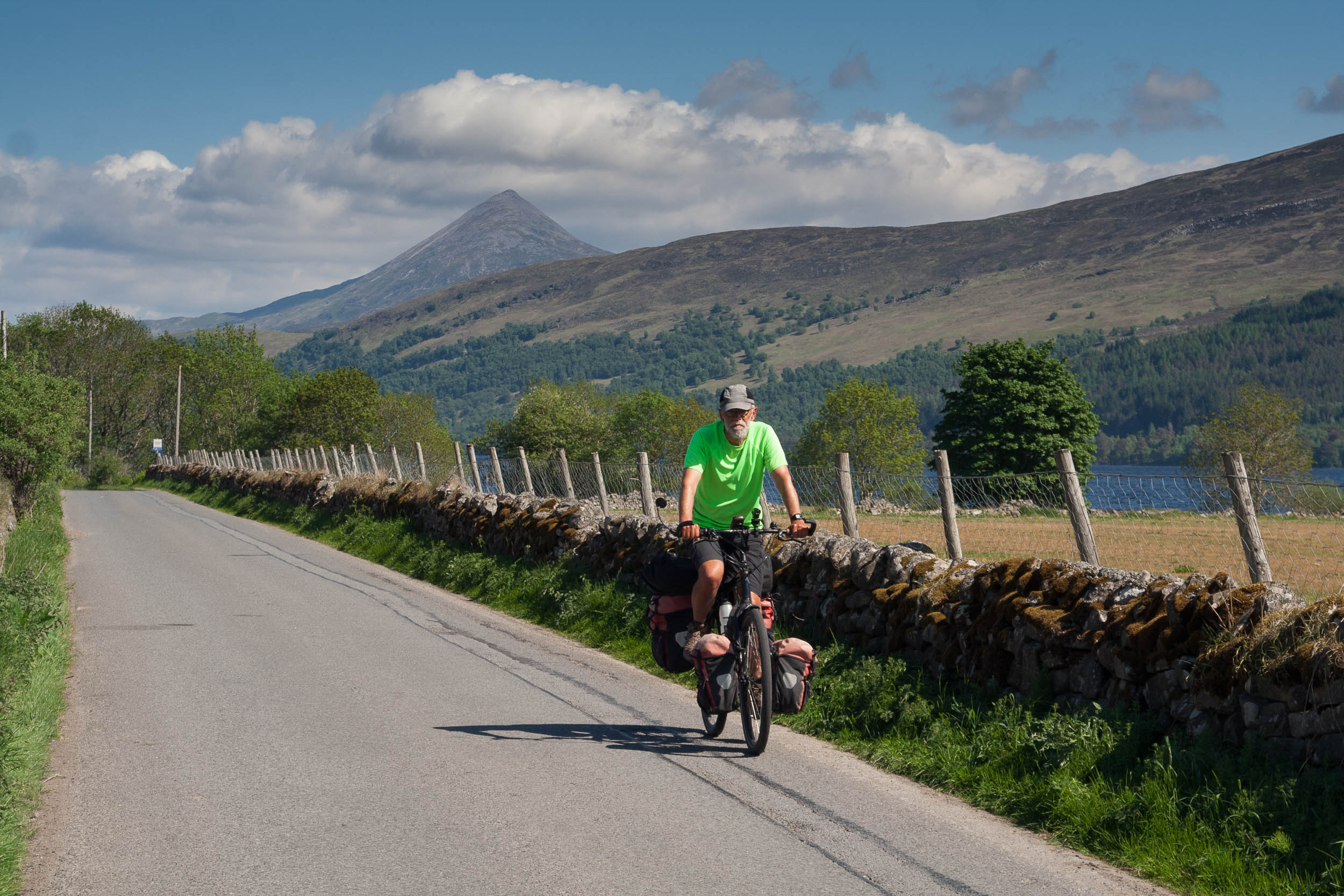 After a day of sight seeing in Edinburgh we took the train to Newcastle and a day later boarded the ferry to IJmuiden (Amsterdam). 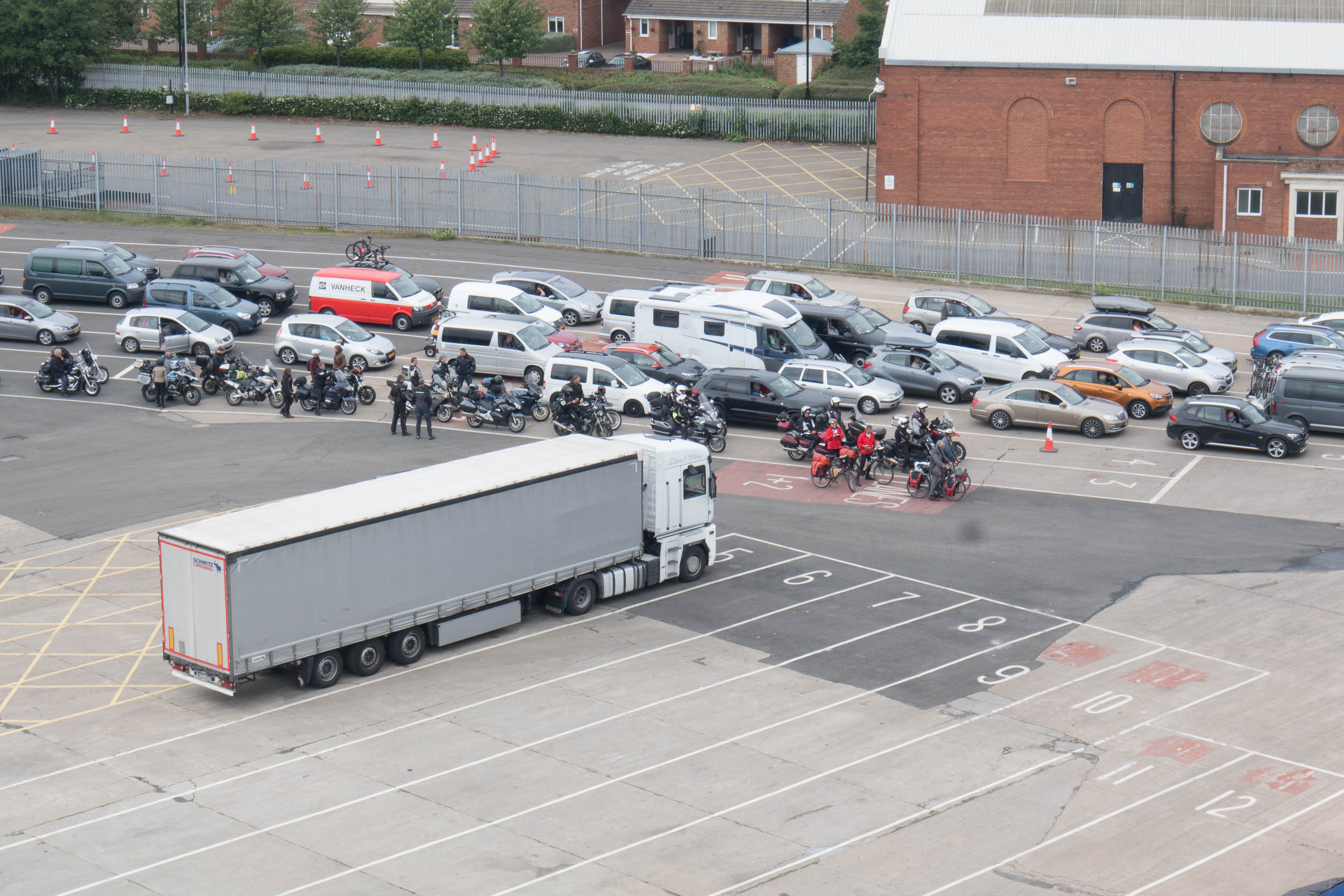 Cyclists waiting for the Newcastle ferry to Amsterdam