We used a printed map for overview but mostly relied on the Open Street Map on our Garmin Oregon GPS and occasionally the OSmand, off-line map app on an Android smartphone. To prepare our trip we used Google Maps and Google Earth.

As we were visiting six countries on this trip we encountered a multitude of languages. Many people also speak some English or German. Occasionally we used Google Translate.

Before we started this trip we expected a lot of mad high speed drivers overtaking cyclists with less than a minimal distance. The contrary was true: in all countries car drivers and truck drivers were very considerate. Often waiting behind us to for a good moment to overtake. An important factor was, without doubt, our mission to follow small road where ever possible.

We used four ferries: the the Lepetani – Kamenari car ferry in Montenegro, the Fierzë – Komani car ferry in Albania, the ferry from Cavtat to Dubrovnik and the ferry from Split to Slatine, both in Croatia. Using the two last ferries with a bicycle may not be allowed in high season, depending on how busy it is. More details about these ferries are on the route page. There also is a ferry running from Split Airport directly to Split City but we we don’t know if it’s possible to take bicycles on this boat. 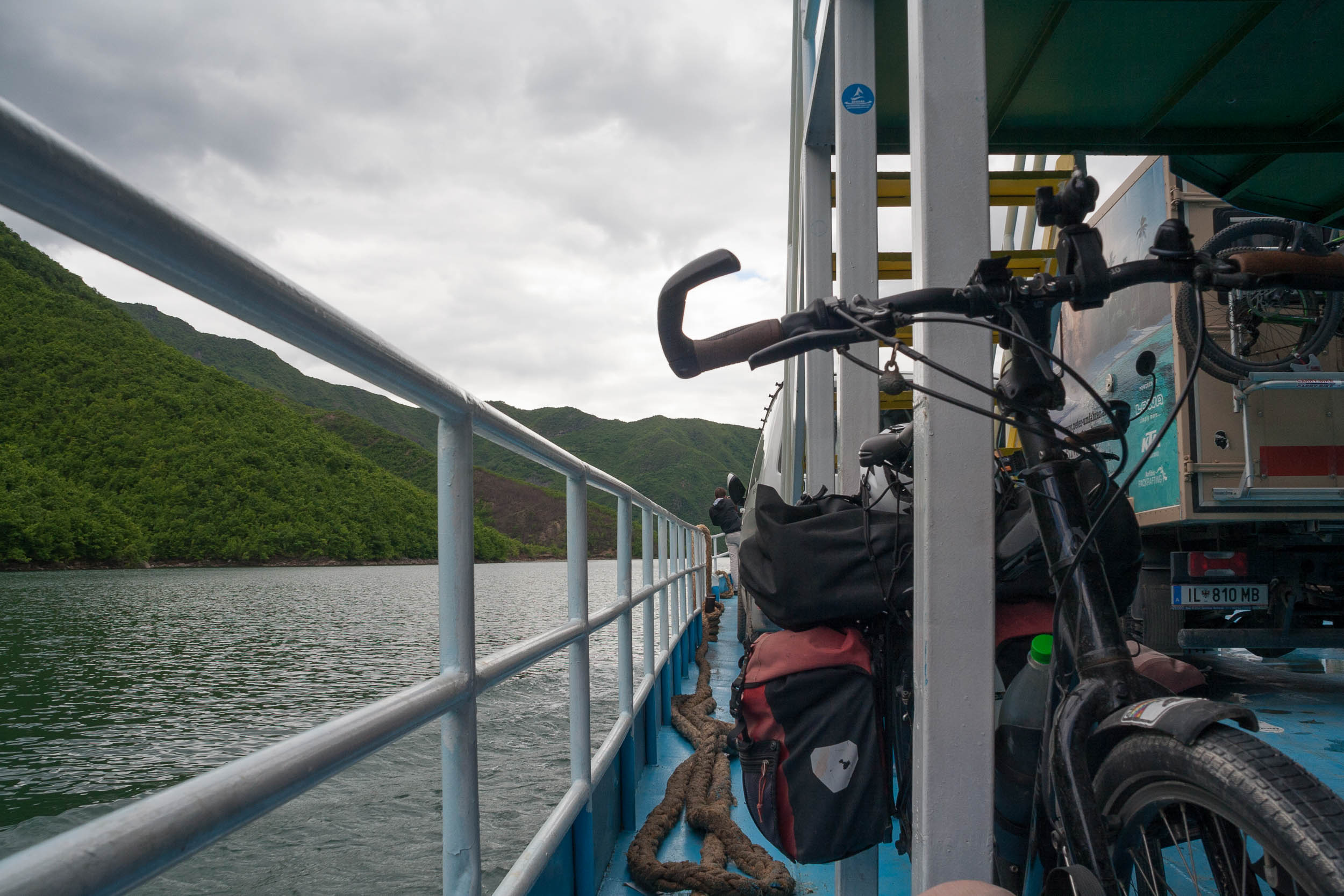 Bike on the Fierzë to Komani car ferry. There also is a smaller boat that takes bicycles.

In larger cities tap water seemed to be safe (as it was treated). We carried a water filter but rarely used it. Water in bottles is widely available. 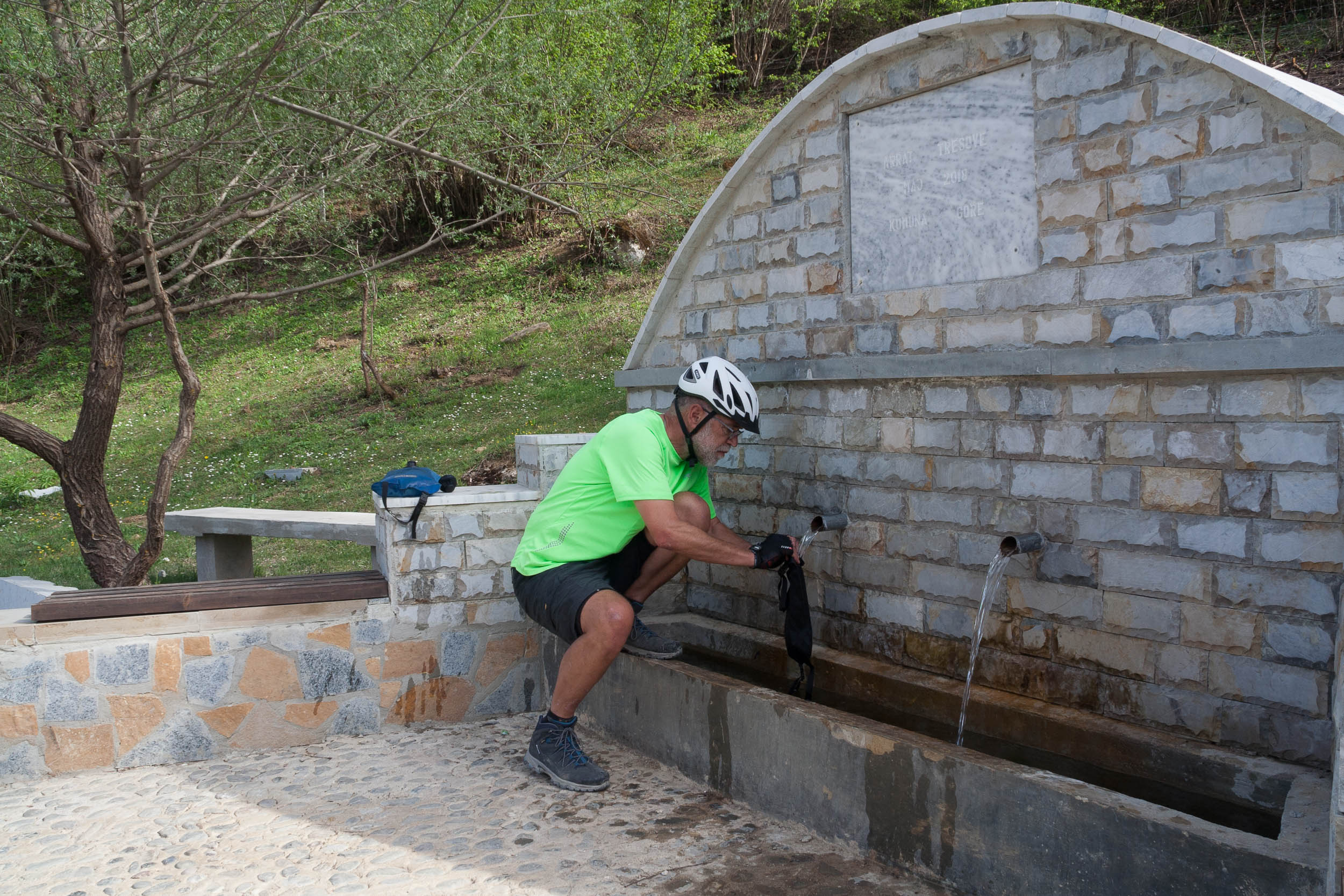 getting water from a local well in the Albanian mountains

Markets and supermarkets are everywhere. For the self catering cyclist there is enough to find. Eating out almost always means pizza or similar Italian dishes. 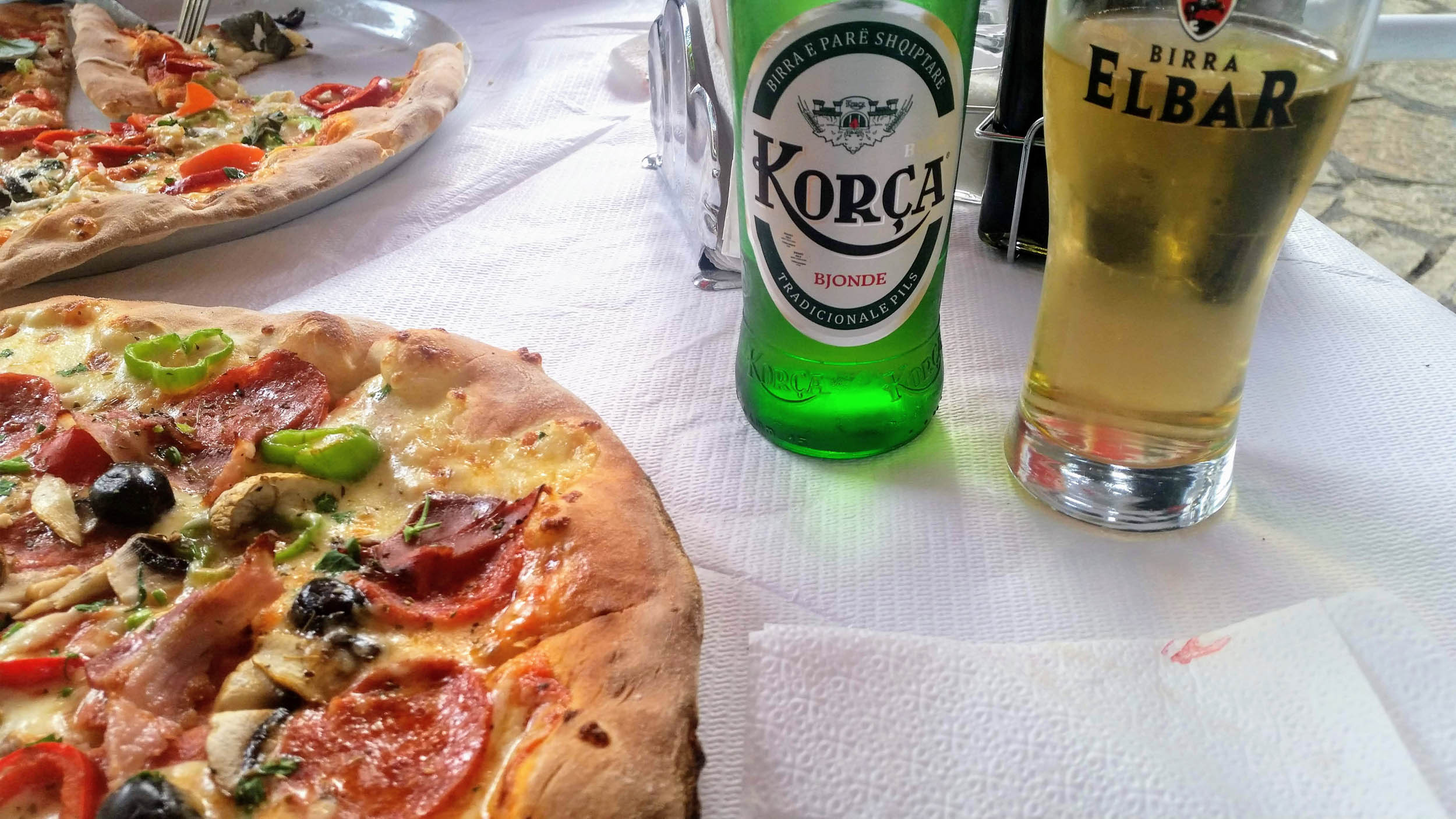 Local pizza with a local beer

We planned this trip in spring expecting mild temperatures ranging from 20 – 30 degrees Celsius. Unfortunately it was one of the coldest and wettest springtime since meteorological registration began. Most days were far below 20 degrees, often we  had a few hours of rain. Nights were cool (2 degrees in the Albanian mountains) and skies almost always cloudy. We have had less than five days with warmer weather (above 25 degrees). 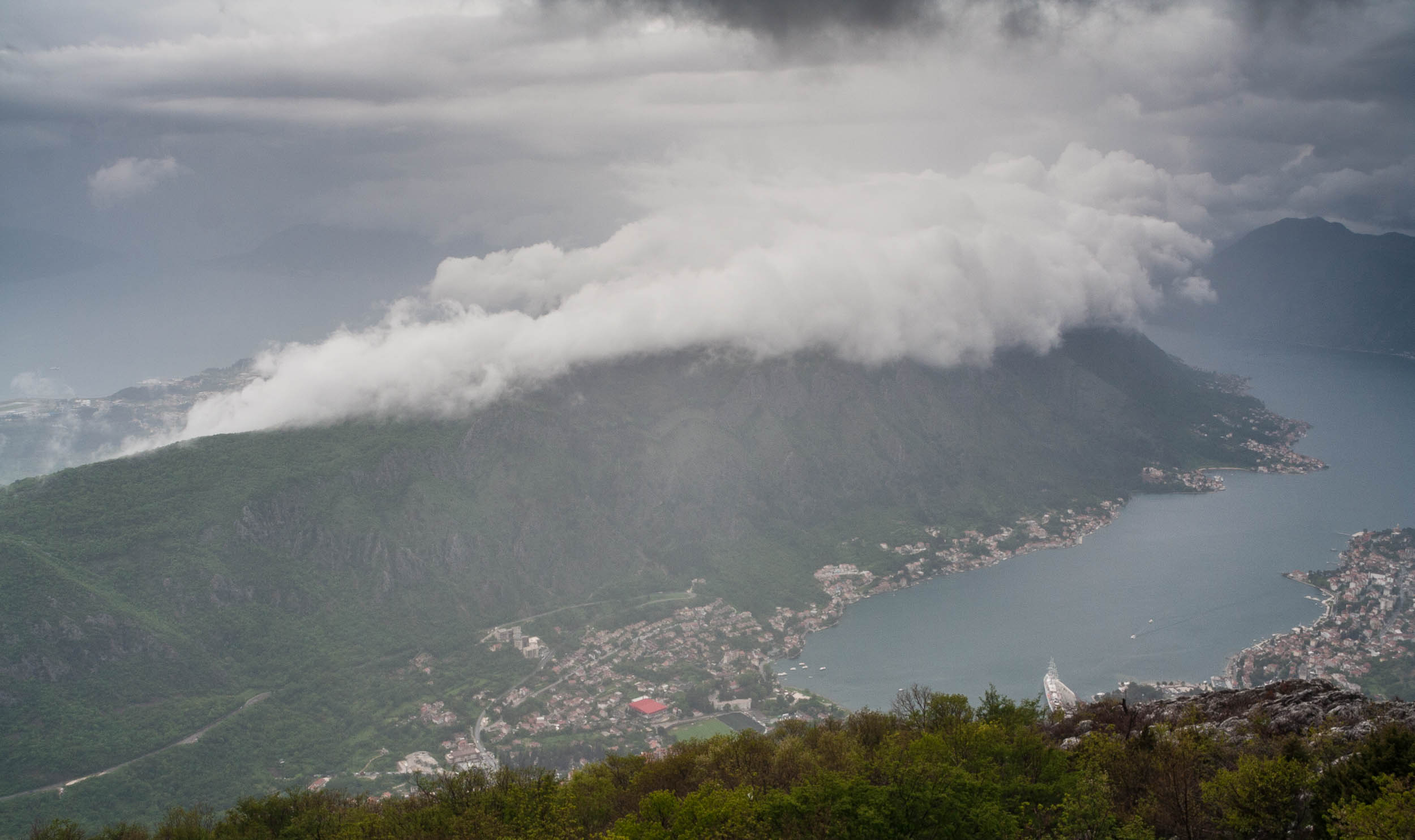 Dark skies and heavy rain showers over the bay of Kotor (Montenegro). It was a cool day with 8 degrees.

There are hotels everywhere but in most countries it’s better value to find an apartment. Signs for apartments (with kitchen, bedroom, balcony etc) are everywhere. They typically cost 30-40 euro a night) . Campsites are concentrated along the Adriatic coast. We did a lot of free camping which is easy and hassle free. 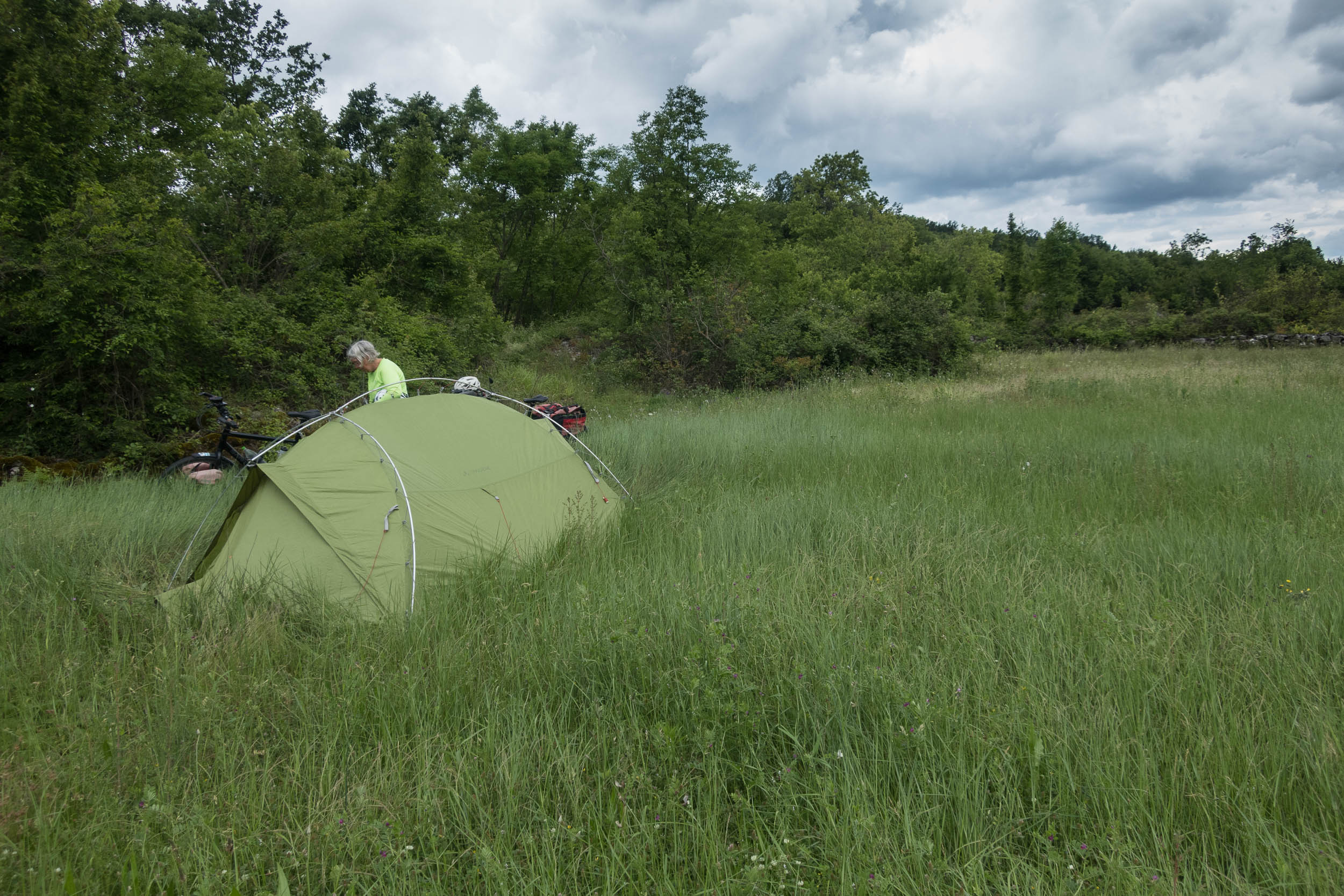 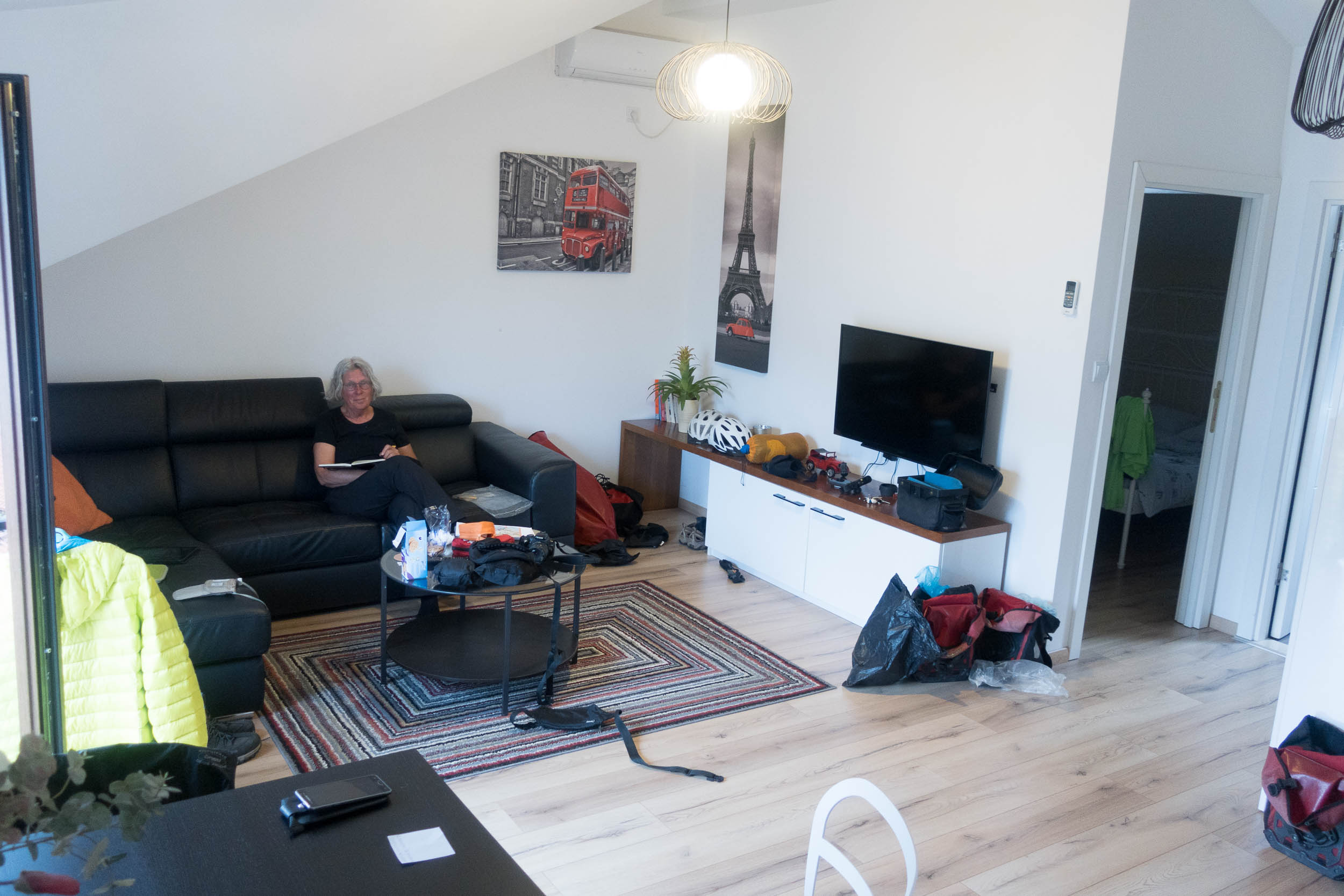