Uganda – cycling in the National Parks

All information on these pages is based in our personal experiences while cycling through Uganda in September and October 2007. This page covers all the details about cycling in some Ugandas national parks we visited.

We passed through or visited Queen Elizabeth NP, Lake Mburo NP and Murchinson Falls NP. All of these parks are more or less accesible for cyclists.

Several roads lead into the park. The main access road is the so called Katwe road, branching off the main highway just south of the equator. This is the road for cycling visitors. The Katwe road is dusty and bumpy all the 17 km to the Main Gate. Another 7 km of dirt follow to Mweya were all the facilities are.

The second entru point is at Katunguru. Entering through this gate is not possible for cyclists due to the high number of elephants and lions.

Another possibility is the road south to Ishasa. This is a public road leading all the way through the park. Cycling is permitted. We met two cyclists who had done it and enjoyed it. 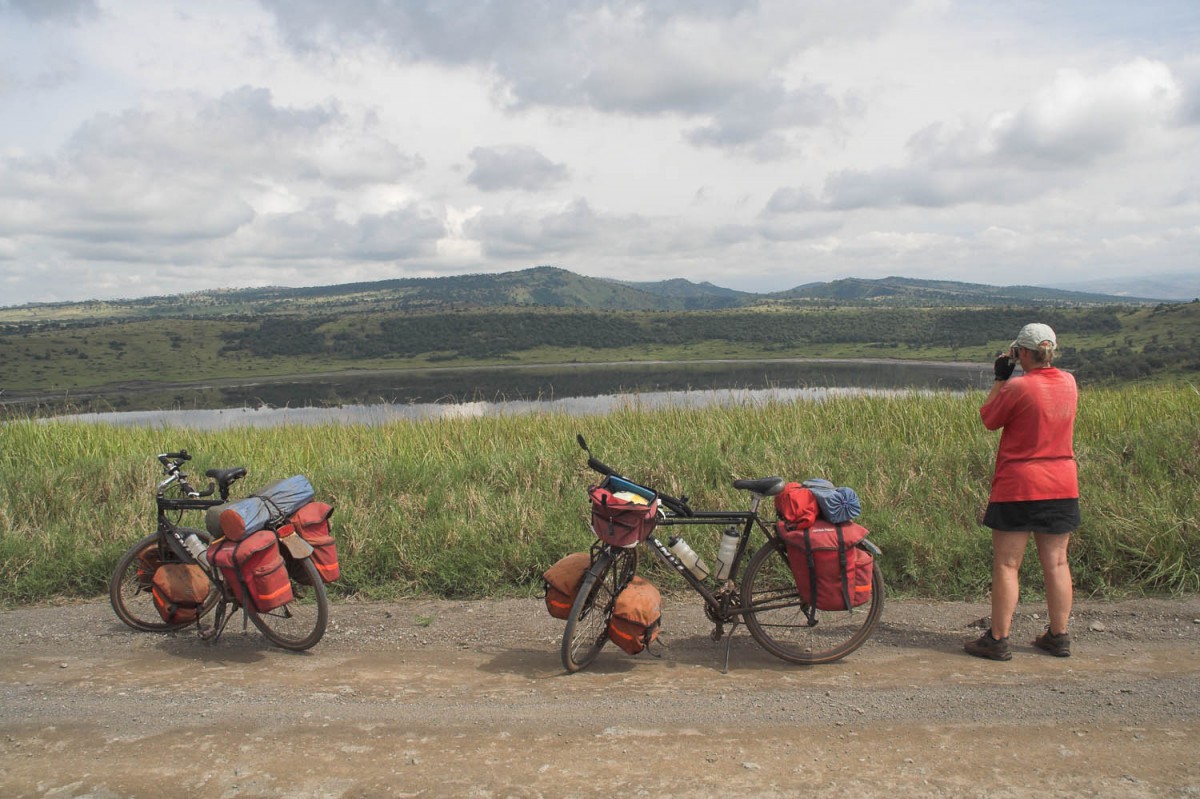 along the Katwe road, spotting buffaloes 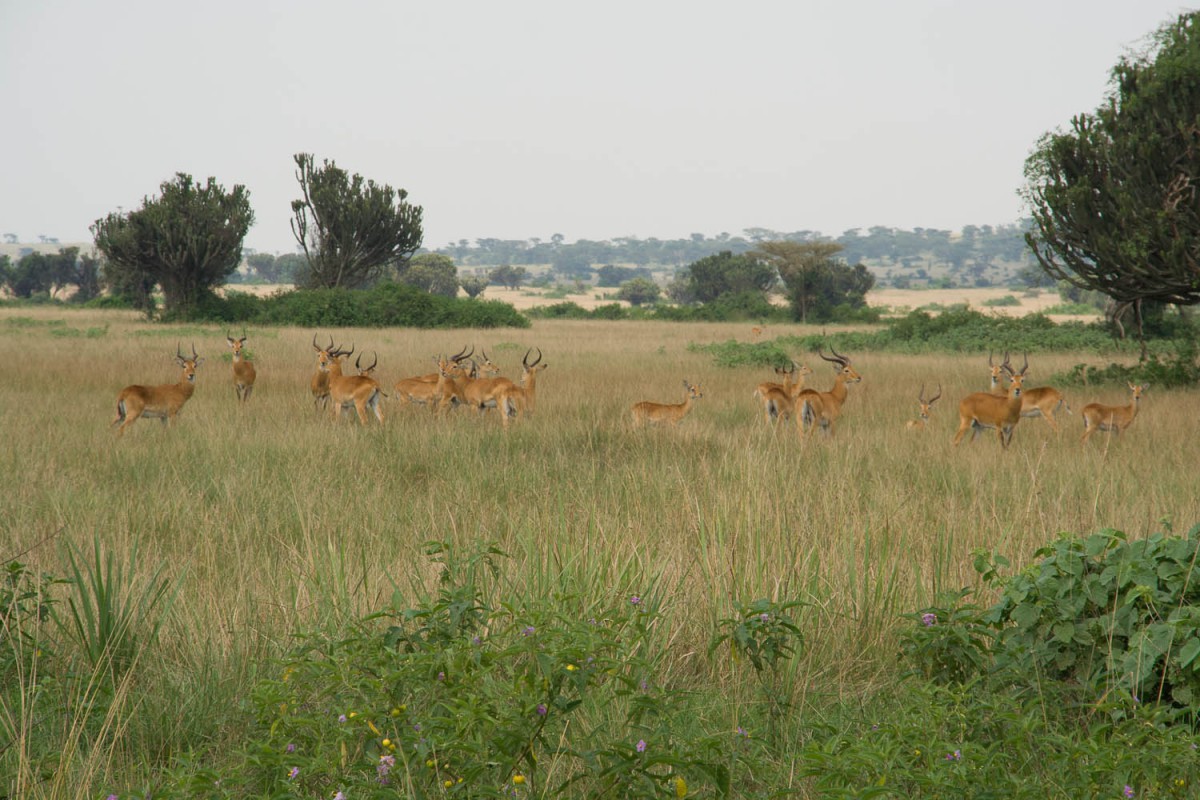 impala’s from the main road 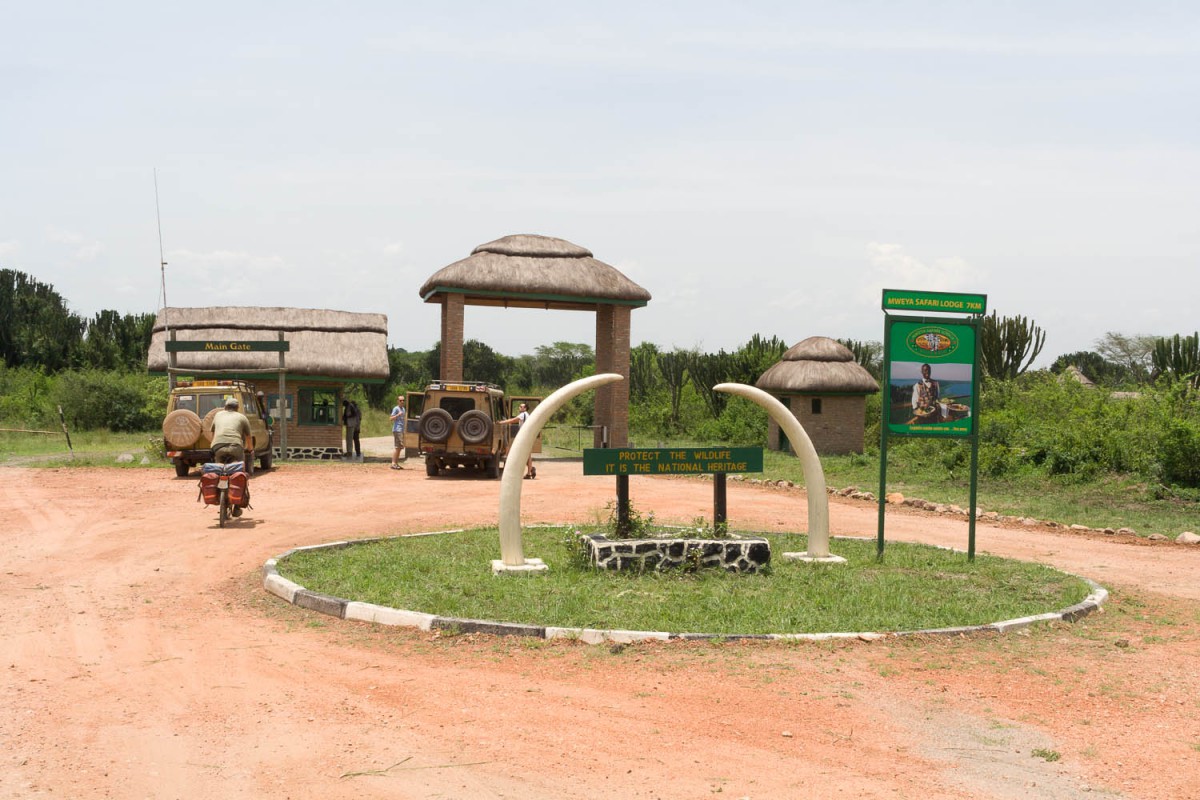 Lake Mburo NP is one of the few National Parks where cyclists are allowed to ride their bikes everywhere because there are no animals such as lions or elephants. But there are plenty of potentially dangerous buffaloes so it’s a good idea to keep an eye open for these guys while biking through the park. At the end of the day you may also encounter hippo’s; these animals can travel as far 3-4 km’s from the lake. 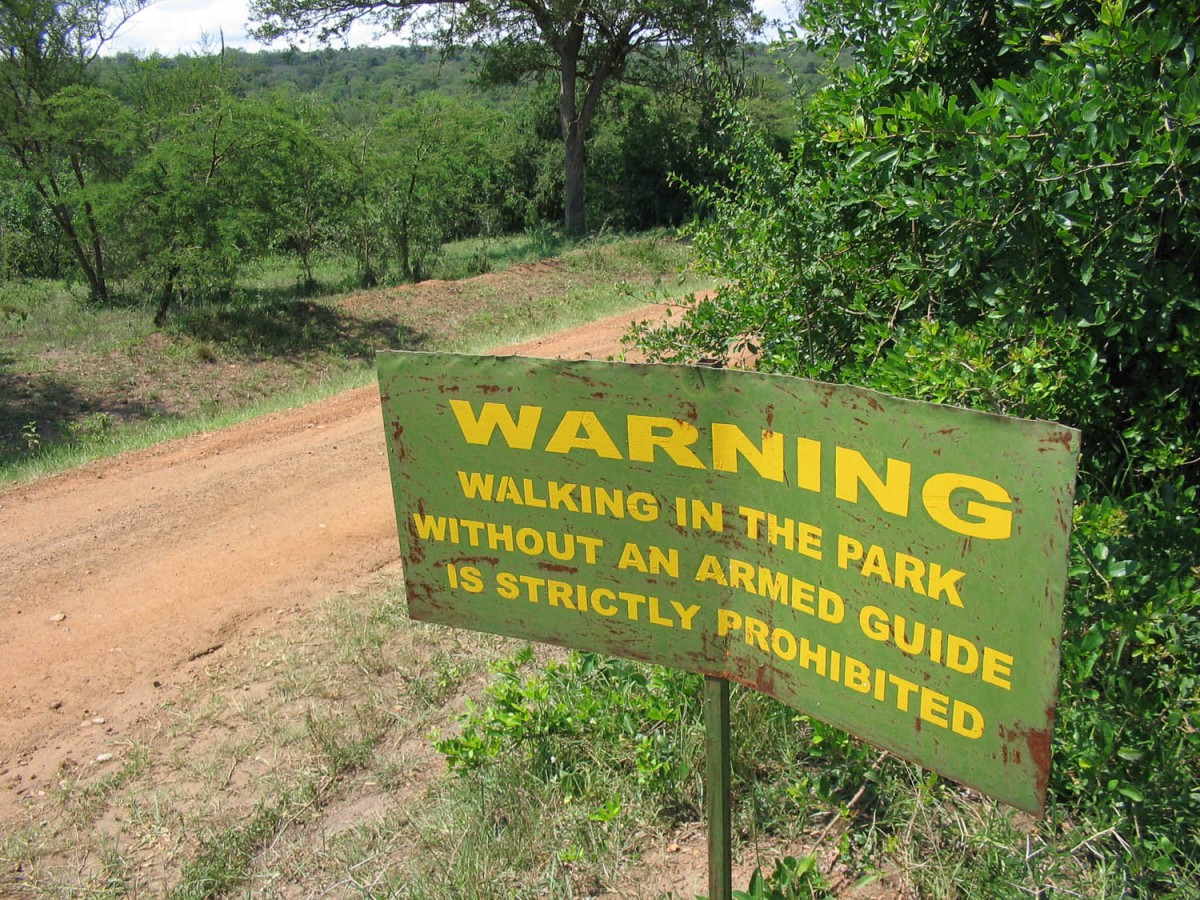 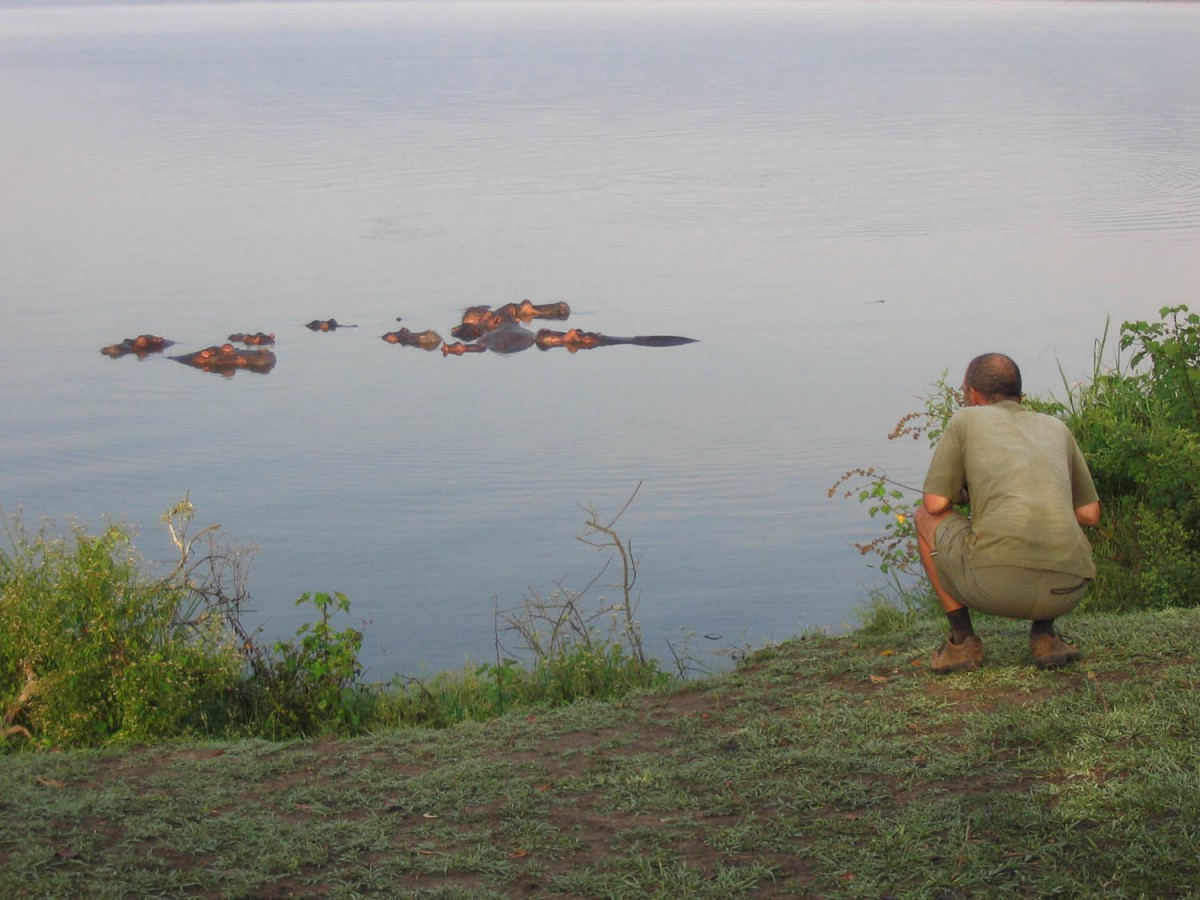 hippos near the campsite

The main roads in the park are in a good condition. The tracks in the park can be narrow, bumpy and dusty. We cycled from the Sanga main gate to the campsite at the lake and did one trip by bike to the Kazuma Hill Lookout.

A close encounter with buffaloes

During that last trip to the lookout we had a close encounter with a herd of buffaloes. While we were cycling along one of the tracks we suddenly spotted a herd of about 15 buffaloes resting in the shade about 150 m away. When they saw us, they jumped to their feet and quickly started moving towards us. We were not sure what their intentions were, so we opted for a speedy retreat. Later we learned that the buffaloes probably were only curious. As only single buffaloes are reputedly dangerous. The next day we took a taxi to get out of the park.

We did not travel by bike to and through Murchinson Falls NP but visited it on a 3-day safari trip by car from Kampala. While preparing our Uganda trip we had read on the internet mixed reports about cyclists travelling to and through this park. We tried to check to cycling conditions during our safari trip.

Rangers told us that it probably is allowed to cycle as far as the Paraa ferry into the park. South of the river the concentrations of wildlife are low, we did not spot any animals here, nor did we see tracks etc. The same ranger also told us that it will depend on the man at the gate whether you get permission to bike in, or not.

The dirt road north from Masindi is easy to cycle all the way to the restcamp at the river (80 km) . The first half is on a public road, the remaining 40 kms are through the park.

There is a western route to the Bugungu gate, that brings you closer to Paraa. 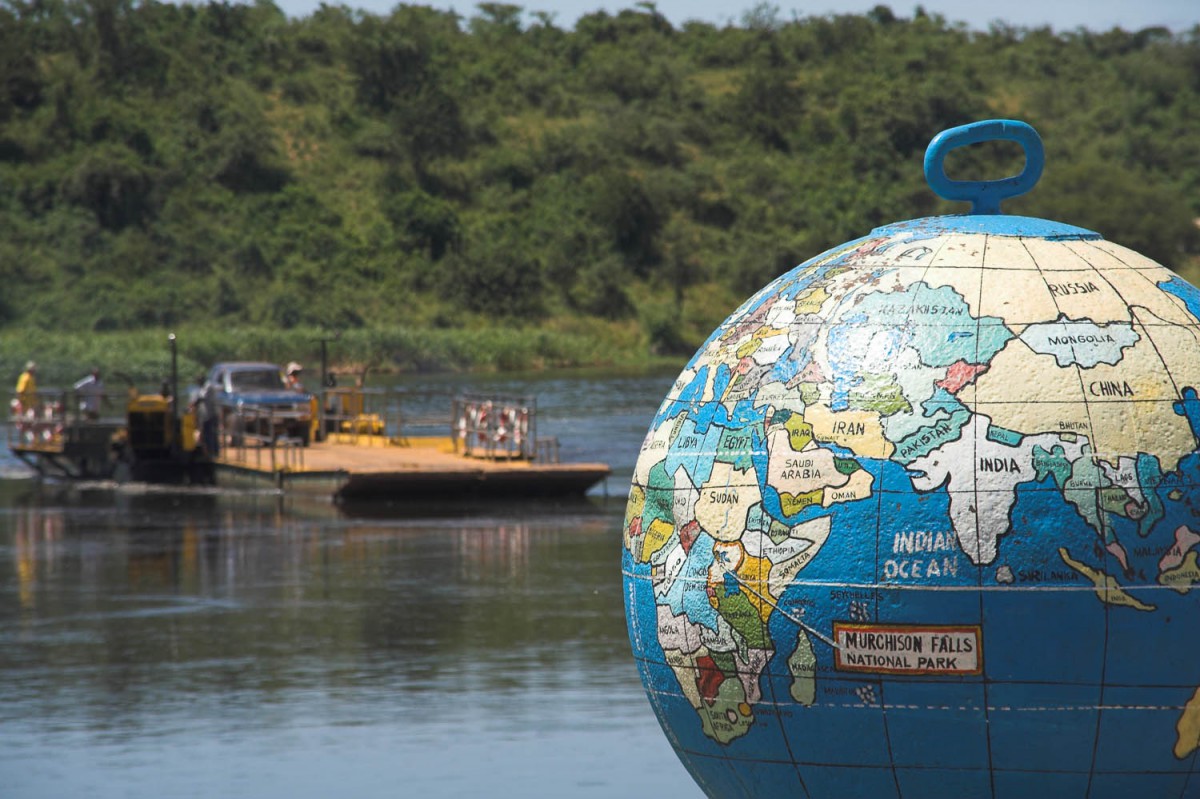