On these pages you’ll find the information you need for a bicycle-trip around the island of Sri Lanka. We’ve included information about maps, accommodation and routes. And a detailed description of the route we followed.

We’ve made this trip in September and October 2004. Starting in Negombo and traveling clock-wise around the island for 1200 kilometers.

The East Coast, is it safe?

Although many governments advise travellers to avoid this area we encountered no difficulties. People were friendly, and at the heavily guarded checkpoints, police and military just waved us through. But it is obvious that tension still prevails in this area.

You may see clearly marked mine fields along some of the roads. Mine fields, laid out in a military defensive way, also surround army camps and checkpoints. 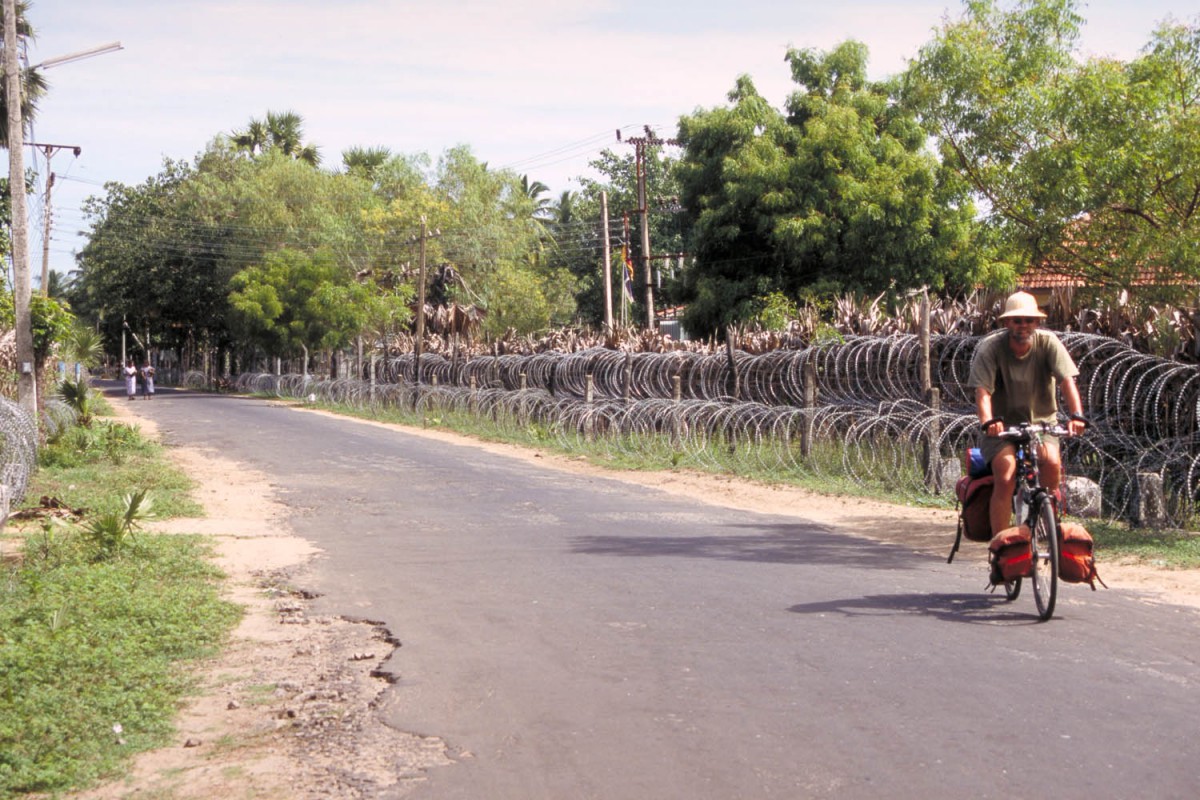 The 1:450.000 Sri Lanka map by Nelles Maps is a good overall map of the country with relief shading. The map gives road numbers and distances but both were often less than accurate.

We used the well-known Lonely Planet travel guide for general travel information. Get an up-to-date edition as tourism expands quickly in Sri Lanka.

The main highways, e.g. the Colombo Kandy road, are well paved and wide. These main roads tend to be very busy, full with speeding trucks, busses and cars.

Sri Lanka also has an well developed network of secondary roads. Most of these are quiet but narrow and bumpy. Signposting on secundary roads is less developed; you may have to ask for directions more than once.

Of all traffic, the brightly painted private busses are most dangerous. These drivers drive like madmen. Watch out.

Sri Lanka seems to be a popular biking destination. We met several other cyclists, all of them Dutch. There are plenty of possibilities to book an organised biketour.

Most roads do not have a shoulder (small strip on both sides separated by a line). Traffic is on the left hand side of the road. 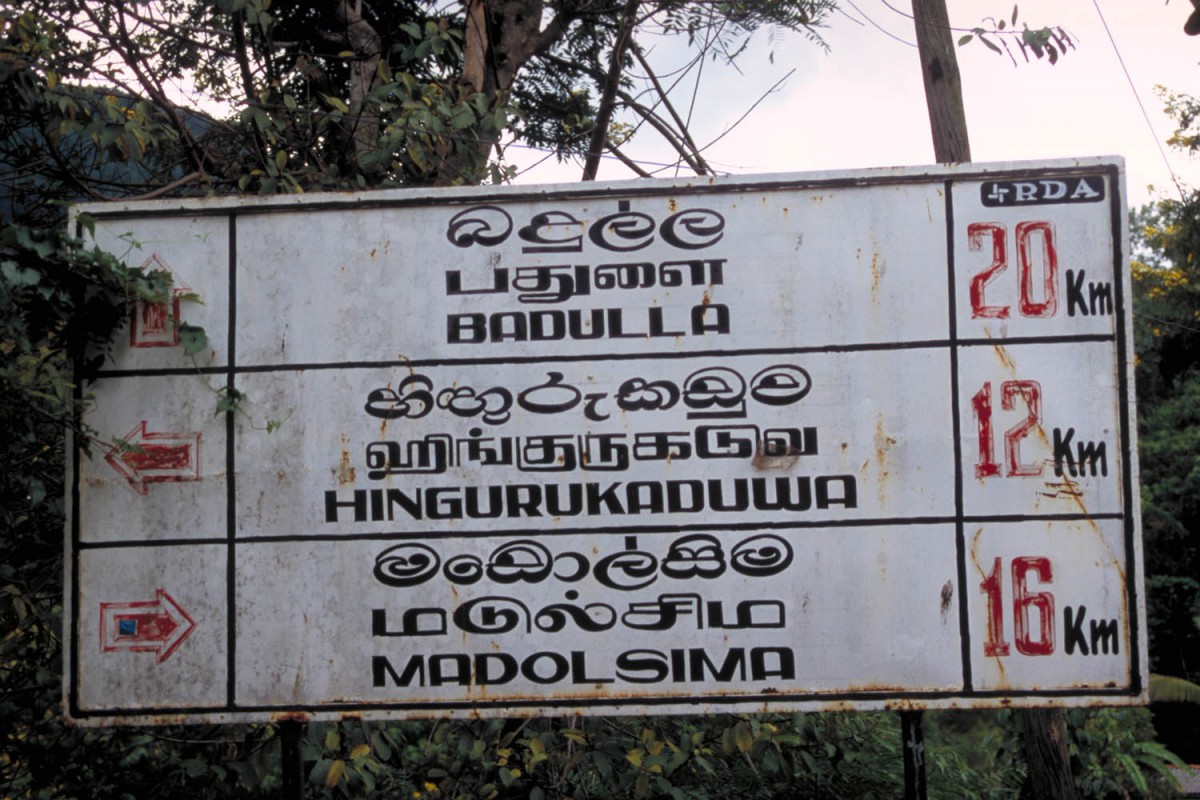 Outside major towns not much is available to repair a broken bike. To get the essential part you may have to go a long way.

Even the smallest village will have a few minuscule shops selling items like bananas, coconuts, bread etc. In most villages bottled drinking water is for sale. Every hotel and guesthouse will have it’s own restaurant. Try Sri Lankas famous “rice and curry” dishes.

We visited Sri Lanka from September 19th to October 16th. The west-coast rainy season had started 3 weeks earlier than expected so we had several moments of heavy rain. Once on the east coast the weather was better.

Most of the days it was partly cloudy with temperatures hovering around 30 degrees Celsius.

Nights were hot in the lowlands and pleasantly cool in the higher areas such as Ella, Kandy and Nuwara Eliya. 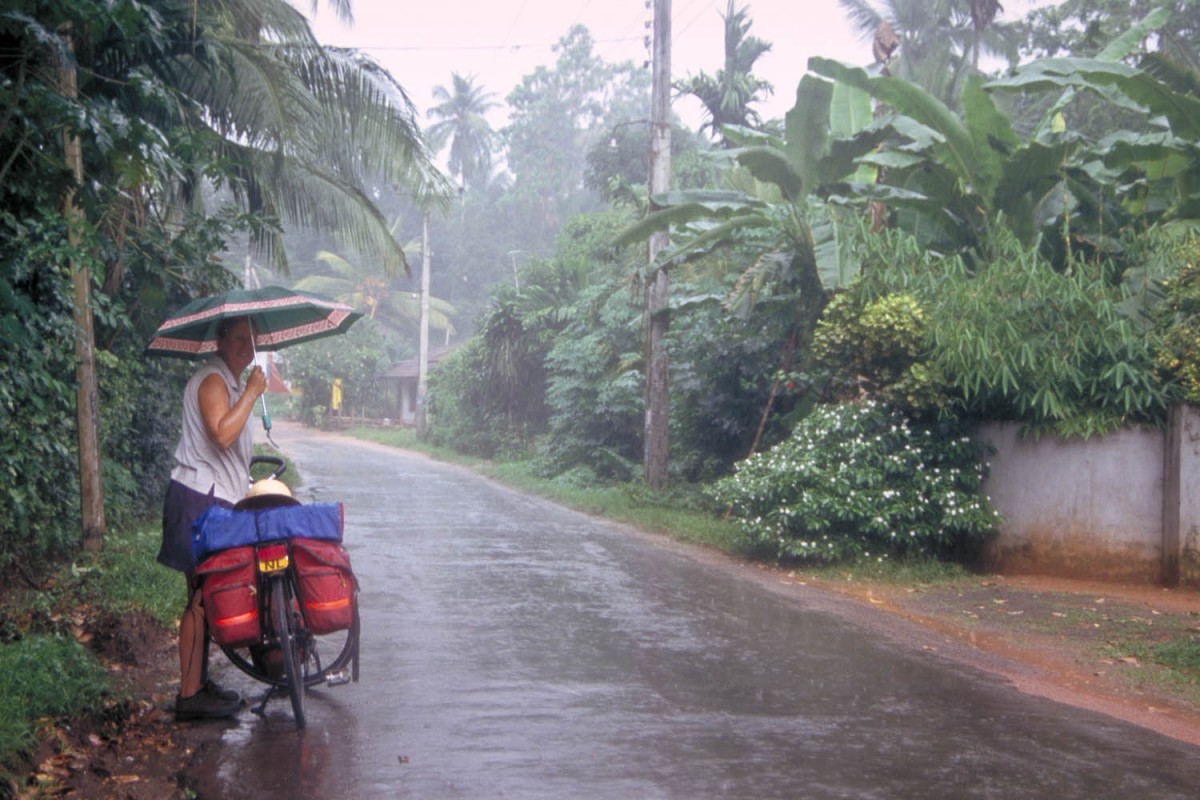 we hit a bit of rainy season

Some of Sri Lanka’s main roads lead through National Parks. You may see elephants along the road. Monkey’s and numerous species of brightly coloured birds can often be spotted. 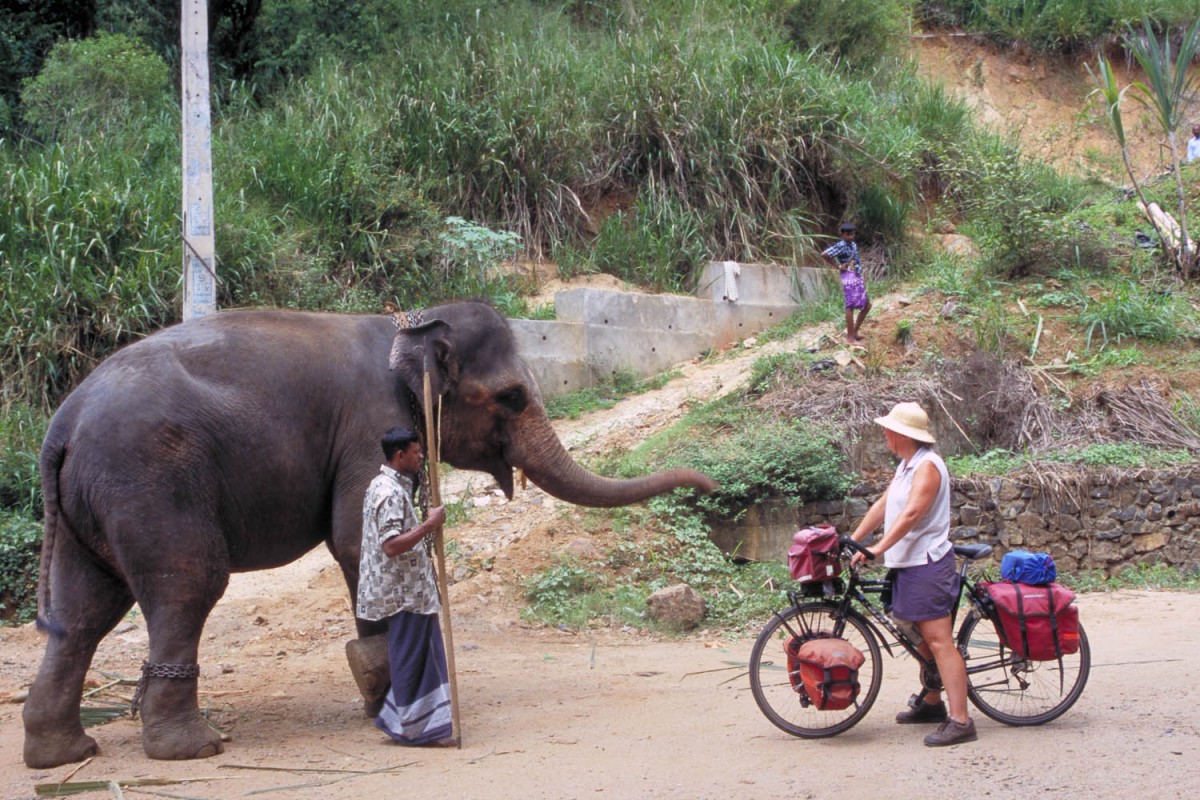 We were able to find accommodation in every town we stopped. Government run Resthouses (some of them now run by private companies) proved to be an excellent option.

Not all cheap places may have (good) mosquito nets; we brought a lightweight one and used it a couple of times.