Our route in Arizona

Tour report of a 1994 trip through Arizona. From Phoenix we cycled north to the high area of the Mogollon Rim and then south into the direction of the Mexican border.

University Drive is a good option to leave Phoenix in eastern direction. Continue straight and you will reach Apache Junction. Just outside Apache Junction, on the road to Globe is a KOA campsite with all facilities.

This route is especially busy during the weekends. Many inhabitants of Phoenix, owning a speedboat, drive down to the lake on Saturday and return home on Sunday. Just before Tortilla Flat is a steep climb. You can camp at Tortilla Flat. After T.F. the road continues to climb and Apache Lake appears after some time deep down below: if you want to camp here you’ll have to ride down a steep descent. It is only 1,5 km, but the next day you may have to walk out again.

The dirt road is in reasonable condition. About 10 km after the Apache Lake Campground is the Burnt Corral Campground. The undulating road crosses numerous creeks.

We enjoyed the trip to Tonto National Monument, the place of Indian ruins. It is 2 km from the turnoff and another 1,5 km of climbing to the monument itself. It’s worth a visit!

The paved road along the Roosevelt Lake is almost level and in excellent condition. There are several campgrounds along the shore. Most of them are quite primitive (no drinking water or showers). The Cholla campground is different: hot showers, drinking water and covered picnic tables at all sites.

The first part along the lake is almost level; it’s followed by a short climb to the watershed just before Jakes Corner. In J.C. is a small shop. You ‘ll reach highway 87, 4 lanes and a wide shoulder. After the small village of Rye (restaurant but no shops) follows a 10 km long and very steep climb. The last kilometres you’ll cycle in the forest.

You start with a 5 km long descent out of Payson. Then 20 kms to Kohls Ranch (restaurant only) on road without shoulder. This part is quite busy. After Christopher Creek  there are some more kilometres of narrow road, but after that it’s all 4 lanes.

When in the distance the Mogollon Rim appears, the real climbing starts. At the top, Woods Canyon Lake can be reached after an 8 kilometres long level road. There is a shop, open until into the low season. When you continue on the main road it is level all the way to Canyon Point Campground (8 km from the turnoff to Woods Canyon Lake). Unfortunately the road is quite narrow with a lot of traffic. You are descending all the way to Heber. Heber has a shop and motel, but no camping possibilities. Almost all the traffic continues into the direction of Holbrook. Just before the village of Overgaard is a nice park (drinking water, toilets, picnic tables). It’s a perfect camping spot, but officially it is not allowed. On the way to Show Low ( you keep descending) you ‘ll pass Clay Springs (a few kilometres off the US 260) and Linden (shop). Show Low has all amenities. The campground signposted in the town’s centre is only for permanent residents.

From Springerville a short ascent is followed by an about 5 km long descent. In Nutrioso is a shop/cafe. It might be possible to camp there. After that there is another climb to a pass of 8550 ft / 2600 m. Immediately after the pass is the Alpine Divide Campground. The village of Alpine follows later at 8050 ft / 2450 m. (shop and gas station only).

From H.M. Campground it’s another 7 kilometres of climbing until the KP Cienega Campground and the highest point of 9260 ft, 2815 m. Three kilometres later you’ll arrive at the Blue Vista Viewpoint (9184 ft., 2790 m). The next 7 km is steep downhill; after you’ve passed the Stray Horse Campground it is not as steep anymore, but the next 12 km is still going downhill. Then there is another 7 km of climbing to Rose Peak. After crossing a large plain (you’ll see the first cactusses) you’ll have to climb again to Grays Peak before the very narrow and winding road starts to descend into the canyon. In the canyon is the Granville Campground.

Once out of the canyon follows a spectacular hairpin descent. Unfortunately soon after this the largest open pit copper mines of the United States comes into view. The villages of Morenci (4000 ft., 1215 m) and Clifton (3500 ft. / 1063 m) have limited facilities. There is a campground.

At the junction of the US 191 with US 75 and 78 are some restaurants and a gas station. From the junction it’s some 12 km to the top, the first 4 or 5 kilometres are steep. Down a wide road with shoulder it’s a long way down to Safford! Just south of Safford is Roper Lake State Park with great camping facilities.

To the Interstate 10 you cross some foothills of the Pinaleno Mts. Then it is a slow descent to Willcox. Cycling on the Interstate is not dangerous (we even saw a sign ‘ bicycles use shoulder’), just boring and noisy. The only campground for tents is the noisy KOA, right on a exit of the I 10.

The US 186 is nice and quiet. Apart from a minor climb to the ghost-town Dos Cabezas the road is almost level. This village is not a real ghost-town: you can buy a cold drink and food here. From the turnoff to the NM it is another 8 km to the campground and another 8 km to the highest point of 6870 ft., 2088 m. The Visitors Centre is on 5400 ft, 1641 m. Just outside the NM is the El Dorado Trading Post with basic supplies. 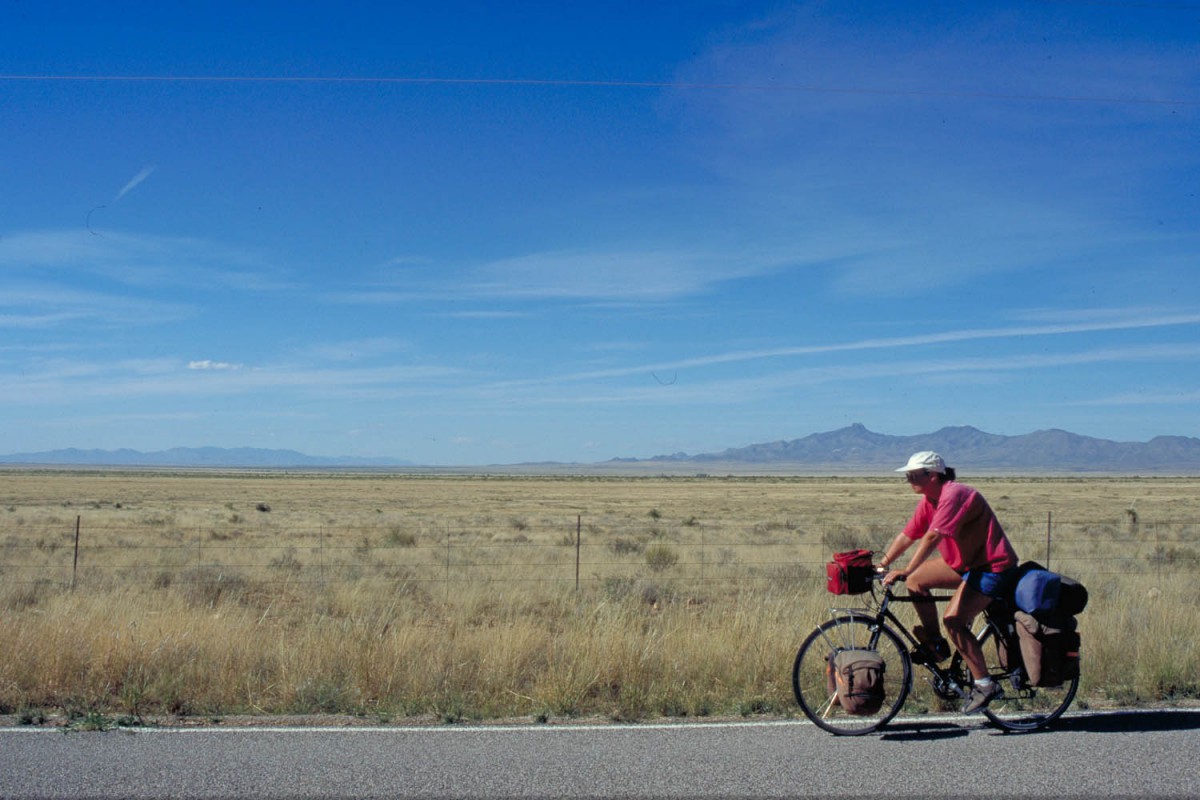 143 km The landscape consists of flat grassland. Sunizona is the first village after CNM. You can camp at the Roadrunner RV Park (watch out for flat tyres!). There is also a motel and a good supermarket in town. About 25 flat kms to the south is the village of Elfrida (motel and shop, no campground).

Going to Tombstone you follow a paved road that first turns south and later more in western direction, while climbing out of the valley slowly. Tombstone is a real tourist trap. There are two small shops and a KOA campground.

From Tombstone you cycle downhill to the San Pedro River. After 16 kilometers you arrive at the village of Whetstone (shop) at the crossing of the US 90 and the US 82.

From here you’ll cycle upstream through the Rain Valley. No shoulder, but also little traffic. Once over the top you’ll soon see Sonoita. There is a shop, but no campground or motel.

12 km to the south is the turnoff to Patagonia Lake State Park Campground. It’s 6,5 km to the campground with a lot of short steep climbs!

The city of Nogales is about 42 km south of Patagonia. It’s easy to cross the border to very touristy Nogales Mexico.

Most maps show only an interstate between Nogales and Tucson. Parallel to the interstate there are several frontage-roads where cycling is much better than on the shoulder of the interstate.

In the vilage of Amado there is excellent camping at the former KOA campground. Hot showers, swimming pool, laundry and shop.

Follow in Green Valley the main road west of the interstate. You’ll cycle on a separate lane for cyclists and golf-carts! Continue untill the T-junction with Helmet Peak Road. Cycle in western direction; the road climbs about 8 km out of the valley. Once you are at the top you are on Mission Road. Follow this road in northern direction.

It is more than 20 km to the famous mission church of San Xavier del Bac When the weather is clear you can see the white church from a long distance. It’s downhill all the way. When you want to avoid Tucson follow Mission Road in northern direction and turn west at Ajo Way. 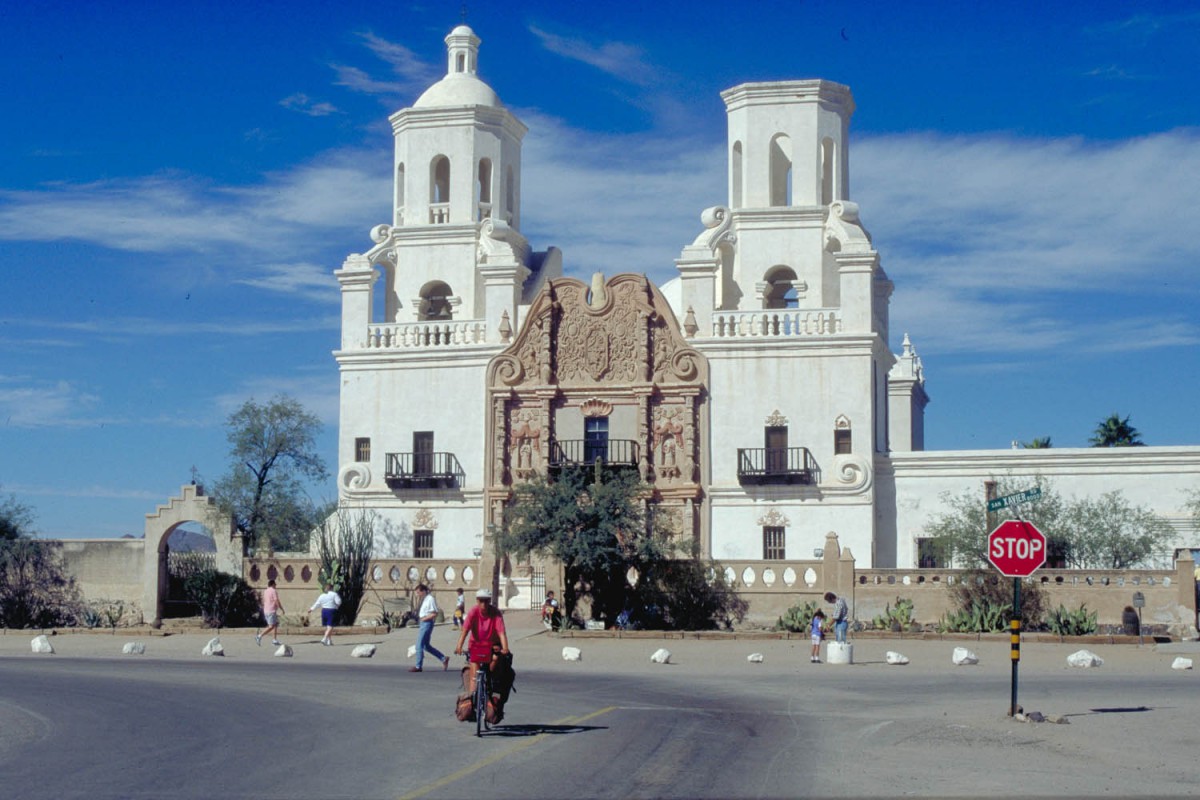 Coming from the Saguaro National Park you can cycle to Tucson city by leaving the park in the north on Picture Rock Rd and Contzen Pass. Thes are dirt roads through the park and the quality of the surface changes often. In ‘West’ Tucson you’ll arrive at Ina Road.

Lots of fast driving traffic on this road; no shoulder. After a while you’ll come to the crossing with Oracle Rd. From here you will leave the town in northern direction. The road is 4 lanes with shoulder. Catalina State Park is a nice place to camp.

From here back to Phoenix it’s more or less downhill all the time. The Casa Grande National Monument is worth a visit when you pass through Coolidge (no camping, motels available). To Phoenix just follow the traffic. There are some ‘bike-routes’ through the city, but these don’t seem to be connected.