We used a printed map (Nelles scale 1: 775.000) for overview only. The distances on this map are not very accurate.  We mostly navigated using the Open Streetmap on our Garmin Dakota 20 GPS or using the same map on our Android smartphone (OSMand and Maps.me are recommended free apps). Signposting outside cities is scarce. You can ask and check with the locals. 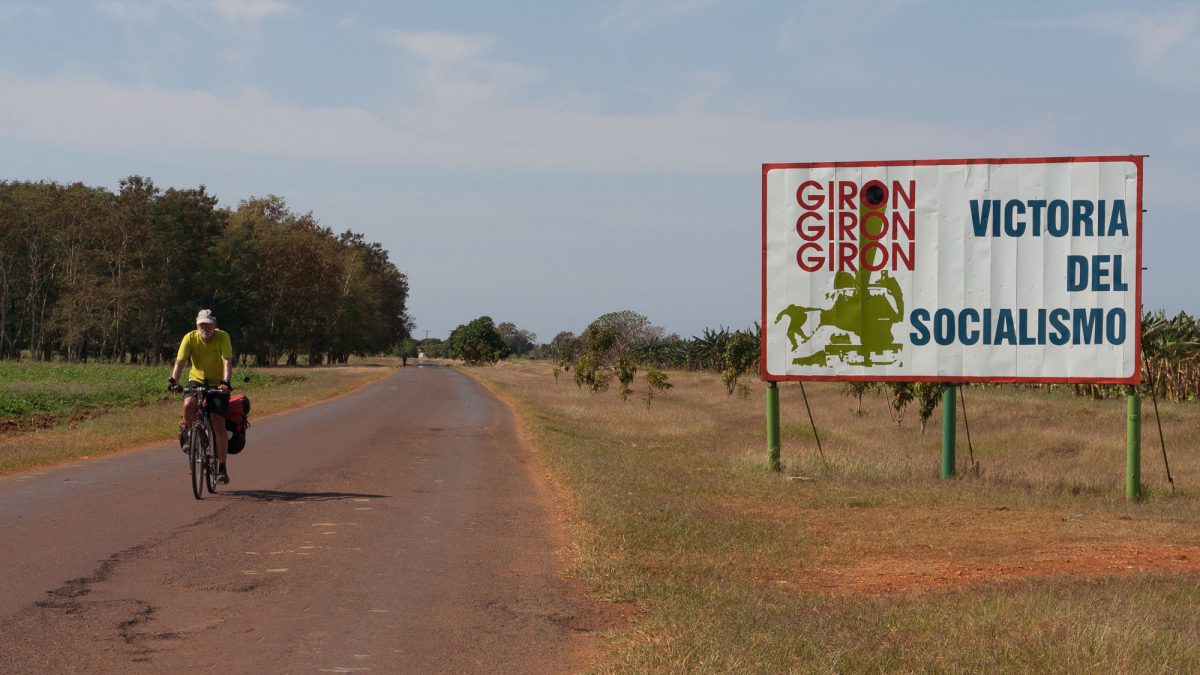 There are plenty of signs in Cuba. But they only point in one direction 😉

In tourist areas such as Havana, Viñales and Trinidad are always some people who speak English. Outside those areas it’s useful to speak at least some Spanish. Or use Google Translate. Tip: it’s also available off-line.

When preparing this trip we read that traffic in Cuba is like on the English countryside in the ’40s.  Although it is getting busier every year, mainly due to the increase of tourism, it’s still a cyclists heaven on the quiet roads of Cuba.
Even on a full day riding the Autopista we did not encounter a lot of cars and trucks. Our fellow road users were more often than not horse carts, ox carts , cyclists, motorcyclists and tractors rather than trucks or cars.
All the main roads are tarmac, but the quality can be anything from fine to horrible. 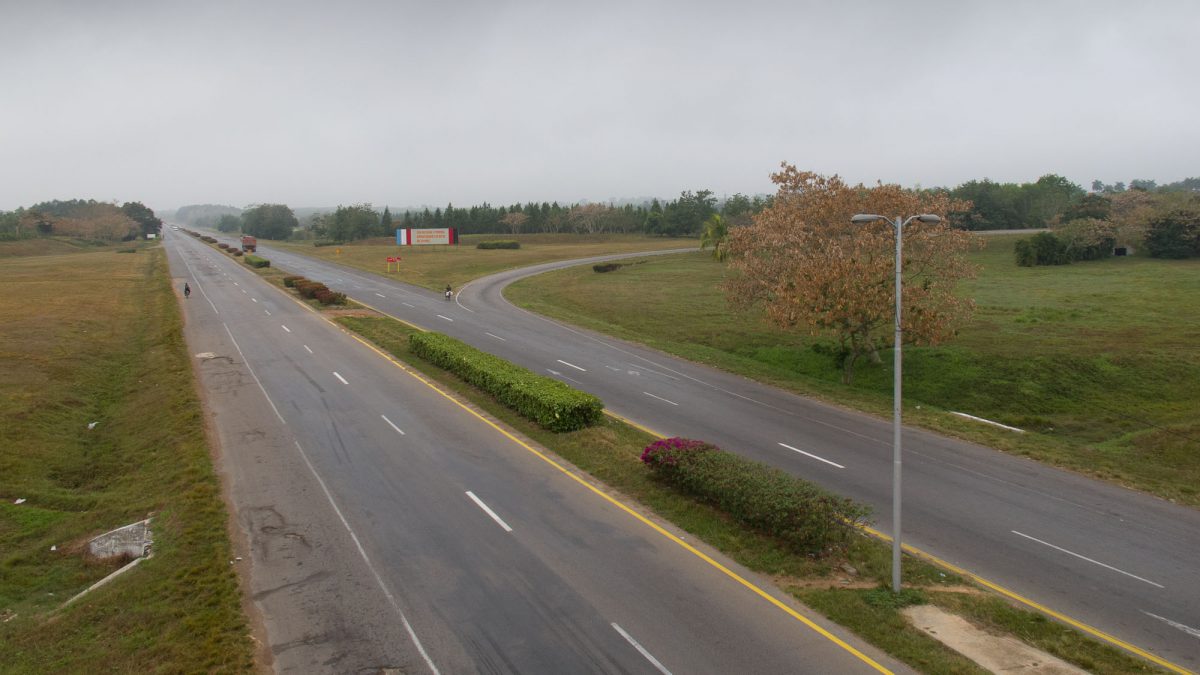 The Autopista near Soroa 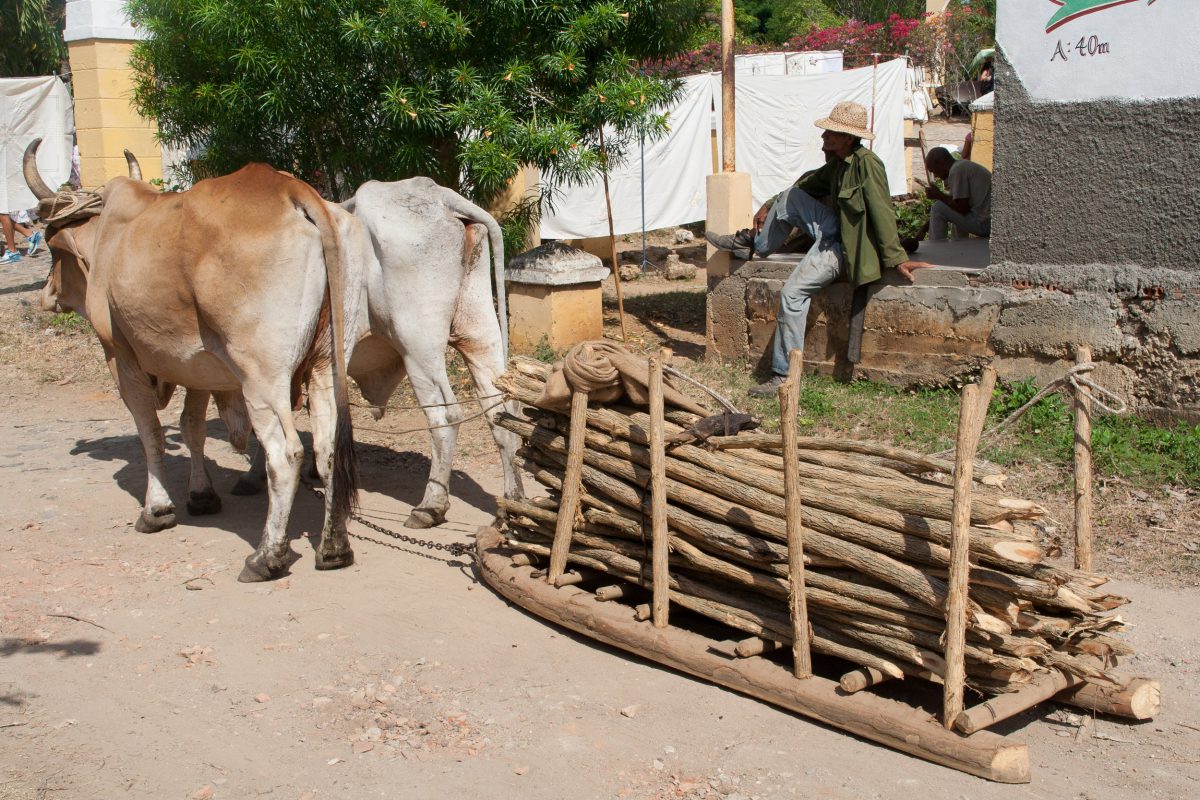 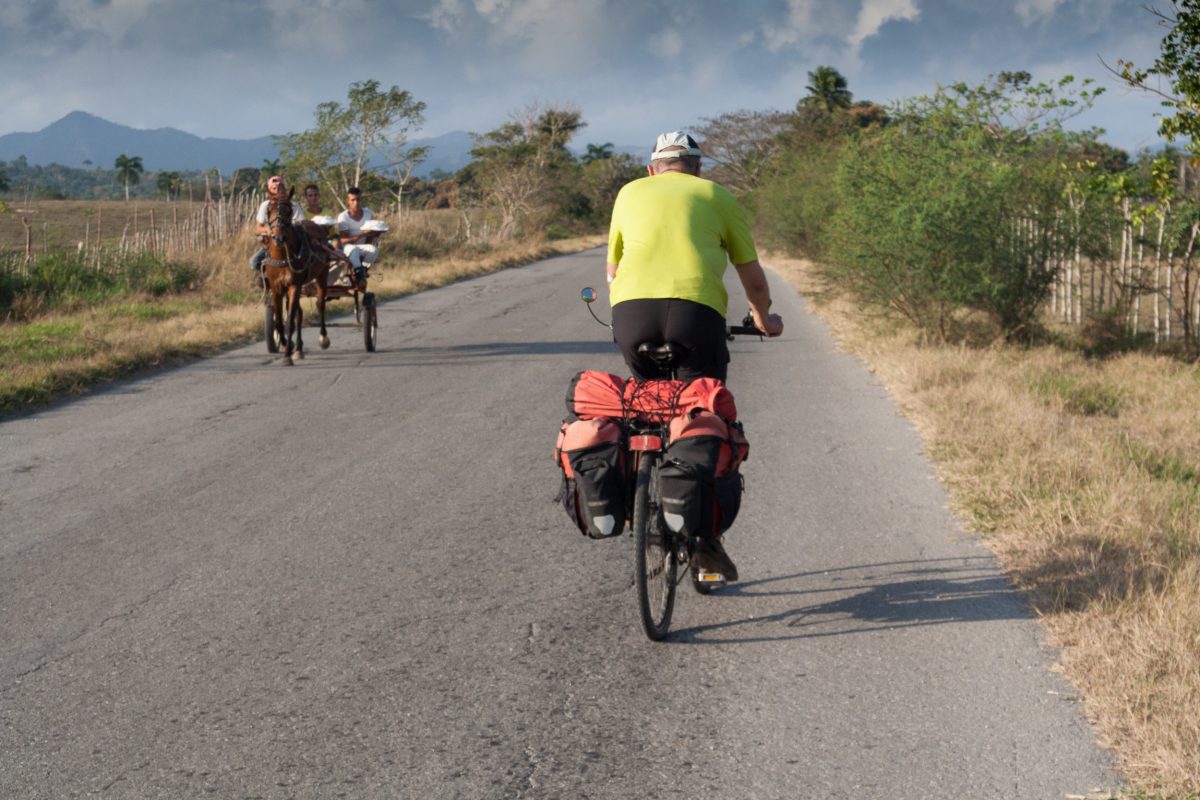 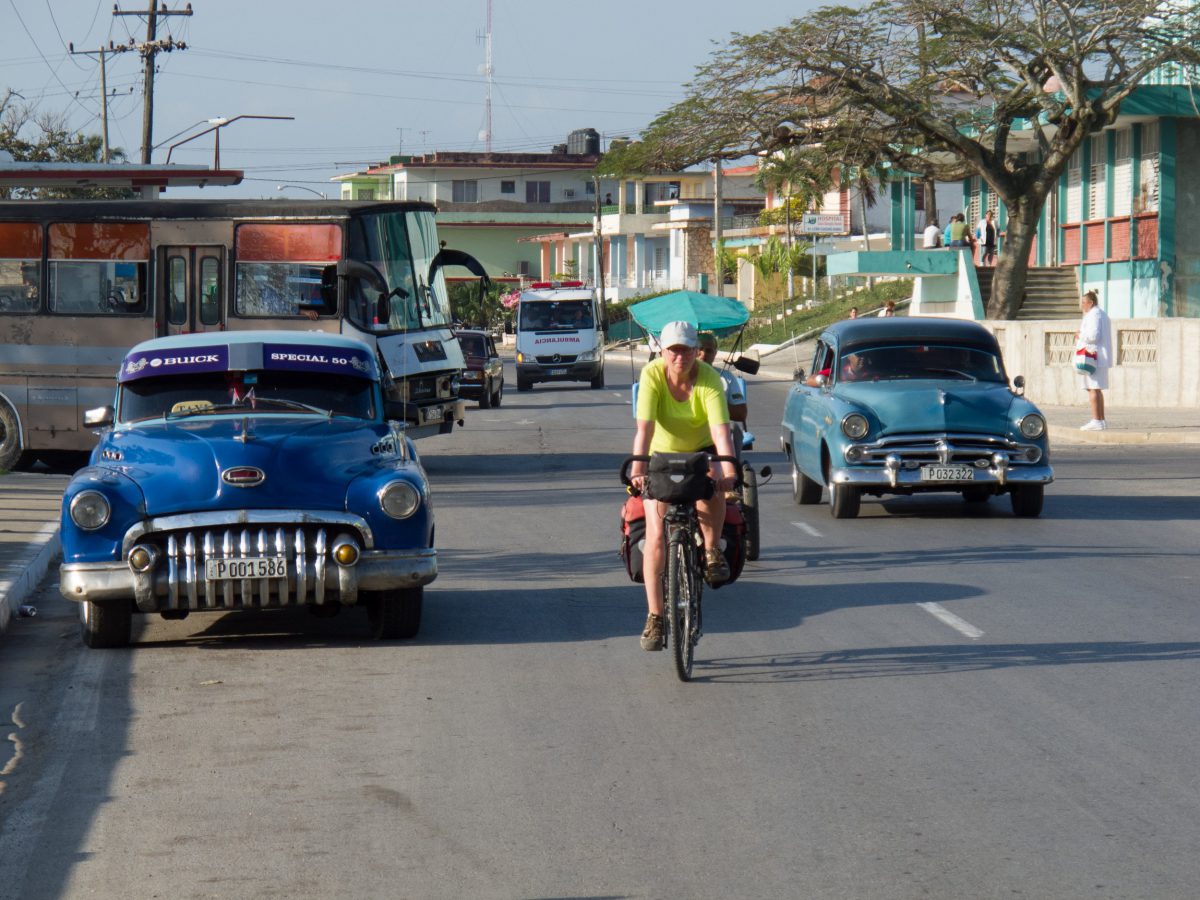 the famous oldtimers are still on the road 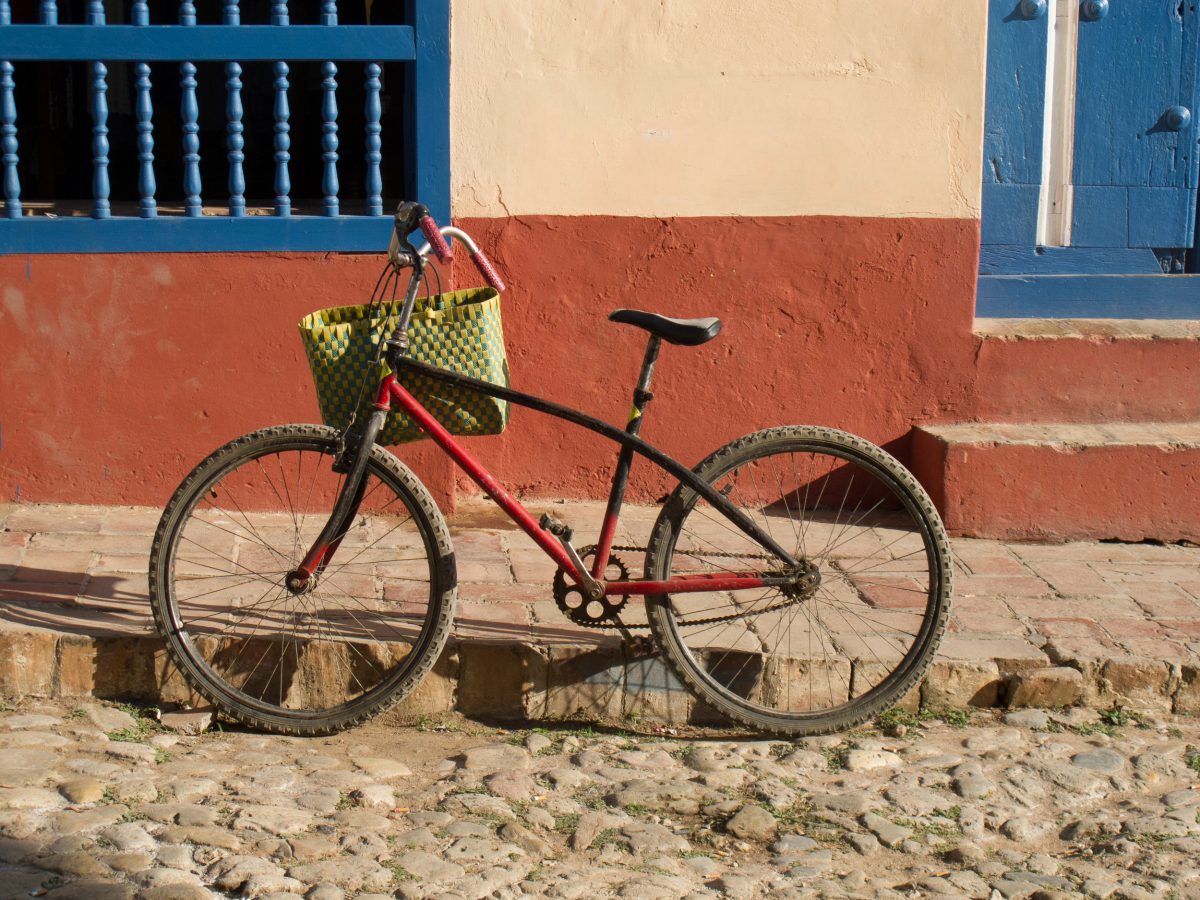 In the larger cities water is heavily chlorinated. On the countryside water is not always reliable. We drank mineral water, which is widely available. Or we used our water filter. Cold soft drinks (Cuban Cola) are for sale everywhere.
We used breakfast and dinner mostly in the casa particulares where we stayed. The quality was far better than in the state run hotels and the portions huge. Another advantage: they cater for vegetarians without problems and often very tasty.
For lunch we bought some bread in one of the local bakeries (panaderia). After asking who’s the last in line (“el ultimo?”) you wait for your turn. Change is always in local money and sometimes you are not allowed to buy bread, the bakery only provides for the local ration. 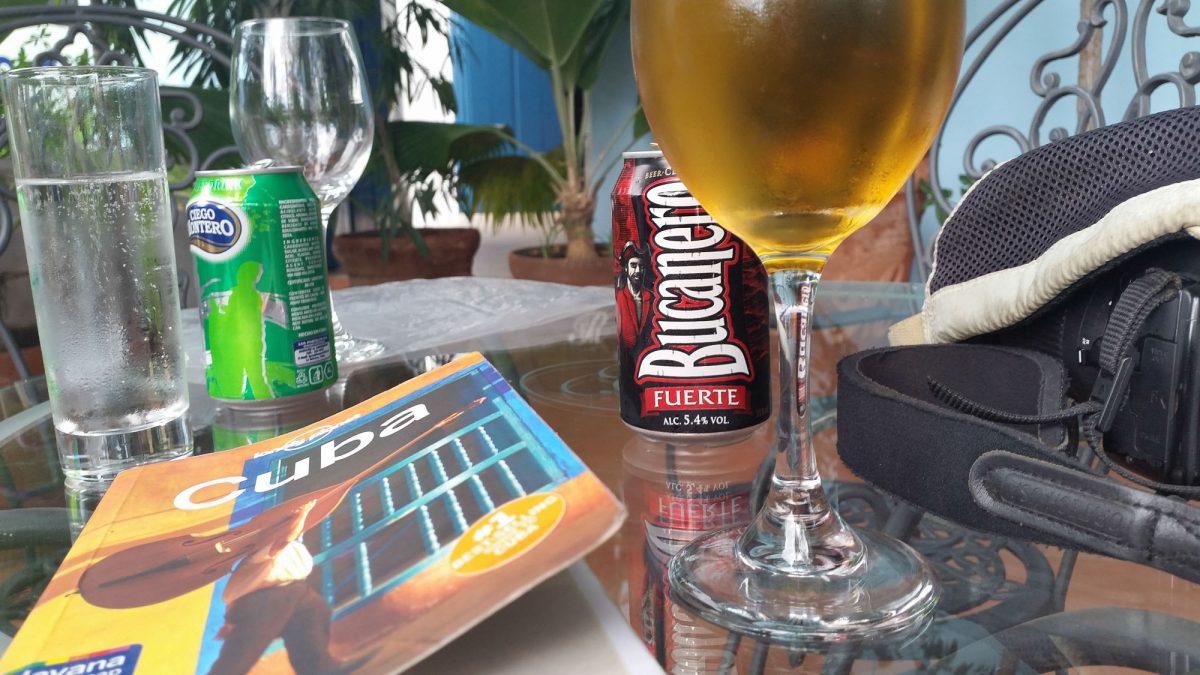 Local beer such as Bucanero and Cristall are widely available 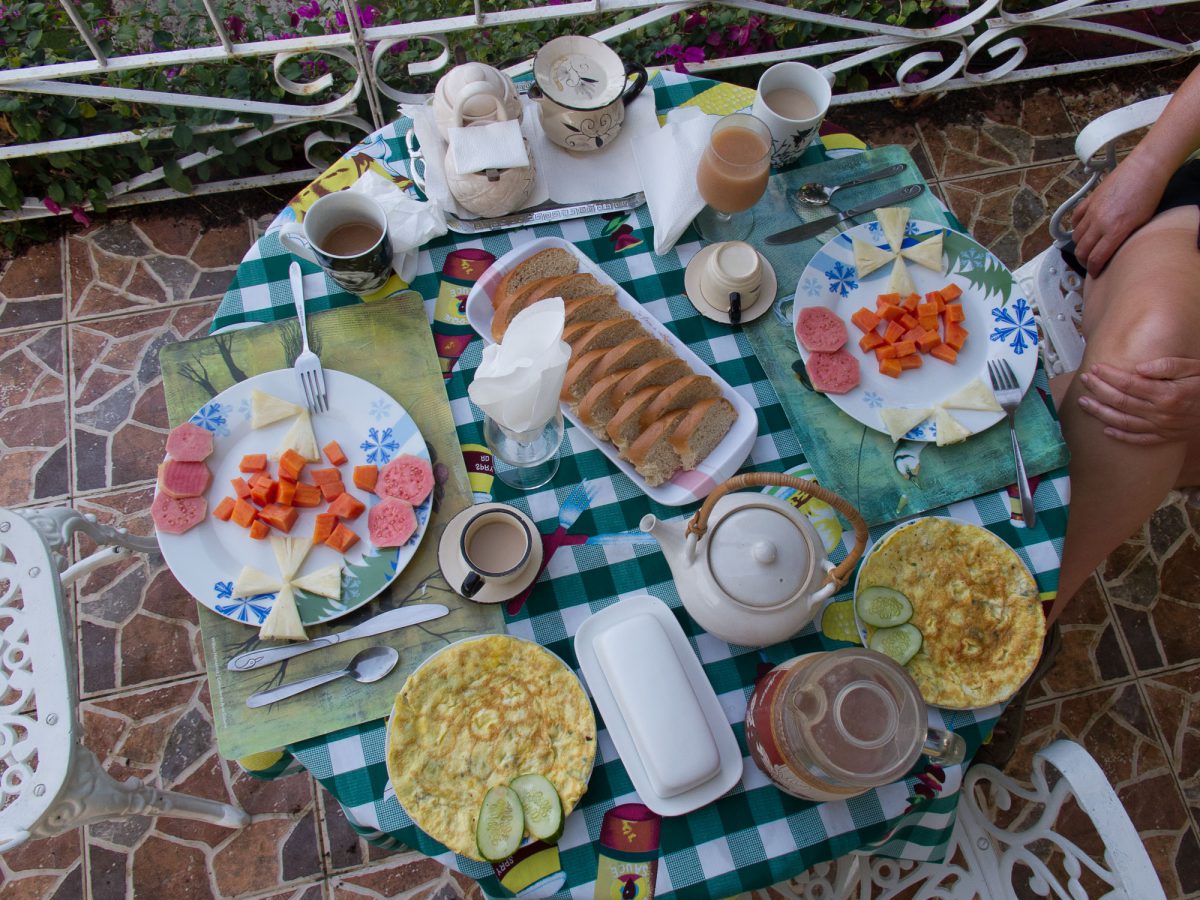 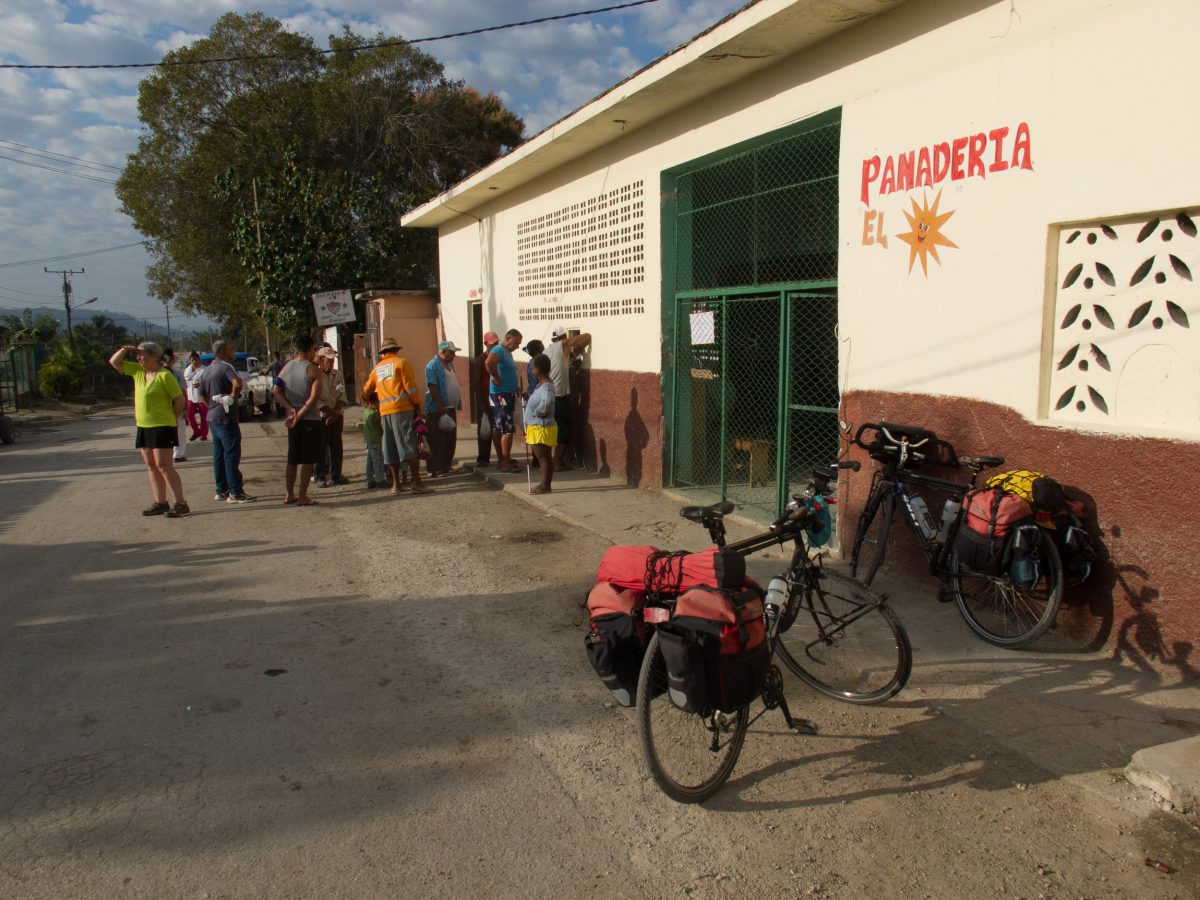 panaderia in a village 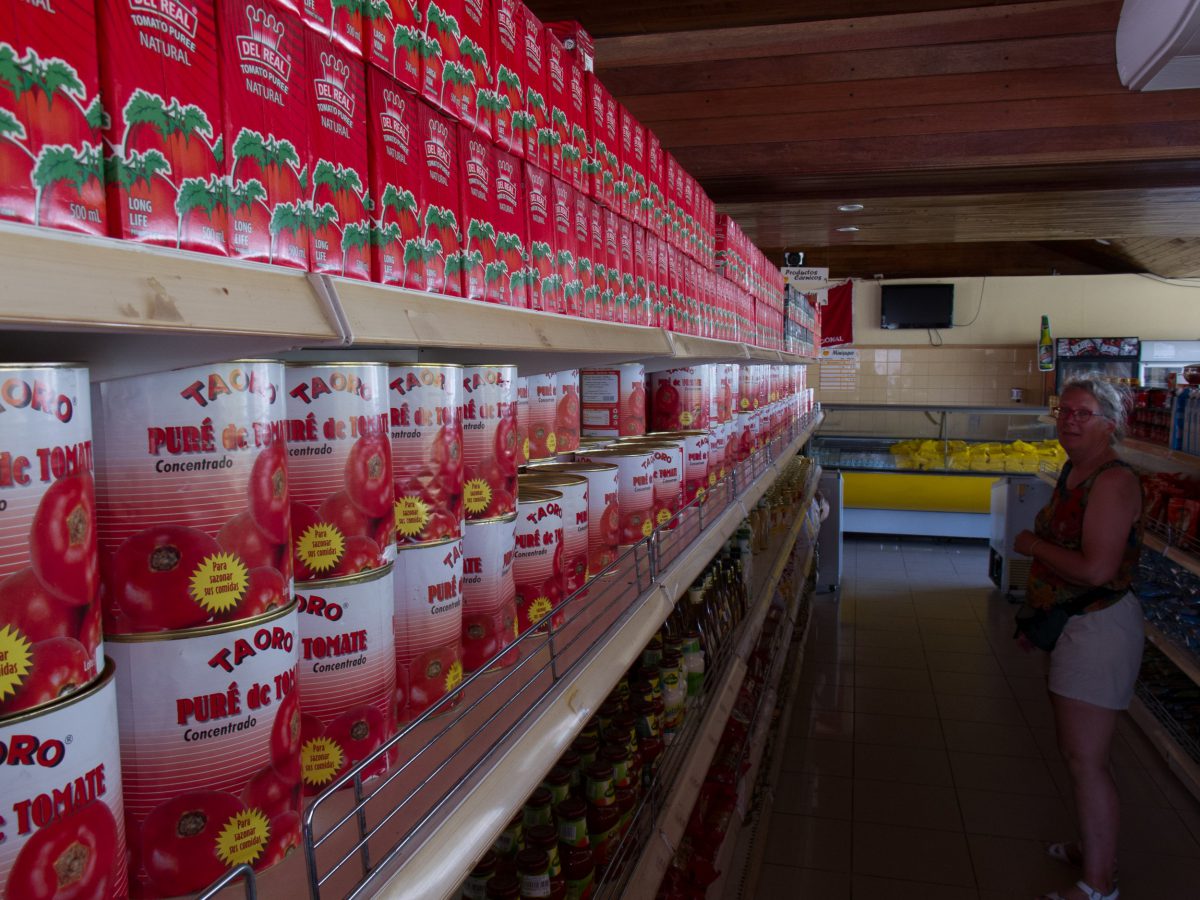 Most of the days we had hot and sunny weather with temperatures above 30 degrees Celsius. Some days were even hotter with 35-38 degrees Celsius in the shade. It rained on two afternoons, and it rained a lot! Major advantage: the following days were cooler. 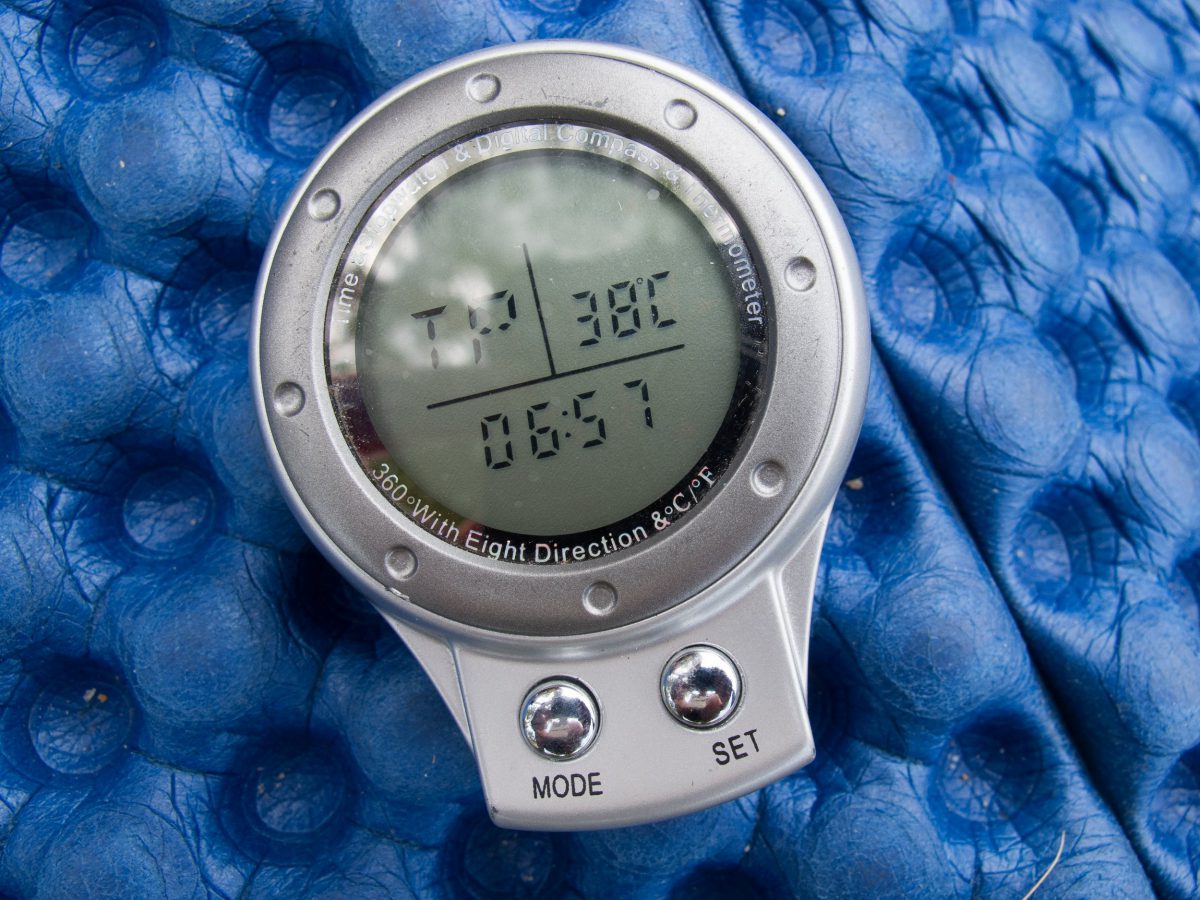 38 celsius in the shade

Most nights we stayed in a casa particular. A casa particular is a bed & breakfast with normally one or two rooms and provides meals as well. These rooms were always good and often excellent. Besides a bed and private bathroom, it almost always contains airconditioning, and often a fridge and television. A few times we stayed in hotels where we got undoubtedly less value for our money. Our Google Map shows the locations of all casas and hotels we stayed.
We didn’t bother to bring our tent, as there are no campsites in Cuba. Finding a suitable spot to pitch your tent is difficult and officially forbidden.
Except in Havana we made no reservations. In some places it took some time to find a casa with vacancies. Official casas carry the blue Arrendador Divisa sign on their front door. Note: the orange coloured version indicate casas with rooms only for rent for Cubans. 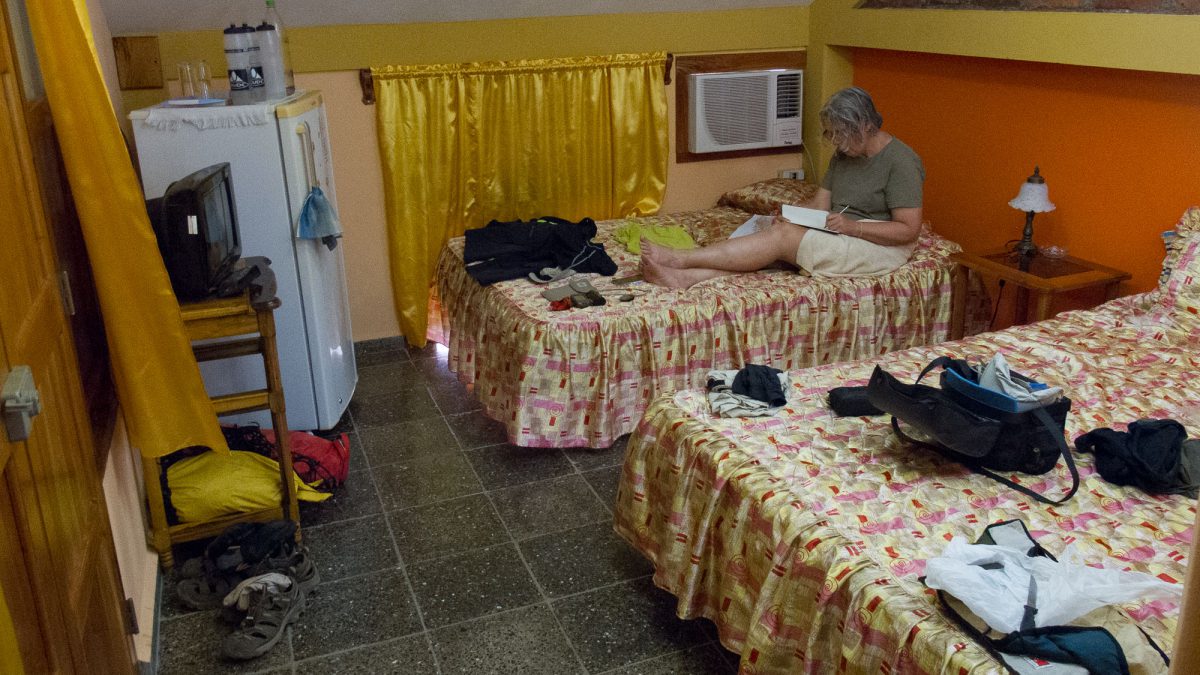 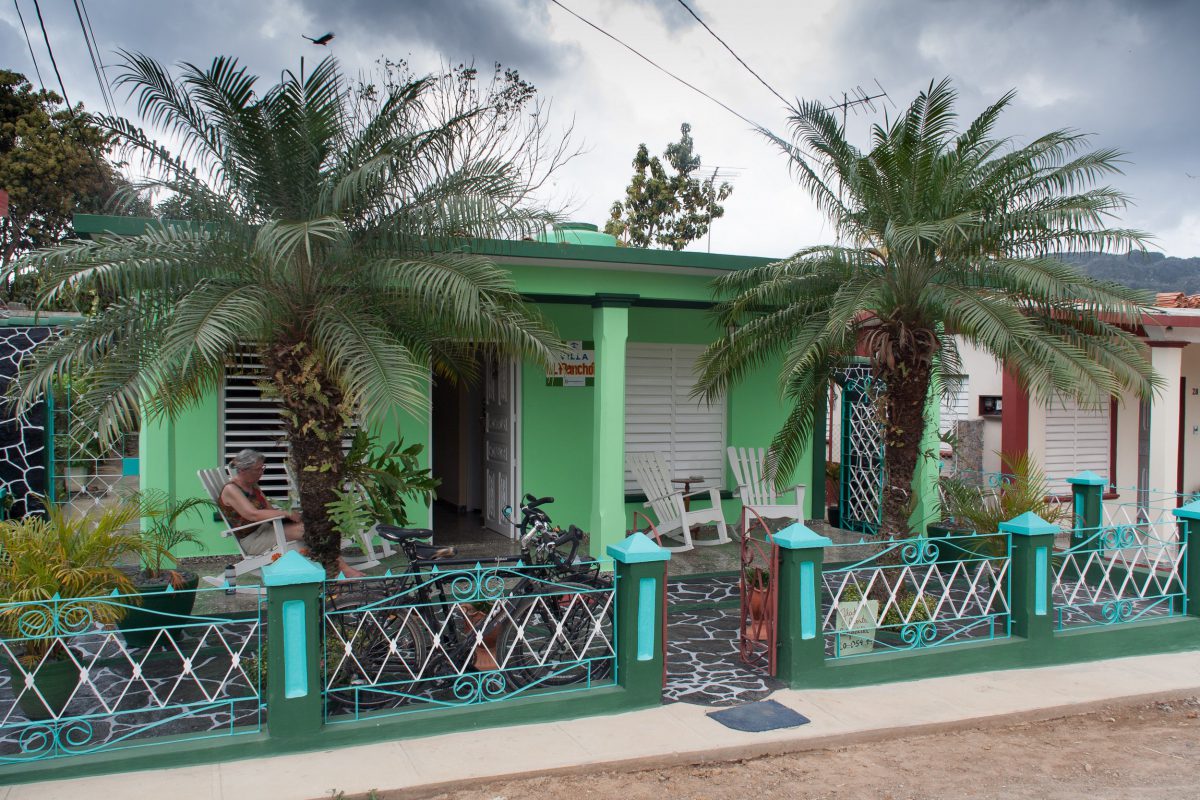 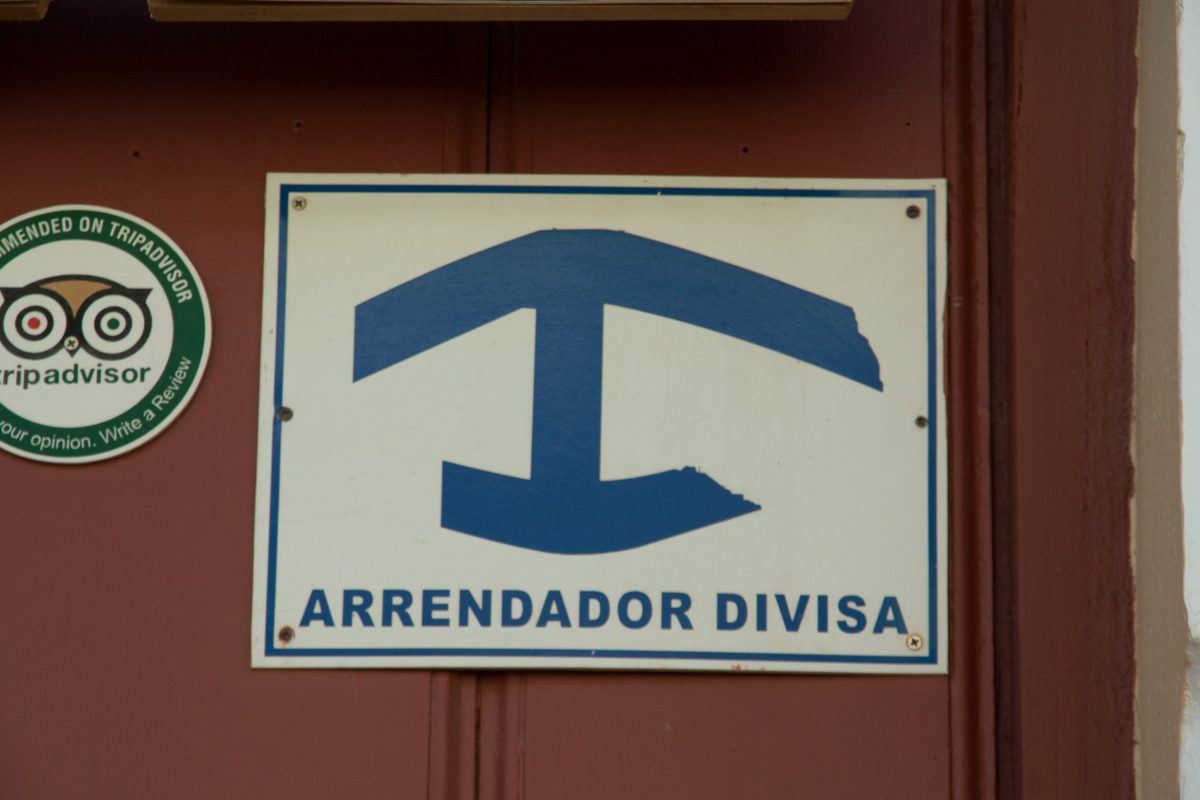